Spanish homes in the hills

Spain might be best known for its beaches, but it’s also the most mountainous country in Europe. While few of our readers are looking for a house right on top of a mountain, the foothills and valleys offer a wonderful choice of natural and affordable locations for property buyers.

Moreover, given Spain’s huge spending on roads and infrastructure over recent years, it’s easy to travel from the coast to the mountains quickly when you want that Mediterranean dip!

To understand just how mountainous Spain is, consider this: the UK’s highest peak is Ben Nevis at 1,345 metres. England’s highest doesn’t even reach 1,000 metres. Spain, meanwhile, has 40 peaks over 3,000 metres! It has dozens more over 2,000 metres.

The mountains are spread throughout the country and its islands too. Wherever you go, you’ll probably have a row of mountains as a beautiful back drop.

The Pyrenees separate Spain from France and are among the most spectacular mountains in Spain to look at it. The Garrotxa foothills of the eastern Pyrenees are close to Girona Airport, while the Costa Brava is just an hour’s drive away. Barcelona is less than an hour and three quarters’ drive. 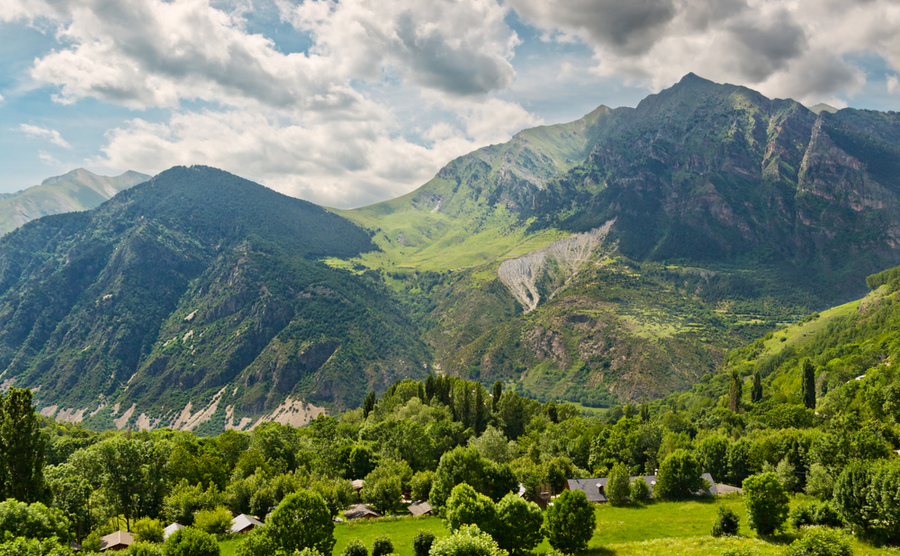 A home in the Spanish mountains, Taull, Catalonia

For adventurous types, you can find easy hiking, climbing or mountain biking amid dormant volcanoes, lovely woodland, little streams and higher up, rocky gorges. The area is truly unspoilt and particularly pleasant in spring and autumn: perfect for simple pleasures like mushroom hunting. In summer it gets a little more crowded, especially among the many medieval villages. Here you’ll find excellent, modern and traditional restaurants as you wander through the cobbled streets.

All winter sports are popular, with a dozen or so good quality ski resorts, especially around Andorra. One of Spain’s best kept secrets is the Val d’Aran and in particular the ski resort of Baqueira/Beret in Catalonia, with 33 ski lifts and 120 kilometres of pistes for all levels of skiers.

Where to buy in the Pyrenees

The picturesque village of Santa Pau would be a good place to start house hunting. It has a 13th century main square which is lined by stone arcaded buildings. There are good hotels and restaurants in the village to make viewing here extra pleasant!

You’ll find attractive country houses here, often with large parcels of land, from under €200,000, although €300,000 is a more reasonable budget.

When you buy in Spain, Smart Currency Exchange is the specialist in currency and money transfers for property. Read The Property Buyer’s Guide to Currency here.

Another example of an attractive mountain village is Besalù. Steeped in history, you approach it over an 11th century bridge, complete with turrets, straddling the Fluvià river. Hidden in its cobbled streets is the old Jewish quarter, with one of only two preserved Mikvah baths in Spain.

Puigcerdà in Catalonia is a delightful mountain town of around 9,000 people, right on the French border. One bar is noteworthy owing to a tree which is growing inside. Town-centre apartments start at around €100,000, townhouses at under €150,000 and detached country homes at €200,000 to €250,000. 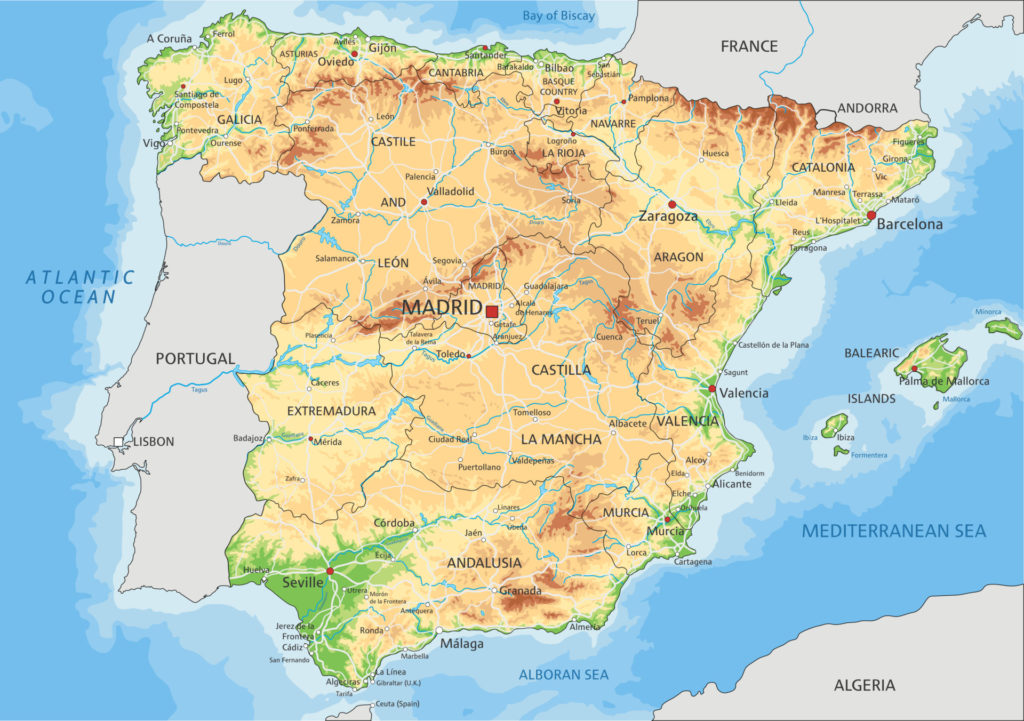 Also in the north, the Cantabrian mountain range stretches westerly from the Pyrenees all the way to Galicia. Most famous are the Picos de Europa, although they’re a small part of the 300km range. The mountains were named the first national park in Spain in 1918.

These areas of northern Spain are easy to reach by car or ferry, for those turning against frequent flying for ecological reasons

These days they’re more famous as the constant companion for those doing the 780km “Way of St James” to Santiago de Compostella. If you like a slightly shorter mountain walk, there is a lovely route along the Ruta del Cares. This has spectacular views but takes around four hours compared to around 30 days for the Camino Santiago!

One advantage of these areas of northern Spain is that they are easy to reach by car or ferry, for those turning against frequent flying for ecological reasons.

Where to buy around the Cantabrian Mountains

You have a choice of buying on the northern side, by the sea, or the southern side. The coastal strip is known as the Costa Verde, “green Spain”. It certainly does get wet, but is also well-known for the quality of its surfing too, in seaside towns like Llanes and Mundaka. 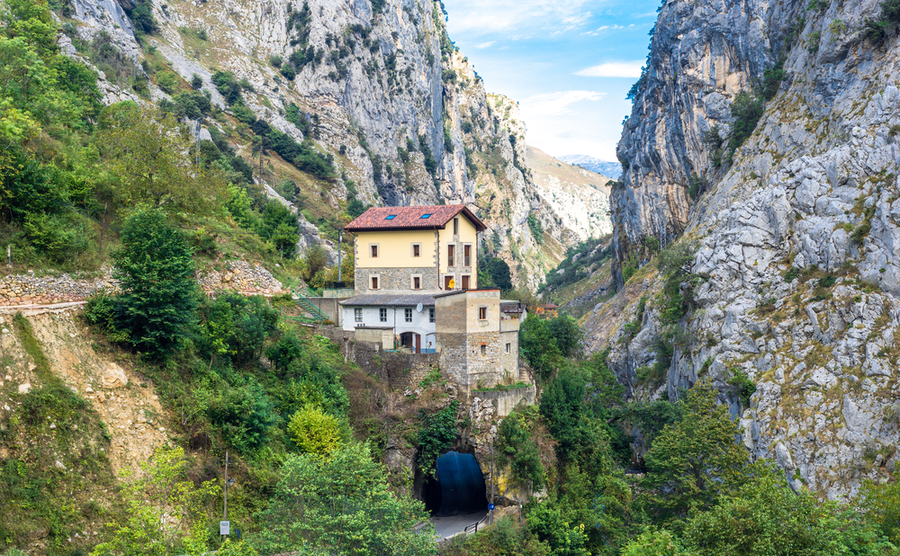 The southern side is in the ‘rain shadow’ and receives far less rain. The mountains here see far fewer tourists and have a distinctly rural and traditional feel. But they are wonderful place to buy a country home, and very affordable.

Oviedo, the capital of Asturias with a population of around 220,000 is a relatively popular area for international buyers. You can buy very attractive rural homes here from around €150,000, with a bit of land (and plenty of rain and warmth to grow things!).

Perhaps the best-known mountain range in Spain is the Sierra Nevada. It’s in Andalusia, dividing the Costa del Sol from the plains of inland Spain. The mountains run for around 80 kilometres, eastwards from Malaga towards Almeria and reaching their peak with the 3,478 metre Mulhacén, mainland Spain’s highest point.

You can ski here, based around Pradollano, with over 106 kilometres of runs and all the usual extra activities, ski schools, snow rides and apres-ski. The ski slopes are around a 45-minute drive from Granada and 90 minutes from resorts like Almunecar and Nerja. 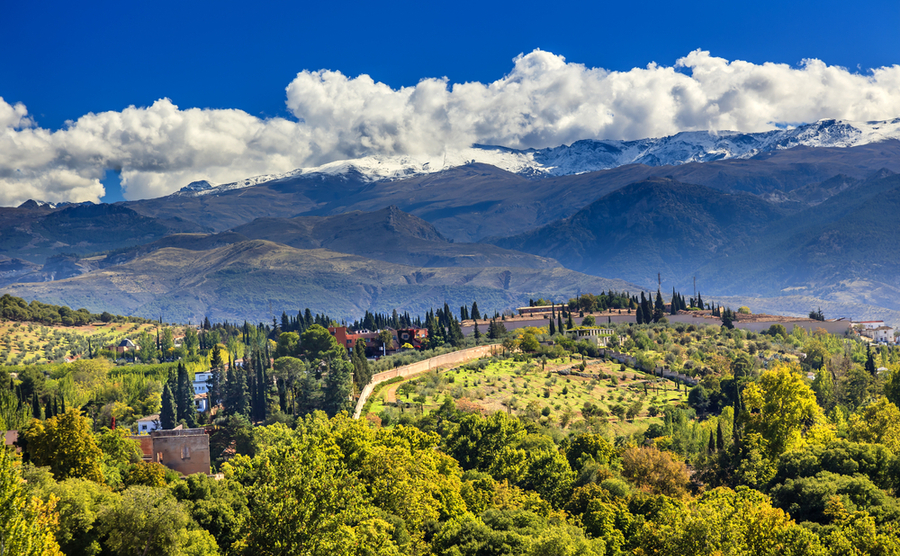 The foothills of the Sierra Nevada are filled with almond and olive trees and are beautiful to look at, while the mountains themselves are rugged, with steep gorges, fast running rivers and lakes. The area has a wealth of wildlife, including ibex, genets, wild cats and golden eagles.

To the western side of the Sierra Nevada is the Sierra de Tejada, now a “natural park”. A Mediterranean woodland clings to the higher slopes with mainly oaks and pine trees. Many herbs grow wild here while eagles circle above and woodpeckers tap the trees.

The Sierra in culture

The mountains and the face of Spain they present – so close and yet so different to the costas – has fascinated many British residents. Read Sacred Sierra: A Year on a Spanish Mountain by Jason Webster. It is an interesting and funny book about the experiences of a towny who moves to a craggy mountain in the province of Castellón.

Chris Stewart, of the Driving over Lemons series, set up home in a beautiful valley of Alpujarras, on the southern side of the Sierra

A similar “bewildered-but-fascinated-expat” story is that of Chris Stewart’s Driving over Lemons series. He set up home in a beautiful valley of Alpujarras, on the southern side of the Sierra. It gives a funny and warm-heated (but realistic) account of life here.

Where to buy in the Sierra Nevada

There are dozens and dozens of villages of varying sleepiness along the Sierra. Virtually all of them have a little community of international residents. But not just British; there are plenty of Scandinavians, Americans, Germans and French here too. Together, they have helped to revive villages manly of whose young people has moved to the cities and coastal resorts. 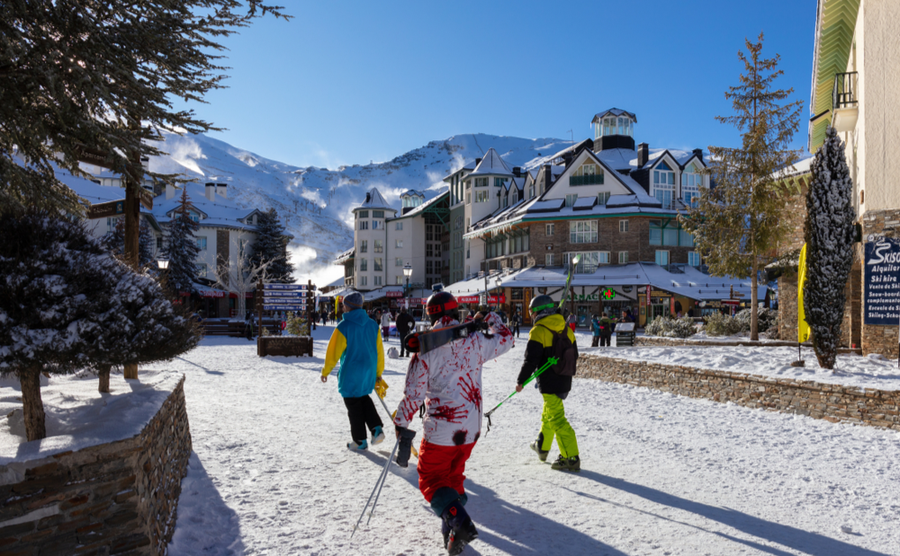 There are pretty pueblos blancos, white villages, amid sheltered, terraced valleys. One of the prettiest villages is Pampaneira. The main square, Plaza de Libertad has numerous bars and restaurants. Nearby is the Buddhist Monastery of O Sel Ling, a quiet retreat for meditation.

When Chris Stewart first arrived in the 1980s, farmhouses could be picked up for £10,000. These days you’ll pay a little more, but prices are still extremely good value compared to the coast. As little as €50,000 can bag you a pretty little village house, and for €150,000 you can buy a spacious property in small towns like Lecrin or Orgiva.

Further west, towards Malaga, Alcaucín is also very pretty. It is just 25km from Torre del Mar on the coast and 56 minutes drive from Málaga airport. To get an idea of the local flora and what people do for fun, enjoy the chestnut festival every October! A budget of €350,000 buys a three-bedroom property with splendid views. But you can get a nice town house here for little over €130,000.

If buying in rural areas it is essential to use a good property lawyer. Contact us to be put touch with a trusted solicitor.

The jewel in Mallorca’s crown, according to local people, Mallorca’s 90-kilometre-long northern mountain range is certainly beautiful. It’s now a designated UNESCO world heritage site. Its highest peak is 1,443 metres, gradually sloping down towards the centre of the island and filled with olive groves, vineyards and pine forests, terraces and wild flowers. 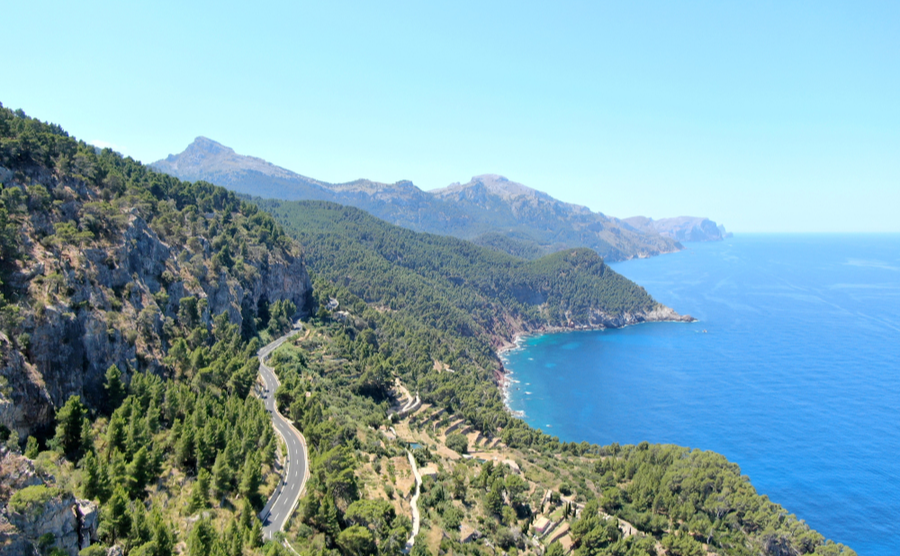 Some of Majorca’s loveliest towns are to be found in this part of the islands. The most famous are Valldemossa, Sóller and Deià. They used to attract artists and writers – such as Robert “Goodbye to All That” Graves – although these have largely been priced out and replaced with film and sports stars and supermodels!

There is lots of opportunity for country walking and cycling, through the orange and olive trees and lush orchards. With a population of 13,000, Soller is a fair size and with all amenities. There are also a wonderful old wooden train to Palma and a tram to the sea. Definitely not a cheap area, a two-bedroom country house with garden will cost at least €300,000 and anywhere up to the millions of Euro.

In Tenerife, the Pico del Teide National Park includes Spain’s highest mountain, el Teide. It hasn’t erupted since 1909, and the surrounding area is a Spanish National Park. Like several of the Canaries, especially Lanzarote, the landscape is full of craters and petrified lava. 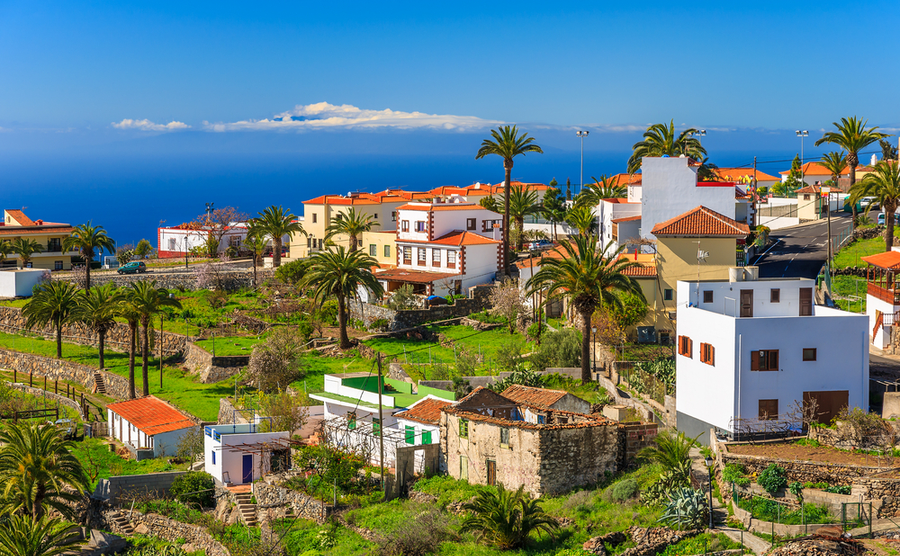 The foothills are lush and green, especially in the north, with plenty of activities such as biking and walking, only an hour away from Tenerife South Airport. Santiago del Teide is a pleasant town with a population of over 10,500 and a good place to look for property. Expect to pay around €160,000 for a two-bedroom apartment and substantially more for larger apartments.

The smaller Canary Island of La Gomera also has craggy volcanic mountains covered on the upper slopes by thick forests in the Garajonay National Park. All the mountaineering activities are available close to sleepy villages and steep terraces where you feel you are in another world. The national park is just 22 minutes’ from the island’s main ferry port as you can’t reach La Gomera by plane