Travel and transport – getting around in Spain

Spain is extremely well connected both internally and internationally. With 16026 km of train tracks and 17228 km of high capacity roads, it is pretty easy to get anywhere. Its many ports link Spain to Africa, Europe and the rest of the world. Spain also has 59 airports, most of them with flights to Europe and the larger ones with flights to the US and beyond.

Until recently, most motorways were financed by a toll system but the current government has been doing away with these, so for now most are toll-free. However, there are plans to introduce a more modern and effective payment system within the next few years.

Spain also has a system of identifying the amount of pollution a car emits in the form of a sticker you place on the windscreen. Certain older cars are prohibited from entering city centres. You can obtain the sticker from the post office (oficina de correos) for around €5.

The laws behind driving in Spain, and police are vigilant.

The laws behind driving in Spain are strict, and police are vigilant. Driving offenses fall into three categories: minor, serious and very serious.

Speed cameras are very common, and the following limits apply as of December 2021:

There are speed cameras on most main roads. The use of these cameras is on the increase and drivers of foreign cars can be fined on the spot if caught speeding. For drivers with Spanish licences, speeding fines vary depending on the severity of the driving offence and points can be deducted from your driving licence, up to a maximum of 6. There is the right of appeal system in place.

Drink driving or driving under the influence of drugs are serious infractions and can result in prison sentences if a third party is injured. Testing equipment allows only 0.5 milligrams of alcohol per millilitre of blood – which is stricter than in the UK, for example, where the limit is 0.8mg/l. New drivers are effectively forbidden to drink and drive, with a very low 0.1 mg/l limit. Soon professional drivers will have to install alcohol interlocks in vehicles. These prevent driving if the driver is over the alcohol limit.

Using a handheld mobile phone whilst behind the wheel of a vehicle is illegal; ‘behind the wheel’ includes stationary at the side of the road. Only true hands free systems where the speaker is not attached to the ear are allowed. You will see many locals ignoring this law, but the police are becoming increasingly vigilant.

Principles of driving in Spain

Driving in Spain is on the right hand side. Drivers must be over 18 and in possession of a valid driver’s license. Seatbelts are compulsory in the front and rear of the car. There is certain documentation that must be carried at all times: driver’s license, passport/residency card, registration document for the car, MOT (ITV) certificate, the receipt or road tax, and proof of insurance. All cars must carry a reflective jacket for all passengers, two warning triangles, a spare type and tyre changing equipment.

The warning triangles are gradually being replaced by a magnetic flashing lamp that you place on the roof of the car in case of breakdown or accident. These are much more efficient reflectors and will shortly be required for every car. They are not very expensive, around €18 but you can find them for less.

The most important thing to remember, of course, is that in Spain you will drive on the right.

If you are driving a right hand drive car in Spain, you will need to adjust your headlights for driving on the right side of the road. You can do this temporarily with strips but if you import a car, you will need to have them properly adjusted.

There are different types of roads in Spain:

Parking regulations in Spain can be fairly complicated. Some towns have regulations stating that if it is an even day of the month, you must park on the side of the street with even numbered houses. Other towns may have streets where you must park on one side for the first half of the month then for the rest of the month it changes to the other side. This is clearly indicated on the red and blue signs which can be found along the street. In some areas it may be necessary to have a permit to park (horas laborables) during office hours. 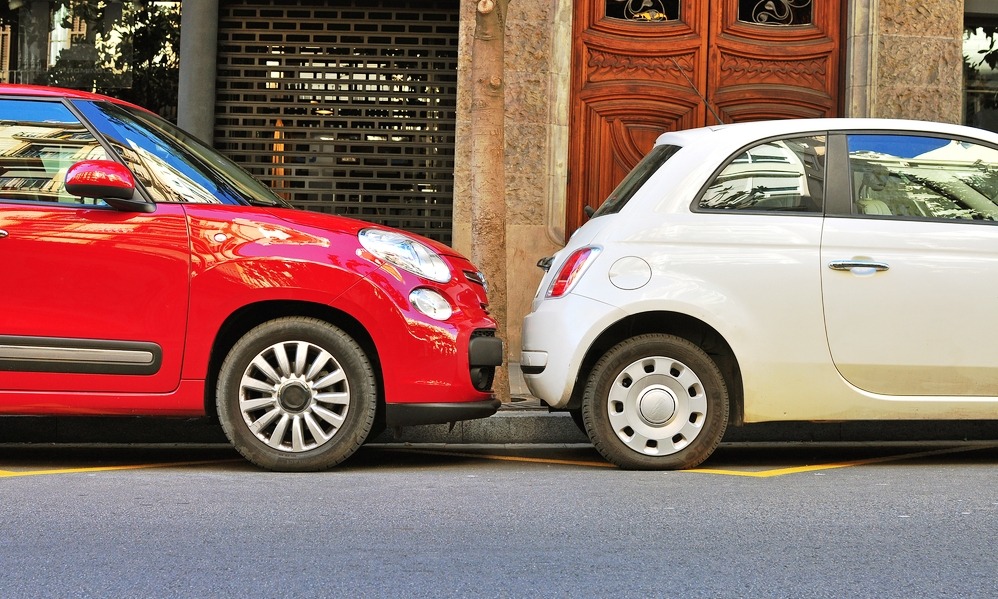 Parking regulations in Spain can be fairly complicated, so it’s a good idea to make sure you are 100% sure you can park somewhere before you do so!

In most smaller towns there are 2 street parking zones, blue (paying) and white (free). You will also find free car parks which are generally located outside the town centre but within a short walk.

City centre car parks are usually underground, and there will be a sign outside which tells you if there are spaces available. There will  be a cash desk or pay station where you can pay before you leave the car park. Cost of parking will vary depending on location but sometimes costs are displayed per minute. In some towns there is the ‘ora zone’ system and tickets for parking are sold at various retail outlets for 30, 60 or 90 minutes’ stay. No parking signs are blue with a red line. Be aware that a single yellow line is the equivalent of a double yellow line in the UK – so no parking! Regular parking fines will result in points being deducted from your licence.

Spain has an enviable public transport system which generally runs efficiently at a reasonable cost to the traveller. It includes trains, underground (metro), buses and coaches and certainly many people living here use these services rather than their car wherever possible. Smoking is prohibited on all transport services throughout the country and whilst the world is suffering a Covid pandemic, masks must be worn both in stations and on public transport.

Spain’s train network is extensive and will allow you to travel easily between all major cities. Most trains are operated by RENFE, the national railway company, which has a good online booking service in English as well as other languages. For anyone over 60, Renfe offers an annual discount card called the tarjeta dorada, which costs just €5 per year. This card allows pensioners to receive a 25% to 40% discount on all train services. Children under six travel for free and those under 12 get a 50% discount on fares. Those between the ages of 6 and 60 will, however, find that prices for travel are generally lower than in the UK.

Spain’s train network is extensive, and will allow you to travel easily between all major cities.

There are several different types of train, which could be confusing at first. The AVE (very high speed train) is the flagship service, and runs from Madrid to Barcelona, Sevilla, Málaga, Valladolid and Huesca. More stations are planned, connecting Madrid to Alicante and Valencia. The AVE also now connects Barcelona to Paris, in a journey that takes 5.5 hours from city centre to city centre. Tickets for the AVE are more expensive than for other train services, but if you book early, as you would with budget airlines, you can get good deals at most times of the year. Interestingly, you might be able to get a first class ticket for less than an ordinary ticket in the UK.

There are some new players in rail transport which has made RENFE improve some of their services. OUIGO, a company owned by French National Railways (SNCF) now has a fast and very inexpensive service running several times a day from Barcelona to Madrid. In response, RENFE has introduced a budget service called AVLO on the same route and has expanded this to other main routes such as Valencia to Madrid. More services are in the pipeline with a new night train proposed from Barcelona to Paris.

The commuter trains are called cercanias and operate in all of Spain’s major cities. RENFE runs regional train networks which are called media distancia. There are also local regional trains such as FEVE, a narrow gauge railway in the north of the country and a local service in the Basque region, the EUSKOTREN and the RODALIES de CATALUNYA in Catalonia, 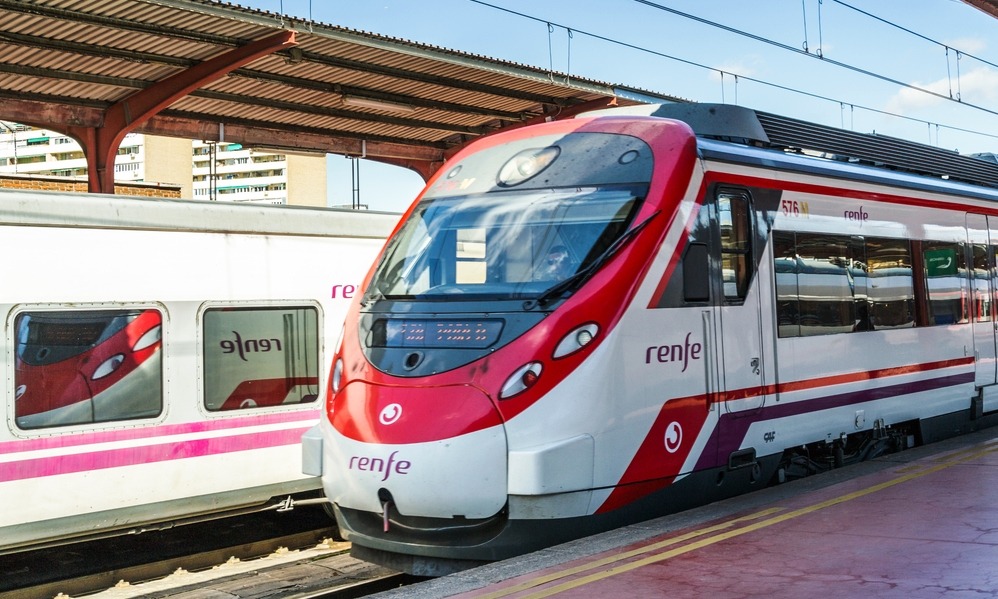 Trains in Spain are operated by RENFE, the national railway company.

Most trains are modern and comfortable, with the AVE offering a bar and snacks, or a dinner or lunch for first class passengers and sockets for charging your phone or laptop. Some of the local trains are old and somewhat basic and tend to be slower than the more modern trains.

Several cities have a metro system, including Madrid, Málaga, Barcelona, Bilbao, Sevilla and Palma de Mallorca. In general the stations are well-lit and safe with good signs for connections and metro lines.

The bus services running between cities in Spain are privately owned by different companies – each of which offers different national schedules. Information can be found at bus stations and online. Bus travel in cities, run by local authorities, is efficient, but in smaller towns and country areas these services can be rather sporadic. Generally buses in Spain are modern and air conditioned and on intercity routes are usually more expensive than trains.

The major companies include ALSA and SARFA, which covers Catalunya. A return journey from Madrid to Barcelona (621km/386 miles) will cost in the region of €24-€40, depending on time of day, and time of year.

Taxis operate in all areas, but the costs vary enormously and can be very high for a journey from an airport to a location some distance away. Taxis have meters, and are licenced by local authorities. If you can, arrange to be met at the airport knowing in advance what the price will be. Most hotels and villa or apartment owners can arrange this for you. Some larger hotels will have minibuses available for their clients. Living here, we all need a taxi from time to time but they can be expensive outside Madrid and other main cities.