What to expect when shopping in Spain

Shopping in Spain is a great pleasure, with lively shopping streets still thriving, and personal service with a smile. Even better they’re open in the evenings…

You have bought your Spanish home, the boxes and cartons have been emptied and the furniture you’ve brought is in place. Of course, you didn’t bring absolutely everything with you, and won’t want to get everything in Ikea! After all, you’ll want to buy a few items to make your home a little Spanish. So what is shopping in Spain really like?

The opening times of different stores will usually depend on the region of Spain, but generally most will be open from weekdays 10am to 8pm, and closed between 2pm and 5pm for a siesta. In some areas, shops may be open even later, or open during the siesta hours. There is no rule.

At the weekends, shops will generally only be open on Saturday morning, and closed the rest of the time, including public holidays. Larger stores will be open all day on Saturday. 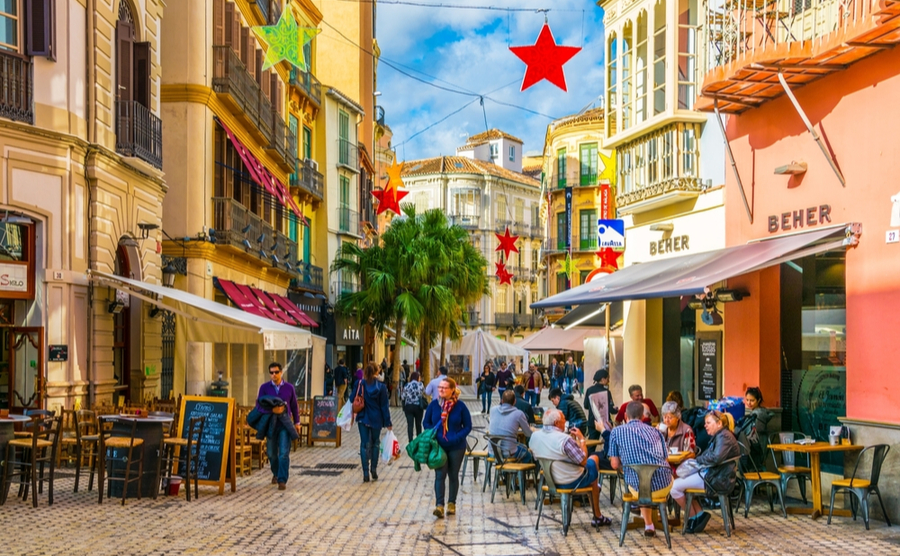 On the Costa Blanca and Costa del Sol you can find English products easily. There are even British-owned supermarkets such as Iceland (five stores) and in Marbella there’s a Marks and Spencer. If you live within reach of Gibraltar, you will find a large Morrisons there.

But now you’re in Spain it is good to explore the local supermarkets too. They are different from British supermarkets in not selling a vast selection of foreign products. It’s getting better, however, and you’ll find French, Italian, Greek, Mexican, Chinese and Japanese and even British items in some of the larger chains.

Lidl and Aldi have regular “country specials”, from Italy, Greece, Germany, France and Asia. It’s well-worth stocking up when these are on offer as they are usually less expensive than in the Spanish supermarkets and there is a decent range to choose from.

Most Spanish supermarkets are clean and well laid out. Mercadona is probably the best known and they have their own brands, Hacendado for food and Deliplus for personal care. They are one of the cheapest in Spain and you will probably find a store nearby. Alcampo is another relatively inexpensive supermarket and is the second largest hypermarket in Spain. Carrefour is more expensive but often carries food and items difficult to find elsewhere. Dia is a Spanish discount chain while Esclat/Bonpreu are exclusively located in Catalonia. Esclat is quite upmarket though their prices are surprisingly competitive. They recently began supplying electricity and gas to  households at moderate prices and also offer discounted petrol and diesel with their store card.

Another thing to take into account is that when it comes to fresh produce, Spanish supermarkets tend to sell what is in season. Most have fresh fish counters with an excellent choice, all labelled by origin and whether farmed or line caught. Usually the day’s catch will arrive around 6pm. The larger stores will have a butchery too, but these really do vary in quality. Basically, you get what you pay for.

For vegetarians and vegans, there is some good news. Until not long ago, Spain was a desert for non-meat eaters but in the last couple of years there has been a move to offer vegetarian and vegan foods. You may not find a large variety but even Lidl and Aldi are now stocking some and so are the larger Spanish chains.

One of the greatest pleasures of moving to another country is the thrill of the open market, with 100 types of olive, strangely shaped sausages, live seafood and vast displays of fresh vegetables. 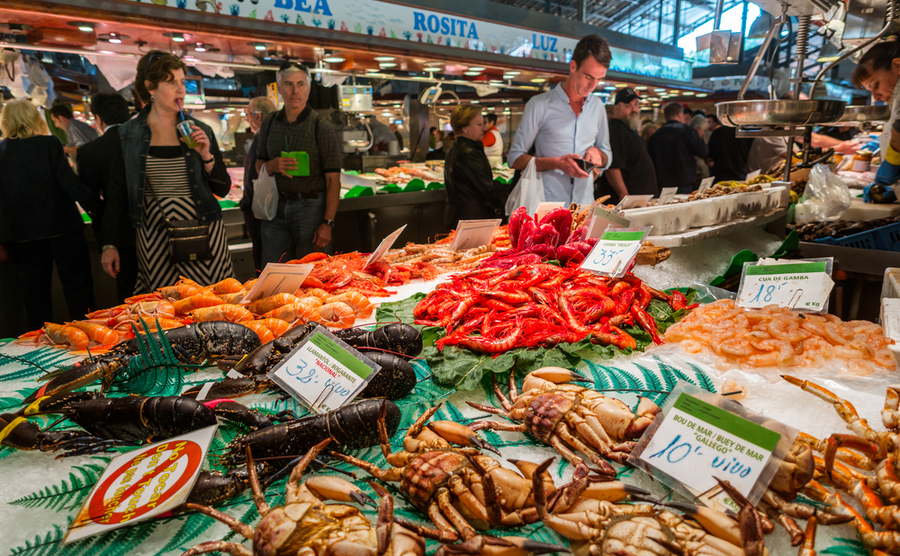 Then there is the life of the market – the tapas bars, street cafes and snack vendors. It all feels it has barely changed for hundreds, maybe thousands of years.

Markets are usually open from 9am to 2pm, and the most famous are La Boqueria in Barcelona, Mercado San Miguel in Madrid, Atarazanas in Malaga or Mercat de l’Olivar in Palma de Mallorca. In big cities the food markets tend to be open every working day.

There are other local markets too, such as La Cuesta de Moyano in Madrid, or El Rastro, the flea market also in Madrid every Sunday.

The Spanish love to shop just as much as the residents of any other country. What makes shopping in Spain so much more pleasurable, however, is the continuing presence of exciting, lively shopping streets in town centres. After all, as Spanish people come out in the cities for the “paseo” – their evening walk – why not do a little shopping at the same time?

Spain has also given us some of the most popular high street brands too, such as Camper shoes, Zara, Loewe and Massimo Dutti.

Clothes seem to fall into two groups in Spain; expensive or very cheap. However, if you head to the towns, especially the larger towns, you’ll find familiar clothing chains such as H&M, Zara, Massimo Dutti, Berksha, even Primark in the big cities. Punt Roma is a mid-range shop for women over 30; Benetton for a younger market. You will find Dunnes Stores in Andalusia where you can buy many UK and Irish labels.

Don’t ignore your local town’s private boutiques. Even in expensive shops you can find mid-price clothing and they often have regular discounts. The twice-yearly sales offer an excellent opportunity to buy something that might have been out of your price range, but generally they rarely slash prices as low as they do in Britain or the US.

Everywhere you will find very inexpensive clothes; mainly T-shirts and summer items you might only wear for one season.

There are bound to be things you’ll need for the home. Luckily, Spain has an excellent range of goods from useful to decorative in almost every town.

Check out the Chinese shops which sell everything from dustpans and brushes to towels and kitchenware. These are local stores and even smaller ones carry a reasonable range. The larger ones are more like department stores, selling clothes, DIY, stationery, kitchen items, garden items, decor, picture frames, furniture, etc. They are cheap for some things but not everything and prices do vary from store to store. 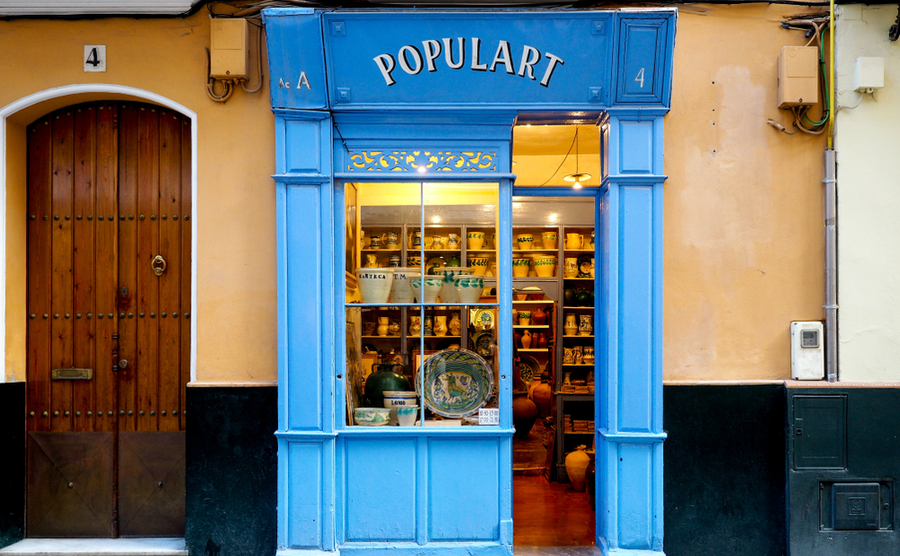 There are many dedicated “home” shops. Casa is one of the best known, a Belgian firm that sells on-trend decorative and useful things to beautify your living and sleeping space. Another is a French company, Maisons du Monde, which is quite upmarket for good quality furniture and accessories. The Portuguese firm, La Lotja do Gato Preto is a fun place with a speciality in tableware and soft furnishings. The Spanish stores Muy Mucho are a good place for items made from natural wood, fibres and materials. Not overly pricey either. Zara Home is similar to the shops in Britain, selling upmarket bed linens and home decoration.

There are plenty of small, local, specialist home-decor shops too, always worth a visit. There are also specialist electrical shops where you can find that one elusive light bulb that you need and which is not generally available. These are usually found in secondary locations in your local town.

You’ll have no problem here at all. There will be several in your area, mostly small independent stores where you will get personal service. Some will do repairs; all will sell you phones or computers. Of course, you can head for the big chains too. The German Media Markt, for example or El Corte Inglés department store (which is also good for better quality houseware). APP in Alicante is another franchise store worth exploring.

All the network providers will also sell mobile phones but not necessarily at the best prices. You can check them out at Movistar, Orange, Vodafone, Jazztel (Orange), Amena (Orange), Yoigo, Lowi to name but a few. I suggest you also look online: www.amazon.es has an excellent range of mobile phones and computers on offer.

Fridges, dishwashers and washing machines are generally more expensive in Spain than in the UK. It is often worthwhile using a local shop rather than a big conglomerate a distance away from your home. You might pay a fraction more for the item but you will get personal service and knowledge, a good after-sales service and as a customer you’ll enjoy discounts in the future. That washing machine might be €30 cheaper in a mega store but you’ll have to pay for delivery and if something goes wrong, you will have to wait for them to send out a repair person. Your local store is just up the road to come to your aid.

One of the best times to buy white goods is in the January sales before the new models arrive. So, if you don’t mind last years’ Bosch dishwasher rather than the new model, you can save a lot of money.