Homes in Spain where you can swim and ski!

When you think of skiing, which country pops into your mind? France? Switzerland? Austria? When you think of Spain, what image do you see? Beaches? Warm weather? Tapas bars? Well, did you know that there are many wonderful ski resorts in Spain to enjoy too, often within reach of the coast where you can buy a second home?

Where are the best places to buy property near ski resorts in Spain?

Beautiful mountain ranges straddle much of the north and central southern parts of Spain and it is here that you will find the best ski resorts. Most are family friendly and budget friendly too. These areas are lovely to visit in summer as well, where you can go hiking, rambling and riding and where nature lives undisturbed.

Spain is just a couple of hours’ away from the UK and there are plenty of daily flights between the two countries with budget airlines, which is one reason it is the most popular country for British people to invest in. Of course, there is also the lure of golden sand, sunshine and lifestyle but you can have all this and still be less than 2 hours from mountains and skiing.

Skiing in France or Switzerland can be a very expensive affair and buying property in a successful ski resort there is out of reach for many. Spain however has beautiful mountains and a population that loves to ski and homes at affordable prices, not to mention the cost of lift passes and ski hire.  So, if you like the idea of living close to the mountains and the coast or big city, why not think about buying a holiday home or permanent home in Spain?

Let’s take a look at where you can ski and still be able to swim:

Andalusia is certainly one of the most popular destinations for British people for sun and sea but this region also has some of Spain’s best skiing and mountain activities. The Sierra Nevada mountain range is not only beautiful but offers some of the best winter ski resorts in Spain being the second highest in Europe – the Alps take first spot.

The resort Sol y Nieve, Pradollano is world class and is open from November to May with 100 km of pistes. The slopes tend to be faster in the mornings while the afternoons will benefit learners and snowboarders and there is plenty of off piste skiing for the courageous. The resort isn’t the largest but probably is one of the best for all the family and less than 2 hours’ drive from Motril on the coast. It is also close to Granada, which makes it an excellent place for winter sports enthusiasts. Day passes can be as low as €35. 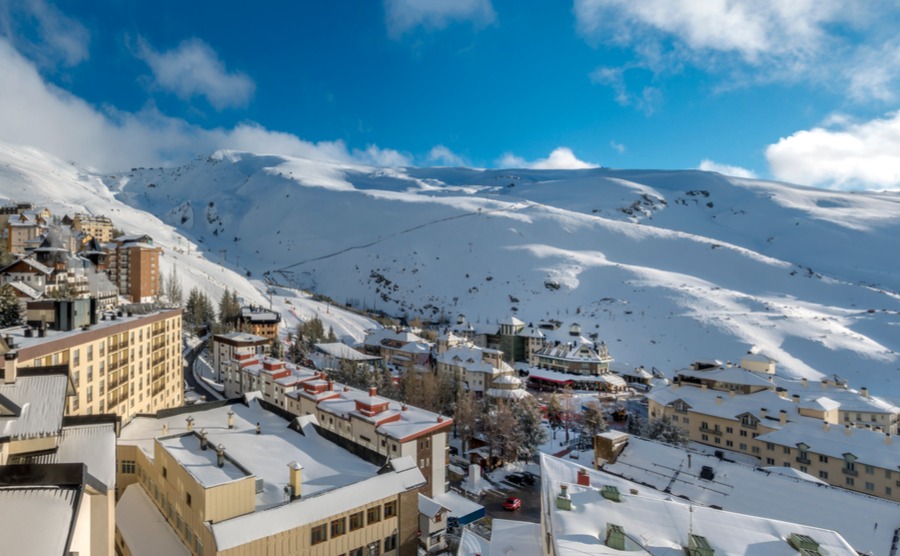 Pradollano is one of the best ski resorts in Spain.

Motril is the second largest town in Granada Province and includes Calahonda amongst its beaches. A popular area with British people, property is not overly expensive and you can be by the sea and close to ski resorts as well. Good road networks can get you to the nearest ski station in 1 hour 20 minutes.

Granada is without doubt one of Spain’s most beautiful cities, steeped in history with long winding streets and hidden courtyards. Tourists come to experience the Alhambra Palace and Generalife but there is more to this place than a mecca for tourism. Granada is a small city 45 minutes’ drive from the Sierra Nevada ski resorts under an hour to the coast near Motril with excellent restaurants and tapas bars, a laid-back way of life and nature all around it. There is an international school here and it also has opportunities for teaching English with its many language academies.

Granada experiences all 4 seasons but has, on average, 12 hours of sunshine a day! During the winter months you can enjoy five hours of blue skies and sun. It can get cold but is invariably bright.

The vast Pyrenean mountain range runs for 300km and separates France from Spain. Almost in the centre is the Cerdanya Valley which offers easily accessible, excellent skiing which is more affordable than France just across the border. Puigcerdà is the main town of the region in Spain but go across the river and you are in French Bourg-Madame!

The area is full of pretty little villages all within easy reach of France and Andorra. There is a real cultural mix here with Castilian Spanish, Catalan and French widely spoken. La Molina is a very popular ski station, under two hours from the Costa Brava and the Catalan capital, Barcelona. There are 63 slopes as well as many other winter sports such as cross country skiing, snowboarding and snowshoeing. Masella is situated above La Molina and is a smaller resort but with several steep intermediate runs. Lunch is the main meal of the day in Spain, taken after skiing at around 3.00 pm and the area offers a wide variety of restaurants serving delicious mountain dishes.

The N260 trunk road links La Molina to the beautiful Catalan coast. In 2 hours you could be visiting the ancient Greek and Roman ruins of Empuriabrava or enjoying dinner in the pretty seaside village of Sant Martí d’Empúries. A gentle stroll from here along the coast and you are in L’Escala, one of the most popular coastal towns with British people and other nationalities which is full of bars, restaurants and nightlife.

Being so close to France it is a sought-after part of the coast and property here is more expensive than in other Spanish regions but you can still find good value houses. Empuriabrava is close to everything – the French border, airports, Girona, Figueres – and is a town renowned for its canals. With every amenity you could need it is the perfect place for a home not far from the Pyrenees and skiing.

Navacerrada is the nearest ski resort to Spain’s capital city, Madrid. In under an hour you can leave the city far behind and enjoy a day’s skiing on the slopes of the Sierra de Guadarrama mountains. The ski resort of Puerto de Navacerrada opened in 1903 and is of medium size with 19 pistes and 415 metres of vertical descent. It also offers snowboarding and snowshoeing, Nordic skiing and sledging. Being so close to Madrid and also Segovia, it gets very busy at weekends and it is sometimes necessary to get there early to be able to park the car.

Some years lack of snow can be a problem and last year the pistes weren’t opened until January, 2 months later than in the Pyrenees. It has a large variety of restaurants and tapas bars to sustain the skier and is famous for its veal. There are other activities available too, horse riding, trekking and an adventure park. 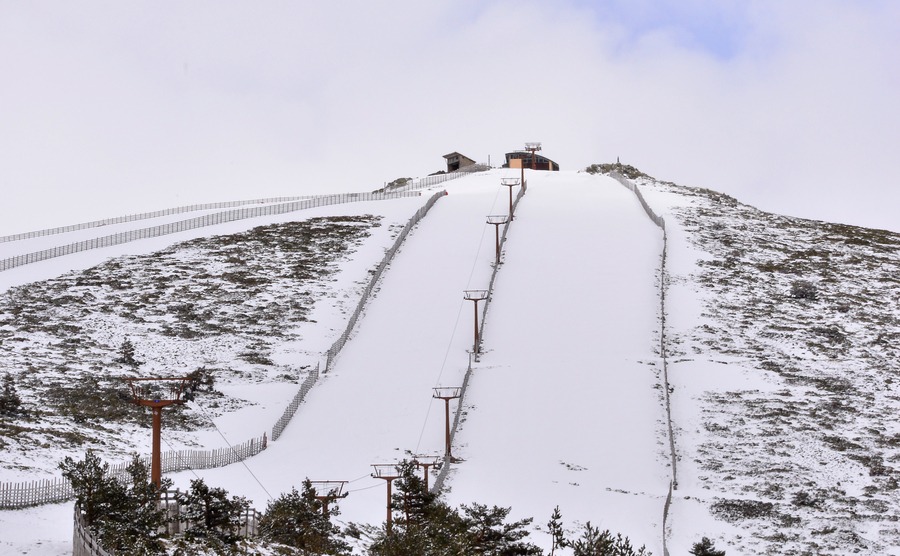 Navacerrada is the closest ski resort in Spain to Madrid.

The nearest cities are Madrid and Segovia. People who move to Madrid for work are more than delighted to be able to take off at the weekend to spend a day skiing and enjoying good food up in the clear air of the mountains. Madrid, of course, offers everything a capital city should with an international airport linking it to all parts of the world.

Situated in central Spain, Madrid is a morning’s drive away from the beaches of Valencia. If you leave in your car at 8.00 am you can be swimming in the sea at midday and enjoy a leisurely lunch in a seafood restaurant by the coast. Alternatively, the AVE or very fast train can get you from Madrid to Valencia in just 1 hour 40 minutes and then hop on a bus and within minutes you will be on the beach or perhaps in a restaurant which serves paella with a cool glass of wine?