If like most overseas property buyers you want a pool, access to a beach and sea views then you should head to one of the many resorts on Spain’s Costa del Sol – there’s something for everyone!

The chance to cool off in a swimming pool is the most important must-have for Brits searching for a Spanish property, according to research by a leading property portal.

Being near a beach is the second most requested feature people want with their second home in the sun, said Zoopla, which recently tracked keywords used in searches on its website. The third most sought-after quality was sea views, followed by having a garage, just ahead of having a garden. Other popular search terms included golf course, river, detached, villa and furnished.

Interest in homes on the Costa del Sol soared 44% during a five-week period over the summer.

Unsurprisingly, the website revealed Spain as the UK’s favourite place to search for a foreign home, where interest in homes on the Costa del Sol soared 44% during a five-week period over the summer. Portugal attracted the second highest number of searches, followed by France, Cyprus, USA, Italy, Ireland, Jamaica and Greece.

Looking closer at Spain’s Costa del Sol and we can see that this famous stretch of coastline has a resort to suit all tastes and budgets. Most Brits and foreign visitors reach the region by flying into Málaga, which is well connected across Europe and within Spain. Other possible airports include Gibraltar and Granada.

Key resorts in the Costa del Sol begin on the eastern side of Málaga, with Torre del Mar and Nerja, both geared towards families and with a more traditional feel compared to other resorts further west. Torremolinos is the first major resort heading west from Málaga; known for its high-rise beachfront, lively nightlife and popularity with package holidaymakers. 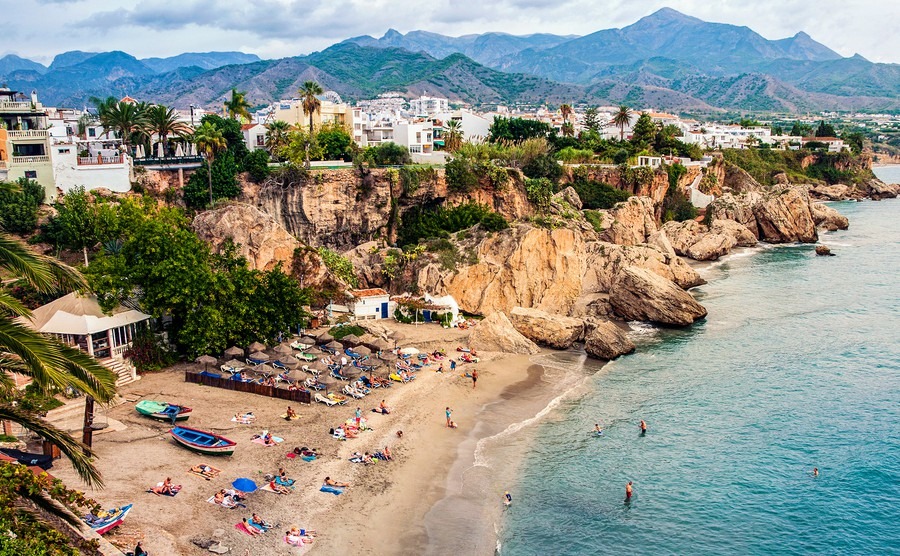 Nerja has a more traditional feel than some other resorts on the Costa del Sol.

Next along is Benalmádena, which pretty much offers something for everyone, including families, retirees and youngsters. Highlights include its beachfront, award-winning marina development, pretty old quarter, aquarium and amusement park. Neighbouring Fuengirola is another high-rise resort with expansive beach and prom, and lively entertainment and restaurant scene. A quieter option just inland from there is the white village of Mijas.

Then comes a stretch of coast that is especially popular with British families, Mijas Costa, which covers Calahonda and La Cala (de Mijas) and everything in-between. Typical properties are apartments or townhouses on small urbanisations near the beach. Things get more desirable – and expensive – as you reach the eastern fringes of Marbella, home to low-rise, verdant communities like Elviria, Rio Real, El Rosario, Las Chapas, Los Monteros and Cabopino; often built around or close to a golf course.

The leisure resort of Sotogrande is home to multi-million-euro villa communities, championship golf courses, a world-class marina and polo club.

You then enter the Costa del Sol’s most fashionable area, the Golden Triangle, home to some of Spain’s most exclusive, extravagant properties and often a hang-out for celebrities. Typically encompassing the area between Marbella, Benhavís and Estepona, including San Pedro de Alcántara, it includes the famous hot spots of the Golden Mile and Puerto Banús. There, Nueva Andalucía is particularly popular with Brits and also known as Golf Valley.

Before you reach Gibraltar, Estepona is a traditional, family resort, with long prom and beachfront. A little closer to the Rock is the leisure resort of Sotogrande, with an exclusivity status equal if not greater than the Golden Triangle and which includes multi-million-euro villa communities, championship golf courses, a world-class marina and polo club.