A Spanish property hunt, by scooter!

When I needed to take my moped to Barcelona, I grabbed the opportunity to take it slowly and get a fresh perspective on great places to buy a home by the Mediterranean. Here’s what I found.

One way to brighten up a dull January is to spend a day winding your way along the pine-scented roads of the Costa Brava on a scooter. You drift through olive-grove countryside that stretches to a horizon of snowy Pyrenean peaks, gaze down on secluded bays set against a winter-blue Med, and pootle through semi-dormant resorts, where locals pick at anchovies on fresh sunny seafronts. The freedom of being able to stop and take in a view, have a quick café solo or enjoy a leisurely lunch of fresh fish is hard to match. You’ll soon find areas where you could happily see out your days or take pleasure in owning a second home…

Ready to buy in Spain this year? Don’t miss your free tickets to Your Overseas Home in Manchester on 25th April for the chance to talk to the experts in Spanish property, law, finance, currency and more, all gathered under one roof.

The opportunity to do this came my way when I agreed to lend the scooter that I kept at my holiday home to my sister Olivia – it’ll get more use with her. She lives in central Barcelona, which is just under 200 kilometres away (by ‘B’ roads, not motorway) from my place, located up the coast towards France in the resort of L’Escala. Setting out on a beautiful, sunny morning last month, my southward journey to deliver the bike took in most of the key resorts of the Costa Brava… 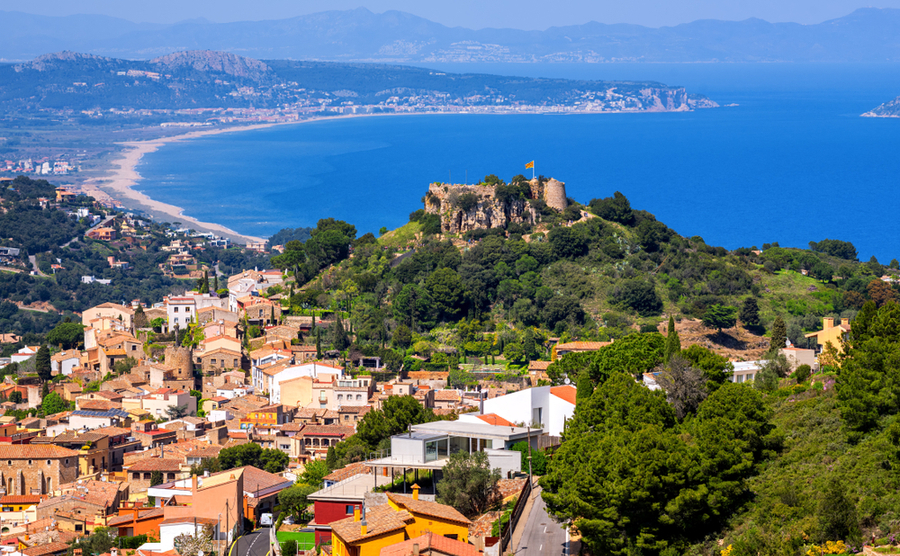 Where I call home in Spain, L’Escala sits on the southern shores of the Bay of Roses, 25 minutes from the town of Figueras, the birthplace of Salvador Dalí. Its beating heart is the old town, set around two pretty and recently pedestrianised bays and where houses in the maze of narrow backstreets belong mainly to locals. The majority of foreigners, including myself, own in the newer more seasonal area of Riells, with its large beach, lively strip in the summer and marina/fishing port. L’Escala also includes the community of Sant Martí d’Empúries on its northern edge, famous for its Greco-Roman ruins and ancient square, and to the south the pretty bay of Montgó, bordered by a natural park.

Best described as bijou medieval towns, just try not to fall in love with Pals and Begur, which are set on hilltops five minutes apart and a similar distance from the coast. Begur was an obvious place for a break on my trip, and parking the bike at the foot of a cobbled street, I ambled up into a square and savoured a coffee in the shade of the pretty church.

Begur is the gateway to coves and secluded beaches, where towering cliffs are dotted with, arguably, the Costa Brava’s most desirable properties

Most foreign homeowners here prefer to be close to either of these towns, without being in the middle of them – parking isn’t fun and summers are very busy. Villas on shady plots in the surrounding countryside or somewhere next to the beach are more popular. Pals’ beach area, Platja de Pals, offers a choice of apartments near the sea.

Meanwhile, the road out of Begur is the gateway to some highly treasured coves and secluded beaches, where towering cliffs are dotted with sleek, private villas, arguably the Costa Brava’s most desirable properties. These spots include Sa Riera, D’Aiguafreda, Sa Tuna, Aiguablava, Tamariu, Llafranc and Calella de Palafrugell.

Skirting inland a bit around the traditional town of Palafrugell, my next stop was Palamós. A friendly coastal town (not unlike L’Escala) that retains much of its fishing heritage charm, it  focuses around a preserved historic centre and a central beach and promenade. With a busy fishing harbour (and fishing museum), it’s famous for prawns – which made it an obvious stopping point for lunch. I headed to the southern edge of the bay, where the town merges with the more touristy Sant Antoni de Calonge, and feasted on a €16 set menu. My meal included baked artichokes in a sauce with bits of jamón for starters and arroz negro (or paella negra) as a main, made even more enjoyable by the view of the sun-sparkling Med! Dessert was included, but I had to pass on that…

It’s the season to go and look at homes in Spain, so don’t miss your free guide, Your Viewing Trip, to find out what you need to look out for.

Sant Antoni de Calonge, still within Palamós bay, is the modern beach area of Calonge, a small medieval village with pretty square set on a hill a couple of kilometres inland. Sant Antoni’s beachfront has a cheerful promenade lined by apartment blocks with restaurants and bars. The villa communities on the hillside around Calonge, such as Mas Pere, are especially popular with British owners, who enjoy the more private location combined with sea views and proximity to Calonge and short drive down to the sea. 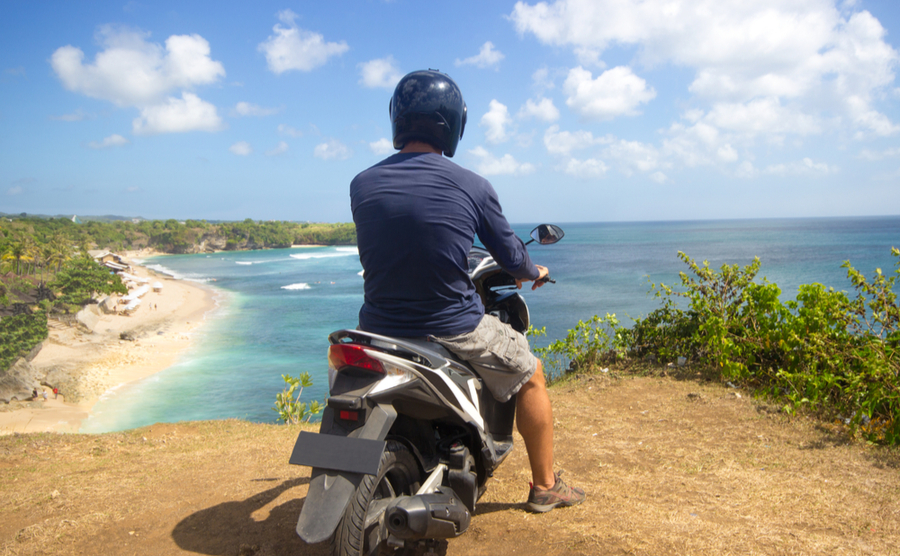 A few minutes further along the C-253 took me into Platja d’Aro, a bustling modern resort with a golden two-kilometre beach. Passing through, I saw evidence of why it’s deemed the Costa Brava’s go-to resort for entertainment and boutique shopping, with its chic restaurants, bars and clubs, and designer shops. Apartment blocks and hotels mean it lacks the charm of some of the smaller resorts, but the amenities and beaches make up for that!

Set within a protected bay, Sant Feliu de Guíxols is a busy resort in the summer and is especially popular with Catalans. Its old town boasts beautiful old buildings and an indoor market.

Next came Sant Feliu de Guíxols, a traditional port town complete with monastery and with an active year-round population. Set within a protected bay with a treelined beachfront, it becomes a busy resort in the summer and is especially popular with Catalans. Its old town boasts beautiful old buildings and even an indoor market.

The ride from Sant Feliu to Tossa de Mar was one of the most scenic parts of my trip. I followed the GI-682, a narrow road that winds its way around green and at times lush cliffs, offering lots of hairpin bends and the occasional cliff-edge viewing point. At intervals, I looked down on exclusive residential developments set around secluded coves. I had the road to myself for most of the time.

One of the Costa Brava’s most photographed resorts, Tossa is famous for its castle and walled old town, and imposing location on the bay of Tossa. It was quiet when I hummed through and filled up with fuel. Often dubbed the jewel of the Costa Brava, as a laid-back family-friendly resort with pretty beaches, and a heavy dose of local culture and historic architecture, Tossa ticks all the boxes.

Looking at how to raise the capital for that dream home? Find out how to afford your perfect property with the guidance in our Spain Finance Guide

I passed swiftly through Lloret de Mar, the Costa Brava’s best-known holiday resort which help put the north-east of Spain on the package holiday map in the 1960s. The abundance of hotels and food outlets along the main road highlighted its prominence as a major tourist spot. Today, most foreign buyers head to the quieter residential areas in the hills overlooking the resort, home to some fine villas.

My final break before heading towards the bright lights of Barcelona saw me sipping coffee in a rather hip bar next to the beach at Blanes, regarded as the Costa Brava’s most southerly resort. I had weaved my way into town via a small coastal road that skirted botanical gardens that begun in Lloret. I eased my way down a hill into an unexpectedly pretty old town to the seafront, where a noticeably cosmopolitan feel hinted at how close I was to Barcelona. Recharged, I mounted and prepared to tackle the rush-hour traffic of Catalonia’s intoxicating capital city. 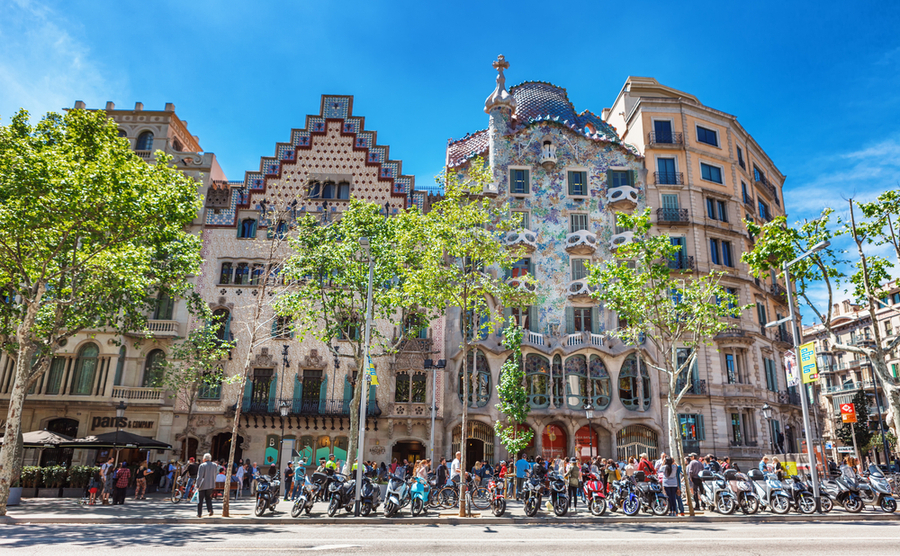