Islands have a certain charm. They have developed in a different way from the mainland, with their own culture, customs and language. The islanders of Spain often consider themselves to be Majorcan or Canarian or Galician first, before Spanish.

Our selected six are accessible all year. Most have a year-round expat population to welcome you if you’re retiring there. A property here will be rentable in summer, but a wonderful, usually warm place to spend your winters too.

A place of refuge and retreat, islands provide a safe port in a storm and an escape from the world. No wonder so many of us dream of a retirement to our own private island!

Spain has around 60 different islands, but only a dozen or so are inhabited. The six we have chosen are all relatively affordable and stunningly beautiful.

Gran Canaria has the second-largest population of the seven Canary Islands, with around 850,000 people. It’s a round island, about 50 kilometres in diameter, with mountains that stretch to a height of nearly 2,000 metres.

There was a time when the island was covered in forests and there is a reforestation campaign to return it to that state. Even so, much of the volcanic landscape remains stark, but you will soon be beguiled by it. There are also plunging valleys, pine forests and golden sand dunes. 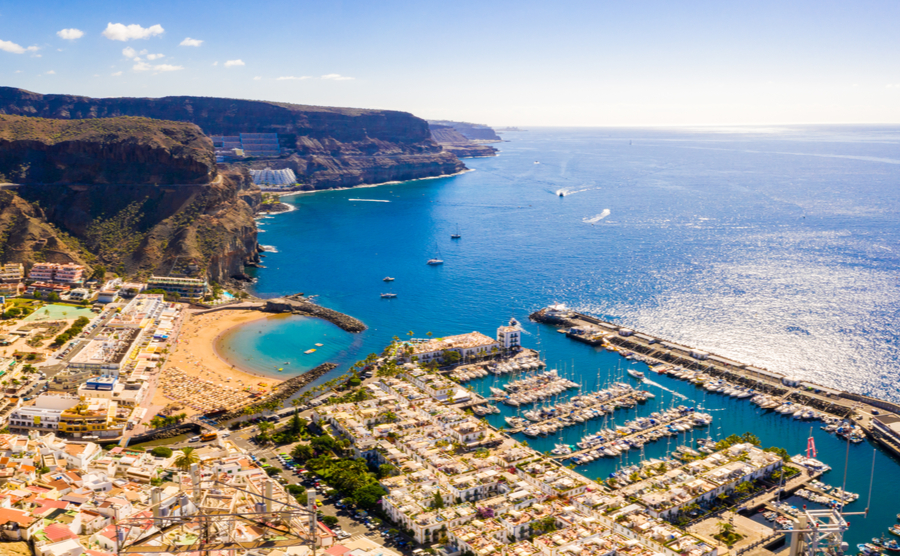 The biggest appeal of the Canaries for many buyers, especially retirees, is the year-round tropical warmth that rarely gets too blisteringly hot.

Gran Canaria has a few more touristy areas, such as Puerto Rico and Playa del Ingles, but there are also pretty attractions such as Puerto de Mogan, a pretty coastal village with canals that has given it the slightly wishful-thinking nickname of Little Venice.

An area we would suggest looking at is the pretty town of Agaete in the northwest of Gran Canaria. The immediate surroundings have pine forests, clear waters and a fertile valley.  The lovely old town has typical whitewashed houses, their facades masking delightful internal courtyards. You can wander through the lovely walled Huerto de las Flores garden.

A 15-minute walk from Agaete is the fishing village of Puerto de las Nieves. Here you’ll find beachside restaurants, shops and a ferry service to Tenerife. Best of all is the walkway to the well-loved natural pools called Las Salinas, three pools in volcanic rock. This is all just a 45-minute drive from Gran Canaria airport. For golfers, there are three courses to choose from in the vicinity.

Gran Canaria is an affordable option given that you can enjoy all year. A rural house in need of renovation starts at just €40,000, or an apartment from around €80,000. For a three- or four-bedroom villa with pool and garden in a good condition, you’ll need around €300,000.

The largest of the Canaries, with a population slightly larger than Gran Canaria, Tenerife really does have something for all pockets and all tastes.

An affordable and lively option is Puerto de la Cruz on the lusher, more tropical northern coast, a 25-minute car ride from Tenerife North airport. Located in the Orotava Valley the town is perfect for retirement with warm winters and hot summers and a backdrop of a green landscape. There is a saltwater pool complex on the seafront, known as Lago Martiánez.

The old fishing port still retains its character with winding cobbled streets with traditional bars and restaurants, while there are some smart shops and pretty squares in other parts of the town. You can wander through the lovely Botanic Gardens or Parque Taoro for a relaxing afternoon. There is an established British community in and around Puerto de la Cruz and a sports and social club in the town. There are 2 golf courses nearby.

Apartments on resorts and developments start at under €90,000 and townhouses start from €190,000.

SEARCH for properties in Tenerife on our property portal

For a wonderful, semi-tropical life in the sun, the small island of La Gomera is ideal. It is probably the jewel in the crown as far as the Canary Islands are concerned but is quiet and peaceful, so might not suit everyone.

The landscape is one of craggy volcanic rocks and wooded hillsides with black sand beaches. The population is just over 22,000 with about 9,000 living in the capital, San Sebastián de la Gomera. The island has no large airport of its own so you need to fly to Tenerife and take a ferry to La Gomera or contact one of the many companies which will arrange direct transport to your destination. 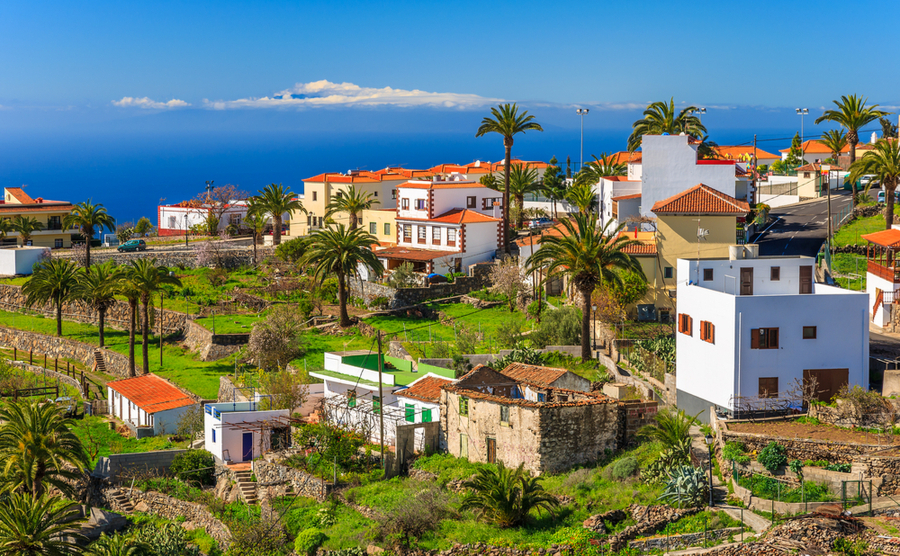 Alajero mountain village on the coast of tropical La Gomera

Part of the attraction of La Gomera is the lack of commercialisation which includes travel with a few flights from Tenerife to La Gomera on a small plane. There are several golf courses on the island.

San Sebastíán de la Gomera is an interesting choice. Much of the town is pedestrianised and the buildings are painted in pastel colours rather than whitewash. There is an abundance of bars, cafés and restaurants to enjoy. Shopping is good too, but everything happens at a slow pace. The cost of living is certainly lower than in the UK and property prices are very reasonable. A two-bedroom apartment costs around €70,000 and family-size houses in San Sebastián starts at around €190,000.

The largest of the Balearics has earned a reputation for being expensive. Indeed, the tourist authorities want it to be seen as an exclusive destination and these days, they work hard to play down the appeal of party areas such as Magaluf and S’Arenal.

But there are certainly affordable corners in Mallorca. Sa Ràpita is in the south of the island, 30 minutes’ drive from Palma airport. It has some of the nicest beaches, but perhaps because it is not on the motorway, people just drive past the little town. The beach of Es Trenc runs for 10 kilometres and is unspoiled, with no high-rise buildings. Its calm, shallow water makes it ideal for swimmers of all ages.

There are certainly affordable corners in Mallorca

Sa Ràpita is a quiet place compared to its busy, bustling neighbours, but you can enjoy watersports and the town has most amenities that you would need. Campos, 12 kilometres away, has larger shops and supermarkets and is also a place worth considering when you are house hunting.

Golfers will love Llucmajor, 14 kilometres away. Since neither town is particularly touristic, property prices are more affordable than on other parts of the island. Apartments start at under €150,000, although you can easily pay double that for a smarter development.

Find properties for sale in Mallorca.

Menorca is a smaller and more peaceful island than its neighbour. It is favoured by people from the mainland, especially from Catalonia since, as on all the Balearic islands, a version of Catalan is spoken as well as Castilian Spanish.

Menorca is another of Spain’s islands which hasn’t been compromised by lax building regulations or excessive tourism. In fact, the island has become a centre for sustainable tourism, offering cycle and hiking tracks which lead to places you cannot get to by car. Located on the west of the island Ciutadella de Menorca is a pretty town with an old centre and narrow streets. Once the capital (now it is Mahon), it has an attractive port from where the fishing fleet sails and from where you can take a ferry to Alcudia in Mallorca.

Just 36 kms from Menorca airport, the town has plenty of historic facades and a stunning square, Placa d’es Born. Three kilometres from the town are two tranquil coves with small beaches and there are plenty more a little further away.

Numerous restaurants are huddled around the port and a pretty square, Placa dels Pins, a perfect place to sit out with a beer or glass of cava most of the year. Good shops line arcaded streets but you need to drive 45 minutes to the nearest golf course, Son Parc.

And now for something completely different. Just off the coast of Galicia in north western Spain, is the small island A Illa de Arousa (Isla de Arosa). It has an area of only seven square kilometres but 36 kilometres of wonderful coastline with 11 sandy beaches. You can reach the mainland easily via a two kilometre bridge and it is a three hour drive to Santiago de Compostela airport. 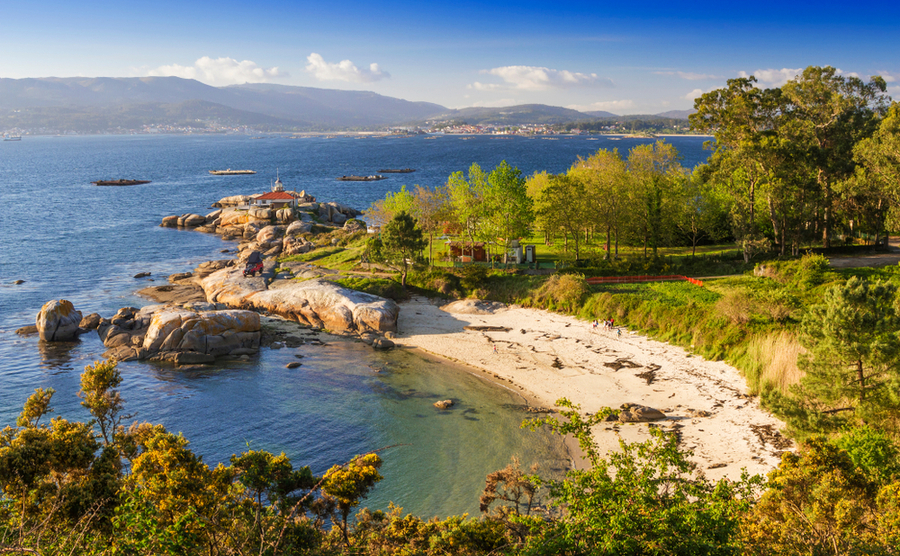 The European Union has named the island a nature reserve and it is a popular holiday spot for Galicians. The Carreirón National Park is located in the south of the island and is a wonderful place to discover, with little inlets and coves and a variety of birds and animals. There are cafés and other amenities by the beaches and the town has a little marina and pretty port. A long promenade runs along the port and behind it are cafés, restaurants and bars. The population is around 5,000 and you will find some imposing houses, mostly owned as second homes by people from mainland Spain.

The weather isn’t Mediterranean or subtropical as the island lies in the Atlantic Ocean. The summer months are pleasantly warm, up to 25ºC but it is rainy (which is why Galicia is so green) and the winters can get chilly.

This might not be ideal for everyone, but the island offers a peaceful alternative place in which to enjoy a different lifestyle.