Ever thought of purchasing a property in Gran Alacant? The lesser known region on Spain’s Costa Blanca is an under-rated location for purchasing an overseas home.

Gran Alacant is beautiful. It has sun-kissed traditional Spanish houses, sloping hills, and from all around, you can see where the point where the sky melts into the Mediterranean Sea. Aside from being incredibly scenic, Gran Alacant is a seaside town with all you could need and want in supermarkets, shops, and restaurants. Not only this, but it is also well-connected and close to other spots in case you fancy a day trip elsewhere. Gran Alacant’s huge appeal comes from it being a mix of the new and the old. It retains a strong Spanish feel whilst also welcoming Brits looking for a home in the sun. Here are five reasons (and a bonus one) on why it might just be your ideal location for a home in the sun…

1.It is not a hard journey at all!

Fortunately, Gran Alacant is super easy to get to from anywhere in the UK. There are multiple flights to and from Alicante throughout the day. Gatwick to Alicante is a very doable two and a half hours. Alicante airport is only a ten-minute drive from Gran Alacant. There are plenty of registered taxis at the airport and it will cost you about €20 to get to Gran Alacant.

So, what does a day in Gran Alacant look like? Breakfast and coffee in the sunshine. Local supermarkets are well-stocked with nutritional, fresh foods. Perhaps a swim in the pool. A bite of lunch.

A leisurely stroll down to the beach, taking in the sights, the sea breeze, the sunshine. If you are passionate about walking or running, the terrain of Gran Alacant is very hilly. It can feel a little like a feat to get to the beach, but when you eventually flop down on to your sunbed, you at least feel that you have earned it. Carabassi Beach is the most popular beach, it has a blue flag rating, and is raved about on TripAdvisor. But all the beaches are gorgeous. Have a swim. Open up a book. A drink or two from one of the bars along the seafront.

Stay out until the sky turns to a mellow golden colour as the sun disappears. Return home. Freshen up. Then a meal at home or in one of the restaurants. Santa Pola is home to the largest fishing fleet in the Mediterranean, so if you’re a seafood lover, you couldn’t be better catered for. Food choices range from traditional Spanish to foods closer to home (see point three).

Around Gran Alacant, Spanish, English, and German are the main languages you will hear. So, there are many expats to reach out to and befriend. Additionally, if you are hungry for a taste of home, there are British-inspired bars and restaurants. Including Zest, where you can get a big British breakfast and the home-calling classic, fish and chips. There is also Quicksave British Supermarket, if you are pining for some home comforts to add to your fridge. Helpfully, Quicksave also has a postal service and passport renewal. 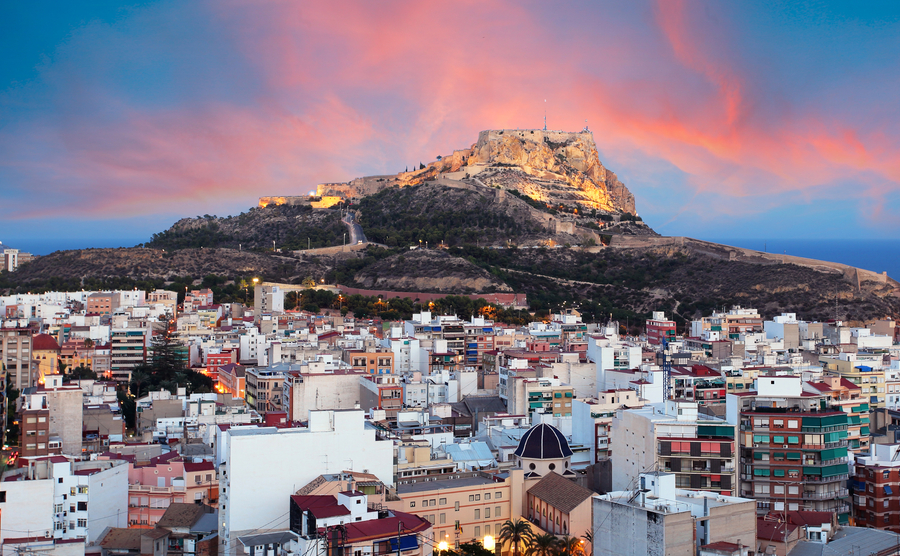 If you are looking for somewhere Gran Alacant is perfectly located for taking day trips to other spots in Costa Blanca. Alicante is a twenty-minute taxi drive away. Alternatively, there are bus routes to hop on, the journey will take you up to an hour. While Gran Alacant is relaxed, Alicante is somewhere to soak in lots of culture: the Alicante Museum of Contemporary Art, the Castle of Santa Barbara, and Santa Maria Basilica. It also has plenty of shopping and a greater choice of restaurants and bars. Alicante even has a high-speed rail to Madrid, totalling two and a half hours.

For a different kind of day, you can visit Tabarca, a tiny island connected to the Spanish mainland with regular ferries. It is the smallest inhabited island in Spain. For such a little island, Tabarca has had quite the history: it has gone from a refuge to pirates to a home for fishermen. Today, the population is around fifty, but it becomes a tourist hub in the summer. Tabarca is like a time capsule to an older Spain.

And for a very different kind of day (and night), Benidorm is two hours via public transport, and one hour by car. You could spend a couple of nights there. Let your hair down and go wild in Benidorm’s best night clubs. Try to sing cabaret style. Or transport yourself to 1960s Vegas with an Elvis tribute act. Then, when the music feels too loud and your head starts to pang, return to Gran Alacant to nurse your hangover. 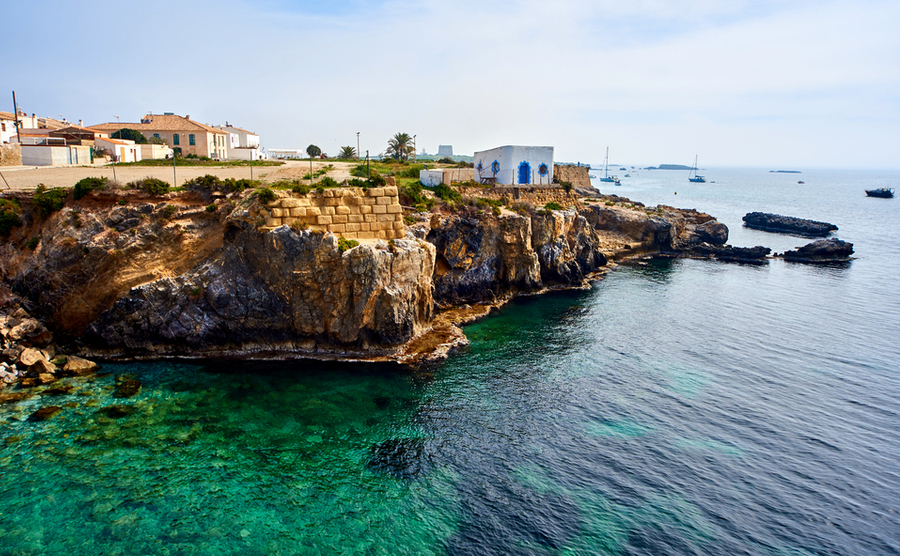 Fancy a day trip to Tarbarca?

Unsurprisingly, August is the hottest month, with an average of 31°C. The wettest month is September, but temperatures are still firmly in the twenties, sometimes hitting 30°C. So, as rainy months go, it could be much worse (think cold, wet British Januarys). In Gran Alacant, the coldest month is January at 17°C – but who knows, for some of us bold Brits, that might just be warm enough for a swim. 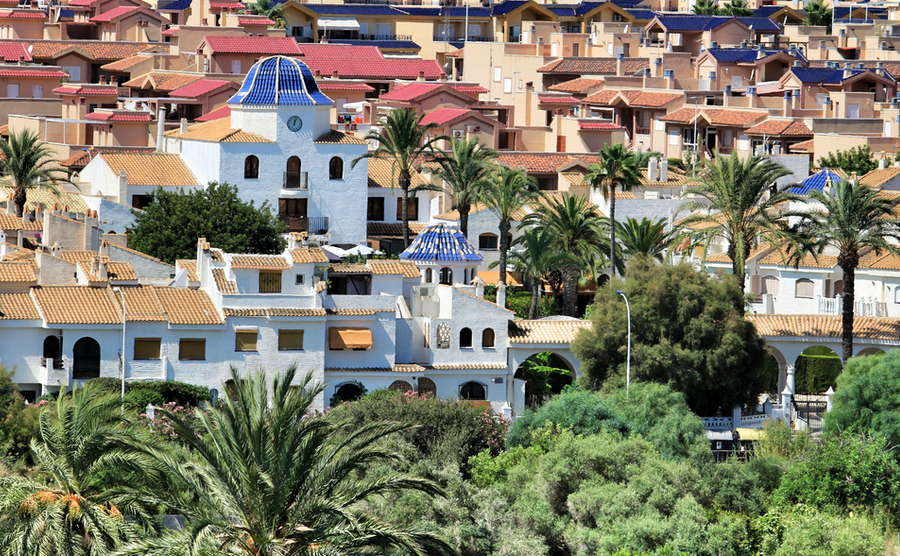 Gran Alacant has a mix of traditional Spanish properties and new developments.

Last but definitely not least – Gran Alacant has the wonderful bonus of being pleasantly priced! If you think of the Costa Blanca, you probably do not immediately think of Gran Alacant. And that is a great thing when it comes to the cost of a property there. Gran Alacant has a combination of traditional Spanish properties and an increasing number of modern apartments popping up. Your choice between these two will likely be down to a matter of style and comfort. For a two-bedroom Spanish townhouse in Gran Alacant, the price will start at €100,000. For this, you can expect the beach to be in walking distance and a communal pool. The same number of bedrooms, but in a new build, the price jumps closer to €200,000. Adding a third bedroom sees the price hop to €250,000.

Gran Alacant is ideal for people seeking a mix of modernised and traditional Spain. In September, when the weather is warm and the tourists are gone, it has a relaxing, low-key vibe. In Gran Alacant, you can spend your days peacefully and enjoyably. For walkers (or even runners), it is a stunning setting for leg stretching. If you are looking to form bonds, then there is a wonderful expat community to get to know. And if you want to feel confident that you can get back to the UK in a jiffy, then what better option then somewhere just ten minutes from the airport? As Gran Alacant is so well-connected, it is the perfect home base for those who like to go on daytrips, be that Tarbarca or Alicante, once in a while. And then, of course, there’s the beach to doze and tan on. All of this for the added bonus of very affordably priced properties.