Inland Costa Blanca: all the sunshine for less money!

Whilst the seaside is where most people head on the Costa Blanca, it’s well worth going inland on your property hunt. You can have all the advantages – sunshine and a relaxed way of life – for considerably less money, plus you’ll find a more authentic, less touristed, Spanish way of life in the region’s historic towns and villages.

The Costa Blanca falls into 2 distinct areas, the south being dry and arid whilst further north it is greener. Both areas are interesting and throughout the region there are no less than 10 national parks to explore. Inland the temperatures tend to be higher than on the coast unless they are on higher ground but both areas enjoy a Mediterranean climate with hot and sunny summers and mild winters with some rain and more than 3000 hours of sunshine a year.

We can introduce you to the best estate agents, lawyer and currency specialists for your move to the Costa Blanca. Simply fill in our enquiry form with your requirements and we’ll be in touch.

Inland areas are comparatively unspoilt and you can really enjoy a Spanish lifestyle. Alicante airport is within reach from all parts of the region and the road network is generally very good. Local transport is patchy though, so you will need a car. Trains run from Alicante to Madrid, Valencia and Barcelona as well as many local towns. It should be pointed out that you will need a basic level of Spanish as English isn’t as widely spoken as on the coast. People are friendly and if you show goodwill by attempting to chat in Spanish, you will be rewarded with good neighbours and friends. 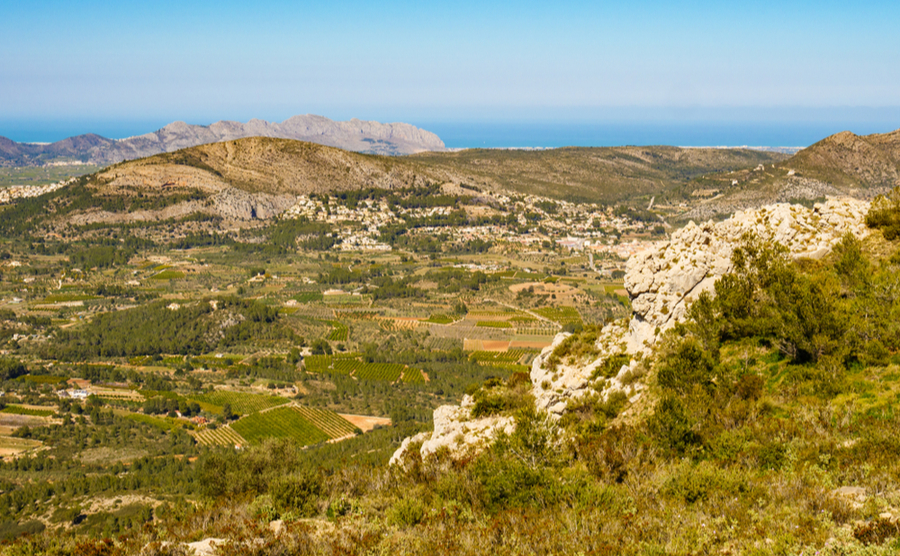 Head inland on the Costa Blanca and you’ll find some fantastic-value property.

Until now, real commercialisation hasn’t reached the inland areas, making life in the small towns and villages traditionally Spanish. This wouldn’t suit everyone as village life is lived at its own slow pace and you will have to look further afield for major entertainment. However, the rewards for choosing to live inland are not only financial as you will become part of the community and will usually find like minded British and other nationalities already there.

Where are the best places to buy on the inland Costa Blanca? 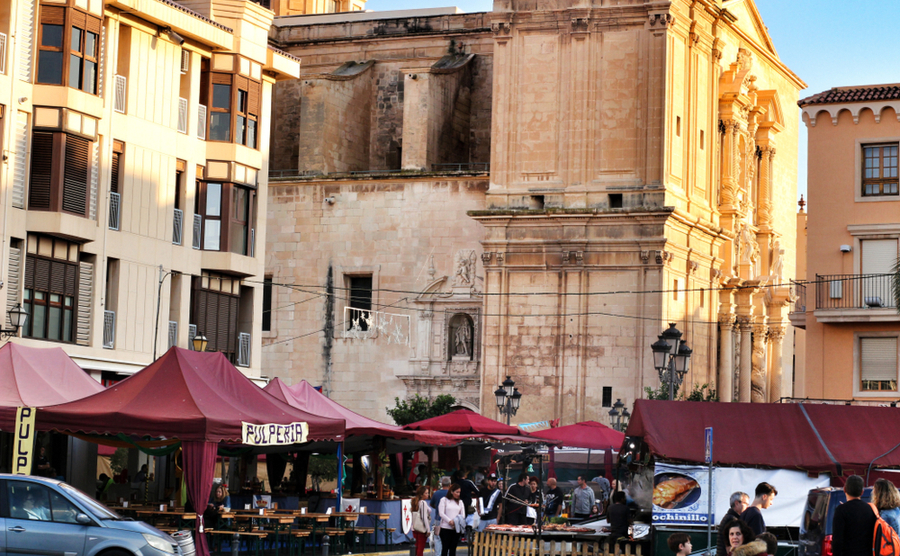 Elche is a lively town with a very Spanish feel. Sonia Bonet / Shutterstock.com

Elche is a town in the south west of the Costa Blanca just 21 kilometres from Alicante Airport. It is a large town with a population of  230,625 and it is one of the main centres in Spain for the manufacture of footwear with over 1000 shoe factories. Being so close to the coast, you might expect it to cater for foreigners but it remains a very Spanish town.

Being so close to the coast, you might expect Elche to cater for foreigners but it remains a very Spanish town.

There are several national and international supermarkets in the town and shopping is generally good. It’s an excellent place for sport lovers and also has some delightful nature trails where you can cycle or walk whatever your age and fitness level. There is an excellent adventure playground for kids and believe it or not, an ice rink. Golf enthusiasts will be pleased to know there are 12 golf courses within easy reach of the town.

As well as Spanish restaurants there are others offering international cuisine, for example Chinese, Japanese, Turkish and Italian. A great part of the town is taken up by palm groves and gardens, making it a place to walk in rather than to drive in. €220,000 will buy a 2 bedroomed, 2 bath detached house not far from the town centre with a pool.

Not far from Elche lies the Hondón Valley, a very quiet and attractive area with quaint villages which seem not have changed for centuries. A fertile region, agriculture is the main occupation with almonds and grapes the main crops.

Hondón de las Nieves is a lively village situated amongst vineyards. The name actually means “Snow Gorge” but don’t be put off by the name as it doesn’t snow here, the snow refers to the town’s patron saint, the Virgin of the Snow. Surrounded by woody hillsides and pines, the pace of life is gentle, following the seasons and away from commercial activities.

It is here that the grapes are grown for a very special Spanish tradition which happens on New Year’s Eve. Everyone is given twelve grapes and as the clock strikes midnight, you are supposed to swallow a grape at each of the 12 strikes. It’s almost impossible to do!

Hondón De Los Frailes is 45 minutes’ drive from Alicante airport and 40 minutes from Guardamar del Segura beach. Here it is a little cooler than on the coast both in summer and in winter due to the altitude.

Between the 2 villages, just minutes’ apart, there is everything one needs in daily life: several supermarkets, a town square, bars, small restaurants, bakery, butcher, dentist, medical centre, opticians, hairdressers, banks and post office. The market visits twice a week and both villages have many fiestas for everyone to enjoy.

Other villages nearby and worth exploring are Alguena which hosts an excellent Sunday market and Aspe, a larger town with a covered food market, attractive architecture, park and pretty church square.

The area has seen an influx of foreign residents in recent years, particularly from Britain, the Netherlands and Germany, making for a healthy property market, both for rentals and purchases. €299,950 buys a 4 bedroomed detached house with pool and landscaped gardens. Expect to pay around €139,950 for a 4 bed finca close to a village. 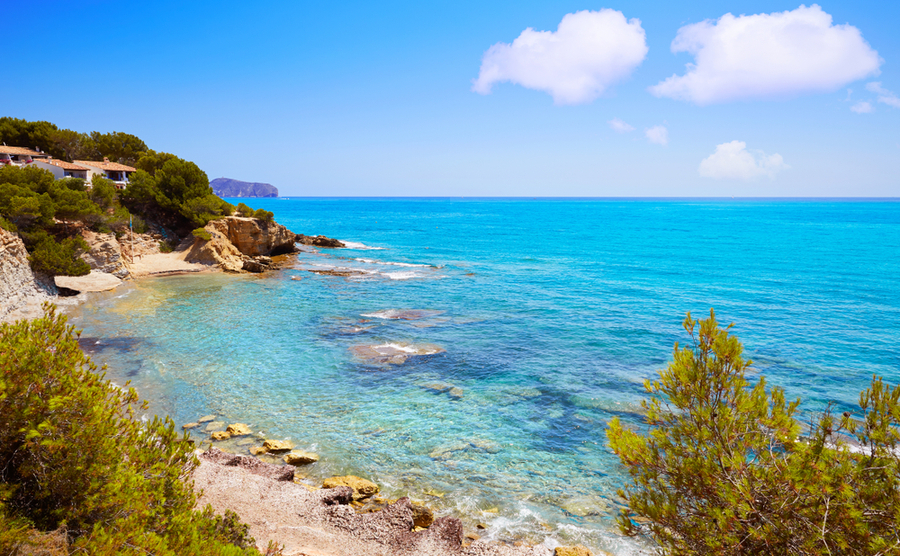 Benissa is only a short drive from beaches like Cala Pinets.

Located in the north east, Benissa lies halfway between the coast and the lovely Jalón Valley and is a 55-minute drive from Alicante airport. It is one of the oldest towns in the region with typical narrow streets, a town square and pretty houses which are much larger than you would imagine from the frontage. The town actually has its own four-kilometre coast with little bays and rocky pools. Between the town and the sea are valleys with terraced fields and meandering roads and here are several country villas and fincas.

Property prices are very reasonable in Benissa, as €299,000 buys a detached villa and €180,000 is the price for a quality 2 bed apartment, which is why many British and people from other countries have bought here. As a result, there are several clubs and associations offering activities in English.

Alcoy is famous for its annual Moros y Cristianos festival.

Alcoy is the furthest inland of the places featured in this article, situated below the Serra Mariola Mountains and at the edge of the Font Roja National Park. It is believed that people have been living in what is now known as Alcoy for 60,000 years. It is a large town with around 60,000 residents and is 46 minutes’ drive from Alicante airport.

There are many lovely modernist buildings in the town as well as numerous bridges which cross the river Serpis and its tributaries, the Rivers Riquer and Molinar. The medieval part of the town has plenty to explore and enjoy. The main square, the Plaza de España, is where everything happens, including the famous festival of Moors and Christians held in April. Nearby are the La Sarga caves with ancient paintings depicting stags. Because of its altitude, Alcoy is a few degrees cooler than the coast throughout the year and snow has been known in the winter months.

The main square, the Plaza de España, is where everything happens, including the famous festival of  Moors and Christians held in April.

The town is well known for its gastronomy, in particular borreta which is a stew made with cod, potatoes, eggs and spinach and bajoques farcides, which are stuffed peppers using rice, tomato, garlic, parsley and fresh tuna or perhaps pork.

For sporty types, there is plenty on offer. Cycle along the “green route” between Alcoy and Ibi, enjoy horse riding and hiking, climbing and even bungee jumping!

The town is well served with all amenities including a hospital, a wide variety of restaurants (mostly Spanish) and bars, a good public bus service and British schools. Property prices are extremely competitive and expect to pay €230,000 for a five bed finca.