The pleasures of life in sun-drenched Spain are as accessible today as ever, whether you want to play golf and tennis all year, or just sit out in the sun with new friends, or enjoy a more affordable retirement. (Or all of the above!) But where should British expats in Spain choose, that’s easy to reach, beautiful, not too crazy in summer or too quiet in winter? We’ve gone in search of expat paradise…

Every buyer is different and at Spain Property Guides we see those who want to live as far away from their fellow Brits as possible, and those who want to find a settled and friendly English-speaking community. This article is for the second group! We’ve picked a few favourite places where British expats in Spain are assured a lively retirement among good friends.

Although we picked Mijas, because we like it, the whole strip of the Costa del Sol offers a warm and friendly welcome to new arrivals from Britain (and other chillier nations). The appeal of the area goes far beyond the 3,000-plus hours of sunshine you can enjoy here each year (twice the sunshine hours of the UK).

At Spain Property Guides we know there are three professionals you need to ensure a safe purchase in Spain. Click here for a friendly, no-obligation chat about your plans.

Firstly, there is how easy it is to get here. Malaga Airport, with flights to every corner of the UK all year, is just 25 kilometres away. There is an excellent train and bus service so you can do without a car. 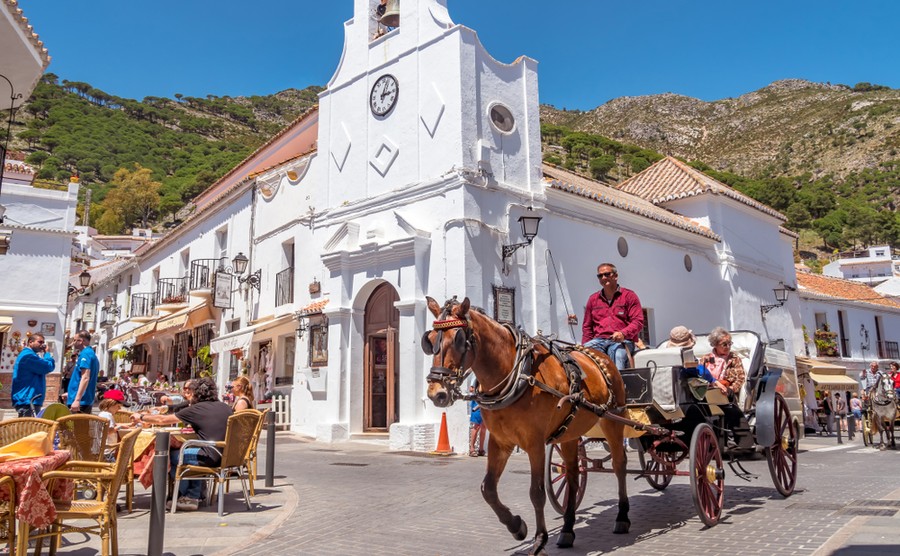 Secondly, there is the variety of things to do. Open a copy of the English-language newspaper Sur in English and you’ll be spoilt for choice, every day and night of the week. Golf is a big part of life here, with dozens of nearby and, crucially, affordable golf courses. (There are plenty of expensive ones too!). The beach is, of course, free all year.

Also of appeal, is the city of Malaga just 30 kilometres or an hour’s train ride away. It’s one of Spain’s most attractive older cities, with a sparkling waterfront, several smart shopping areas with all the top shops, and a terrific atmosphere in the evening. Despite being so close to the expat enclaves, Malaga still feels very Spanish and has some wonderful tapas bars.

Mijas essentially divides into three areas. Mijas Pueblo is the old, Moorish village in the hills a few kilometres inland. It’s a lovely village, quite arty and craftsy, and nicely separated from the summertime noise and crowds of the coastal strip. You’ll find older houses here, including renovation projects from under €200,000. Behind the town is a mountain, Sierra de Mijas, and around Mijas Pueblo are a dozen or so inland urbanisations, some with golf courses such as MIjas Golf, and some of which are essentially villages in their own right.

Heading towards the sea you’ll come to Las Lagunas de Mijas, which extends into Fuengirola. This is the commercial centre of the area.

Running along the coast is Mijas Costa, around a dozen kilometres of seafront which includes La Cala de Mijas and dozens of individual resorts. Apartment prices vary from around €125,000 to €400,000. Detached villas with pools start at around €400,000 and stretch as far around €2,000,000.

The Costa Blanca claims to have the healthiest climate in the world, with 320 days of sunshine. This northern part of the coast is greener and generally more attractive to look at than the south. Being a little further from the two airports at Valencia and Alicante (75 minutes drive) than tourist hotspots such as Benidorm, Dénia tends to attract more people coming to live all year. And there is plenty for expats to do including a Rotary Club, English lending library, international bridge club, Craft Club and University of the 3rd Age. 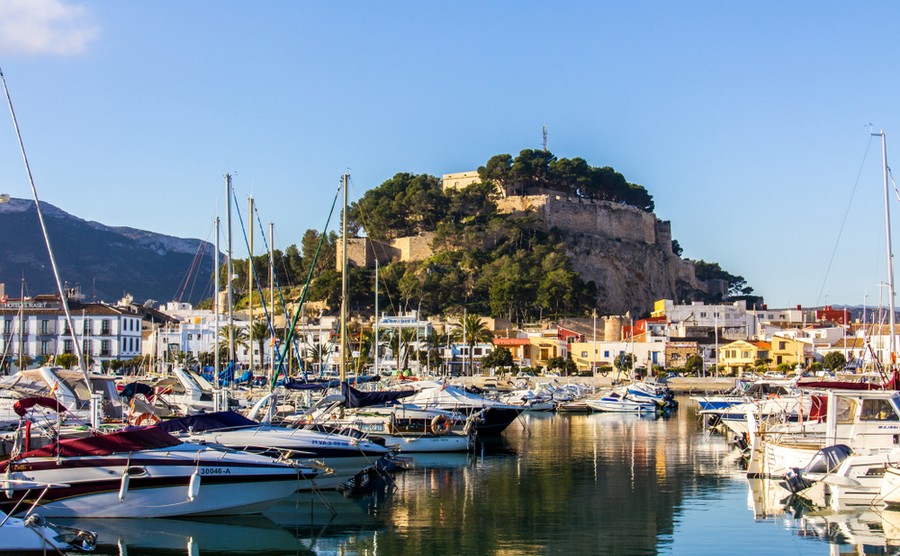 When the grandchildren come over for the summer, if you can tempt them off the 20 kilometres of sandy beach there are waterparks and a safari park, and even an archaeological museum. You may have more success tempting them with the Toy Museum though!

The town of just over 40,000 has options for buying either inside the town or in developments outside. The most well known of these include La Sella Golf Resort and Solana Hills.

Two-bedroom apartments start at under €100,000 and for a good-sized villa with pool you’ll have a wide choice of quality from around €450,000.

Read more about retiring to Dénia and the nearby town of Jávea.

The northernmost Balearic island doesn’t have any flights from the UK in winter – a cunning way of ensuring the year-round community of British people out here provides plenty of entertainment for themselves! Of course you can still get here fairly easily, with frequent flights to Mallorca each day taking 40 minutes.

Those who stay all year will recognise some Georgian architectural features, dating all the way back to when we ruled the island in the mid-1700s. Indeed the Royal Navy was so furious at losing Menorca to the French in 1756 that they shot Admiral Byng by firing squad on the deck of his own ship for not trying hard enough to defend it.

These days, Menorca offers long hot summers and mild winters. There are only around 95,000 people living here permanently, on an island around 50 kilometres across. At opposite ends of the island are the two biggest towns – Mahón, which gave its name to mayonnaise, and Ciutadella de Menorca.

When you do decide to buy in Spain, we recommend Smart Currency Exchange for changing your pounds into euros. Read Smart’s free guide: The Property Buyer’s Guide to Currency.

For entertainment there are some very British pursuits including cricket at the MCC (Menorca Cricket Club) and an Anglican church. There are clubs for everyone from ladies that lunch to pub darts teams. If you love horses, this is definitely an island for you, with the famous 170 kilometre horse-riding route around the coast.

Best of all, Menorca has a lot of wonderful beaches on its south coast. They’re sandy and gently shelving too, perfect for young children. The north is rockier, but has some attractive smaller communities too, such as the village of Fornells.

Menorca is cheaper than Mallorca but you will nevertheless need at least €100,000 for a two-bedroom apartment. Cala en Porter, on the south-east coast and handy for the airport at Mahon, is a good, affordable option.

Villas tend to be modern and low-rise, with good availability from around €250,000.

The British connection to Mojácar goes back 150 years to when British miners arrived to work the hills inland. By the 1930s there was even a British consul here. After the war the mining ended, and while tourists began flocking to the Costa Del Sol to the west and Costa Blanca to the north, Almeria was left behind initially.

However, in the 1960s an enterprising mayor offered out Mojácar’s empty houses to anyone willing to do them up. A community of artistic, bohemian types answered the call, the town recovered and their influence is still felt today. It’s all a bit alternative round here; the nearby Playas de Vera is famous for its naturist beaches with resorts and developments created where clothing is optional. 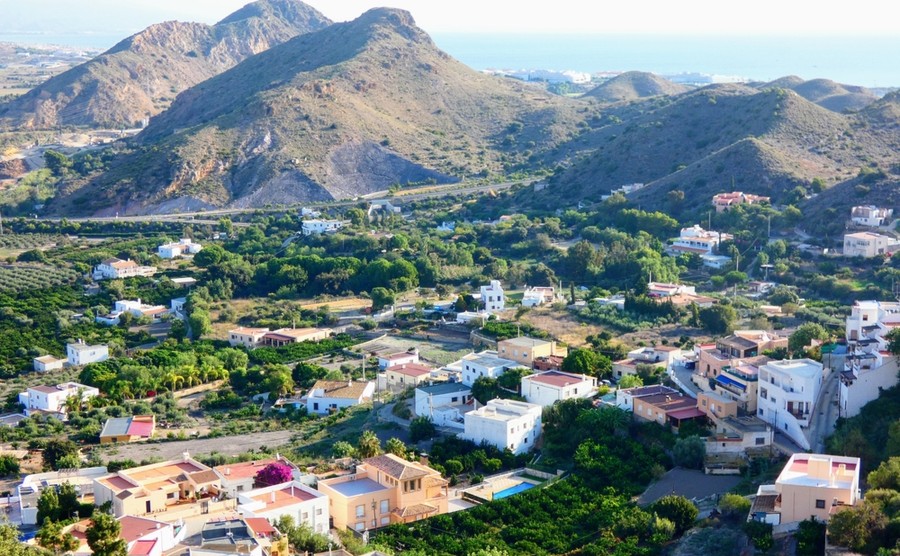 Country homes within sight of the sea, at Mojacar

Like in Mijas Pueblo, the old town, Mojácar Pueblo, is 175m up on the hill; all small white Moorish houses down narrow alleys. A 20-minute walk or so down the hill is the more modern Mojácar Playa by the seaside. There is also Marina de la Torre development a little outside of town, but closer to the neighbouring village of Garrucha.

One downside for many is the distance to the nearest airport; 90km to Almería Airport and around 140/150 to either Granada or Murcia.

Almería is still an affordable area for British expats in Spain, and the distance from the airport ensures that Mojácar is unlikely to ever become another Benidorm or Torremolinos. On the other hand, there is a little less choice than those areas.

A budget of €90,000 will give you a good choice of smaller apartments on modern developments. You’ll need a little more for a place in the old town, if you can find one, or the better quality golf developments.

Townhouses on developments go from around €200,000, but for a detached villa with views of the sea and mountains, but within easy reach of the cafes and beach, you’ll need to be spending north of €350,000. Once you get out to the countryside prices drop quite dramatically.