The Costa Cálida is warm, sporty and affordable

The coast of Murcia wends its way over 200km of sun-drenched Mediterranean beaches and bays. Its warm climate has earned it the name Costa Cálida and its affordable property and relaxed atmosphere has made it a popular option for international buyers, both for holiday homes and retirement. Join us on a tour of Spain’s south-eastern coast.

The word cálida means “warm” and it certainly is, with high temperatures, low annual rainfall and particularly warm water. It’s a coast of cliffs, bays and long, sandy beaches. It is particularly popular area with the British, but also beloved by Spanish tourists and holiday homeowners too. It’s less touristy than the Costa Blanca, less blingy than the Costa Del Sol, and has a healthier climate than either of those two, according to the World Health Organisation.

The Costa Cálida is within the region of Murcia. Elliot Russell, a local estate agent, describes its appeal: “The main appeal of Murcia for me is simply the variety of landscapes. From beautiful new-build apartments on the coast, in places around the Mar Menor, Mazarron or Aguilas, to villas and town houses dotted throughout its many towns and villages. Then there are traditional-style fincas in the north-west region (famous for its wine production), and the rice fields around the picturesque town of Calasparra.”

Sophie Rodriguez, manager of an estate agency with offices in the north of Murcia agrees: “The Costa Calida is appealing to an array of different types of clients due to the diversity of the area. We have many golf courses that will keep even the keenest golfer busy, wonderful beaches, hidden coves & beach chiringitos that would rival any long haul destination!”

Sophie also highlights the convenience of the area from the UK (in normal times anyway!): “Corvera airport is now open and Alicante is only one hour away, so it really has never been easier to get to and from the area.” That ensures there’s a good mix of both full- and part-time residents.”

To be introduced to Elliot or Sophie, our Murcia and Costa Calida property specialists, click here to chat about your plans

Is the Costa Cálida for you?

What kind of people will Murcia and the Costa Cálida appeal to? “It’s perfect for all ages”, says Elliot. The younger generation looking for a fun holiday will love the beach clubs and resorts on the coast, as well as the bustling metropolitan city of Murcia, and the port city of Cartagena. There is also rental potential for people looking for a city break to these cities too. 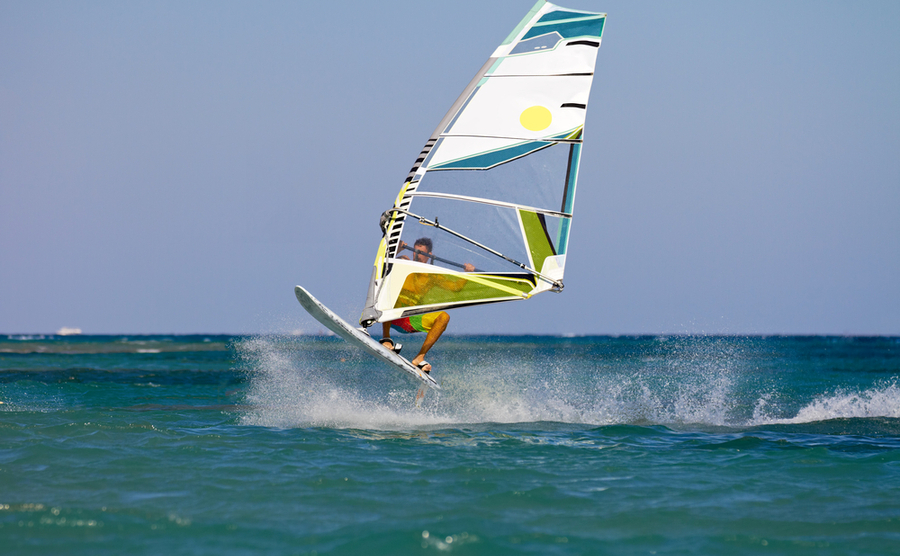 “For couples looking to retire, or simply people looking for a more relaxed lifestyle away from the hustle and bustle, there are dozens of beautiful monasteries, cosy Spanish villages, natural parks and beautiful untouched beaches dotting the coastline,” says Elliot, adding: “There are also 19 world class golf courses to choose from.”

What will you pay?

Sophie Rodriguez says: “One-bedroom apartments start from €58,500 and villas from €130,000, and the area has both resale and new build options available.”

Prices inland and in more southerly regions can be a little lower, as Elliot Russell says: “Starting prices for apartments can be as low at €40,000 or €50,000 across the region. For a three-bedroom villa inland, in towns such as Fortuna and Calasparra, you can start from just over €100,000. If you’re looking for a holiday home by the coast, towns such as San Pedro Del Pinatar, Mazarron and Los Alcazares are some fantastic places to start, all have fun things to do for all ages, such as water sports, golf, beautiful beaches and some of the best seafood restaurants on the coast.”

Now let’s focus in on a few Costa Cálida highlights, starting from the south and working upwards.

At the southern end of the Costa Cálida, the small town of Águilas is a real highlight. It curves attractively around a couple of bays, like so many other lovely Spanish resorts. But it is when you get out of town and stroll along the cliffs that the real appeal becomes clear, a series of beautiful sandy bays. The town may be heaving in summer, but you might have the beach to yourself out of season, yet with the water still warm enough to swim all year, if you’re just a little bit hardy.

The other reason that the town is quieter in winter is the longer distance to an airport, although at just over an hour from San Javier Airport in Murcia (108km) it is hardly that onerous, and you also have the option of Almeria Airport 119km further south.

Town-centre apartments go from €50,000, and these may appeal more than resorts if you’re planning on staying all year. The resort-style property out of town probably costs around 50% more than that, but it has strong rental appeal in summer. There isn’t a great deal of villa accommodation around Águilas, and being that far further south the countryside is beautiful, but quite arid. Although relatively affordable, you’ll still need €300,000 for a really top class detached villa here.

Get ready for when travel restrictions lift by reading your Emigration Guide to find out everything you need to know about moving abroad. 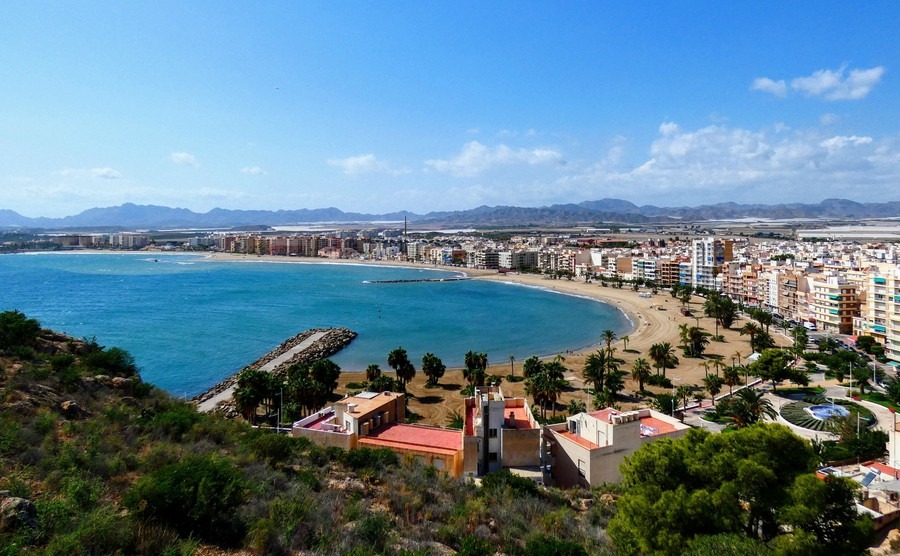 Almost in the centre of the Costa Cálida is the Gulf of Mazarrón: 35 kilometres of beautiful sandy beaches and fishing villages. More than 35,000 people live in this area, with a lively expat community of whom the British are the largest group. This is far from being Little Britain, though there are several British restaurants and shops along the sea front and in the town. But it is less developed than some of the more well-known costas, and considerably quieter in winter.

The port of Mazarrón has good services and amenities. The crystal clear waters have been attracting people for millennia – we know that because marine archaeologists discovered a Phoenician boat here dating from the 7th century BC. The Romans were here too and there is a Roman villa nearby at Alamillo Bay.

The rise in property prices has only just begun to take root here, and there are plenty of apartments for sale from €50,000 and villas from as little as €75,000. Even stunning-looking modern villas with pools are available for under €150,000. Traveling here is easy, as it is just 45 minutes’ drive from San Javier Airport.

Dreaming of a holiday home on the Costa Cálida? Find out what you need to know to turn that dream into a reality in our free guide, How to Buy a Holiday Home in Spain.

Between Mazarrón and El Mar Menor is Cartagena. It’s an attractive town – enriched 100 years ago by zinc, silver and lead mining – with many grand buildings in Spain’s distinctive modernist style. Today it is known for shipbuilding and repair and exports, as well as being one of Spain’s main naval bases. The Spanish authorities are also promoting the port as a major tourist attraction with bars and restaurants on the quayside.

The area is one of the least urbanised on this coast so there are natural, unspoilt beaches, seven of which have the prized Blue Flag. The Roman Theatre of Cartagena was only discovered in 1988 and is now one of the town’s main attractions.

The area is one of the least urbanised on this coast so there are natural, unspoilt beaches, seven of which have the prized Blue Flag.

Another town popular with the British, Cartagena offers good restaurants and all the amenities one needs. The main street, Calle Major, is a pedestrianised haven of shops, cafés, tapas bars, restaurants and some of the town’s most beautiful examples of modernist facades.

You can buy one of those modernist apartments for surprisingly low prices, given that it is still an up-and-coming Spanish city by the sea. Less than €100,000 will get you a renovated two- or three-bedroom apartment. Outside of town there are resort-style developments with communal pools for a similar price, and villas from around €125,000. 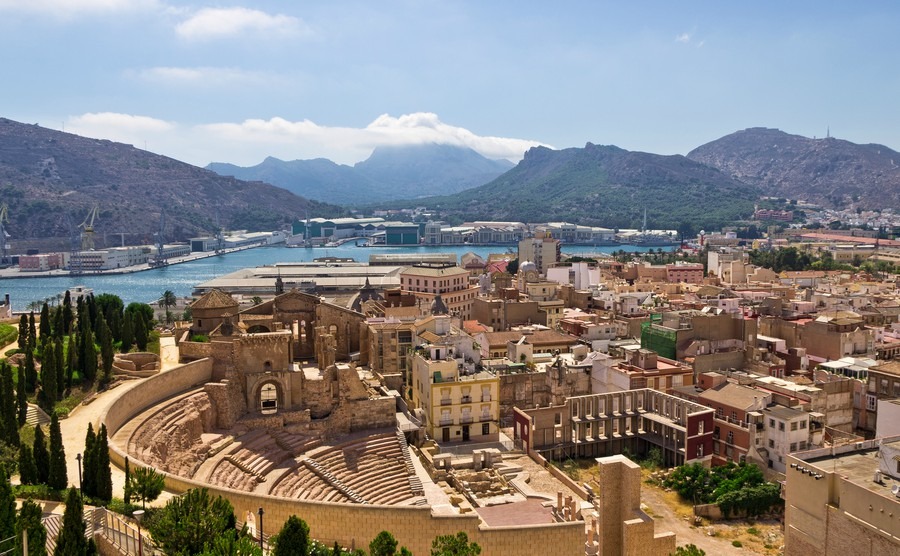 Cartagena, with the Roman theatre

If you are looking to just lie on a beach, this area might not be your first choice. Not that it isn’t hot and beautiful, it’s just that there is such a wealth of sporting activity on offer that you might find yourself tempted to windsurf or spend all afternoon on the golf course.

The Spanish legal system is quite different to the UK one. Get in touch with a trusted solicitor today – they’ll help you avoid any of the legal pitfalls of buying abroad.

Europe’s largest saltwater lagoon, El Mar Menor (the small sea), is separated from the Mediterranean by a narrow strip of land called the La Manga (“the sleeve”). This thin stretch of land, 24 kms long, is quite built up these days with apartment blocks and superb amenities including marinas, supermarkets, sailing schools, leisure centres, shops, bars and restaurants. The real highlight, however, is the lagoon, the perfect place to learn watersports such as wind surfing, sailing, diving and water skiing. If you are looking for a job in Spain, this is a possible area too, with many tourism jobs in summer and a year-round expat population.

People looking for jobs should find it quite easy here as there is a booming tourist trade all year round.

Property is more expensive than other places on the Costa Cálida. The resort of La Manga has increased in price ahead of general Spanish prices. It is rather special though, with golf courses, superb tennis facilities and all the luxurious touches you would expect from Spain’s most famous gated development. Yes, including a private beach. 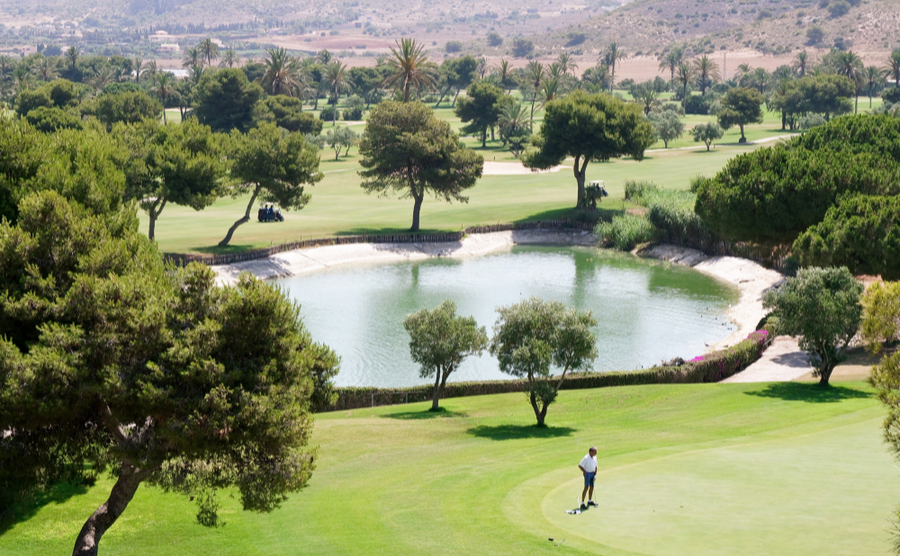 Within the local area there are, however, some delightful villages which are off the tourist track and retain their own traditional lifestyle, bars and restaurants. These are becoming increasingly popular with British buyers too, looking for authenticity and affordability more than spa and beauty treatments on the doorstep as in La Manga.

Sophie Rodriguez highlights Lo Pagan, in the north near San Pedro del Pinatar: “It’s hard to pick a favourite but I really like the Lo Pagan area.” And the appeal is year-round, she says: “I often go on a Sunday in the winter time for a walk around the beach and village area.” Here favourite beach is Calblanque, near the La Manga club: “It’s a hidden gem!”

Towns like Lorca, Totana, Los Alcazares, Balsicas and the village of Sucina are all worth investigating. Totana is a country town of pottery and crafts, popular with those who enjoy hiking. Homes here tend to be larger, detached villas with land, for which you’ll need €200,000-plus. By contrast, Balsicas is another inland town, but this one closer to the more developed areas of the southern Costa Blanca. Here estate agents will be fighting over you if your budget is half that size, as detached villas here are available for €75,000.