How do you like the idea of living somewhere where winter doesn’t exist? It’s completely possible if you buy a property in beguiling, beautiful Lanzarote, the most easterly of Spain’s Canary Islands.

When you first arrive in Lanzarote, its wide open vistas and volcanic calderas can take some getting used to. But you’ll soon find yourself entranced by the island’s unique beauty. There’s just something about Lanzarote! Its friendly people certainly help, and the way that it has been saved from over-development.

Each Canary island fights over who truly owns the title of “isle of eternal spring,” but Lanzarote makes a good case. Although the title is not quite accurate for Lanzarote: The island may not have a winter, but it’s reasonable to say that it has a distinct summer. That said, it merely means that it’s warmer and drier than the rest of the year! The year-round warmth makes Lanzarote a perfect destination if you wish to live the outdoor lifestyle. You can even swim in February.

If you’re moving to Spain, to ensure your pension or income arrives safely and at the best rates, read The Currency Guide to Emigration, free to download. 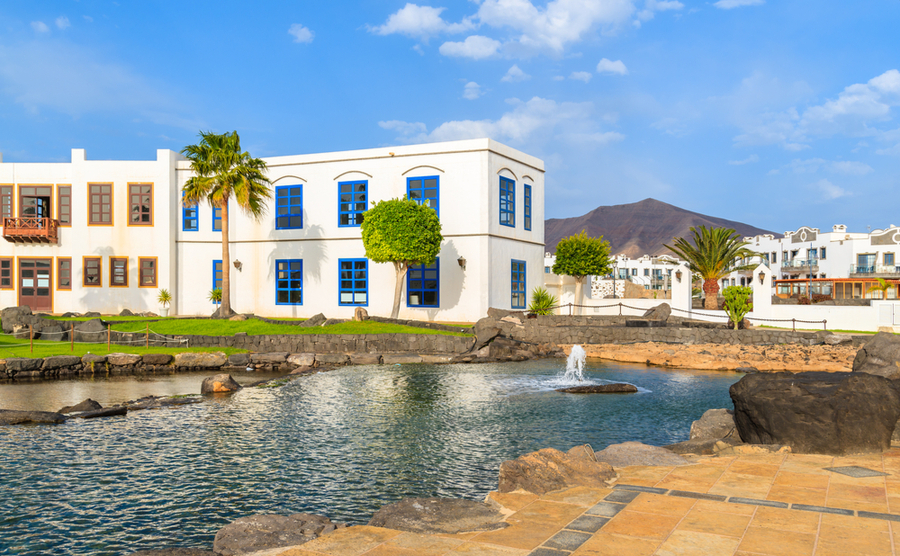 If you’re already familiar with southern Spain or the Balearic islands, you may feel that you know exactly what to expect from Lanzarote. However, it’s a place with a strong identity of its own.

Lanzarote is part of the EU. However, the Canary Islands are treated as an autonomous region by the Spanish government. This creates a few differences in bureaucratic terms. Most significantly, there is a (lower) local sales tax in place of VAT, and the island has a “duty free” status. In real terms, this means that many day to day items are notably cheaper.

The year-round climate also means that the island never “shuts down.” Lanzarote may be quieter in the winter, but there’s no true “off season” period. In fact, plenty of people from northern Europe head to the island between November and March for a guarantee of some winter rays.

The contrast with other resorts is more profound that you might expect. There’s never any “ghost town” feel, and jobs and businesses are year-round. That’s a big plus if you’re thinking of a life in the sun pre-retirement and need to make a living. If you are moving as a young family, the local schools have a solid reputation. There are a couple of international schools on the island too.

Lanzarote enjoys ten hours of average daily sunshine in the summer, and six and seven in January and February respectively. As such, the island’s focus is very much on enjoying that glorious climate.

Lanzarote is ideally suited to those with an active lifestyle. The island has an extensive network of cycle paths and walking routes.

Lanzarote is ideally suited to those with an active lifestyle – whether that means regular gentle exercise or something far more intense. Municipal (i.e. free) facilities abound, and are wonderfully well-maintained. The island has an extensive network of cycle paths and walking routes. Many are dotted with outdoor gymnasiums, several of which have stunning sea views.

Those wanting something more adventurous can head to the island’s other-worldly volcanic landscapes for mountain biking. Or there’s golf at two courses in the south of the island, and every water and boating-based pursuit you could imagine. 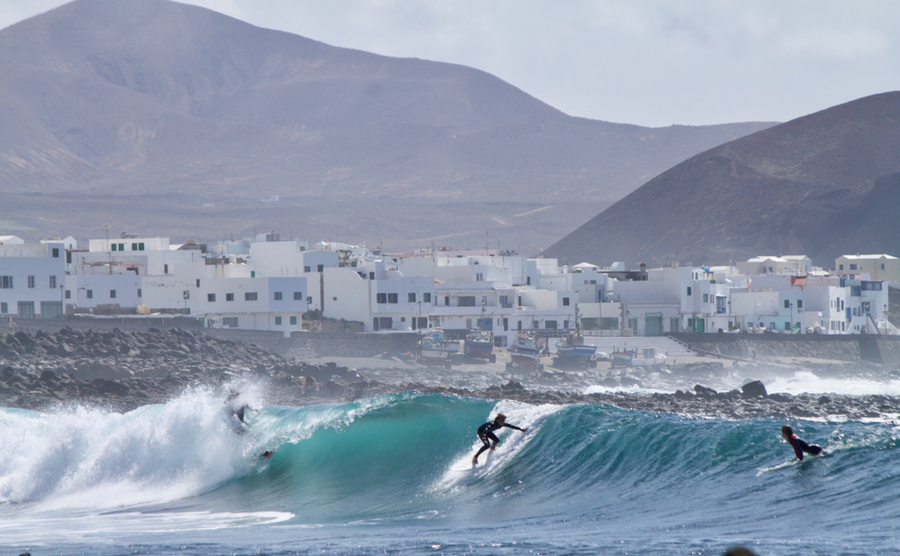 Tourism accounts for 80% of Lanzarote’s income and overseas visitors are the island’s bread and butter. So the island sets out to cater to their every whim – something that residents get to benefit from too. There are first-class amenities and a wide choice of international food and drink, both in local restaurants and at thew supermarket.

Lanzarote is clean, organised and well-managed. The island has also strong eco credentials, both in terms of local recycling, and in larger sustainability projects, such as a huge new wind farm being constructed in 2020.

The flight from the UK to Lanzarote is around four hours long, and the island is well served both from London and from regional airports. While there are obviously seasonal price variations, we were able to find plenty of return flights from as little as £110 when booked in advance.

Lanzarote is a compact island, and it only takes around an hour to drive from north to south or east to west, on gloriously empty and well-kept roads.

But you won’t necessarily need to go to the expense of buying a car. While driving obviously makes it easier to reach rural areas or secluded beaches, there’s a decent bus network covering major towns and resorts too, and fares are inexpensive. It’s also worth noting that much of the island, especially the south, is easy to traverse on foot or by bike. Modern forms of transport such as eBikes and even electric scooters are widely used and very practical for short journeys.

SEARCH homes in Lanzarote quickly and easily via our property portal.

That year-round season is a serious plus to anybody wishing to start a business or look for work. There’s no need to build a business model around making most of your money in just a short summer period.

Due to the abundance of tourists, it is also feasible for English-only speakers to seek and find work. That said, as with anywhere, attempts to speak the local language pay considerable dividends in terms of additional opportunities. It’s also much easier to integrate into the “real” Lanzarote if you speak Spanish. Dealing with paperwork and “red tape” is much more straightforward too.

You won’t be long in Lanzarote before you hear the name César Manrique. A local artist and architect, he saw how mass tourism was starting to destroy the island’s peace and tranquility in the 1970s and started a campaign to preserve it. You’ll notice that away from the main resorts, properties are kept low-level, white and with green shutters. They look gorgeous against the sweeping, grey volcanic landscape. Manrique created his own semi-underground home from three enormous lava bubbles!

You can also buy apartments – they just won’t be on the 10th floor – and modern designer villas.

Buy a home just for long holidays and you’ll be unaffected by Brexit. Read your free guide, How to Buy a Holiday Home in Spain.

Where to buy property in Lanzarote

Broadly speaking, you have three options of where to buy property in Lanzarote:

Lanzarote has three main resorts, all on the south of the island: Puerto del Carmen, Playa Blanca and Costa Teguise. Playa Blanca is the furthest resort from the airport, but still only 30 minutes away.

Living in a resort is incredibly convenient – for everything from shops and restaurants to leisure facilities and job opportunities. However, living in a place with a constant turnover of tourists doesn’t appeal to everybody. And while you will get a little less for your money in a resort, you do have excellent rental opportunities too, all year.

Read more about Buying Property in the Canary Islands in our free guide.

Away from the resorts you find the “real” Lanzarote. This includes most of the north of the island, although some areas including La Santa remain popular with tourists. While the north is still warm and mild, there is more cloud and wind than in the south.

Rural Lanzarote offers more for your money, and a more authentic (and Spanish-speaking) environment. However, the main amenities will be a drive (or bus ride) away, instead of an easy walk. 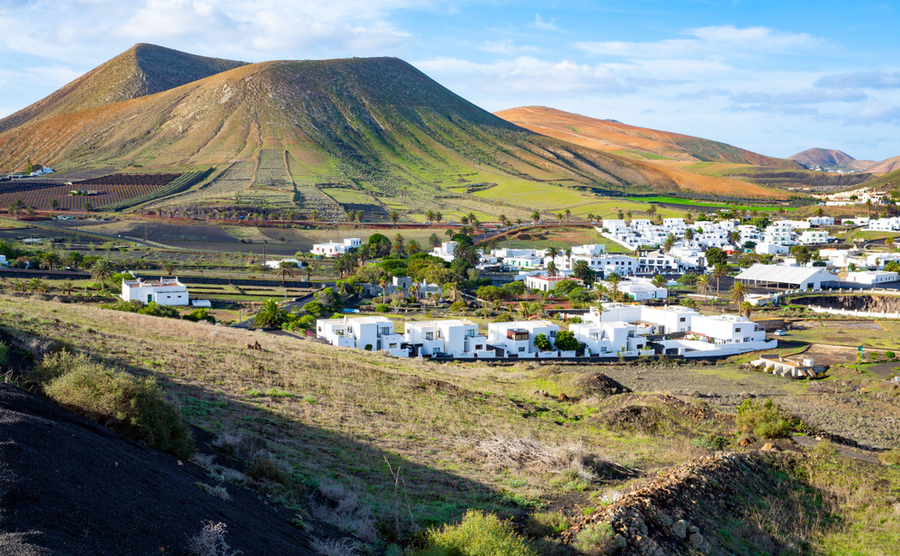 A good middle ground option is buying your property in Lanzarote in a town, or in the agreeable city of Arrecife. This option puts the resorts within easy reach but offers an alternative to living in a purpose built holiday zone. 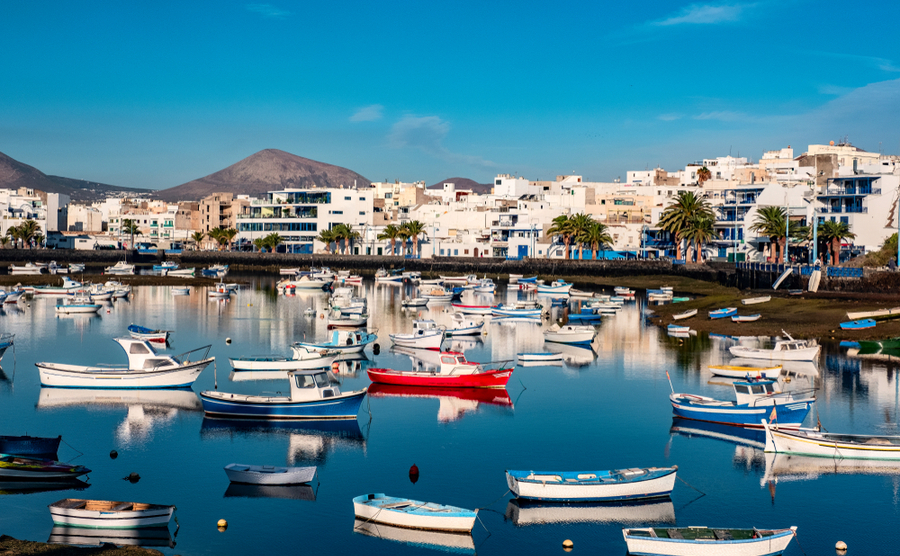 Arrecife itself has a city beach of its own, and is within cycling distance of two of the main resorts – Puerto del Carmen and Costa Teguise. It’s a laid-back place where the Spanish siesta is still observed. The Moorish architecture reminds you of the island’s proximity to the coast of Morocco.

Find properties for sales in Lanzarote on our Spain property portal.