There is a familiar buzzword on the Spanish costas again. “Off-plan”. My recent conversations with Spanish estate agents, as well as the evidence from property shows, reveal that buyers are once again willing to choose a property before a brick has been laid. For bargain hunters, it’s time to look at Spanish off-plan homes again.

Take a tour of resorts along the Costa del Sol and Costa Blanca – Spain’s two key foreign markets – and you’ll notice something new. Cranes are breaking the horizon and new advertising boards are selling off-plan developments. Developers and agents are arming themselves with brochures, scale models and swanky show homes. They’re selling contracts for projects yet to break ground, as well as partially built or newly-completed (key-ready) properties.

Demand for new homes across Spain began to rise consistently last year. Data from Spain’s Office for National Statistics shows that between May 2017 and February 2018, the number of new homes sold in Spain increased every month. Usually by more than 10% compared to the previous year. Only in March this year did this growth slow slightly, arguably as a one-off blip. We’ll have to wait and see. Before May last year, new homes’ sales had been falling for most months going back a number of years. 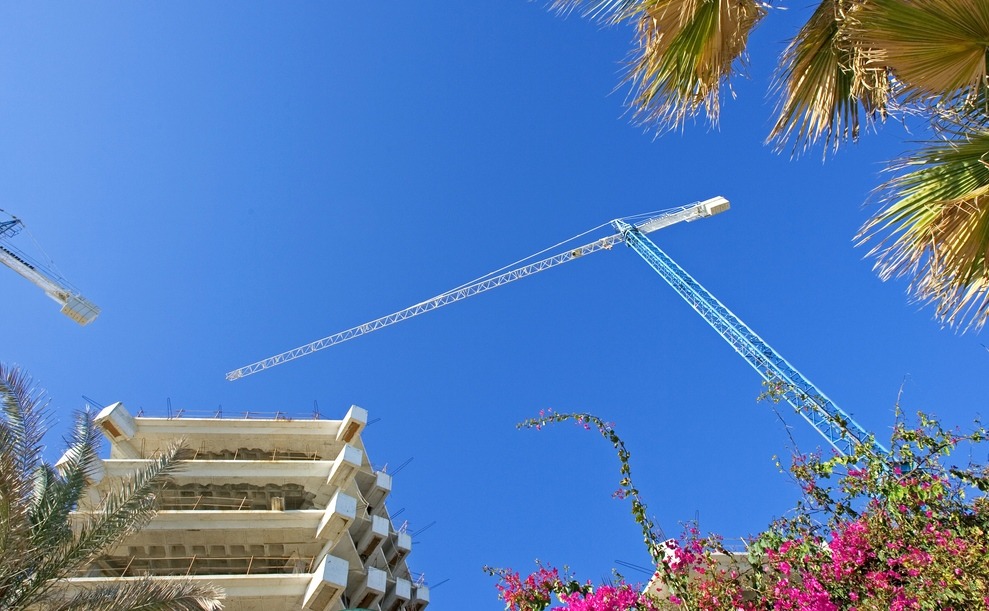 Cranes return to the Spanish skyline. These properties will already have been sold.

Alicante province, essentially the Costa Blanca, now has more new homes under construction than in 2008. This follows five years of consistent growth in construction. This last year there has been a burst of activity, a 33% hike on the previous year, according to Alicante’s association of quantity surveyors, architects and engineers.

So foreigners, Brits included, are buying off-plan with confidence in Spain again. Rewind a few years, and just the mention of off-plan would cause buyers to recoil in fear. It’s understandable. Most of the unfortunate victims left out of pocket by dodgy developers in the heady boom years of the noughties bought off-plan.

There is good news for them too, all is not lost!  An increasing number of buyers who lost deposits through a doomed off-plan purchase in a previous ‘era’ are now recovering their money. Just in time for a new wave of buyers to tap into today’s off-plan opportunities. The hope is the former group have learnt from the latter group.

This is thanks to a number of determined victims and specialist law firms. Their fight with the banks that worked with the now defunct developers, has led them through Spain’s highest courts, and they have emerged victorious. Typically, these cases relate to purchases made a decade or more ago, which have only recently began to be resolved. In most such cases, developers breached contracts by failing to complete a property or completing it years after the agreed completion date. In the meantime they failed to repay buyers their deposits.

Still worried about your money? Spain Property Guides can put you in touch with the very best lawyers, estate agents and international payments specialists in Spain, for total peace of mind. Get in touch with your Golden Three here.

Pivotal to the success of these cases has been the ability for lawyers to prove that a particular Spanish law, namely LEY 57/1968, was applicable to banks. According to this law, banks were liable for guaranteeing any deposits or advance payments they were holding for off-plan purchases. They were, in fact, as liable as the developer promoting the property. Equally significant, the courts are now ordering banks to pay back deposits with interest back-dated to when the funds were first received by the bank. Previously, interest would typically have been due from the date that the buyer made their first claim. This would usually be against the developer.

I just received a press release from one law firm who forced a bank to refund off-plan buyers at a project in Fuengirola. This was the third such communication this year from the law firm. Another successful ruling was in January. In this, the courts ordered a bank to return almost €300,000 to a British couple. The couple had made payments towards an off-plan property in the Costa Blanca back in 2003 and 2004. This repayment included legal costs and interest.

One couple I interviewed last year had purchased an off-plan property in Fuertenventura back in 2006. They neither employed an independent lawyer during the buying process nor insisted on a bank guarantee for their deposit. With a deposit worth €107,000,  arguably doing the first would have ensured the second happened. However, in 2016 they won back their deposit with interest through the courts.

It has been heartbreaking over the years to hear people tell me about losing their money. I cannot tell you how thrilled I am to see British buyers finally getting their money back, with interest! And with the repayments coming back from banks, not individual developers, victims can be assured of receiving the money.

Entering into an off-plan contract without employing an independent lawyer seems like madness in today’s post-crash world. To be honest, it was foolhardy 10 or 20 years ago too. At the least they will check your contracts and ensure you are protected by the appropriate bank guarantees.

With the right legal mechanisms in place, buyers of Spanish off-plan homes in 2018 should feel perfectly safe. What no-one can guarantee or protect is the long-term value of their property. Markets will dictate this and no-one really knows how long a property market will rise or when it will fall.

As a rule, and for a number of reasons, newer properties will always be more expensive than resales. So when researching a purchase, be sure to look at similar off-plan projects as well as resales. Are they equivalent in terms of size, location and amenities? Even better, if you’re considering somewhere that is part of the new phase of an existing development, compare it with units for sale on previous phases. Get a feel for what you believe is a fair price.

Don’t get ripped off on prices. For more great tips on getting the best price, brush up on your negotiating skills with our guide, How to Negotiate Abroad.

And don’t rely on your sparkling new home appreciating in value rapidly, like the speculators of 10-15 years ago. No-one wants to buy an asset that immediately starts depreciating in value, but significant capital growth shouldn’t be a key driver for anyone buying for lifestyle reasons.

Many people I’ve spoken to over time have seen a hefty rise in the value of their Spanish home, but that’s happened almost by default. Their focus over their many years, often decades, of ownership has been on getting the most out of their property, enjoying family holiday and creating happy memories there. And you can’t put a price on memories.