We wish you a merry Spanish Christmas

From playing the lottery to swallowing grapes, Christmas and New Year is certainly unique in Spain. Don’t forget to wear your red underwear or feed your little log!

Christmas is nearly upon us once again: the trees are laden with baubles, the Christmas lights are glowing and the shops are doing a roaring trade. However, in Spain Christmas isn’t the main holiday – for that you have to wait till 6th January for the festival of The Three Kings. Here’s a quick look at how your Christmas 2018 schedule might pan out once you’ve made the move.

The grand Christmas lottery, known as El Gordo, is one of the most eagerly awaited events of the year in Spain.

This is one of the most eagerly awaited events of the year in Spain: the grand Christmas lottery, known as El Gordo. There are literally thousands of prizes to be won, some very large and some quite small, but there is a fair chance you will win something back. Tradition demands that young schoolgirls “sing” the winning numbers with most of Span glued to TV screens to see if Christmas has come early. A stake as small as €5 can see a substantial win. It’s crazy, it’s fun and it’s very Spanish.

Midnight Mass is the central activity on Christmas Eve – Nochebuena in Spain. Traditionally families have a simple meal made from basic ingredients such as a soup and fish, before going to church or more likely these days, going out on the town.

In Catalonia they have a strange tradition called “el tió” which is a log with a funny face and silly red hat. During the days before Christmas the family “feed” the log with sweets, nuts and other small delights. Then on 24th December they beat it with sticks, singing traditional songs to make the log “poo” its goodies which are then distributed amongst the children. Strange indeed! 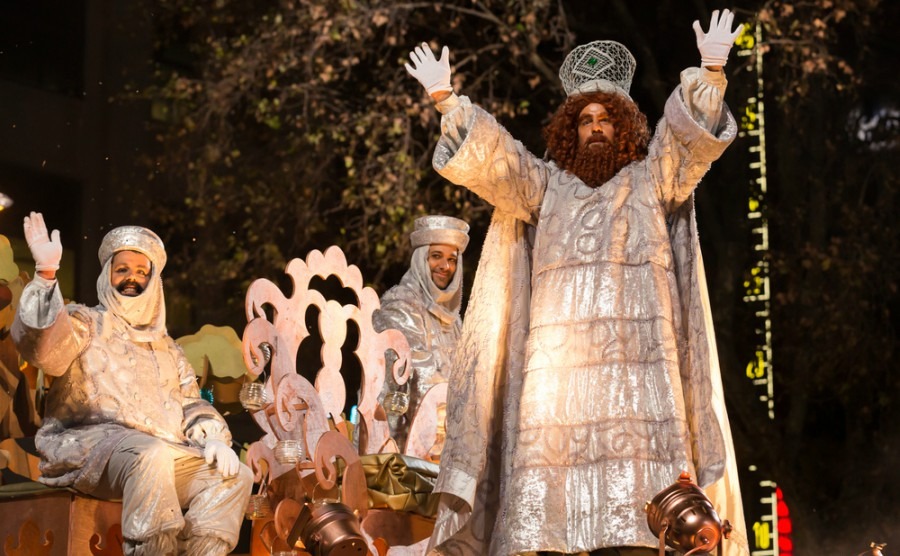 The arrival of the Three Kings. (Iakov Filimonov / Shutterstock.com)

Another day spent with the family, Christmas Day is not the traditional day for giving gifts – that is reserved for Epiphany on 6th January. However globalisation and American influences have now made this a day for exchanging gifts in Spain, allowing children more time to play with them before returning to school. Even Papá Noel (Father Christmas) is becoming popular, though he is not the traditional bearer of presents as that accolade falls upon the 3 Kings (Tres Reyes) on the eve of Epiphany, the 5th January. In fact, many say that Papá Noel will supersede the Magi in Spain and yet another Iberian traditional would be lost.

If you are ready to take the next step, you need a good lawyer, a brilliant estate agent, and the best currency exchange company. We can introduce you to all free, with no hassle or sales calls. Read our guide to the Golden Three – like your very own Three Kings.

Boxing Day is not widely celebrated in Spain, though several autonomous regions do observe St. Stephen’s Day, including Catalonia and the Balearic Islands where government and public offices are closed, as are most shops.

The 28th December is another strange day in most of Spain. Día de los santos inocentes (Day of The Innocent Saints) is akin to April Fools’ Day in Britain. The TV channels present silly stories and people try to make each other believe crazy jokes.

The day of Epiphany (6th January) has traditionally been the day to exchange gifts after.

The Spanish like most people celebrate 31st December in a big way, but in a very “Spanish” way. Probably due to a glut of grapes, farmers came up with an idea which has become a tradition: on each strike of the clock at midnight everyone must swallow a grape, so that’s 12 grapes in 12 seconds! Sounds impossible? Well, it can be done though very few manage it. The grapes purportedly bring good luck if you manage to swallow all of them by the last strike of the clock.

Then there is gold in the cava. Just before the midnight cheer, Spaniards drop some gold into their glass of bubbly, as this also supposedly brings good luck – but only if you down the contents in one go after midnight and remove the gold ring or whatever you have dropped into the glass.

Red underwear is a must on New Year’s Eve if you are looking for love! In some areas of Spain the garment must be a gift, but a more interesting tradition is that you are supposed to give away the red under garment by the end of the night in order for the love charm to work. After midnight you all go out and party until dawn and hopefully get luck!

The day of Epiphany (6th January) has traditionally been the day to exchange gifts after the Three Kings have arrived the evening before. The Three Kings, or Magi, come to town in a variety of ways, often in a long cavalcade on horseback or in a chariot. Hundreds of eager children line the streets waiting to catch some of the sweets the Kings throw into the crowds. In towns by the sea, they arrive in boat and then parade through the streets to a throne from where they dispense sweets and other small goodies.

Families gather on 6th January to eat a special cake called Rosca de Reyes (King’s Bread) which is circular and hollow in the centre to replicate a crown. Hidden somewhere in the cake is a tiny figurine of Jesus and whoever finds this in their portion is King for the day. The downside to this is that if you are an adult you have buy next year’s cake and they are not cheap!