Your winter sun is waiting for you

Seven is a lucky number and the Romans named them “the Fortunate Islands”, so the signs are positive that buying in the seven Canary Islands will work out well for you. Easy to reach all year and warm all year, no wonder they are popular with international home hunters.

Located in the Atlantic Ocean off the coast of North Africa, the Canary islands are a Spanish Autonomous Community and the most westerly part of the European Union. A favourite holiday spot for people from all over the world, especially those from northern European countries, the islands’ subtropical climate also attracts overseas property buyers as well.

Each island has a different geology, landscape and way of life.

Altogether there are seven islands in the archipelago, the largest being Tenerife and the smallest, El Hierro. Each island has a different geology, landscape and way of life. 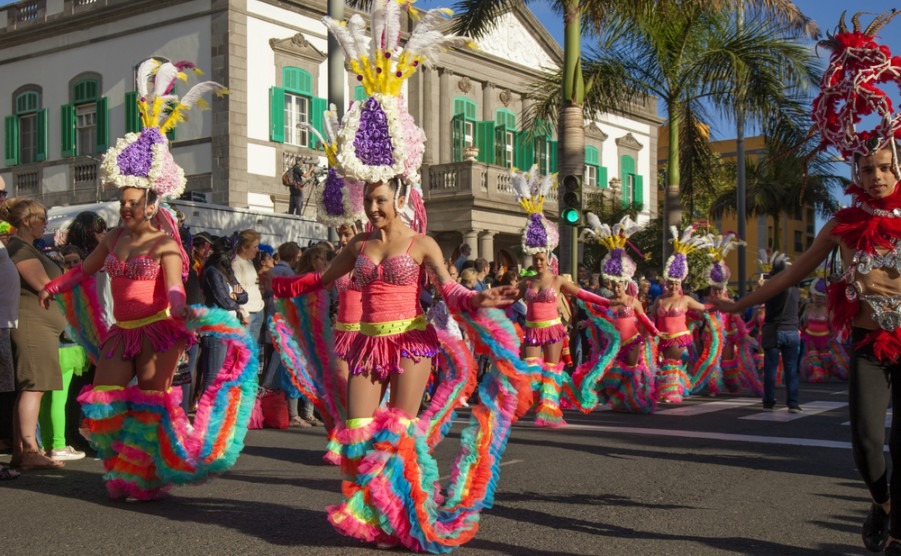 Gran Canaria is the second most populated of the islands with around 850,000 inhabitants. It is of volcanic origin, with mountains reaching up almost 2,000 metres. Originally the island was made up mostly of forests, but following the Spanish conquest in 1478 much of it was felled to build the ships that conquered Spain’s empire, and for land cultivation. Thankfully there was a major reforestation drive during the 20th century and much of the forest has recovered.

If you are ready to buy a home in Spain, Property Guides will be at Your Overseas Home. It’s a new style of property show, where those serious about buying can get answers to detailed questions and introductions to trusted lawyers, agents and currency providers. Click here to apply for FREE tickets to shows in London, Manchester and Glasgow this spring.

The island has a good road system, including a motorway, and an international airport near the capital, Las Palmas. It has a wonderful climate with average temperatures reaching a warm 20°C in winter and 26°C in summer. The mountains experience some frost and snow, and the island as a whole has patchy rainfall resulting in some areas being particularly dry and others with quite lush vegetation.

Gran Canaria has a wonderful climate with average temperatures reaching a warm 20°C in winter and 26°C in summer.

The south coast is warmest and it’s here you will find the most popular tourist areas. There are six nature reserves and two national parks to enjoy while about one third of the island is protected by UNESCO as a Biosphere reserve.

Rental prices vary across the island and in the more expensive southern area you can expect to pay €650 a month for a two- or three-bedroom family house. Away from the main tourist towns you might only have to pay €450. For home owners the good news is that there isn’t anything akin to council taxes, but as in the rest of Spain there are community charges if you live in a block of apartments or an urbanisation.
The island is family friendly with safe beaches and pleasant walks between Maspalomas and Playa del Inglés. Las Palmas is famous for its Carnival in February and is a thriving capital city, with plenty to keep everyone in the family occupied. 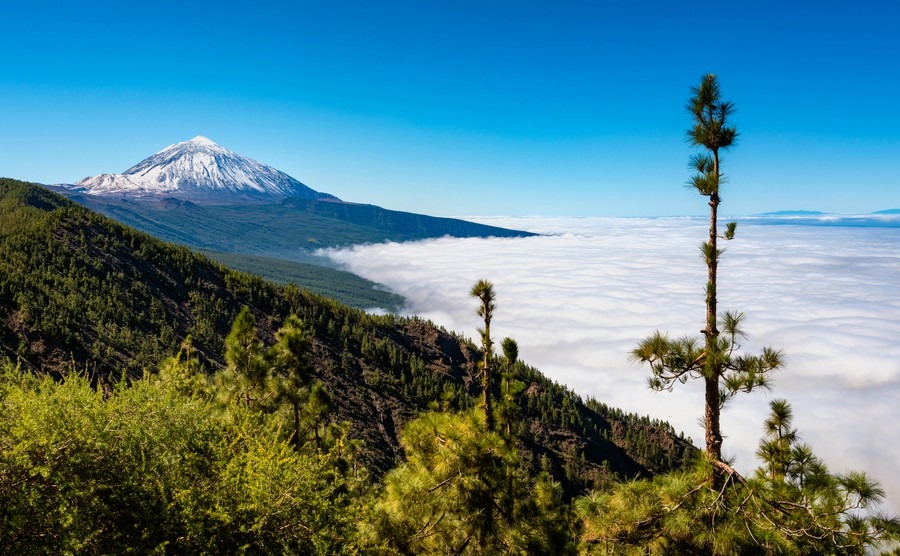 Mount Teide rises atop the clouds in Tenerife

Tenerife (The Island of Eternal Spring)

The capital and port of Santa Cruz de Tenerife lies on the north-east coast of the island and boasts 58 kilometres of beach. Tenerife is the ultimate holiday destination, with hotels of every description, golf courses and a very warm climate. It is also a volcanic island with a rugged landscape. The northern beaches are made up of pebbles or black sand with almost 50% protected to preserve its special flora and fauna.

Tenerife is around four hours from Britain by air and welcomes around 200 flights each week.
There are English schools and the medical services are first-class. Almost 30,000 British people live on the island allowing access to all things British: newspapers, food, drink and entertainment. In fact, there are numerous restaurants of every type of cuisine including Indian and Thai, much loved by people from the UK.

Why not split the cost and double the fun of holiday homeownership abroad by buying with family members? Read our new guide, Buying Abroad with Family.

Sports of all kinds are available from horse-riding to windsurfing. The climate allows for year-round exercise and keen golfer are well catered for by scenic courses. A two-bed townhouse in Arona is currently for sale with Rightmove for €195,000, while €327,000 will buy you a two-bed apartment in Playa de las Americas. 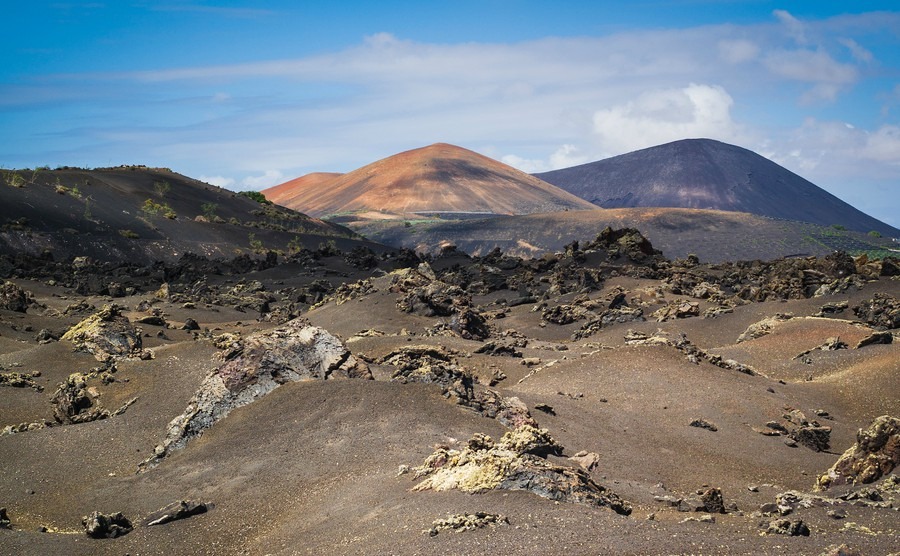 The third most populated of the Canary Islands, Lanzarote it is the most northern and eastern of the archipelago and is just 140 kilometres from the coast of Morocco. It is classified as sub-desert due to its low rainfall and its subtropical temperate climate. It is a windy island with the sirocco blowing directly from Africa, which like Gran Canaria is great for windsurfers.

Lanzarote has a spectacular if stark landscape, with two mountainous areas and the Timanfaya National Park.

It has a spectacular if stark landscape, with two mountainous areas and the Timanfaya National Park which is home to 25 volcanoes and lava fields. Agriculture thrives thanks to its fertile volcanic soil resulting in its world-famous onions, sweet potatoes, potatoes, lentils and pumpkins.

The 6,000 or so Britons account for the largest number of foreign residents, with easy access from many UK airports. There is an English school and even an Ikea when it comes to furnishing your new home. 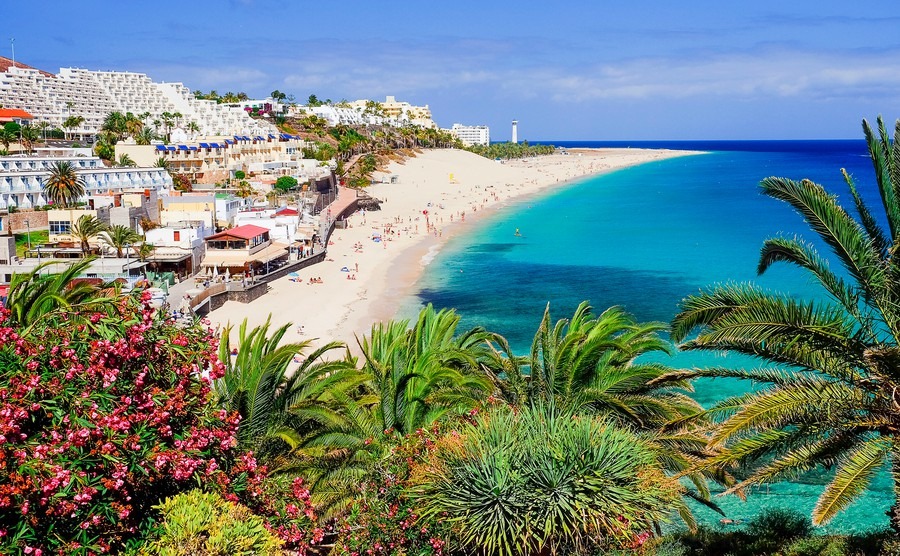 In recent years more and more people have chosen to move to the region’s second largest island. Fuerteventura is home to 77 beaches along its 326 kilometres of coastline and an average temperature of 21°C throughout the year.

The island doesn’t have an English school, the nearest being on Lanzarote. Around 28% of the island’s inhabitants are from other countries, with Britons accounting for 20% of non-Spaniards. Another popular tourist island, Fuerteventura welcomes 18,000 British holidaymakers each month.

Fuerteventura has often been described as a way of life close to living in Britain in years gone by, which will suit many people but might be too quiet for others.

This island offers a laid back existence and music festivals are common, as are kitesurfing festivals. It has often been described as a way of life close to living in Britain in years gone by, which will suit many people but might be too quiet for others.

The main employment area is tourism and you will normally have to have a basic knowledge of Spanish to find a job here. The island has its own airport, roads have recently been improved and there are several websites which connect expats on the island and other islands in the archipelago. 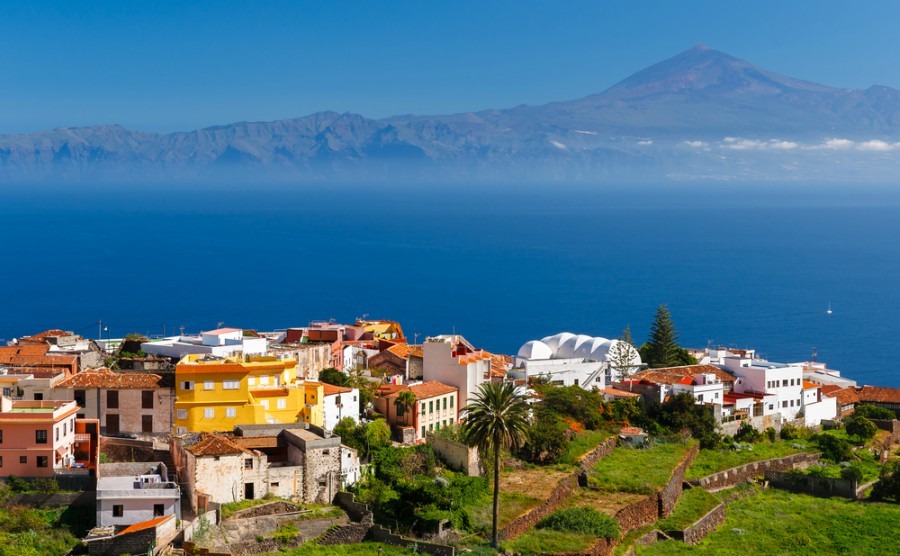 La Gomera, with Tenerife in the distance

The Canaries’ three smallest islands lie to the west. La Palma now has its own airport, which caters for an increasing number of holidaymakers. It is particularly popular with trekkers and walkers who come to enjoy its 600 miles of scenic footpaths. It is also the steepest island with wonderful viewpoints high up in the mountains.

La Gomera is popular with big cruise ships, which has brought this small island to the world’s attention. Its airport is not suitable for charter flights and larger planes, so the island is accessed by boat in around an hour from Tenerife. There is a national Parador hotel located in San Sebastian and there are also some charming timeshare rentals as well as small hotels. Property here is a little less expensive than on other islands, but you could pay up to €500,000 for a villa adjoining a golf course in the south of the island.

El Hierro is an island not plagued by excessive tourism. It is wild and beautiful with a small population of around 11,000 inhabitants. There is only one secondary school on the island and the shops are traditionally old-fashioned and all the more delightful for that. Most properties for sale are rustic in design and there are practically no high-rise eyesores clinging to the coast. Fincas cost anywhere from €100,000 to well over one million euros.