Visitors to Spain should be aware of laws concerning what can be worn on and off the beach. At present, the authorities are more concerned with what people wear in the streets than on the sand.

Following the horrific terrorist attack in Nice in July, several mayors of French seaside resorts have sought to ban Muslim women from wearing burkinis on the beaches, claiming that they defy laws on secularism. The burkini, women’s swimwear that covers the whole body, has become a hotly debated subject both in France and now in Spain, as civil rights’ representatives claim the ban is racist and women should be allowed to wear what they want on the beach. The French Highest Administrative Court agreed and ordered the ban to be suspended.

There are no laws in Spain saying what a person should wear on a public beach.

No Spanish laws on beach attire

There are, however, local laws which ban people from wearing beachwear off the beach. In Majorca for example, you could face a fine of up to €500 for walking around in swimwear, bare-chested or in speedos in the streets. It is deemed a matter of “etiquette” and “respect”. The behaviour of some visitors prompted local councils to introduce the ban. Barcelona in fact banned the wearing of bikinis in public places except on the beach in 2011.

There are, however, local laws which ban people from wearing beachwear off the beach.

The Deputy Mayor of Barcelona, the capital city of Catalonia, has confirmed that there will be no ban on the wearing of burkinis on the city’s beaches. Gerado Pisarello said “Our main concern is that women can dress and swim as they like, that they have the freedom to do so.”

Catalonia has the largest Muslim population in Spain, making up around 6.5% of the inhabitants of Barcelona. Surprisingly you won’t often see the burkini on the local beaches.

Some of Spain’s water parks do not allow the wearing of clothes with long sleeves but this is not for political or religious reasons, rather for safety on attractions like water slides. Water parks are very popular and often become crowded in the peak season, so the question of safety is of prime concern. Baggy and loose clothing is also prohibited for the same reason.

Lleida in the north of Catalonia is the first town to ban burkinis in public swimming pools on the grounds of safety and hygiene. “Use of proper swimming costumes or bikinis is required” as far the local council is concerned. 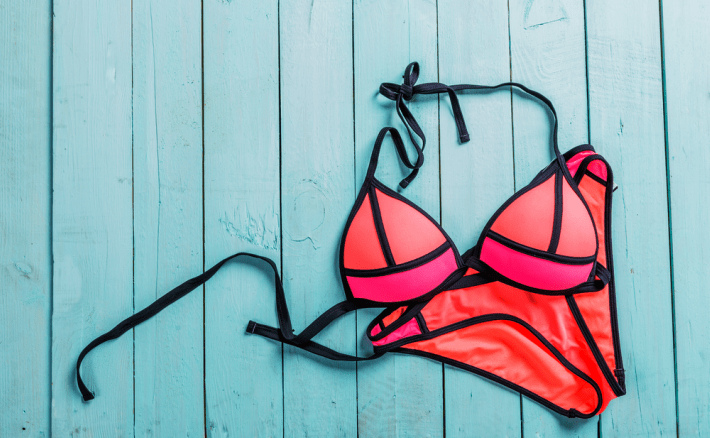 In the 1950s, the arrival of the bikini caused outrage.

Way back in the 1950s the arrival of the bikini caused outrage, particularly in the Catholic Mediterranean countries, Spain amongst them. Even the Vatican became involved and the bikini was banned from most beaches. It was during the 1960s that the bikini became popular after being featured in several films and gradually it was accepted on the beaches by the Med. The lifting of the ban when Spain returned to democracy boosted its tourism which has now become its major industry and contributor to the country’s economy.

“Our main concern is that women can dress and swim as they like, that they have the freedom to do so.”

A number of Spanish people are calling for the prohibition of burkinis, encouraged by right wing newspapers who have run polls on the subject and invariably show in the region of 85% of readers in favour. Meanwhile, Spanish civil rights’ movements are fighting any suggestion of a ban with online petitions and demonstrations.

However, with such a large Muslim population, Spain has a careful line to tread as generally speaking there are good relations between the communities and it won’t want to do anything to discourage tourists from coming to its many wonderful beaches.