Tourism is Booming in Spain

The first half of 2016 has seen an increase in tourism numbers as holiday-markers turn to Spain as a safe-haven.

Spain is experiencing a record-breaking year in Tourism, driven by a wave of tourists seeking safer shores after terrorism attacks and political instability in the popular tourist destinations of France, Egypt and Turkey. A relatively strong euro is another explanation for the surge in visitor numbers, as Europeans take advantage of their strong purchasing power. With one of the highest unemployment levels in Europe – a record setting 20 percent – this boost to tourism is creating jobs for locals and coming at the perfect time, as Spain’s economy strengthens largely from its thriving tourism.

Spain is experiencing a record-breaking year in Tourism.

In the first half of 2016, nearly 33 million people visited Spain, a 12 percent increase from the same period in 2015. Tourist spend also increased, up 12.7 percent compared to the same time last year. As Spain climbs out of a recession this boost in tourism couldn’t come at a better time. Tourism makes up 14 percent of the country’s GDP, and in August, the jobless rate fell to its lowest rate since 2009 with 50,000 of the 84,000 jobs created in the service sector. 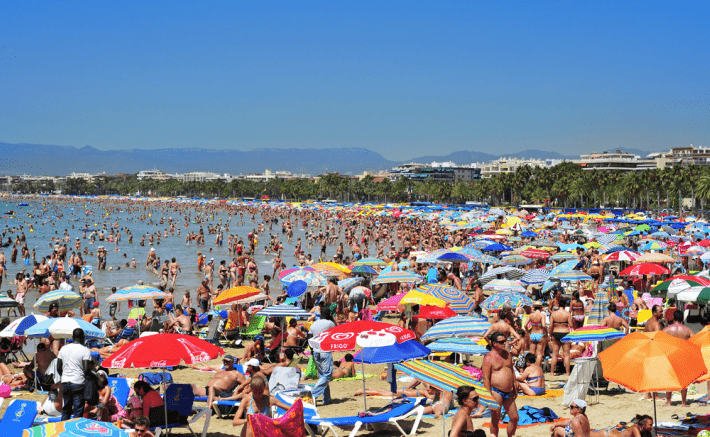 In the first half of 2016, nearly 33 million people visited Spain. nito / Shutterstock.com.

There is some concern that these tourist numbers may not be sustainable. The biggest worry is about British purchasing power since the referendum vote, as sterling has decreased in value. Adding to this concern is the UK interest rate cut, which has further reduced the spending power of Britons. The British are the largest visitor group holidaying in Spain, with eight million British tourists visiting Spain in the first six months of 2016. The next largest country for visitor numbers is Germany, with 4.9 million visitors in the first six months, and France with 4.5 million visitors.

Despite the expected drop in British tourists visiting Spain, many holidaymakers are turning to Spain as a safe alternative to other parts of Europe, Africa and the Middle East. Egypt has experienced a 60 percent drop in tourism numbers this year, and hotel bookings in France’s southern Riviera region fell up to 30 percent after the terror attacks in Nice. Spain is not without its own terrorist attacks, however, but it does appear to have reclaimed its safe status after the 2004 bombings by Al-Qaeda at Madrid’s Atocha Railway.

Despite the expected drop in British tourists many holiday makers are turning to Spain as a safe alternative to other parts of Europe.

The most popular tourism destination in June was the Balearics, which recorded a whopping two million visitors. Also popular were Catalonia’s Barcelona and Costa Brava, with Benidorm on the Costa Blanca currently experiencing the highest hotel occupancy in 16 years.

Positive tourist numbers in Spain are not only great for the country’s economy, but also for foreign investors looking to rent out holiday homes for profit. The real estate market in Spain is also picking up pace, with savvy investors buying under-valued Spanish property that still remains affordable despite the drop in the pound.