This week’s news from Spain

Will the British and Spanish governments agree over the rights of their nationals once Britain leaves the EU and what deal might be agreed? Should Spain “lose” an hour? Can Barcelona maintain growth in tourism?

The Spanish government has put forward a proposal to return Spain to Greenwich Mean Time (GMT), also known Coordinated Universal Time (UTC), which would put it in the same time zone as Portugal and the UK. It says this will provide a better work/life balance for Spaniards by making it darker in the evenings and encouraging the Spanish to go to bed earlier as they gradually switch to a more northern-European-style working day of 9 to 5. Many local authorities are in favour. Spain was using GMT Prior to World War II and it is said that General Franco changed it so that the country was on the same time as Germany.

Being further south, however, Spain benefits from longer winter days than the UK.

Voices have now been raised against the idea, however, backed up by some in the scientific community. Dr Jorge Mira, Head of Applied Physics at the University of Santiago de Compostela says that “turning the clocks back would solve nothing and would even bring more problems.” He claims that those in favour of putting back the clocks are visualising a flat map, when in fact the world is round and that Spain is currently in the correct time zone. He also suggests that the country would continue as it is now, whether the clocks are put back or not.

It was General de Gaulle, says Mr Mira, who wanted France to be on Central European Time (CET) after the end of the Second World War and Spain chose to go along with its neighbour.

He and scientist colleagues say there is no evidence that Spanish people would spend more time at leisure if Spain moved to GMT as time zones in themselves have little to do with the time spent at work or at home. Time is simply a number, they say, while work/life balance depends on how long you spend at work or at home. 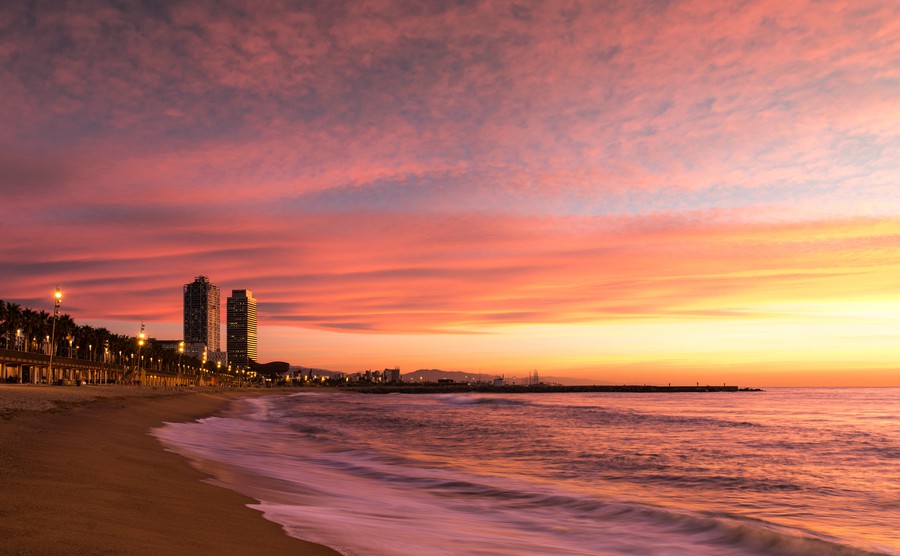 Should this sunrise in Barcelona be an hour earlier?

For most holidaymakers and vacation home-owners an hour less of light in the evening sounds like a negative. Currently, sunrise in Spain in mid-July is around 7am and sunset at 9.40pm. Pushing the clocks back will align it better with British sunlight hours, where sunrise in July is at 5am and sunset at around 9pm. Of course, many in the south of England want to be on the same hours that Spain currently enjoys. Being further south, Spain benefits from longer winter days but shorter summer days. Tomorrow, for example, 8th February, London sees sunrise at 7 and sunset at 5pm, while Madrid’s day lasts from 8.15am to nearly 7 in the evening.

May and Rajoy discuss expat rights

Prior to an informal summit of EU leaders being held in Malta, British Prime Minister, Theresa May spent 25 minutes talking to her Spanish counterpart, Mariano Rajoy about the rights of expats after Britain leaves the EU. It is a matter of concern for both as there are around 300,000 British nationals registered as living in Spain and 200,000 Spaniards living in the United Kingdom.

The two prime ministers agreed that Britain’s departure from the EU “must not damage the interests of Spanish and British citizens.

Spanish newspaper El Pais reported that the two prime ministers agreed that Britain’s departure from the EU “must not damage the interests of Spanish and British citizens.” Mr Rajoy asked Mrs May to ensure the negotiations were dealt with swiftly and with the priority issue being not to harm Spaniards living in Britain or British people living in Spain.

Barcelona, capital of Catalonia, is suffering from its own success as a tourist destination with property owners renting out apartments to tourists rather than to locals as they can earn considerably more money. The mayor and council are looking at ways to make rentals more affordable for local people and to halt the rise in tourist numbers. Barcelona is now the 10th most visited city in the world (according to Forbes magazine) with well over 8 million visitors a year.

The council is considering raising the property tax (IBI), Impuesto sobre bienes inmuebles urbana / rustica, on apartments which are rented out to tourists, so creating a two-tier property tax system, with a lower rate for owner/occupiers or long term rentals.

For those living in Spain and for tourists there will be some new routes offered by low cost airline Ryanair from Madrid and Barcelona. From this month passengers will be able to fly from Spain’s capital to Glasgow as well as to Bari in Italy and to Prague. Additional flights from Barcelona will go to Venice, Prague, Luxembourg and Krakow.

Currently Ryanair has flights from Madrid and Barcelona to London Stansted, Birmingham, Manchester and Newcastle. The addition of Glasgow – Madrid will be welcomed by many Scottish expats