Homes to enjoy spring and almond blossom in Spain

If you’re planning to come over and buy a property in Spain, the spring is a wonderful time to come. Not too hot, and with the blossom out on the almond trees. But where is spring most beautiful in Spain, and where should you start your property search?

People in both mainland Europe and the United Kingdom are looking forward to the clocks going forward an hour on 27th March, giving us lighter evenings and longer days. Spring officially begins on 20/21st March, though here in Spain, we have had some very spring-like days already this year!

For some years, the EU has been contemplating removing the annual “clocks forward, clocks back” system. This is because a survey of 4.5 million people in 2018 revealed that over 80% wanted to scrap the time changes, preferring to stay on “summer” time, but as yet, nothing concrete has happened.

With spring just a fortnight away, it is the perfect time to explore parts of Spain which offer beautiful scenery, almond blossom in abundance and which are places to consider if you are planning to live in this fascinating country.

In Britain, crocuses are probably the first sign of warmer weather to come, but in Spain, it is the soft pink almond blossom which covers much of the country at this time of the year. A truly wonderful sight, especially when there are several trees together and they form a dense pink cloud. 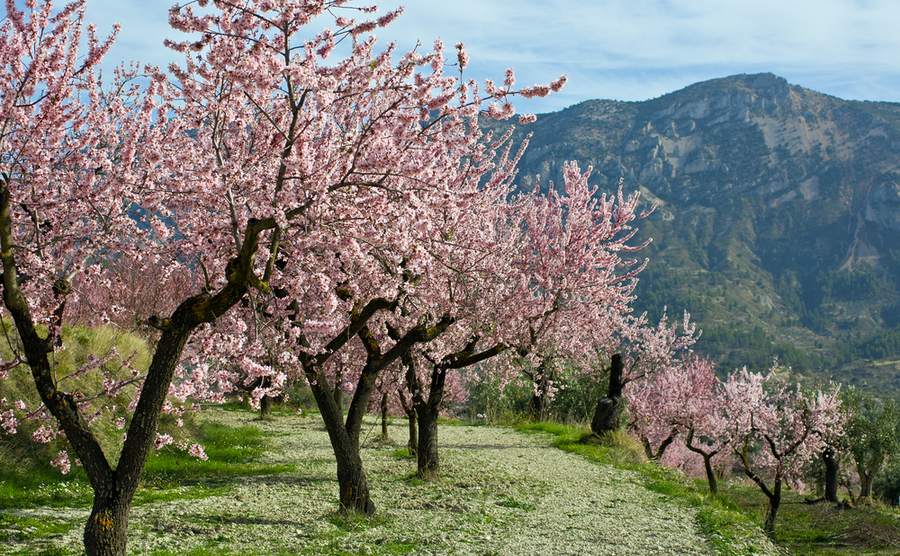 Soft pink almond blossom covers much of the country in spring

Almond trees are, of course, cultivated for their fruit or, rather, nuts, which are a very important part of Spanish cuisine and culture, but the blossoming in late February/early March signals that the countryside is awakening from its winter slumber and we can expect warm spring days ahead.

So, where can you find these wonderful trees?

The island of Mallorca

A very popular place to buy property in Spain is the largest of the Balearic Islands, Mallorca, with its stunning coasts and pretty interior overlooked by the Tramuntana mountain range. It is here that the almond tree thrives with a magnificent display of blossom.

The interior of Mallorca is a haven away from the busy coastal town and is home to many famous people seeking seclusion and privacy. Property is therefore on the expensive side, but since both the coast and the capital, Palma, are never far away, it’s a good place in which to settle down.

Find homes in Mallorca on our portal

The interior of Alicante province

If you take the road west and inland from Alicante city, you will arrive in a lovely area where almond trees abound. It is also one of the most visited areas in the province due to the natural beauty and interesting towns. Rocky peaks guard the large green valleys that house the almond trees, olive trees and orange trees. 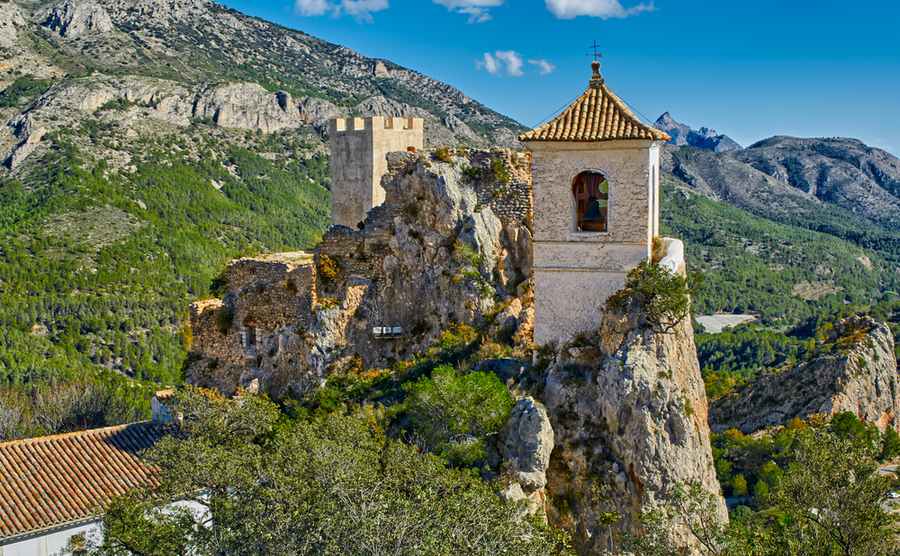 Castle in the pretty and popular town of Guadalest.

There are many small villages where you can find rural properties of different styles and prices. Some, particularly in and around the pretty and popular town of Guadalest, are quite pricey but others not far away are very reasonable. The area is half an hour’s drive from Benidorm, so the sea and the busy coast aren’t far away.

The interior of Almeria province

About 45 minutes north of Almeria city are valleys of pink blossom. There are also delightful villages which offer a true Spanish lifestyle.

Some of the towns and villages have Moorish influences and have a long history of habitation. The area is known for its many and varied countryside walks, and the local cuisine is special with dishes such as gazpacho dulce which is a gazpacho sweetened with honey.

Property in this area is comparatively inexpensive and ranges from village homes to large estates. With Almeria airport not too far away, it is definitely an area worth exploring for tranquility and lower-priced property.

For a great insight into life in this area, read Chris Stewart’s book “The Almond Blossom Appreciation Society”, which tells the story of his move to a remote mountain farm in Las Alpujarras.

The interior of Málaga province

Andalusia is one of the most popular areas for British people looking for beaches and endless sunshine. If you venture inland though, there is another world of glorious scenery interrupted by little villages and valleys of almond and olive trees.

Just 25 minutes from Málaga city and airport, and about the same distance from Antequera, is the white town of Almogia. The economy is based on almond and olive groves, and it is an excellent place to visit for almond blossom in the spring. 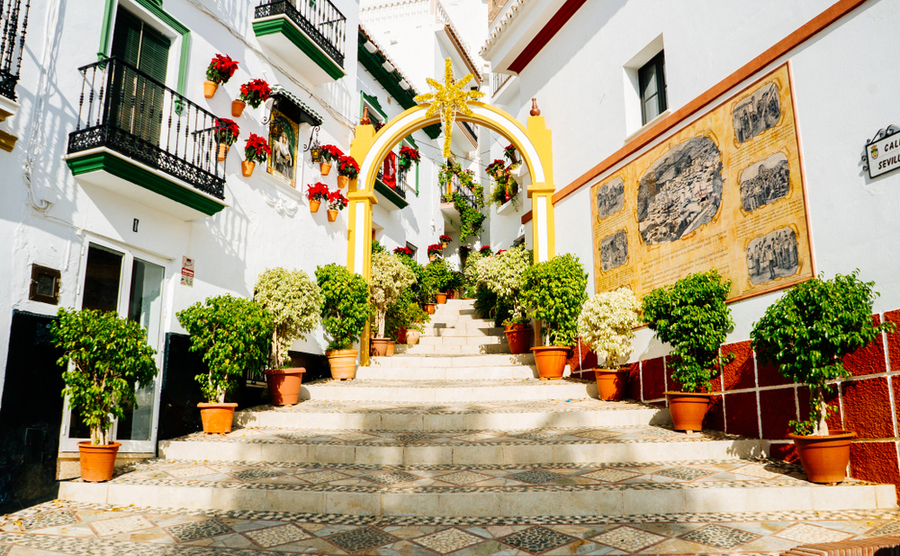 The whitewashed town of Almogia is just 25 minutes from Málaga city and airport.

Located in the Guadalhorce Valley, the historic town boasts archeological remains and the ruins of Almogia castle which overlooks the terracotta tile roofs.

Property here is generally reasonably priced, and you can find both apartments and country houses. For anyone who wants to be close to the sea but also a peaceful way of life, Almogia and the district is an area of interest.

Almond trees are not found only in rural areas.

Madrid is a city full of parks with Retiro Park being the best known. However, head out towards the football stadium of Atletico Madrid and you will find a quiet and relatively unknown park called Quinta de los Molinos. It is here that you will find a wonderful display of almond blossom. It is also a pleasant park with partly landscaped gardens and partly agricultural zones.

There are some very smart apartments close to this park which are in the upper price range, but you can also find some which need renovation for less. Close to the Suanzes metro station and on several bus routes, this would be a good choice if you are moving to Madrid for work and having such a lovely park a few steps away is an added bonus.

Find your dream home in Madrid