The appeal of Cádiz

Our expat writer, Sally Veall, wrote on her exploration of Cádiz. Here is your guide to what the area has to offer and why you might just want to purchase a property there.

Undoubtedly, one of the best things about living in Spain is discovering the wide variety of landscapes, architecture and local cultures. Usually a train ride away, you can be in a different world from your home region and taste another regional cuisine which may be very different from the one you are used to.

So it was, I left my home in Catalonia in the northeast and headed to the far south of Spain, to the city of Cádiz in Andalusia. Two completely different worlds, both offering a great lifestyle but in distinctive ways. 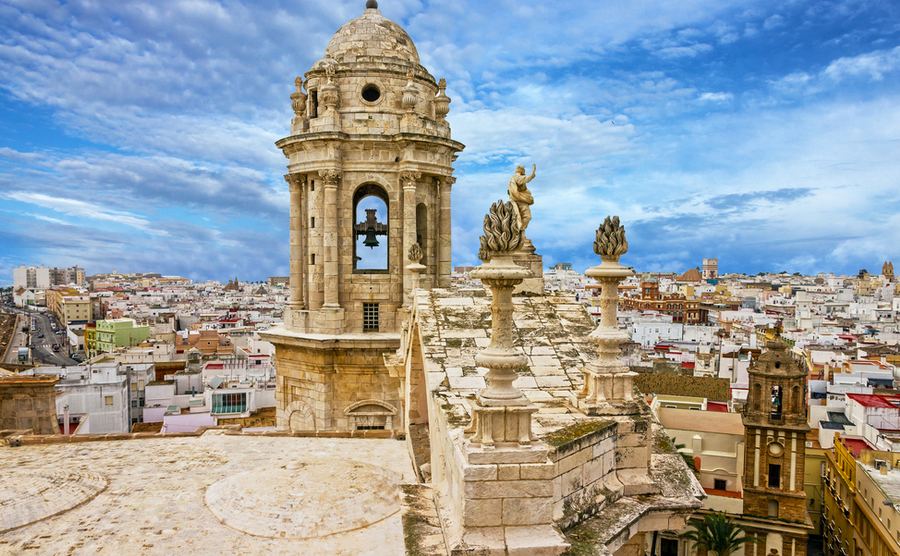 The beauty of Cadiz.

Cádiz is a major seaport which became wealthy due to the trade with the Americas in the 18th Century. Before that, the Phonecians were there, and it is considered to be the oldest living city in Europe. The Romans have left their mark as have the Moors who occupied Cádiz from 711 to 1262. It is a fascinating place with diverse cultures but is actually quite a small city, easy negotiable on foot. In fact, there are two cities, the old and the new, which could not be more different from one another. The old city with narrow streets, gracious squares, gardens and teeming with restaurants and bars. The new city, a bus ride away is full of apartment blocks and modern hotels all serving the long beaches of fine sand.

The surrounding landscape is not particularly attractive or interesting, until, that is, you head inland to the white villages perched on top of hillsides. Vejer, about an hour and 30 minutes by bus is definitely worth a visit.

The nearest airport is in Jerez la Frontera from where you can take a train directly to Cádiz, a journey of roughly 40 minutes. The station in Cádiz is a 10-minute walk to the main square which houses the imposing Town Hall. The trains go from Cádiz directly to Jerez de la Frontera, Seville, Jaen and Málaga (one change).

Buses are the general mode of transport around the city and further afield. There is a catamaran which goes regularly to Puerto de Santa Mária on the other side of the bay, though you might be unlucky and have to take a bus when the Levant wind is blowing as it is impossible to sail there.

Taxis are numerous and inexpensive (certainly compared to Catalonia!)

Shank’s pony is the go-to method of getting around. 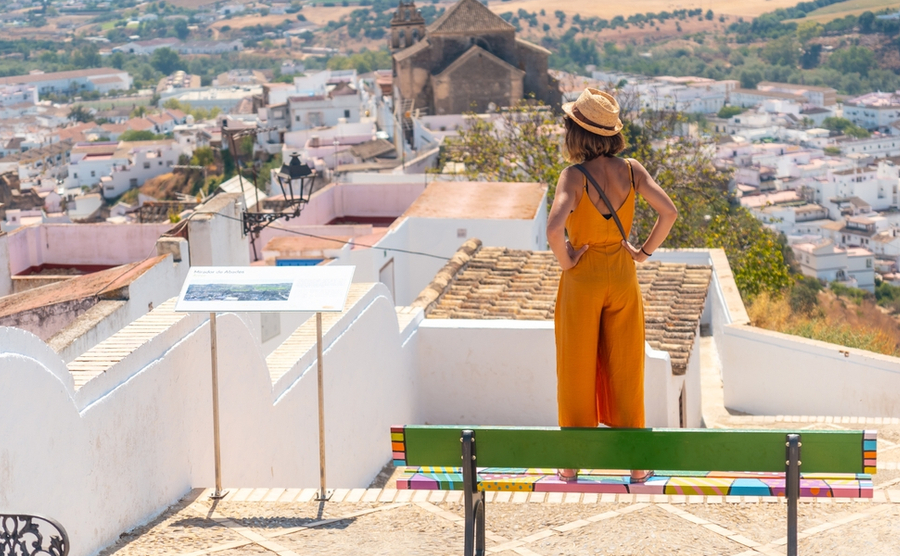 The old city of Cádiz is eminently liveable if you want to be in the centre of things and are happy to live in an apartment. Some of the lovely old buildings have been completely restored and offer first-class accommodation with modern lifts. I stayed in one such, just a stone’s throw from the main square and it was a joy to enter the ground floor each day with its internal courtyard, galleried landings and lift! The apartment itself was charming but modern whilst retaining some of the original features.

Surrounded by sea, Cádiz offers every type of water sport, long beaches, a marina and by the way, the city’s emblem is a Tuna fish which gives one an idea of its cuisine. The daily market is a wonder in itself. I know the Boquería market in Barcelona very well, these days more of a tourist attraction than a local market and the equivalent in Cádiz is just as amazing but is there for the locals. The fish section is enormous with numerous small stalls, each selling its speciality. Whilst not cheap, most fish there is affordable, the most expensive being certain types of tuna. The meat area is well represented as are vegetables and fruit. Inside and outside is a myriad of bars and restaurants which get full every day around lunchtime. Stop for a sherry at the little corner bar before heading for lunch.

Nothing is too far away. The pretty botanical garden, Park Genovese, which lies between the old town and the sea, offers a peaceful and very green respite from the bustle of daily life. There are many trees from all over the world, a small lake with a waterfall and a children’s playground.

The modern part of the city is residential and is home to some smart modern hotels bordering the beaches. It is functional and there are some very elegant apartments in the area. There are shops and restaurants for both locals and tourists and you have every amenity you might need there. 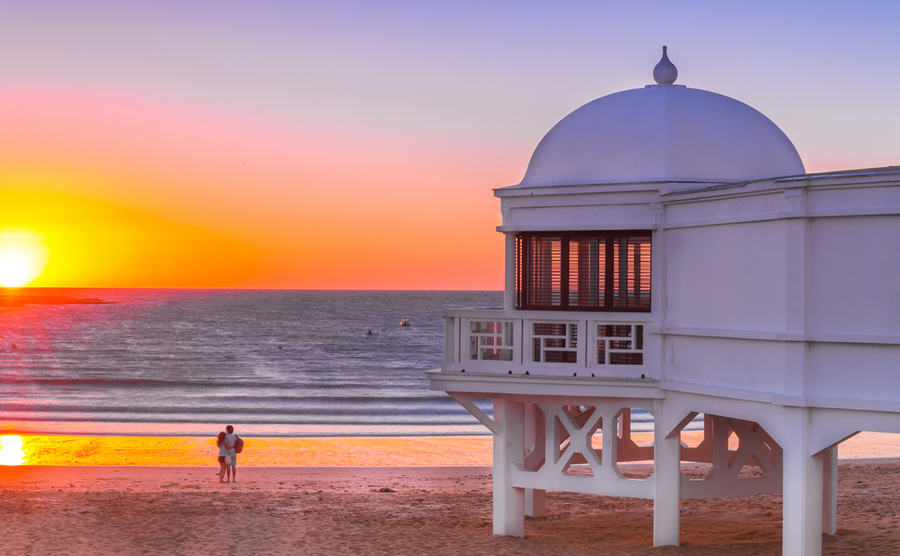 Houses and villas are located outside the city but not far away. Apartments in the old town start at €87,000 but expect to pay around €200,000 for a 3 bedroomed apartment in a residential area. From €300,000 you can buy a house with a sea view but some properties are priced at over 2 million Euro in the historic centre.

Having the Atlantic ocean all around the city, it can suffer from strong winds but the climate is warm and the average temperature in August is 25º though it can get quite a lot hotter. January is the coldest month with an average temperature of 15º, still considerably warmer than many other parts of Spain. 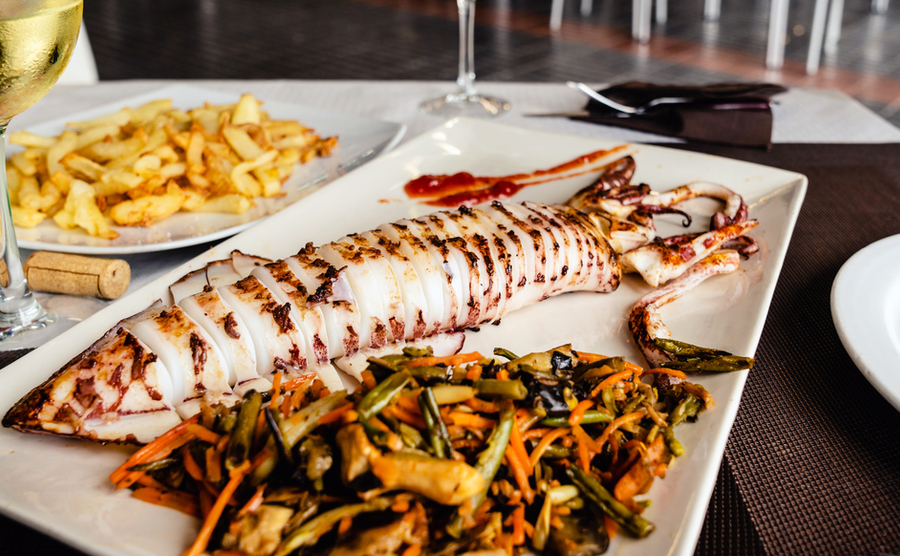 Cadiz is fabulous for seafood lovers.

Of course, Tuna, other fish and every type of seafood are kings in Cádiz. I have to say, I haven’t enjoyed food as much as I did in Cádiz for many years. Even the smallest local bar on the corner of a back street served wonderful tapas, beautifully presented and quite delicious. The restaurants nestled around the pretty squares offer innovative dishes which are a delight to the eye. The average price of a meal for 2 with a bottle of good local wine is €30 to €40.

If you prefer meat, there are many restaurants serving quality meats, in particular, pork, ham and steak. Argentinian restaurants are best for the latter. Japanese and Italian food is available too.

There are 3 international schools near Cádiz of which 2 are English schools. There are none in the city itself.

The local people are extremely friendly and helpful. Many speak good English and if they don’t, will go to great lengths to try and assist you. It would be worth learning basic Spanish though if you plan to live there. Several schools for adults offer classes in Spanish. 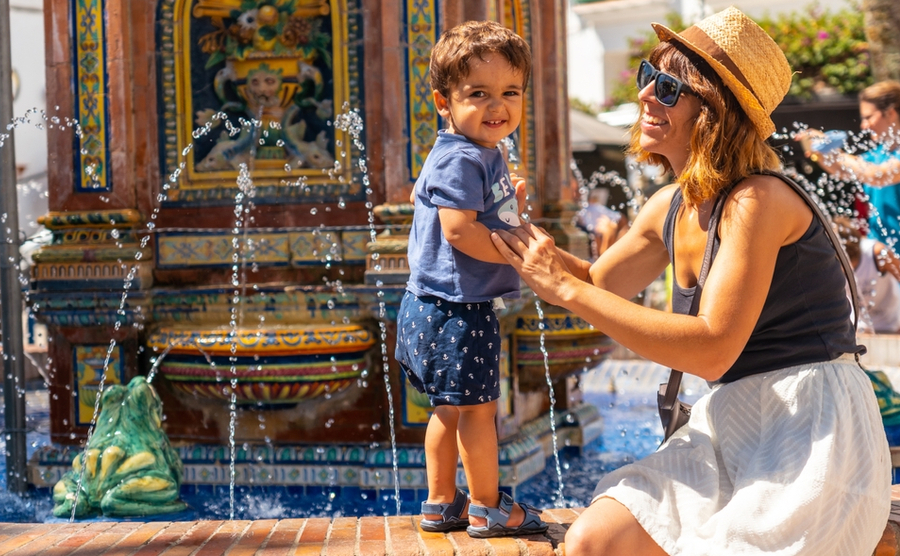 Can you imagine yourself living there?

There are 7 hospitals and clinics in the city. Primary healthcare is available for residents. There are others of a high standard in the dormitory towns surrounding the city. (Chiclana La Frontera for example, which is also home to large shopping centres and DIY outlets and is just 18 km away).

The lifestyle is very relaxed. People are friendly, and the climate is comfortable most of the time. People live outside, the cafes and bars are always busy and there are literally hundreds of them, the beaches are clean and safe and the cuisine is wonderful. It is a city worth considering if you plan to move to Spain. Spend a few days there and you will want to return, possibly forever.