Spanish food: a festival of flavours

Spain has wonderful beaches, architecture, climate and…food. Spanish food is approached in a distinctly different way from British food, with later eating times and more of an emphasis on home cooking, socialising and quality ingredients. Their love of food comes into its own at Christmas, when the main meal is shared on Christmas Eve.

With lockdowns and restrictions, homemade food has once again become important in the UK but here in Spain, homemade food has never gone away. It’s true that you can now get a better range of ready-made meals in Spanish supermarkets but the choice is tiny compared to what is available in the UK.

A Spanish Mum or Grandma prefers to cook good wholesome food from scratch, generally using seasonal produce. It’s a “treat” to go to McDonalds or Burger King but the Spanish have their own version of fast food – namely tapas! 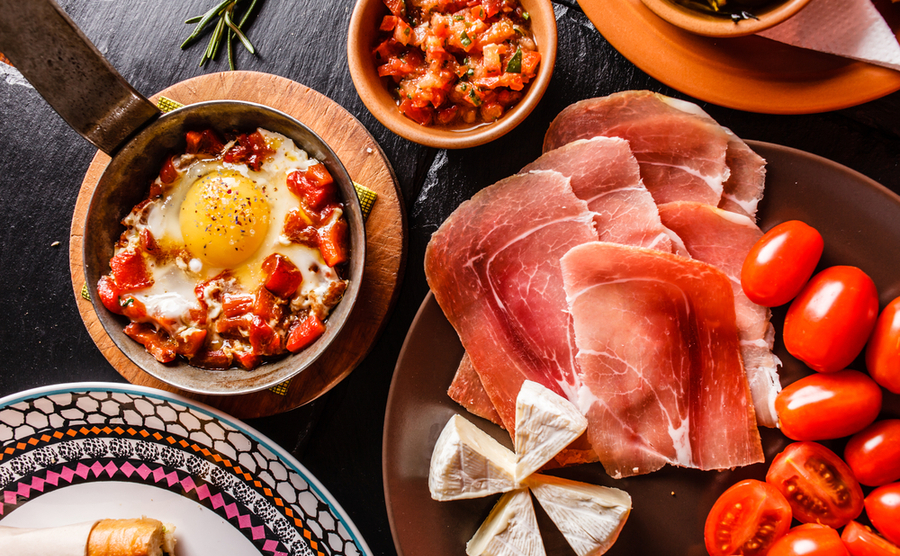 Here in Spain, homemade food has never gone away.

Why do the Spanish eat so late?

Before we delve into the delights of tapas and other meals, it is important to discuss why we eat so late in Spain compared to other European countries, especially those in the north.

General Franco, who was Spain’s leader from 1939 to 1975, decided to match Spain’s time to Hitler’s Germany, so moved the clocks forward an hour, to one hour later than Greenwich Mean Time (GMT). This put Spain into the wrong time zone for its geographical position. Portugal, which shares the Iberian Peninsula with Spain, remained at GMT and so has the same time as Britain, as does Morocco.

As a result, everything happens at least one hour later in Spain with shops opening at 10am instead of 9 and closing late too. Restaurants work in tandem with these hours, allowing workers to have lunch between 1.30 and 4pm and dinner from 8pm to 11.30. Because the working day starts late, it follows that mealtimes are late. Foreigners find it hard to adapt to these times. So, restaurants in tourist areas will often open earlier to accommodate people from Britain, France, Germany, The Netherlands, Scandinavia and other EU countries, all of whom eat earlier.

To start the day, most people just have a coffee and toast, churro (a long doughnut) or pan con tomate (bread and tomato). They then have a “second breakfast” between 10 and 11.30 am, which will be something like a croissant or sandwich and more coffee. Lunch will be between 1.30 and 4pm – generally around 2 to 2.30. After work, Spanish people will go to a tapas bar with colleagues or friends for a couple of drinks, mainly wine or beer. They will have a few snacks there before heading home for dinner at 10pm or later.

A true Spanish tapas bar will only have a few tables with uncomfortable chairs, as the majority of patrons will eat and drink standing up. It’s noisy, often chaotic and great fun.

So now let’s go to a tapas bar…

Many such eateries have opened in the UK and I have sampled a few. Whilst the food is often genuine and tasty, they lack atmosphere. This is because they follow British culture, not Spanish. A true Spanish tapas bar will only have a few tables with uncomfortable chairs, as the majority of patrons will eat and drink standing up. It’s noisy, often chaotic and great fun. It’s best to go a little early to grab a spot by the bar or at one of the counters where you might find a barstool to perch on.

What exactly is tapas? There is a legend about a Spanish king who was visiting the lovely city of Cádiz following an illness and ordered a glass of sherry (some say wine). The innkeeper brought it to him with a slice of ham covering the glass. This was to keep sand out of the glass as it can be very windy in Cádiz. The king drank and ate the ham and proceeded to order another glass “con la tapa” – with the cover.

There are many other stories about the origin of this type of food but whether true or not, tapas is a wonderful invention. It usually includes some cured meat, morsels of cooked fish such as anchovies and sardines, eggs, tortilla (Spain’s famous omelette, made with potatoes and with or without onions), or cheese, such as manchego or cabrales. 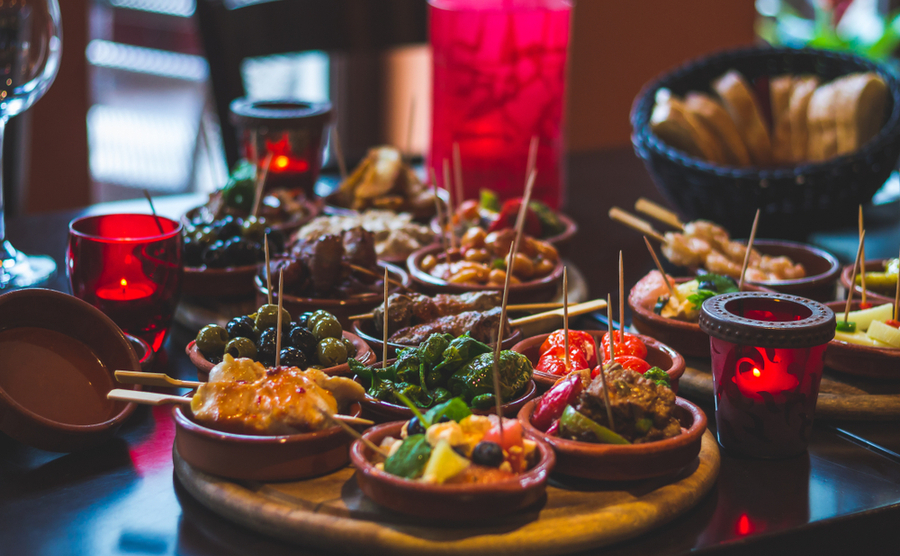 How do you find a good tapas bar? Go where the locals go.

How do you find a good tapas bar? Go where the locals go. The best bars will already be busy when you get there. Most larger towns and cities have a designated tapas area. One such is El Tubo in Zaragoza, where each tapas bar has its own speciality. You would need a month to try them all out. It’s fun to go back and try new ones.

The people in the Basque Country have their own version, “pinchos”, which are made with food on sticks. At the risk of offending some, there you will probably find the best tapas in Spain. Having said that, all over Spain tapas is delicious with lots of regional variations. In the more sophisticated bars with large tables and chairs, there is nothing better than a meal with friends sharing several tapas dishes, both cold and hot, washed down with a good local wine or a beer.

When you do decide to buy in Spain, Smart Currency Exchange is the specialist in exchanging your pounds into euros. They have two offices in Spain too, in the Costa Blanca and Costa del Sol. Read Smart’s Property Buyer’s Guide to Currency here.

What’s on offer for vegetarians in Spain?

Until very recently, vegetarians have had a hard time in Spain despite the abundance of wonderful fresh fruit and vegetables in the markets and supermarkets. It is because Spanish food generally revolves around fish and meat, especially pork and ham. Vegetables are eaten at home but often not in restaurants. However, about 6 years’ ago things began to change with the huge influx of foreign visitors, around 63 million a year.

The demand for vegetarian dishes became overwhelming and finally the catering businesses started to add at least one vegetarian option on the menu. This hasn’t happened everywhere yet, but in the areas where tourists are welcomed, it shouldn’t be a problem. Almost everywhere you will find roasted vegetables (escalivada in Catalonia), salads, omelettes and stir fry. On a trip to Madrid with a cousin, I discovered the most fantastic vegetarian restaurant opposite the famous and beautiful Retiro Park. We had a delicious meal of delicate vegetarian dishes and I thought it was such a pity that most Spanish towns don’t cater in this way. 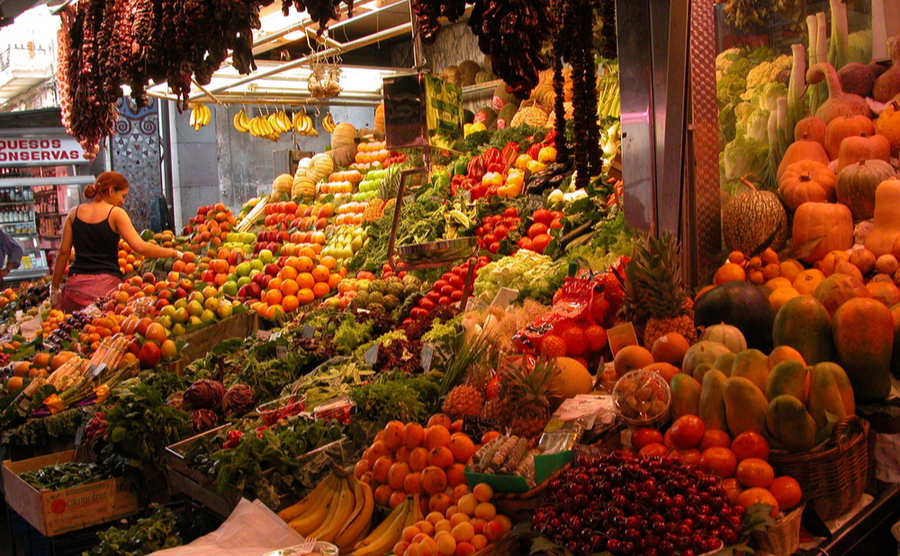 What do the Spanish eat at Christmas?

The Spanish celebrate Christmas Eve more than Christmas Day. The meals differ from region to region. In Catalonia, sopa de galets is popular. It is a broth with shell-shaped pasta often stuffed with meat. Canelons, pasta with filling similar to Italian cannelloni usually follows the soup.

The main delicacy all over Spain is seafood. Every kind is on offer from prawns to mussels, lobster to clams. It is often served as a fish stew but also served fresh. Let’s not forget ham – jamón. Christmas is when everyone buys the best ham they can afford and there are hundreds of varieties to choose from. Just walk down any street in Madrid and you will see shops full of whole hams hanging from the ceiling! All types of salamis and cured meat are part of the meal too. In areas around Madrid and nearby towns, suckling pig and roast lamb are typically served on Christmas Eve. The leftovers are used up on Christmas Day.

Christmas is when everyone buys the best ham they can afford and there are hundreds of varieties to choose from.

The Spanish generally have a sweet tooth and Christmas is the time to indulge. Polvorones are delicious light, powdery biscuits wrapped in paper, similar to mantecados. Both are found at Christmas time in every food shop, as is the famous turrón, which is made of a base of nougat and almonds. There are numerous varieties – some with egg, some with chocolate but all are very sweet and extremely popular in Spain.

And of course, no Christmas celebration is complete without cava, a sparkling wine from Catalonia. 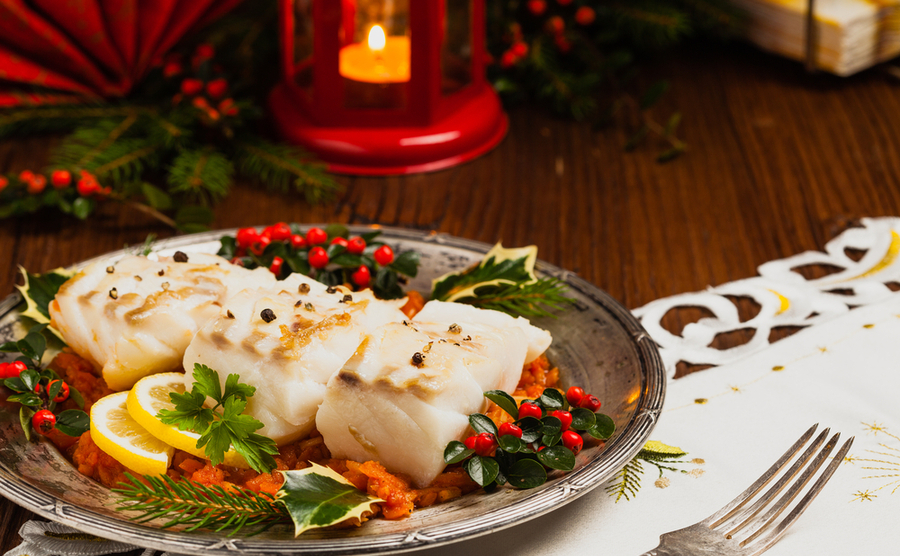 Most Catholic countries celebrate the arrival of the three Kings on January 6th. Apart from parades, sweets being thrown to children and the opening of gifts, there is a special cake to eat. In Spain, it is called Roscón de Reyes and has similar names in France, Italy and Portugal. It is like a brioche or sweet bread often filled with whipped cream and sprinkled with candied fruit on top. There is a little figurine hidden inside the cake and the person who finds it is “King for the Day.”