Spain’s new austerity budget – where will it hit you?

The new Spanish government has finally managed to announce a budget and it’s good news if you are on the minimum wage or read books online while drinking wine. It’s bad news for almost everyone else though

After 10 months as leader of a caretaker government in Spain, Mariano Rajoy was finally invested as President last month and his finance minister, Cristobal Montoro, was able to present a budget to parliament. The government is in the minority, however, so they needed the agreement of the largest opposition party, the more left-wing PSOE, who insisted on an increase in the minimum wage in exchange for their support.

The Spanish minimum wage is €764 per month at present but this will rise by 8 percent to €825 next year. That is still barely €5 per hour for a 40 hour week and little more than half the British rate of £7.50 set for 2017, but bear in mind that most prices in Spain are at least half those in Britain too! PSOE claimed that this was their demand if they were going to support the budget and that it is the biggest increase in the minimum wage in 30 years.

Spain’s unions have said that it is still insufficient, given that more than 5.5 million Spanish families survive on the minimum wage. The unions announced two days of protest to urge the government to stop its policy of austerity and to “respond to social needs.” 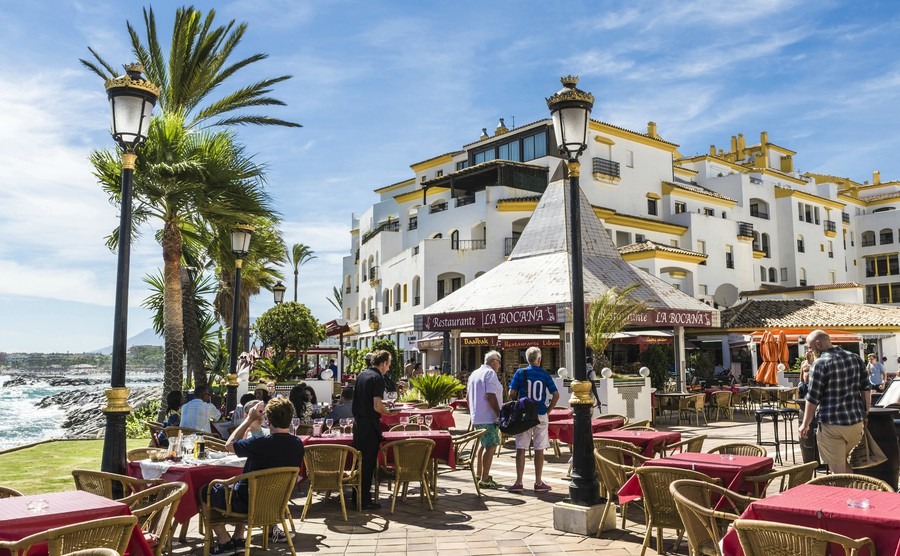 Prices will rise but the staff should earn more at this bar in Puerto Banus (J2R / Shutterstock.com)

The main part of the budget was measures to reduce the country’s deficit, under pressure from the EU. Government spending should drop 4 percent in real terms and this will be accompanied by tax increases. Some of these will hit property owners and expats, with rises in wealth, property and drinks tax. The government aims to bring in €150 million by increasing the tax on alcohol (but not on beer or wine) and tobacco products, plus a new tax on sugary drinks which should bring in a further €200 million to the treasury.

There will be an increase in wealth tax and the country’s autonomous regions will be able to set a tax on large incomes. Assessment of the property tax, IBI, is to be updated which will result in an increase in the majority of cases. New environmental taxes are to be introduced over the next year in compliance with Brussels’ recommendations.

The biggest revenue raiser is €4.6 billion that the government hopes to bring in through an increase in corporation tax. They are not raising the base level of 25 percent but are going to limit tax rebates in line with the latest rules set by the EU.

Mr. Montoro also announced a concerted effort to reduce fraud, tax evasion and money laundering. There will be tighter controls on IVA (VAT) and Hacienda, the Spanish tax authority, will be looking more closely at tax payment deferrals. There is to be a new system for payment of VAT which will require companies to report directly with the tax agency via a computerised connection. Currently cash payments are set at a maximum of €2,500 but this going to be reduced to €1,000.

For those of us spending our time in the Spanish sunshine reading books and magazines online, IVA (VAT) on digital books, newspapers and magazines will be brought into line with printed books and reduced from 21 percent to 4 percent as the EU says there is no distinction between a book made of paper or a book online. A victory for common sense.