Rules of the road in Spain

The Spanish Driving Authority has brought in new rules and restrictions to make Spain’s roads as safe as possible. With summer in full swing, we remind you of the main ways to keep yourself and your family safe on the Spanish roads.

At this time of the year, when we venture down to Spain for a viewing trip, it is useful to be reminded of some of the rules and regulations on the road. As in Britain, Spain has introduced speed cameras for road safety purposes – although they’re pretty profitable for the Spanish Driving Authority (DGT) too, so stick to the displayed speed limits to avoid heavy fines.

Some of the rules may seem a little draconian, but they are working. Spain now has one of the lowest rates of road death in the world, at around 35 per million inhabitants (the UK has around 30, while in much of Eastern Europe the rate is above 90). Moreover, Spain has one of the fastest reductions in road death, falling by nearly 50% between 2008 and 2014. The even better news for foreign residents is that the safest Spanish roads are along the coasts.

High visibility jackets MUST be worn by the driver and all passengers in the case of an accident or breakdown.

On the way to Spain

Unless you are taking a ferry to Bilbao or Santander, you will likely have to travel through France to get to Spain. If you will be driving through Paris, Lyon or Grenoble, you are required to display an emissions sticker on the windscreen as part of the Crit’Air scheme to reduce pollution. You can buy these stickers online for €4.80, which includes postage to Britain. If you are caught without one of these stickers, there is an on-the-spot fine of €68!

A new EU law might catch out many British drivers in France and other EU countries. The EU directive covers speeding and seven further motoring offences, including failing to stop at a red light, not wearing a seatbelt and driving while using a mobile phone. For the first time British drivers can be traced via the DVLA and fined. You could face fines of up to €750 for driving more than 31 mph above the speed limit. You have been warned!

Abide by the law when driving through Spain’s stunning landscape

Let’s begin with some lesser known violations of the laws that could incur a fine or worse in Spain:

● No Insurance: if you are caught without insurance you will be fined and your car is likely to be impounded by the police.

● Throwing items out of a car window: there is an €80 in Spain for anyone caught littering from a car. If you throw out a cigarette butt the fine rises to €200 and you will receive four penalty points on your licence.

● Powdering your nose, eating or drinking are looked upon as distractions while behind the wheel, so if caught expect a fine of up to €100.

● High visibility jackets MUST be worn by the driver and all passengers in the case of an accident or breakdown. These need to be put on before leaving the vehicle. If you are are the driver and you are not wearing the jacket before you get out, the fine is €200 and three penalty points. You could be fined another €200 for not displaying the mandatory warning triangles – every car should have two of these.

● Grubby/manipulated number plates: you need to keep your number plates clean and legible, and you must not put any stickers on them. The police have been known to fine drivers even when their vehicle is parked.

● Children must always be seated in the rear of a car. 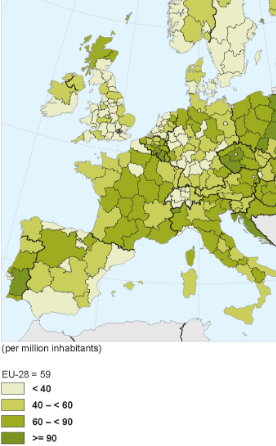 Currently the speed limits in Spain are 120kph on motorways, 90kph on secondary roads and 50kmph in built up areas. Spain has a system of autovias, which are not motorways but are often dual carriageways, where the speed limits vary along the route from 80kph to 110kph. Keep a look out for limit changes as you drive, there are usually speed cameras posted shortly after the new speed sign.

Find out how to make the most of your road trip by downloading our free guide to planning a viewing trip.

Many towns and villages are lowering the 50kph limit to 40 or even 30kph, while some stretches of motorway now allow driving at 130kph. Be aware though, that you can be fined for going over any speed limit by as little as 1kph. Remember to be diligent, as there are many mobile radar traps as well as fixed speed cameras.

Currently the speed limits in Spain are 120kph on motorways, 90kph on secondary roads and 50kph in built up areas.

The laws in Spain are very strict and the limit for alcohol in the blood is lower than in the UK, at just 0.5 milligrams or one small beer. It just isn’t worth getting caught at one of the many Guardia Civil or Mossos (Catalonia) roadblocks. It’s better to take a taxi back after just one alcoholic drink, rather than to be slapped with a severe fine or even imprisonment.

The Spanish authorities are determined to keep roads as safe as possible for everyone and are being highly successful. Generally these days, Spanish drivers observe the rules, but of course there those who are willing to flaunt the law. The main road networks in Spain have pretty good surfaces, but go off the beaten track and you will find tracks, potholes and stones. Most of the rules and regulations are common sense and the majority of British people have no more problem driving in Spain than they do in the UK – except that you drive on the other side of the road of course!