Murcia, in the south-east of Spain, has seen a surge in tourism in 2016. That’s hardly surprising, given its natural charms and huge investment in upmarket resorts. When it comes to property, however, you might be surprised at how affordable property is, and how easy to reach even in the depths of winter.

Murcia’s popularity with foreign visitors and second homeowners has risen steeply this year. It welcomed 30 percent more overseas tourists during the first eight months of 2016 than during the same period last year.

The region, which is home to the famous Mar Menor lagoon and the upmarket La Manga resort, received 56 percent more foreign tourists this August compared to last, nearly half of whom were British. Many arrived by easyJet and Ryanair flights, with the latter airline recently announcing additions to its winter flights to Murcia’s San Javier airport. If and when the new airport at Corvera opens, the region can expect a boost from even more international flights.

“The Polaris World golf resorts helped to put Murcia on the map, with some pretty inland areas around Lorca and Totana,” says Laura Richards, Spain specialist at PropertyGuides.com. “But the region and its ‘warm coast’, the Costa Cálida, is a real Spanish highlight in and around the Mar Menor and Puerto de Mazarrón too. Not forgetting, of course, that it’s home to arguably Spain’s most famous golf and leisure resort, La Manga Club.”

SEARCH for your property in Murcia 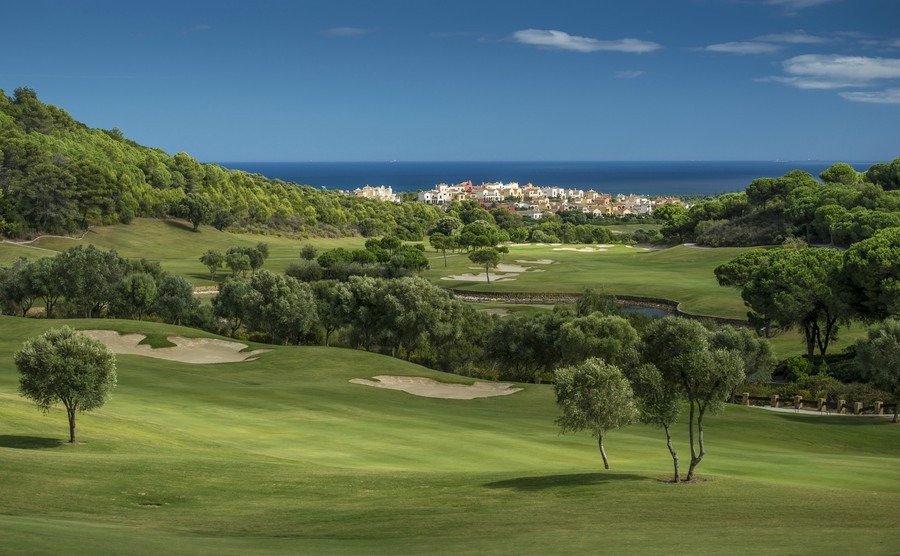 A fairway with a Mediterranean view: does life get any better?

Golf remains a key attraction for property-buyers in Murcia, so where do you start your property search there? “Polaris World was a victim of the financial crash in 2008, and its golf courses and the vast majority of its assets ended up in the hands of the banks,” added Laura Richards. “However, they are popular again and continue to be managed well, offering an affordable way to own a property on a well-equipped gated resort with direct access to a Jack Nicklaus golf course.”

Mar Menor, La Torre and Hacienda Riquelme, each located between the lagoon called the Mar Menor (‘little sea’) and the city of Murcia, are the three most popular Polaris World developments, with apartments on some starting at around €70,000.

Other gated golf-resort options in Murcia include Hacienda del Alamo near Fuente Alamo, where more bank-owned property is available, as well as Roda Golf, located next to the Mar Menor and resort of Los Alcázares.

On a much larger scale is Camposol near Mazarrón, more an urbanisation with shopping and commercial outlets suited to year-round living than a resort. With an 18-hole golf course in one corner and a favourite with Brits, properties there are now estimated to number around 7,000, and range from two-bedroom terraced homes for less than €50,000 to two-bedroom detached villas with a pool for around €100,000 and three-bedroom villas for under €200,000.

La Manga’s 2,300 homes are spread across small communities for a welcoming and village-like atmosphere

Murcia’s jewel in the crown is the 1,400-acre La Manga Club, nestled in a valley near the southern end of the Mar Menor. It has around 2,300 homes, including apartments townhouses and villas on large plots, but spread across small communities for a welcoming and village-like atmosphere. The resort’s five-star hotel, international restaurants and commercial outlets are complemented by three championship golf courses, 28 tennis courts, eight FIFA-approved football pitches, a 2,000-square-metre Spa and Fitness Centre and private section of beach.

La Manga is a particular favourite of retired British sports stars, so if you fancy buying Kenny Dalglish a beer at the 19th, this is the place to start your search.

Come back next week to read about your options for buying a home on the beach in Murcia.