Whenever you think of Spain you think about sun and sand, music and wine and lots of festivals. Some of these are really major events which attract huge crowds from Spain and abroad such as The Running of the Bulls in Pamplona or Las Fallas in Valencia. Nevertheless there are hundreds of wonderful small local Spanish festivals to enjoy and to participate in.

In fact, one of the best ways to integrate into Spanish life is to volunteer to help out at a local festival near you. You won’t have to be front of stage but you can help to design, paint and make scenery or other things needed. If you are good at sewing, why not offer to help with costumes? If photography is your thing, you could suggest being the official photographer for the event. Often good mechanics are needed for floats and of course there are always people who just hang things, tie things and generally help out.

One of the best ways to integrate into Spanish life is to volunteer to help out at a local festival near you.

In this way you will get to know your local community, perhaps improve your Spanish and feel part of the country you have adopted as your home. Let’s look at some great local Spanish festivals:

On the weekend before 01 May the town centre becomes a haven of flowers and nature inspired streets. Trees are decorated, roads become floral walkways and people open private patios for all to enjoy once a year. Public gardens are venues for every type of music from flute solos to reggae, jazz to cello concerts. There is something for everyone, children included, a artisanal market, cocktails in certain bars and a special festival menu in the town’s restaurants.

Also in what remains of an old cork factory there is the main stage and an area filled with caravans serving drinks and tapas, crèpes and artisanal beers. Here people socialise and pass the time together, relaxing as only the Spanish can, listening to a variety of bands playing.

As with other small Spanish festivals, Flors i Violas is good for the town’s shops and bars, bringing in much needed revenue in an area where “the season” is relatively short and local businesses need increased custom outside the summer months.

This is one of Spain’s crazier small festivals and being in La Rioja it is all to to do with wine. It takes place every 29th June which is also the day of Saint Peter (San Pedro) and the day starts at 9.00 am when there is an amazing procession with people of all ages carrying jugs, bowls and bottles full of red wine. 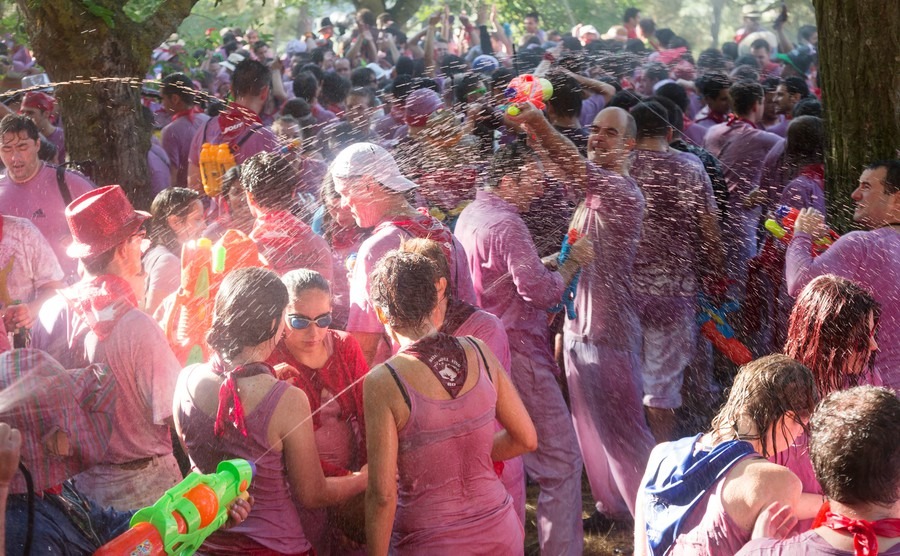 The procession is led by the major, who is on horseback, to the Hermitage of San Felices de Bilibio where a mass is held. Nevertheless, the main event which begins shortly after is not at all serious as everyone begins to throw wine at each other with all the participants getting soaked. It’s mad and great fun – but you shouldn’t wear your best clothes!

At midday everyone returns to the main town square to celebrate more after which there is a bullfight but not an ordinary one – the “bulls” are in fact heifers and the matadors are youngsters. No animal is killed either.

The Cruces de Mayo festival actually happens in small towns all over Andalucia and you don’t have to be religious to enjoy this local Spanish festival as basically it is a competition for the best decorated cross. According to tradition, Saint Constantine’s mother started the festival which is held on the closest Sunday to May 1st.

The town hall awards the prizes on the basis of the actual decoration of the cross, the type of flowers used, the use of existing walls or trees and the lighting. Each cross stands at a metre high and will be decorated in red or white or sometimes green or yellow. Flowers of other colours are used as a backdrop on a wall, for example, or as further decoration at the base of the cross.

Despite its religious origin, this is a very Spanish festival with each district erecting stalls offering drinks and tapas at bargain prices. In addition it wouldn’t be Spain without music and there are sevillanas, flamenco and rock on offer.

This is a comparatively recent festival which began in 1997 and celebrates Andalusian culture with its two main roots – Christian and the Moors who conquered Spain and remained in the country for 800 years. The festival celebrates the fact that the two cultures lived side by side and together created the Andalusian culture we enjoy today. It is held on the second weekend in September.

In this local Spanish festival you are transported to medieval times with a medieval market (souk) and artisans fashioning pottery, basketware and other crafts. Additionally, there are theatre shows, and storytelling with parades and several exhibitions. Of course there is music too – flamenco – and the high point of the festival is at night when the town shimmers in the light of an amazing 25,000 candles and torches. Not to be missed.

A truly strange local Spanish festival dating from 1620 and held during Corpus Christi, it involves men dressed as the devil wearing yellow and red suits jumping over babies which have been born during the previous 12 months. The babies are laid onto mattresses in the streets and the so-called devils carry whips and huge castanets as they leap over them.

The baby jumping is the culmination of a week long festival and its origins aren’t really known though it is believed that it is do to with cleansing the babies of original sin. It must be rather nerve wracking for the parents watching this spectacle but to date there is no record of any baby being trodden on!

The very pretty hilltop town of Begur is turned into Havana for a weekend at the beginning of September as it celebrates the connection between Catalonia and Cuba resulting from the large number of Catalans who went to the Caribbean to seek work and fortune towards the end of the 19th century.

The atmosphere is very Cuban with stalls selling all sorts of traditional crafts, mojitos and tapas and there is plenty of music to enjoy as well, featuring South American and Caribbean musicians. There is also traditional Catalan music, in particular havaneras, sea shanties brought back from Cuba by returning Catalans and which contain Cuban rhythms.

Begur has some wonderful colonial style buildings constructed by the then wealthy Catalans on their return home and who were trying to recreate Havana in Catalonia.

The small town of Trujillo is host to an annual cheese festival at the end of April or early May, which is very much a local event as it is in the region of Extremadura in the west of Spain and some distance from major cities. The area is famous for its sheep and goats ’cheeses (as well as jamón iberíco, ham made from the black footed pigs which dine on acorns) and rural cheesemakers take over the town for a weekend to present their wares. There are 300 cheeses to choose from many countries as well as Extremadura and at the same time there are cultural events going on in the town.

The small town of Trujillo is host to an annual cheese festival.

People buy tickets and receive a small piece of cheese for each one – definitely a local Spanish festival for cheese lovers. A particular favourite is the local cheesecake, called Torta del Casar and which is offered by the many restaurants located around the town square.

The area of Camariñas is famous throughout Spain and beyond for its beautiful lace making. The town itself hums constantly as the lacemakers shuffle wooden bobbins to create delicate lace. Once a year the town opens its doors for a festival in which lace takes centre stage and presents a fantastic exhibition of the handiwork produced there.

The festival is held at Easter and is really worth attending if you value expert workmanship. It is too a very pretty festival which exhibits lace from Galicia and also from another 12 or so countries. Last Easter there was a fashion show as well as a gastronomic event and plenty of folk music.

Perhaps you are wondering why Madrid is included in an article about small local Spanish festivals? It is because the many different neighbourhoods of this great city have their own, special, local events and the Fiesta de San Cayetano takes place in the Rastro/Embajadores area in August. These local festivals are called verbenas and are great fun, especially in the cool of the evenings.

The streets are decorated with lights and lanterns and inevitably there is plenty of drinking and dancing. If you live in Madrid, or any other large Spanish city, look out for your local district’s annual party and join in!