If you want to understand Spain, learn to love Flamenco

It’s easy to believe that everywhere in Europe is pretty much the same, until you see a true performance of flamenco. This is where the heat and passion of Spain truly comes to life in an unforgettable fusion of dance, music and song.

What does the word “Spain” conjure up in your mind? Sun, sea, sangria, quite possibly. Maybe a villa with a sparkling pool! But the true essence of Spain is, for its many fans, revealed in flamenco.

The oldest record of flamenco dates to 1774 and it is an art form most associated with the regions of Andalusia, Extremadura and Murcia. Each of these traditional flamenco regions celebrates its own version of el dìa del flamenco (day of Flamenco) each year.

The Romani people and flamenco

The Roma – or “Gypsies” – of Spain have made notable cultural contributions to Spanish culture, particularly with respect to music and dance. Flamenco was brought to Spain by nomadic people who migrated to Europe from north-west India in the Middle Ages. 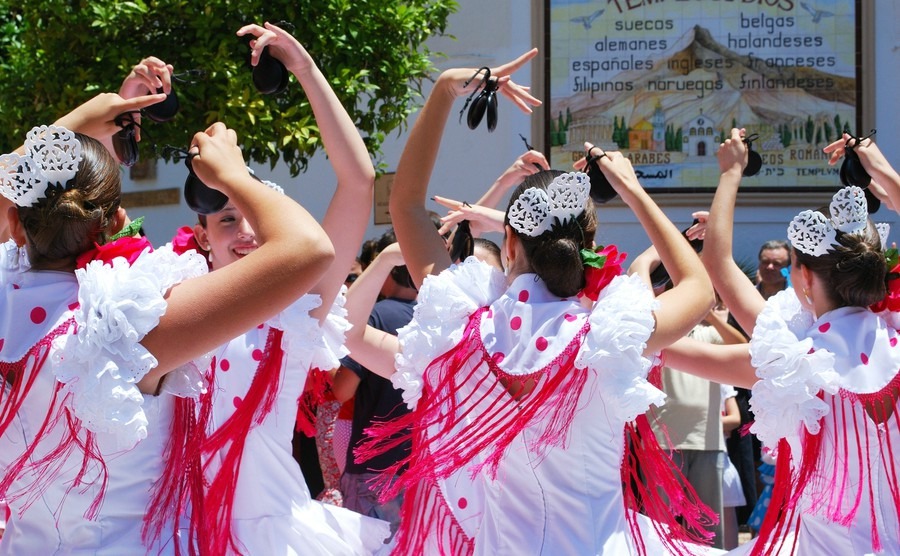 The roots of Romani culture are difficult to ascertain, but it is believed they emerged in India from around 600 AD. From there they travelled to North Africa and eventually into Spain. Consequently, flamenco as we know it is a mix of European, North African and Asian culture, adopted by the Romani on their travels.

Some say the word flamenco developed from the word “fire” because of the heated nature of the performance. Others suggest that Islamic Andalusian peasants, persecuted for their religion during the time of the Spanish Inquisition, joined the Romani to escape their tormentors.

Why not join the locals and try it for yourself, at one of the many flamenco classes that are run throughout the country?

A typical flamenco performance comprises song and guitar accompaniment to the iconic dance, famous for its vigorous stamping of feet and strong emotions. Classic flamenco performed by most dance troupes today is a very controlled version, with the back held in a certain position with limited hip movement. The more traditional dance is freer and wilder as dancers reach a kind of high, known as duende.

Flamenco needs many years of study and practice to perfect. It is a very technical dance requiring extremely fast footwork and precision, while at the same time using shawls or castanets.

The frilly dresses worn by the female dancers actually derive from the Sevillana costumes worn for the Feria de Sevilla – the annual festival in Seville. The Sevillana dance is very different from flamenco, however.

Immerse yourself in the local culture when you move to Spain, by enjoying this wonderful and exciting form of music and dance. Why not join the locals and try it for yourself, at one of the many flamenco classes that are run throughout the country? It will truly enrich your Spanish experience.