Did you know that the Patron Saint of England is also the patron saint of Catalonia? He is also the saint for other countries, such as Malta, Portugal, Georgia and Romania. It seems that he is celebrated in one way or another everywhere except in England. Could that be due to King Henry VIII, who was excommunicated from the Catholic Church and became the Defender of the Faith of the Anglican Church? I don’t know, but it seems a shame that there are no special festivities on his day.

Saint George was born under Roman rule in Syria in 280 AD. He is celebrated on the day of his death, 23rd April, in the year 303 AD. He became a Christian, a dangerous course under the Emperor Diocletian – especially if you were an officer in the emperor’s guard – and it was the emperor who ordered him to be put to death after years of torture because he refused to renounce Christianity.

The 23rd April or “La Diada de Sant Jordi” is widely celebrated in Catalonia, with almost every town setting up market stalls draped with the Catalan flag, selling roses or books. The idea is that men buy ladies a rose – their wives, girlfriends, mothers and grandmothers. The women buy their menfolk a book, and the gifts are exchanged later in the day.

It is believed that this tradition dates from the 15th Century, when pictures of roses being given to ladies as a symbol of love first appeared; and then he became the patron saint of lovers. Much later, on 23rd April, 1926, the date was declared “Book Day” in Spain, after the death of the most famous of Spanish writers, Miguel de Cervantes. From then, the two celebrations combined to establish St. George’s day as it is now honoured. 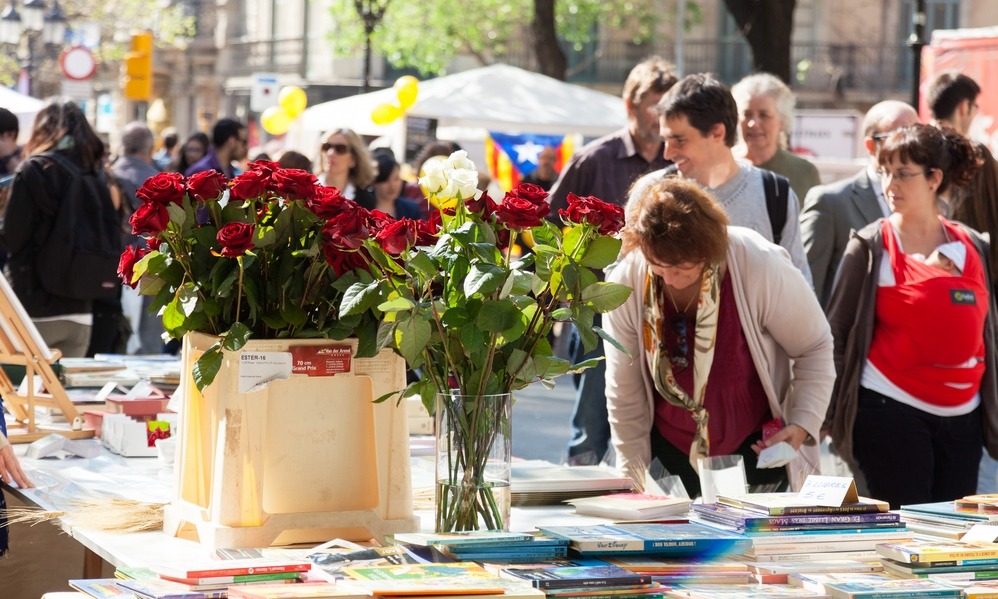 The legend and the cult

In larger towns, there may well be a re-enactment of St. George killing the dragon, a legend which has many interpretations. One is about a village in which the air was poisoned by a dragon and to placate him a lamb and a virgin were sacrificed. One day the Princess was chosen to be sacrificed, so George killed the dragon and freed her. The entire community and the princess immediately converted to Christianity. In 1456, the Catalan Parliament voted to dedicate 23rd April to the Saint and to be a festival day.

St George is usually shown on a white charger with a lance in hand, killing the dragon. In Barcelona, you can see one of Gaudi’s fabulous buildings, Casa Batlló, where the roof is in the shape of a dragon.

Although not actually a public holiday, La Diada de Sant Jordi is a very popular festival, and during that day around 40% of all roses sold during the year (that’s around four million) fiind their way into ladies’ hands, and in the region of 500,000 books are given as gifts. Throughout Catalonia, hundreds of thousands of people will have flocked to the market stalls, which begin to pack up at sunset, after a day spent celebrating love in all its forms.

The Catalan national dance, the Sardana, is danced in the squares to the sounds of a traditional brass band and people meet and chat in cafés, enjoying this happiest of days – usually in the sunshine.

Suggested photo – a book and rose market with the caption “Catalonia’s Day for St. George and for Lovers.”