Learning to love your life in Spain

In 2017 I will have been living in Spain for 10 years, says our Spain writer, Sally. Some of my friends back in Britain will congratulate me, others will wonder how I survived. The fact is, I have really enjoyed being here, though I would be lying if I said everything was always easy. For those of you coming to Spain to work or retire, here are some tips to help smooth your path.

If you want to be part of the culture and Spanish way of life, you will need to fall into their eating times

As anyone who has been on holiday in Spain will know, the Spanish have a completely different daily timetable to the British – everything starts and finishes later. While it is fun to dine at 11pm on holiday, you will probably find it less appealing when you live here. The problem is that if you go out for dinner much before 9.30pm you will find yourselves eating alone in a restaurant, which can be a depressing experience!

There are British-owned eateries which will cater for the Northern European timetable, but if you are living in Spain and want to be part of the culture and Mediterranean way of life, you will need to fall into their eating times. Lunch is anywhere from 1.30 to 4pm, depending on whether you live in the north or south of Spain.

You may find it hard if you immediately try to eat late, so try having lunch 15 or 20 minutes later than usual for a week, then add another 15 minutes to your waiting time and eventually you will find you are ready to eat at, say 2.30pm which is a very respectable time to lunch in Spain. Our bodies and minds get used to it with a little perseverance. 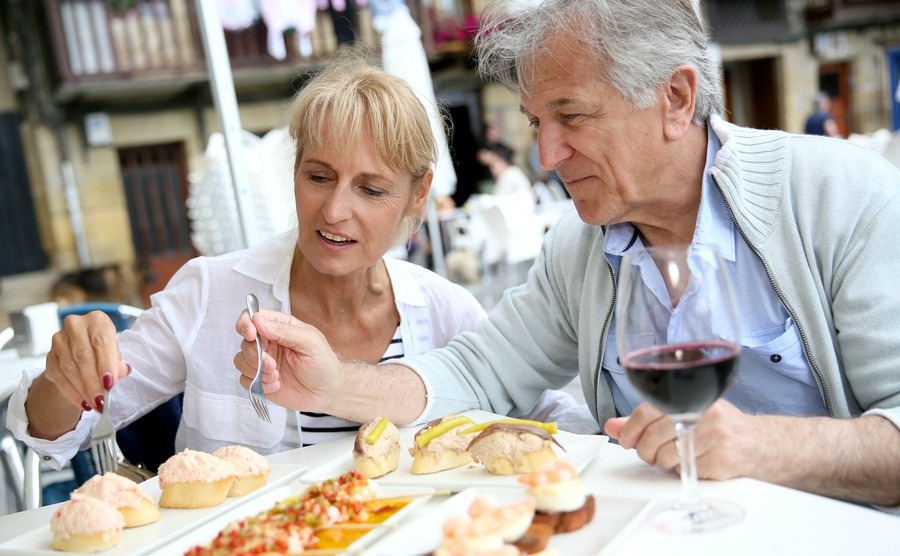 They say that Spanish babies are born shouting and they never stop! Spaniards are so enthusiastic about everything that they end up shouting about it. You will need to shout louder than they do to attract a waiter’s attention or to enjoy an evening in a tapas bar with friends. This takes considerable practice but those determined to join in will master the art of shouting eventually.

The best way to deal with this is to take a book or kindle with you and enjoy yourself patiently while you wait, or better still to start chatting to the others in the queue, which obviously requires some knowledge of Spanish.

Don’t forget to ask who is last in the queue and say buenos días to everyone in general.

Don’t forget to ask “quien es la última?” (who is last in the queue?) when you come in and also to say “buenos días” (good morning) to everyone in general.

Wherever there is a large British community, you will find plenty of restaurants and bars serving British food. If you just frequent these places, however, you will be seriously missing out on good local cuisine. It is true the Spanish use a lot of olive oil and garlic in their dishes but these are recognised as two of the healthiest possible ingredients, so try swapping the fish and chips and hamburgers and going for a menú del dia at lunchtime. It’s home-cooked food, usually a starter, main course and dessert, wine and bread included, for €9 – €15. Generally a meal costing around €12 will be better than average. Yes I did say wine included!

Three courses may sound a lot but the portions are not huge and there will usually be a salad or a soup among the starters. The wine can be variable; you’re normally better off sticking to the red in cheaper restaurants.

One of the best parts of living here is trying different local wines to discover which you particularly like.

Go a little upmarket and you’ll get a wonderful meal – fresh seafood, best quality meat, dishes containing pulses (a Mediterranean speciality, also very healthy). The wine will be better too, even if you just order house wine. Spain has such a vast selection of wines to choose from, one of the best parts of living here is trying different local wines to discover which you particularly like.

This probably should be top of the list. I urge everyone who is coming to live in Spain to learn basic Spanish at the least. It opens doors to so many wonderful things as well as being extremely useful for negotiating Spanish bureaucracy. You don’t have to speak it perfectly, but so long as the Spanish understand you and vice versa, you will be able to have interesting conversations, take part in group and sports activities, chat to your neighbours and most important of all, begin to feel that you belong in Spain, which is your new home.

Making mistakes is grammar is fine, no one minds. The Spanish themselves don’t always speak the best Spanish and of course there are many regional variations as well as regional languages.
I live in Catalonia where Catalan is the language most widely spoken and I did a one-year course when I arrived to get to grips with the basics. After that I could read newspapers and official letters and so on but I always speak to everyone in the traditional Castilian Spanish and no one objects. Sometimes I confuse the two languages, but it makes everyone laugh and let’s face it, laughing breaks down most barriers.

Yes, the Spanish do have a sense of humour too!