Firefighters save hundreds of British-owned homes

From Galicia to the Costa Blanca, Spanish firefighters have been battling wildfires that have devastated large areas perilously close to popular expats hotspots.

The first few days in September have been the hottest in Spain since 1988, with temperatures in the south soaring to over 40º and leaving the countryside tinder dry. The conditions, helped by arsonists in some cases, have led to forest fires across the Spanish mainland.

Fires reached the outskirts of Jávea and threatened to destroy whole urbanisations. Locals watched the flames creep ever closer to their homes, but after heroic efforts by firefighters and the army most of the endangered properties were saved and fewer than 100 homes destroyed.

More than 1,400 people had to be evacuated from homes and campsites in the province of Alicante

One homeowner took photos of someone apparently starting a fire and the police were urgently seeking the culprit. It later appeared more likely, however, that this was more a case of negligence rather than arson. Other fires were believed to have been started deliberately and in all 812 hectares have been burnt. More than 1,400 people had to be evacuated from their homes and campsites in the province of Alicante as the fires swept across, fuelled by high winds. Some of the protected park of La Gradella was affected and there have many photos posted online of complete devastation in certain areas. Residents were put up in schools, sports centres and hotels as the fires at one point stretched across seven kilometres. A second fire started around Bollula was thought to be due to a barbeque rather than arson.

There has been a lot of praise for the work of firefighters who battled through the night to control the fires, especially those around Jávea, saving hundreds of homes. The fires are thought to be the worst in the region’s history, which is popular with expats from Britain and Germany and tourists. 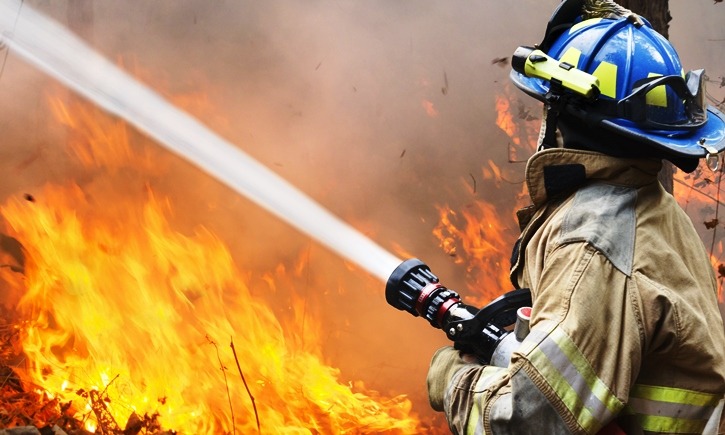 Firefighters save hundreds of home owners in the Costa Blanca

Ángeles Vázquez, a councillor for the environment in Galicia, said that the fires around Ourense were likely to cause a “critical situation”. More than 40 wildfires raged, with two major fires threatening houses in the region of Muiños. More than 6,000 hectares of wooded land were scorched in just two days, with arsonists blamed in some cases. This is a real catastrophe for the region, with many ecologically significant areas affected so badly the authorities described the situation as “apocalyptic”. Fires were burning close to the border with Portugal, which added to the concern.

Spain has seen unusually high extremes of temperatures for the time of the year. Inland Andalusia saw highs of 42º as did towns close to Madrid. The cities of Seville, Granada and Jaén, Toledo and Salamanca were affected and an astonishing 45.4º was recorded in the province of Seville. Temperatures had begun to fall by the end of last week.