Everyone knows the Costa Brava has a stunning coastline, but did you know a short trip inland will unearth stunning countryside peppered with ancient stone villages and historic towns and cities?

Over the last few weeks we have been exploring the Costa Brava, from Lloret de Mar in the south to Roses near the border with France. We crossed over from Baix Empordà (lower Empordà) to Alt Empordà (upper Empordà) and looked at the difference in landscape and coastal towns.

Now we head inland to discover the wonderful medieval towns and villages of the region which offer a more peaceful pace of life away from the coast.

Girona is the capital of the province of Girona and is an unspoilt gem.

Girona is the capital of the province of Girona and is an unspoilt gem that’s often overlooked by people who fly into the Costa Brava Airport on their way to Barcelona. Ryanair provides flights from all over Europe into Girona. Their schedule to and from the UK is seasonal, operating from Easter to the end of October. The city is just 90 kilometres from Barcelona and 60 kilometres from Perpignan in south west France.

The medieval centre is an absolute delight, with ancient cobbled streets, an imposing cathedral, museums and of course plenty of restaurants and bars to enjoy. Here you can explore some magnificent gardens, the Arab baths, the Jewish quarter and discover the fascinating history of this prosperous town, now renowned as a centre of law and architecture. There is a fabulous archaeological walk on ancient walls which offers far reaching views across the city. There are several well-kept parks; the largest is Devesa where there is a huge market twice a week and other events.

Culturally Girona is an important city with several theatres and concert venues, the most impressive being the Auditori built 11 years’ ago, which hosts some of the world’s best orchestras and artists. In fact music is everywhere in this town, with several music festivals held during the year.

The new town across the river Ter has pleasant residential districts and good shopping areas. There is also a large shopping centre on the outskirts and Ikea is apparently coming here in 2018. There is a strong British community in and around Girona with several associations and clubs, and the Ocine cinema offers films in English so you won’t miss the latest Star Wars offering.

These two towns north of Girona have very distinct features that make them attractive places to live. Banyoles is next to a lovely lake of the same name, where the Olympic rowing competitions were held when Barcelona was host city in 1992. The lake is a wonderful place to relax, walk and to see wildlife. The town itself is very pretty much in the style of Girona and has retained its Catalan roots.

Besalù lies 35 kilometres north of Girona and is famous for the bridge which leads into the town. Originally built by the Romans, it was destroyed during one of the many wars this region has suffered and was subsequently rebuilt. It is an imposing entrance to a glorious small town, steeped in history with pleasant squares and the only surviving Jewish mikvé (purification baths) in Spain. For centuries Christians and Jews lived here in peaceful harmony and Besalú was also a place of pilgrimage.

With only 2500 inhabitants it is a peaceful town surrounded by lovely countryside. It is a popular place for overseas property buyers. While not the cheapest area on the Costa Brava, there are many types of home to be found in the town and surrounding area to suit all tastes.

Head 29 kilometres south of Girona and you’ll discover La Bisbal. The word “bisbal” comes from the Catalan word for bishop, as the town was once Bishopric though it is built on a Roman site. Nowadays it is known mainly for its pottery and ceramics, and as the birthplace of the sardana, a circle dance typical of Catalan culture. There is a small medieval centre but much of the town dates from the 18th and 19th centuries. It is strongly Catalan but there is a British presence both in the town and surrounding it.

The countryside surrounding La Bisbal is pretty with many small medieval villages dotted throughout. Monells is particularly attractive. Here you’ll find a pretty circular main square and several good restaurants. There are also some upmarket hotels in the region and the thriving pottery industry attracts people from all over the world. Property here is more affordable than in other areas on the Costa Brava and is definitely worth investigating.

Pals is a beautifully restored medieval village, which attracts tourists from all over the globe. Nearby Massos de Pals and Platja de Pals are both popular destinations with British property buyers.

Massos de Pals is essentially several urbanisations combined, offering a wide selection of properties, an excellent supermarket, chemist, golf course and other useful amenities. Property here varies in price, with some lovely homes in the district. Platja de Pals is a village by the sea a little further on from Massos de Pals. Here too there are restaurants, bars, shops and a plentiful supply of properties. 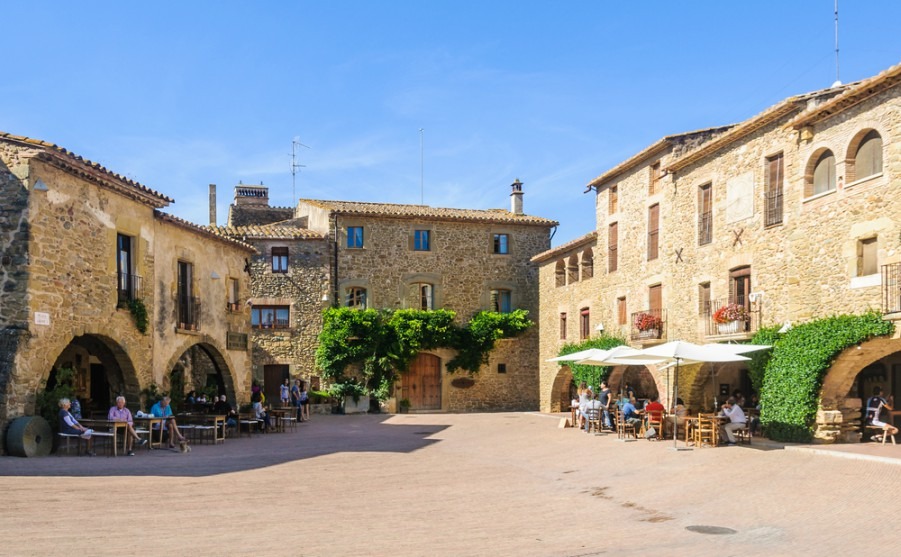 Can you see yourself sipping wine in the main square in Monells? (Gabor Kovacs Photography / Shutterstock.com)

With a population of around 23,000 Palafrugell is one of the larger towns of inland Empordà. It is a real working town, but also attracts tourists from the neighbouring beaches of Tamariù, LLafranc and Calella de Palafrugell, as well as other villages such as Begur and Pals. Some would say it isn’t particularly pretty but once you are in the centre you’ll discover a certain charm. It has a large main square with bars and restaurants, a pedestrianised shopping centre, a theatre and a cinema (which shows films in the original language). The wonderful cork museum, housed in a refurbished old cork factory, is well worth a visit.