The complete and utter joy of winter in Spain

The days are longer, the sun still shines and the weather is mild. Winter is when the advantages of your new life in Spain really shine through. So don’t sit and hibernate through the British winter, move to Spain and try out these ideas.

The climate in Spain varies from north to south and east to west, so don’t assume everywhere offers the chance to sit out on your balcony in January or enjoy the golf course in February. Overall, however, apart from in the mountainous regions such as the Pyrenees and Sierra Nevada and central inland areas, winters are mild and sunny. In November some regions did get an unexpected snowfall, but for much of Spain the New Year saw unusually high temperatures. So why is Spain such a great place in winter and what can you do in the colder months?

Being a thousand miles south of the UK, Spain doesn’t get such short winter days

Being a thousand miles south of the UK, Spain doesn’t get such short winter days. This weekend, while the UK only gets the sun up (if it comes up at all) from 8am to 4pm, in southern Spain we have an extra two hours of daylight in the evening. What is more, for most of that time the sun is shining; in fact most of Spain gets three or four times more sunshine than the UK.

While you won’t see many Spaniards doing it, you can still swim in the sea in winter. Even in the depths of January the sea temperature off Marbella is 16°C or more – which is what the temperature off the south coast of England is like in August! If your New Year’s resolution was to try something new, how about surfing on the Atlantic coast or windsurfing on the Med? You’ll have the beach to yourself.

The festivities in Spain are traditionally a month long, starting on 6th December and ending on 6th January. There is plenty to enjoy during these four weeks, especially the Christmas lights in the larger towns and cities. Málaga usually puts on a spectacular show as do Madrid, Barcelona and Seville. They also have Christmas markets to wander through – take a look at the stalls selling miniature figures, trees, buildings and accessories for creating a nativity scene.

Apart from Christmas and New Year, there is the day of The Three Kings when there is a procession, often with horses and carriages, through the streets. On the coast, the three Kings might arrive in a boat with their entourage. A fun spectacle for all ages. 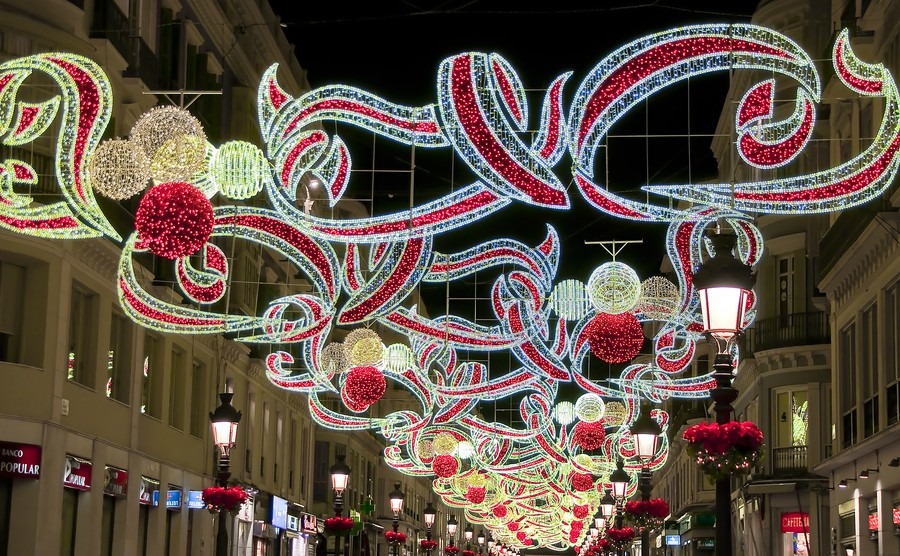 The Christmas lights of Málaga

Head for the slopes

Skiing in Spain is for all the family, many leaving the cities for a weekend in the snow. It is also less expensive to ski here than in France or Switzerland.

Skiing in Spain is for all the family, many leaving the cities for a weekend in the snow. It is also much less expensive to ski here than in France or Switzerland and there are several smart resorts, particularly in the Sierra Nevada near Granada. The Pyrenees tends to cater better for families and Andorra is just over the border from Spain for those who want a slightly different experience. There are other smaller ski resorts near Zaragoza, Valencia, Madrid, Salamanca and all along the northern coast. For those areas that get snow but without the altitude, sports such as snowshoeing are a fun and affordable alternative.

While summer months tend to be on the hot side, a run or jog or cycle through your local park can be a real pleasure in winter. Most large towns and cities have parks or if you are by the sea, there are places close to the beach to exercise. You may not be in a t-shirt, but it is still a fun way to spend a morning or afternoon. In many parts of Spain it will be comparatively warm, which is why sport is an all year round activity here.

If I’ve convinced you and you’re ready to buy in Spain in the next three months, call our friendly Spain Resource Team on 020 7898 0549 or email [email protected].

And while a New Year country walk in the UK might have been less appealing with storms Dylan and Eleanor blowing you about, Spain’s longer winter days and milder weather could be just the time to tackle one of Spain’s long walks. Check out the 100-plus Grandes Recorridos of which the Camino de Santiago is the most famous.

If you can’t manage much more than a salad in summer, winter is the time to really get stuck into the wonders of Spanish cuisine. You can ditch “dry January” for a start – the Spanish don’t drink to get drunk so there’s no need, and the tapas that are served with your drink are wonderful. Try a classic chorizo cooked in cider – it is really delicious, or perhaps stuffed mushrooms. Each region will have its own specialities to savour. In Catalonia street sellers offer baked sweet potatoes as a snack and in most of Spain you’ll find roasted chestnuts.

Stews with sausage, chorizo, potatoes, peppers and plenty of herbs and seasoning are more than welcome on a chilly day.

Winter is also the time for big Spanish stews. If you like lamb, Madrid and surrounding towns make fabulous lamb casserole dishes. In other regions wild boar is the preferred meat. Stews with sausage, chorizo, potatoes, peppers and plenty of herbs and seasoning are more than welcome on a chilly day. Don’t take my word for it, try them yourselves. 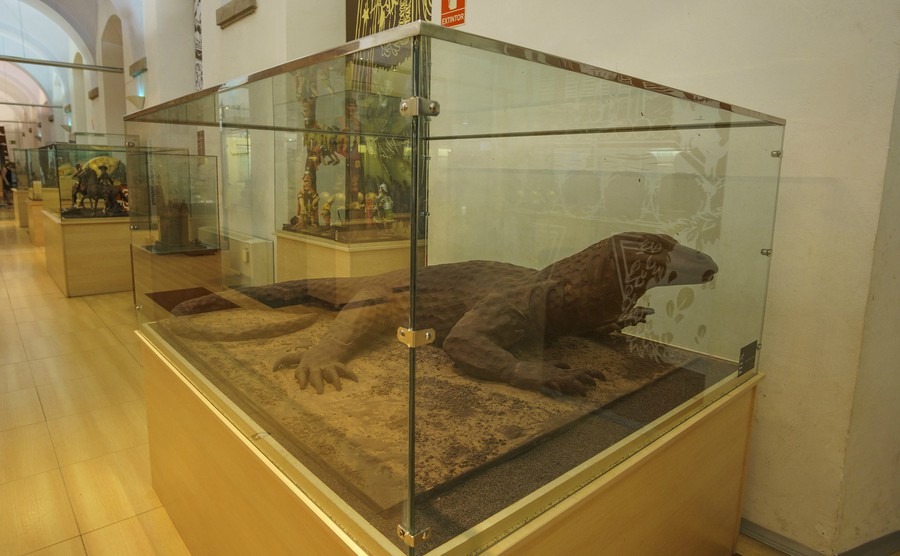 Be a culture vulture

You may be surprised at the number of wonderful museums and art galleries there are in Spain, offering a warm environment in which to pass some time. Most people will know of El Prado in Madrid, but did you know there is a fantastic Museum of Chocolate in Barcelona which will delight the whole family? In Málaga there are two unusual museums amongst the many: a privately owned museum of glass and an automobile and fashion museum, which marries vintage cars to fashion outfits of the same era – something for both the guys and the girls.

Several towns have torture museums; not everyone’s cup of tea but there is a lovely little museum of jam in a village called Torrent on the Costa Brava. Another museum for the whole family in Madrid features a little mouse called Ratoncito Perez, well known to all Spanish children and who is perhaps the equivalent of the English tooth fairy. There is no need to stay at home in winter, get the family out and about and visit some of the unusual and interesting museums.

Sit outside a café

Take your place at the pavement café and do some people watching. In much of Spain you can still sit outside during the day in winter whilst enjoying a beer, a glass of vino or a nice warming chocolate con churros. Perhaps you’ll need to wear a jumper but the sun shines a lot even when the temperatures fall. Many places have outside heaters and the sun can feel quite strong by 1 pm. You’ll find yourself taking off a couple of layers of clothing.

Get there so easily

Is there another two countries that have better year-round flight options that the UK and Spain? If you buy in Greece, Turkey or much Italy you can struggling for flights, but not in Spain. Southend to Alicante in February? No problem, and just £70! Bristol to Barcelona in January? Just £50.