Bonfire night in Spain, not for the faint-hearted!

In Spain you can enjoy Bonfire Night in a warmer setting. The festival of San Juan in June is celebrated with fire, water, medicinal herbs and plenty to eat and drink.

Living in Spain, you won’t miss out an an annual bonfire party

While last weekend the UK enjoyed firework displays and bonfires to commemorate Guy Fawkes’ failed attempt to blow up Parliament 400 years ago, November is a rather more sombre month in Spain. The first day of November is All Saint’s Day, when people remember their departed love ones. Flower sellers do a roaring trade around this particular bank holiday, with chrysanthemums supplied in abundance for people to take to the cemeteries.

The origins of the Festival of Sant Juan, held on 23rd of June each year, can be traced back to pagan festivities to celebrate the summer solstice, which in years gone by was a joyful occasion as the winters were hard and long and days were short and dark.

The festival is celebrated in different ways around Spain but should include fire and water. The sight of hundreds and even thousands of people wading into the water in the glow of the bonfires dotted along the beach is a sight to behold.

In the southern coastal regions such as the Costa del Sol, people light bonfires on the beach and many local authorities give permission for camping on the night of San Juan. On the beaches of Malaga it’s common to see people jumping over the fires, which according to legend cleanses the body and soul. 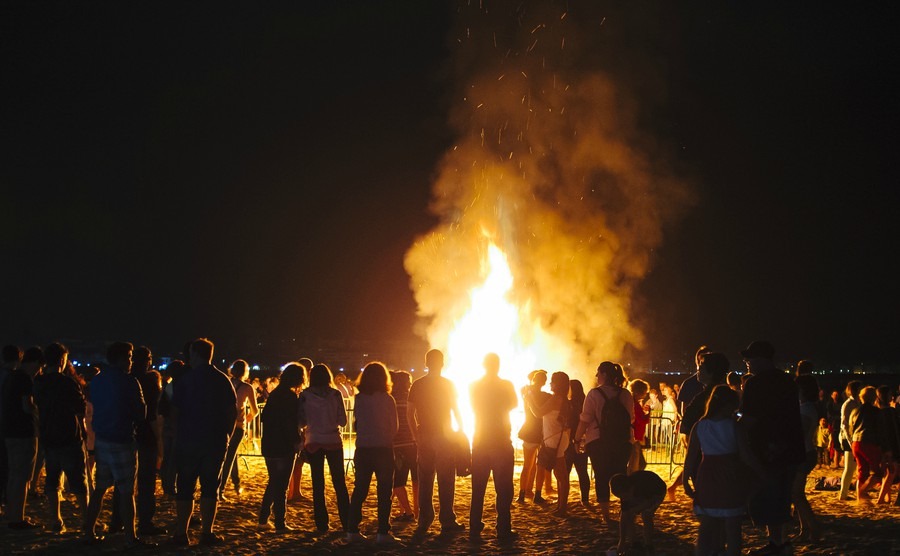 After midnight, people paddle in the sea to wash their faces and feet three times in order to be granted three wishes and for a happy 12 months thereafter. The sight of hundreds and even thousands of people wading into the water in the glow of the bonfires dotted along the beach is a sight to behold.

Rather like Guy Fawkes, the Spanish often burn dolls which are dressed and painted to look like notable political figures or celebrities. Traditionally the burning of these effigies is supposed to bring good fortune, but nowadays it’s merely a fun event for everyone to enjoy.

Accompanied by music, dancing, drinking and eating the Festival of Sant Juan is one of Spain’s major celebrations. A chance for people to let their hair down and spend time with family and friends.

Galicia (San Xoan): In Galicia the bonfire doll is replaced by a dummy which looks like a witch or a devil. While it is burning, the locals stand around and eat a traditional meal of maize bread, sardines and boiled potatoes in their skins.

The women of Galicia collect herbs and medicinal plants and hang them in bunches in their doorways, or they are dipped into water and left overnight to ward off evil spirits. They wash their faces in the herbal water in the morning.

Catalonia (Nit de Sant Joan): Fire is the main ingredient in Catalonia and people often refer to the 23rd July festivities as the nit de foc (night of fire). Barcelona holds an amazing festival with bonfires and firework displays along the beaches, attended by 70,000 people. The traditional food and drink consists of coca bread, which is a kind of brioche topped with candied fruit, and of course cava.

People roam the streets dressed in all manner of costumes throwing bangers, petards, which never fail to startle. You probably won’t get much sleep on 23rd June, with the noisy celebrations continuing into the early hours. Fortunately, 24th June is a Public Holiday!