The blistering heat has gone, but we can still sit outside a café feeling warm sunshine on our back. A delightful time of year, gentle autumn in Spain allows us to prepare for the colder months with a multi-coloured canvas of hues, sunny days, cool nights and many festivals.

It is mid-October here on the Costa Brava and today I walked into town in a t-shirt. Above were clear blue skies with the occasional puffy cloud and I felt a gentle breeze on my shoulders. Some weather forecasts said we would have rain but they were wrong, as is often the case with Spanish forecasts.

Autumn is unpredictable: you might be wearing a short-sleeved dress today and a woollen sweater tomorrow

Autumn in Spain is glorious, even here in the north east. The nights are much cooler, requiring a jacket, but the days are warm and generally sunny. Leaves on the trees have turned a golden reddish colour, though many still remain green. Most tourists have returned home and the beaches have been given back to the locals, with a few brave souls going for a swim in the sea. Others are lapping up the rays of the sun before heading off for a lunch.

Of course, each region has its own autumn climate. Where I live it is cooler than in southern Spain, less rainy than in the north-west and, as with many central areas, temperatures are not as demanding as in the summer months. Autumn is unpredictable though and you might be wearing a short-sleeved dress today and a woollen sweater tomorrow.

Here in the north east we do get foggy mornings, which eventually break into lovely sunny days, while in the south the sun continues to shine most of the time but with a less intense heat than in the summer. An umbrella is useful as it could just start to rain. This is probably the shortest season but also the most enjoyable. 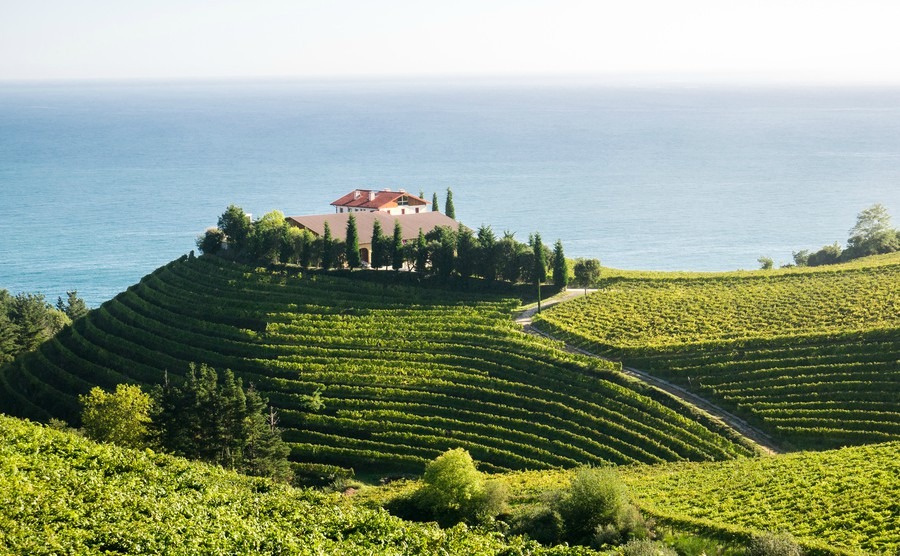 Time for the grape harvest in Spain

The Pyrenees, which border France, are perfect hiking country in the autumn. Glorious valleys and lakes, ancient forests and wonderful rock formations make this area a walker’s heaven, before the winter descends and the skiers arrive. The National Parks in this region are home to many birds and other wildlife and one of them, the Ordesa and Monte Perdido National Park, is quite rightly a UNESCO world heritage site.

Glorious valleys and lakes, ancient forests and striking rock formations make this area a walker’s heaven before the winter descends and the skiers arrive.

The Sierra Nevada in Granada province can also be much enjoyed in autumn, before the snow falls. Here you will find glorious golden forests, fast flowing rivers and deep lakes. There is a wide variety of flora and fauna in the area and there are numerous trails to follow that wander through the mountain range.

The region of La Rioja is synonymous with wine. Autumn is the time of harvest festivals and the capital city, Logroño, hosts a wonderful festival dedicated to wine. Amongst the various activities, the most spectacular is the “treading the grapes” when numerous young people dressed in traditional costume tread the recently harvested grapes with their feet to produce the first juice of the season.

Sant Sadurní d’Anoia hosts a Cava festival in October. One of the highlights is a ride through the vineyards on an electric bike, which ends with a chocolate tasting. Peñafiel remains the only place which celebrates young wine, and the associated activities favour young children as well as adults young at heart. Among the festival’s activities it is traditional for young people to take part in a play about harvesting the wine. 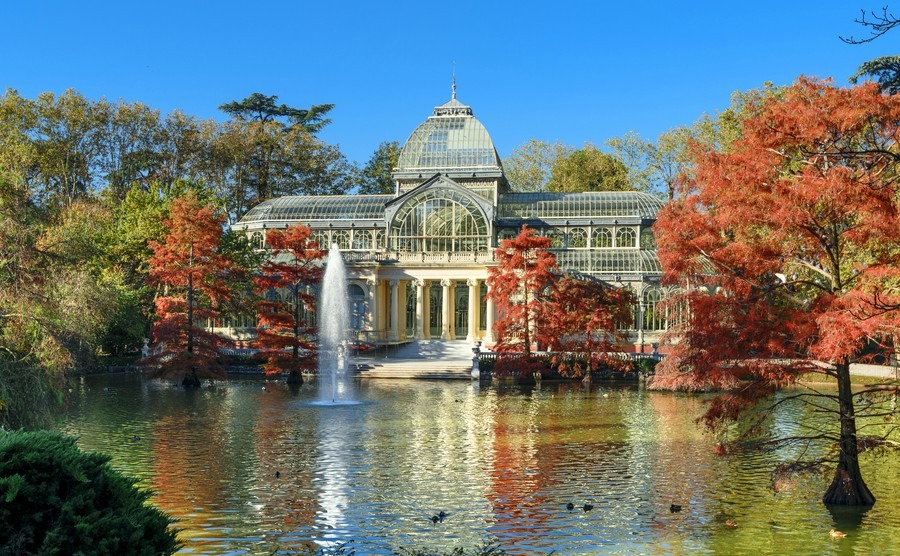 Retiro Park, Madrid with autumn leaves and the crystal palace.

Autumn is a wonderful time for Spain’s islands too. Majorca is still warm and sunny but without the summer crowds. The sea is warm enough for swimming and water sports, while a visit to the Tramuntana mountains will be cooler. Playing golf and tennis is no longer quite the ordeal it can be in high summer! The autumnal colours are a perfect backdrop for the many activities still going on.

Lanzarote and the Canary Islands in general are the best places for Spanish autumn weather. Don’t just think of the beach, inland there are dramatic landscapes and small villages to enjoy. The village of Mancha Blanca holds a festival every autumn dedicated to Our Lady of Sorrows (Virgen de los Dolores) when people from all over the islands come dressed in their traditional costumes.

Scorching during the summer months, Seville is the place to visit in the autumn. There are plenty of cultural events at this time of year to keep you occupied. It is also the best time to enjoy the city, its historic centre and monuments without the crowds or to sample the wonderful tapas on offer in one of the numerous bars – and to find space in which to enjoy them.

Cartagena in Murcia is very pleasant in the autumn, still warm with abundant sunshine. It has many archaeological sites to visit, as well as the port with its bars and restaurants. The beaches nearby are less crowded with plenty of space in which find a corner for sunbathing.

Autumn in Madrid is a riot of reds, golds and yellows, with its many parks offering shade from the still warm sun and temperatures in the low 20s. It can be rainy too but never for too long. A wander through Retiro Park confirms all that is beautiful in autumn, while the most amazing sunsets can be seen from behind the Temple of Debod, which was a gift given by Egypt to Spain.

Wherever you are in Spain, autumn is a season which gently breaks into winter, a season of colour, festivals, harvesting, sunshine and warmth.