And now for some good news from Spain

Spain has been in the press for all the wrong reasons recently, but there is good news too. Andalusia is eliminating inheritance tax for estates worth less than €I million, Spanish store prices are stable, taxi drivers are learning English and Game of Thrones is coming to Barcelona.

The Andalusia region has drastically reduced inheritance tax for estates worth less than €1 million. From now on, the deceased’s spouse and 95% of children will inherit from their parents without pay any tax at all. For many, this will be seen as a huge relief. Gifts to children will also not carry tax if they are under €1 million, but there will be strict criteria, to be confirmed. So far, it looks like this will only apply to Spanish and EU citizens – yet another reason to stay up to date on Brexit news.
Other autonomous regions are reducing inheritance tax too and these include Madrid, Basque Country, La Rioja, Navarre, Catalonia, Valencia, Balearics and Canary Islands. One lawyer, Raymundo Larraín Nesbitt, said: “For once, I’m happy to commend politicians on adopting a sensible tax measure that benefits so many and contributes towards dynamising the Andalusian economy.”

Now, 95% of children inheriting from their parents will not pay any tax at all, nor will the deceased spouse.

Following on from our cost of living survey last week we were interested to see a new report from the Organisation for Consumers and Users (OCU, a little like the British organisation Which?). This looked into which were Spain’s most and least expensive supermarkets. The most expensive chains were El Corte Inglés, then Supercor and Carrefour Express. At the budget end were Alcampo, Mercadona and Carrefour. The average difference in price between the most expensive and cheapest was €909 over the year, for the same range of goods.
The report also found that, overall, prices had risen just 0.1% in the past year, but that fresh produce had gone up the most, by up to 5%. It may not come as a surprise if you live there, but Catalonia and the Balearic Islands were the most expensive regions, with La Rioja and Galicia cheapest.
In other retail news, Uniqlo, the Japanese fashion store has finally opened in Spain with a shop in Barcelona, in Passeig de Gracia. Located close to rivals Zara and H&M, the founder of Uniqlo, Tadashi Yanai says he welcomes competition. “Ultimately, the customer will decide” he said recently. He plans to open another shop in Madrid in the near future. 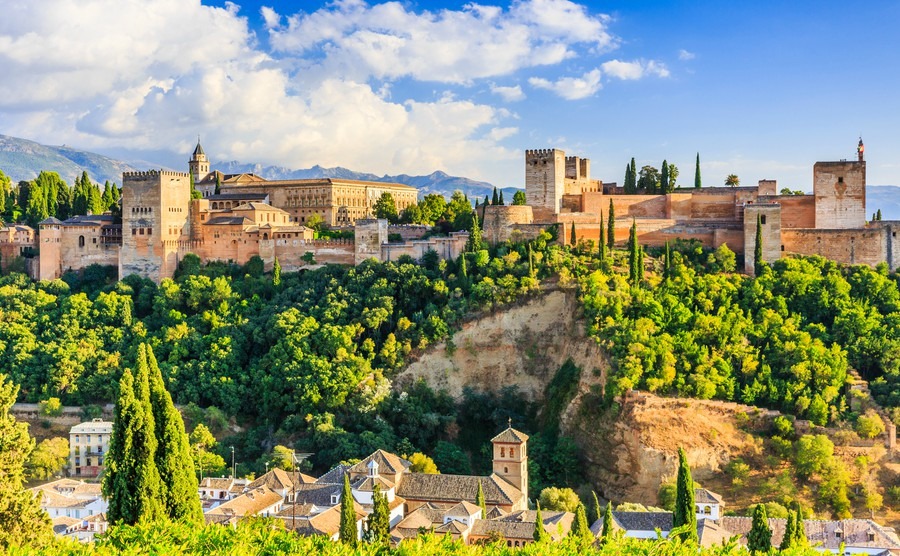 Granada: the Alhambra AND the cheapest supermarkets?

Alhambra arrives in the 21st century

The cheapest individual supermarket from the OCU survey was in Granada, where the Dani supermarket is a lifeline for impoverished students. Elsewhere in Granada, the beautiful Moorish palace, the Alhambra, has got its act together with ticketing. With 2.7 million visitors each year – that’s 200 every 30 minutes – the queues for tickets had become an embarrassment in this tourist-loving land. Now it is possible to book online and print out your tickets before going. That’s quite a relief for those of us who have to take visitors there frequently! In order to avoid illegal sales, you will need to type in your NIE number or passport number. You will continue to be able to buy tickets at the entrance if you don’t have access to a computer and printer.
Security at the site has been tightened as a precaution following the attacks earlier this year.

If you are ready to buy a home in Spain in the next few months, Property Guides will be at Your Overseas Home. It’s a new style of overseas property show, where those serious about buying can get detailed information around topics such as Brexit and introductions to trusted lawyers, agents and currency providers. Click here to apply for FREE tickets.

Game Of Thrones arrives in Barcelona

If you think Madrid has a problem with its provinces, imagine trying to keep control over the Seven Kingdoms of Westeros in Game of Thrones – Mariana Rajoy could do with a dragon or two. For GoT fans, and the Spanish most certainly are, the good news is that a touring exhibition will open in Barcelona on 28th October. Visitors will be able to venture into the land of Fire and Ice featured in the hit TV series. The exhibition totals 929,000 square metres and is interactive, where visitors will find themselves in the middle of the Seven Kingdoms. Here they will be able to have a close look at genuine props, set decor and costumes from the show and enjoy settings and media content.

Madrid’s taxi drivers have been signing up in their hundreds for a new English course that will enable a sticker saying “This taxi speaks English”. The online course devised by Universia has attracted 500 taxi drivers so far, who see it as another service, along with GPS and air-conditioning. As one driver told El Pais newspaper: “More and more foreigners are coming to Madrid for business and leisure, they account for practically half my rides.” Yet another reason to not bother learning Spanish? Maybe, but a new report in the English press says that learning a new language is about the best way of avoiding dementia.

Also in Madrid, a new car sharing opportunity is coming, following an agreement between Renault and Ferrovial, the service company. The new operation is to be named Zity and will have a fleet of 500 Zoe electric cars which can run for between 300 and 400 kms before needing to be recharged. Mercedes and Citroen already run a similar service in Spain’s capital which help to reduce air pollution.