Travel just a few kilometres inland from Spain’s southern costas and you’ll find a world of rural tranquillity, bucolic beauty and a real sense of community. There are still plenty of other international residents too, but a more authentic Spanish feel. So where should you buy? Andalusia is a vast region, larger than Scotland, so we can’t cover the entire inland area. But we do highlight a few beautiful areas and lively towns to start your search.

When you think about ‘real’ Spain – not just the costas, but the heart and soul of the country – the images that pop into your head are probably those of Andalusia. Olive and almond trees, fighting bulls, white villages among mountains, hot town squares with welcoming tapas bars, flamenco and heat!

It’s easy to buy in Spain this autumn, so long as you have some help. Click here to meet your ‘Golden three‘, the lawyer estate agent and financial experts to make it happen.

We know that many international buyers would love to move here or buy a holiday home. You told us so in the 2020 Spain Property Guides Reader Survey. Nearly one in three readers said they were interested in farmhouses in Andalusia in the south of Spain. 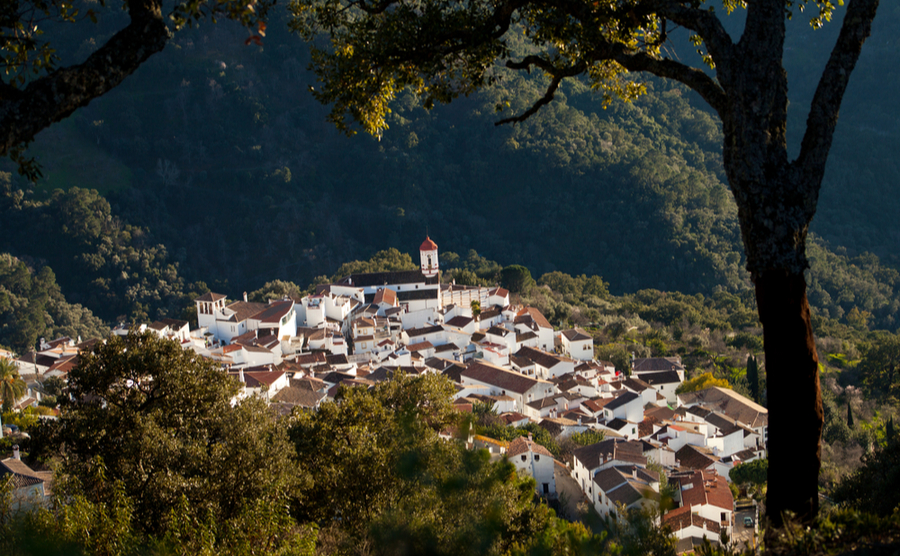 Andalusia or “Al-Andalus” – the name the Moors gave to the area – is today one of the most popular regions in southern Europe for people of all nationalities who want to settle in warmer climes in areas with history, culture and lovely landscapes. The British are the leaders looking to buy and despite the restrictions brought about by Covid-19, it is still the major destination for would-be buyers in Spain.

Of course, everyone has heard of the Costa de Sol which is permanently popular but venturing a little way inland, perhaps up to one hour’s drive from the coast will take you to a completely different world, one of tranquility, small villages, lovely mountains, pleasant towns and a leisurely pace of life.

Las Alpujarras is a 70-kilometre set of hills and high villages on the southern slopes of the Sierra Nevada mountains, a little south-east of Granada and 20 kilometres inland from the Costa Tropical. Its appeal was highlighted in the books of Chris Stewart, beginning with Driving Over Lemons, a funny and realistic account of one couple’s move to a remote part of the region, which is being re-released this year.

The landscape is stunningly beautiful and quite wild, with terracing introduced by the Moors, streams gushing with melted snow in the spring and pink almond blossom in the hills. It’s the kind of area where you might still see a shepherd or a farmer on a donkey.

The Alpujarras offer everything you might want away from the more crowded coast, including a sense of rural community, but you’re still still within reach of the sea, just a 30-minute drive away at Almunecar and Salobrena.

You have the delights and history of the city of Granada, skiing in the Sierra Nevada in winter and year-round golf too, of course. There are two courses close by: Santa Clara Golf near Granada and the Granada Club de Golf. 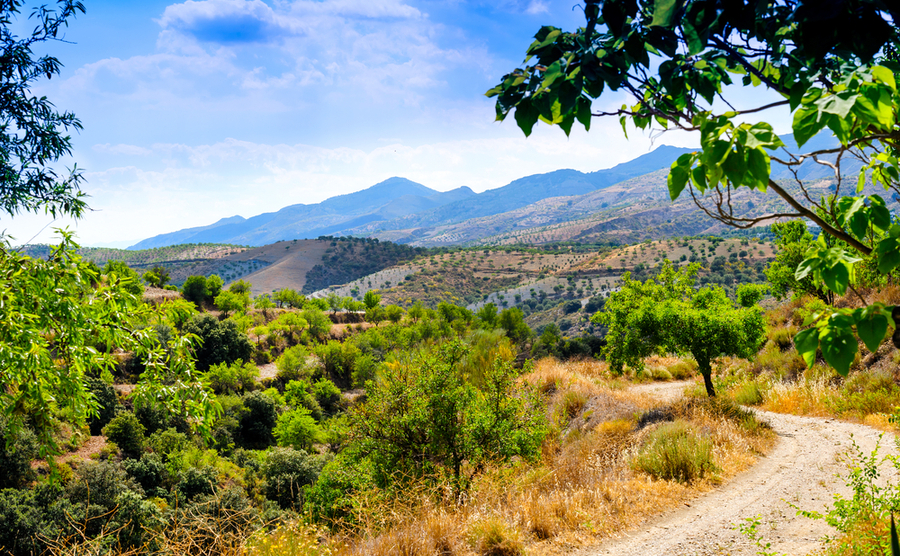 Where to buy in the Alpujarras

Notable places to buy include the town of Lanjarón which is known for its thermal waters and has encouraged ‘wellness’ tourism, yoga retreats and suchlike.

The town of Dúrcal (population just over 7,000) is a little further north, the perfect location if you love nature, hiking and history. Agriculture is still the biggest business here, with olives, almonds, cereals and citrus fruits, plus sheep farming.

The village of Trevelez is reputed, at nearly 1,500m, to be the highest in mainland Spain, its cool fresh air giving a unique flavour to its award-wining jamon – served in its many tapas bars.

Órgiva is one of the popular locations for international buyers – although still only around 5,000 people – with a distinctly bohemian atmosphere.

You can still buy a small home in a ‘white village’ or town here for upwards of €50,000, or a run-down cortijo with a decent-sized parcel of land. If you fancy emulating the Driving Over Lemons lifestyle, however, do bear in mind that without the feather-bedding of some best-selling books, the lifestyle can he hard and remote!

Last Christmas I was in Málaga and found myself in a small shop tucked away down a side street. The owners were very chatty and asked if it was my first visit to the city. I replied that no, I have actually visited it nine times. “Would you like to live here?” they asked. I replied that as much as I love the city it is a little too hot and humid. “Well, then you should live in Antequera,” they said. Indeed, I certainly could live there.

I first went to Antequera in 2000 and have been returning at regular intervals. It is a delightful town of around 42,000 people. The sea and Costa del Sol are just 60 kilometres away. 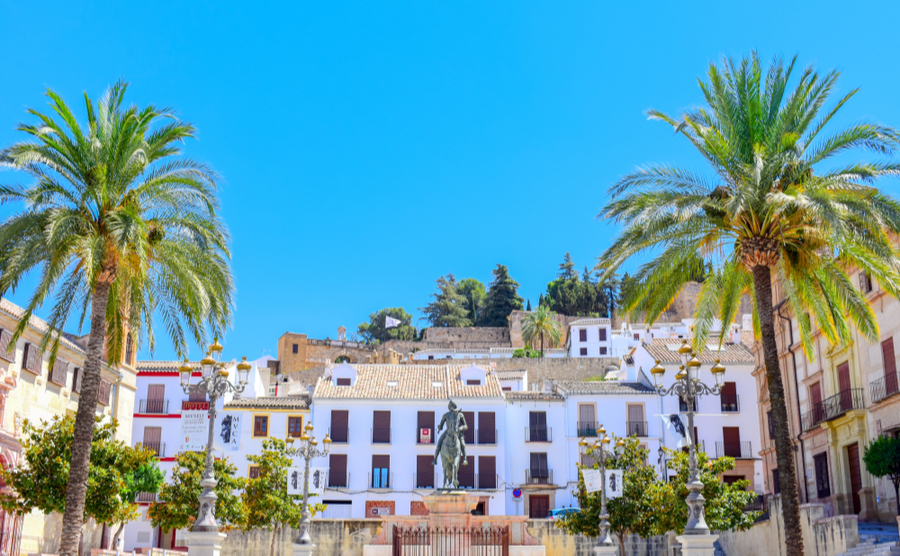 Antequera is in the foothills of El Torcal, overlooking a fertile valley of olive trees. Oil production is one of the main industries. Its history is fascinating, stretching from the Bronze Age via Romans, Visigoths and Moors, all of whom have all their mark on the town.

The town has some wonderful baroque architecture as well as the typical white painted houses with terracotta roofs. The old town at the top is a typical “white village” and is mainly residential these days. It is a calm town, with many people passing through but most not stopping. The Moorish castle, the Alcazaba, dominates the town.

Thirty kilometres to the west is El Chorro, with lakes and pine forests, perfect for a day canoeing, fishing or having a picnic under the shade of the trees. Antequera Golf is just six minutes’ drive away. Tapa bars are very much in evidence, especially around Plaza Portichuelo and Plaza San Francisco, home to the covered food market.

Property prices start at €100,000 for a three-bedroom townhouse, €400,000-plus for a farmhouse and in the millions for an eight-bedroom cortijo.

Travel to Antequera, and indeed to much of inland Andalusia, is easy, with good roads and train services both along the coast and towards Madrid.

A few other areas of inland Andalusia

Berja lies between the Alpujarras and another range called the Sierra de Gador, stretching into Almeria province, amidst orchards, vineyards and pasture. It has a population of around 13,000 and is 85 kilometres from Almeria airport and 15 minutes of the coast

The Romans were here and, of course, the Moors. The town is overflowing with water – fountains and springs are everywhere which is vital for irrigation. Paper, cotton and linen are the town’s other industries and once upon a time there were 30 water mills. Parque Periurbano de Castala, is a wonderful natural area clothed in Aleppo Pine trees which today is used for leisure by residents of Berja and surrounding villages.

For less than €100,000 buys a good-sized home or farmhouse, and €300,000 gives you a real taste of luxury in this easily accessible corner of inland Andalusia.

Towards the coast, you’ll start to come across resort style property, for example in the popular village of Vélez de Benaudalla, 10 minutes from Salobrena, with two-bedroom homes with communal pools from around €80,000.