A trip along the Costa del Sol

The preferred place for many British people for retirement or a second home is the coastal region of Andalusia known as the Costa del Sol. Here are the residential highlights, and a few favourite golf courses too.

Since package tours started in the 1950s, the Costa del Sol has probably been Spain’s most popular region. The most beautiful and glamorous people on the planet were associated with it – Grace Kelly, Frank Sinatra, Marlon Brando… – drawn to its glorious climate and stunning coastline.

For a while, in the 1970s and 80s this stretch of coast became associated with cheaper tourism. Now, it is most definitely back at the glamorous end of the market. As one buyer told us: “I remembered if from 20 years ago as being super super-tacky. But we went on a family holiday to Estepona and they had built up the boardwalk and made it look beautiful. I said to my wife, ‘wow this has really changed, maybe this is something we should look at’”. With the tourist authorities devoted to quality above all, the Costa del Sol’s long sandy beaches, white villages and Spanish way of life are attracting the global jet set again.

Why not split the cost and double the fun of owning a holiday home on the Costa del Sol by buying with family or friends? Read our new guide, Buying Abroad with Family.

There is a lot of variety however in landscape and types of property, so we are taking a look at what’s on offer.

The Costa del Sol lies in the south of Spain and officially begins in Torremolinos, stretching down to Estepona. It is in the province of Andalusia, which for many is the spiritual home of Spain. Although heavily influenced by tourism and the large British/international community here, it remains very Spanish. 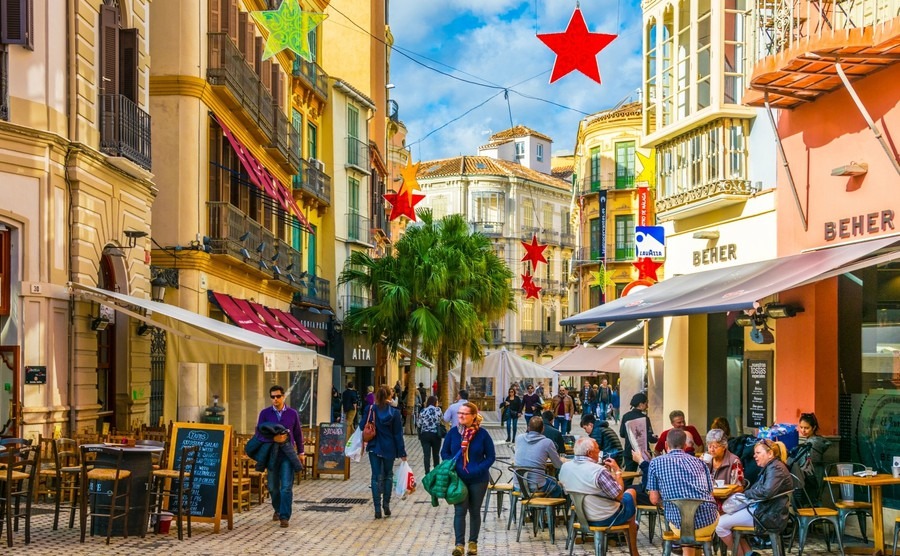 There are several towns along the coast, those to the east are close to Málaga and those in the west are within easy reach of Marbella.. These two main towns are very different in character but both offer excellent amenities and leisure activities.

Málaga in recent years has undergone a total facelift. It is now a delightful city with a smart promenade, many upmarket hotels and shops and several top class museums. In 2014 it was declared the best place to live in Spain. The centre of culture on the Costa del Sol, Málaga has a great music scene and plenty of bars and restaurants to enjoy. The international airport receives in the region of 15 million passengers a year.

A city of almost 149,000 inhabitants, with 15.9% coming from foreign countries, Marbella offers a high standard of living and a multicultural society

Marbella has a wonderful traffic-free old town with cobbled streets and little squares. The new town which borders the sea is full of restaurants, bars, shops and a pleasant garden on the promenade. Its climate is warm all year round as it is protected by the Cordilla Penibética mountain range. A city of almost 149,000 inhabitants, with 15.9% coming from foreign countries, Marbella offers a high standard of living and a multicultural society. The Costa del Sol Hospital is the main hospital for the region and is located here.

Tucked just below Málaga is Torremolinos, a very popular place with the British and Dutch, both for property purchase and for tourism. Once upon a time a small fishing village, it is now the most popular tourist destination in Andalusia. The promenade has recently undergone some renovation and the authorities are constantly updating parts of the town. Brigitte Bardot, was a regular visitor in the ‘50s and ‘60s. She helped to popularise going topless on the beach in what was then a somewhat backwards and conservative Catholic country!

Torremolinos gives way to Benalmádena, the next town on the coast. The original village of Arroyo de la Miel above the new town still retains some of its Spanish charm and is home to the Hospital de Alta Resolución de Benalmádena. The area closest to the sea has a splendid marina, around which are apartments, shops and restaurants. It also has two aquariums, a casino and amusement park. The average temperature here is warm 19º which would account for the large British community. There are bars and shops which cater to British tastes too, and 20 kilometres of sandy beaches to enjoy.

If you are ready to buy a home in Spain, Property Guides will be at Your Overseas Home. It’s a new style of overseas property show, where those serious about buying can get detailed information and introductions to trusted lawyers, agents and currency providers. With three events planned this spring in London, Manchester and Glasgow, Click here to apply for FREE tickets.

Some 18 kms south lies La Cala de Mijas, and above it the delightful white village of Mijas Pueblo. Data from 2006 shows that there are 113 nationalities resident in the area. Again the British are among the largest number of non-Spaniards. There are five main beaches and 11 golf courses, with La Cala Golf and Country Club being one of the largest in Europe. There is also a modern hospital in Mijas which serves a wide area, including Fuengirola. The village up in the mountains is a typical Andalusian white village with quaint narrow streets and craft shops. Below, in Cala de Mijas, there are many restaurants and shops in the well laid-out streets. 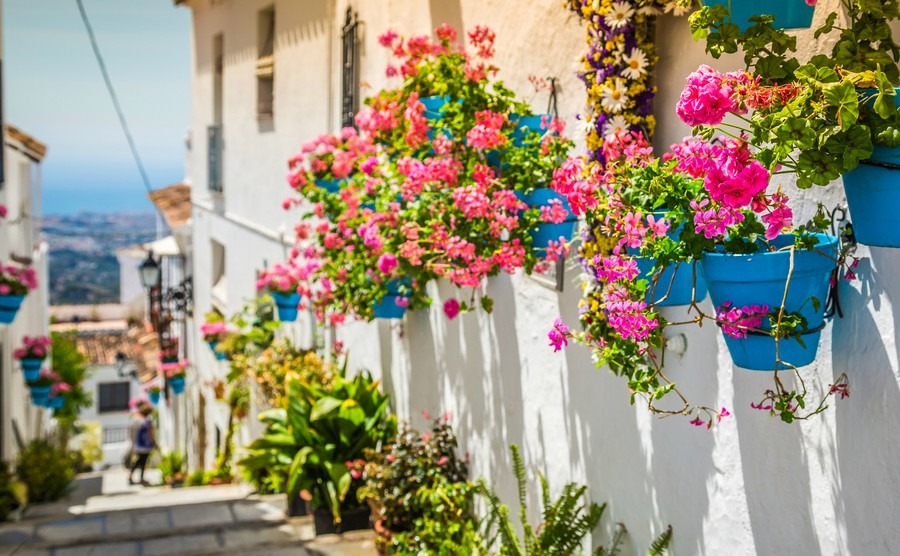 Mijas Pueblo, looking towards the sea

Fuengirola is located below Mijas Pueblo and east of Cala de Mijas. A pleasant seaside town which dates back to the Phoenicians and with an excellent Tuesday market. Today Fuengirola has a large foreign population with the British making up a substantial number. There are seven sandy beaches with calm seas and is a town with plenty of sports on offer – football, skate park, indoor swimming pools and a sailing school.

The next town of notable size and the last on the Costa del Sol is Estepona which boasts 23 kms of coastline. Close to Gibraltar, the airport there is the closest, just a 45-minute drive away. The population is around 70,000 and the largest group of foreigners are once again the British. It’s old town is a lovely place in which to stroll with beautiful streets and a genuine Andalusian feel. Estepona is one of the prettiest towns on this coast. Head here to discover a host of upmarket developments to suit most budgets as well as golf urbanisations.

The demand for new housing is driving the construction of new urbanisations and developments along the coast and in the hills behind. Estepona and Duquesa are two areas where there have been a number of new homes built. Close to Estepona Port is the gated community of Riviera Andaluza which comprises apartments, townhouses and penthouses. There are others in and around the town and perhaps the best known is the luxurious Los Granados del Mar.

The demand for new housing is driving the construction of new urbanisations and developments along the coast and in the hills behind.

Near Marbella, a new development called Los Monteros has apartments for sale from €190,000. Carvajal Views in Fuengirola is offering apartments and penthouses for sale from €290,000. La Mairena Hills development in Ojén near Málaga located in the foothills of the Sierra de las Nieves mountains has 40 spacious apartments starting at €279,000. Apartments in Mijas Costa in the urbanisation called Casa Mijas have a starting price of €211,000. Townhouses in La Cala de Lujo, Mijas, are available from €445,000.

According to the surveying company Tinsa, property prices rose by 2.1% in Andalucía – the autonomous region in which the Costa del Sol is situated – last year.
In Marbella, one-bedroom apartments start at around €125,000 here, houses from €250,000. In Torremolinos, a budget of around €200,000 will be enough to secure a two or three-bedroom apartment on a gated complex. Málaga property prices are expected to increase by 5% in 2018 due to increasing demand. As things stand one-bedroom apartments start at around €120,000, houses at €270,000.

For golfers the Costa del Sol delivers in a big way. Here are five courses that have been attracting British players:

Views towards Gibraltar and across to Morocco on one side, and over to the snowcapped peaks of the Sierra Nevada Mountains on the other, make this one of the stunning locations to tee off on a clear day. It has two fabulous courses: the links course, which slopes down to a golden beach, and the heathland course, part of which meanders through a river valley. 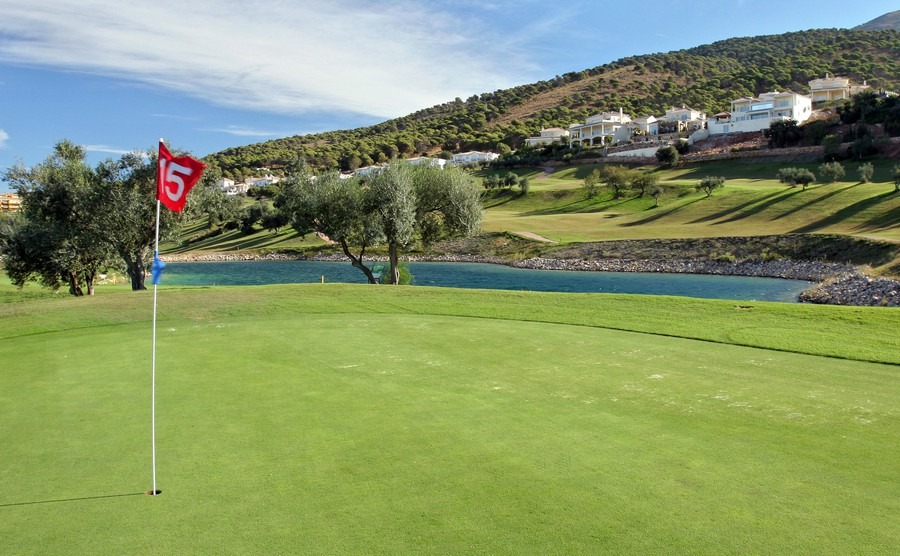 Between Malaga and Marbella, in the mountains above Fuengirola, this course was designed by Seve Ballesteros. It has a reputation as “unforgiving”, but if your short game lets you down at least you can enjoy the views of the Sierra de Mijas hills and the resort’s sauna and spa.

This golf and country club enjoys the prestige of being home of the European PGA. Set against the stunning backdrop of the Sierra Blanca mountains, its two magnificent 18-hole courses – the old and the new courses – are lined with mature eucalyptus trees, cactus and palms and pink and white azaleas that fill the air with an unforgettable and intoxicating scent.

This course is characterised by its wide fairways, large greens and water hazards. It’s a challenge for golfers of all handicaps. The marina and beaches in Caleta de Vélez, however, are just a short walk away.

Perfectly placed elevated tees offer beautiful views of the Mediterranean, Africa and Gibraltar. The course winds around lakes and the Arroyo Del Taraje stream, and each hole features its own type of tree, including pines, olives, cypresses and chestnuts. Finish your round with a delicious meal at the famed La Cantina restaurant.