A morning spent inside the Catalan Institute of Public Safety

There is a strong police presence in Spain. We often see various police forces stationed at roundabouts monitoring and stopping drivers, police patrolling the streets and beaches, police at public events large and small and patrol cars making nightly rounds. Catalonia has its own police force, the Mossos d’Esquadra which protects the 7 million people who live in the region and its own Police Academy, the ISPC (Institut de Seguretat Pública de Catalunya) located near Barcelona.

We were invited to visit the ISPC and see aspects of training and activity that happens in a world where most ordinary citizens don’t go.

The origins of the name Mossos d’Esquadra lie in the oldest police force in the world.

The origins of the name Mossos d’Esquadra lie in the oldest police force in the world, though they are not directly connected. Tradition says that the Mossos were created in 1719 in the city of Valls (Tarragona) and was the first civil armed force dedicated to safety while the Spanish army was engaged in wars around Europe and it was necessary to create a force to guarantee security. From the city of Valls, the Mossos spread throughout Catalonia and became Mossos d’Esquadra or “Lad’s Squad.”

A small security force was formed in Barcelona in 1950 under the name Mossos D’Esquadra but it had limited powers until General Franco’s death and the return of democracy to Spain; a new Mossos was created in 1983 and became a civilian police force. Since then the force has increased its numbers, its responsibilities and skills to make it a thoroughly modern and continually updating model police force.

At the Academy there is a small but very interesting Museum with many exhibits; of particular interest are the uniforms worn in the 1800s and 1900s (which would seem highly impractical nowadays), weapons, and a medical kit used during the Spanish Civil War (1936 – 1939). Visits to the museum are by appointment only. 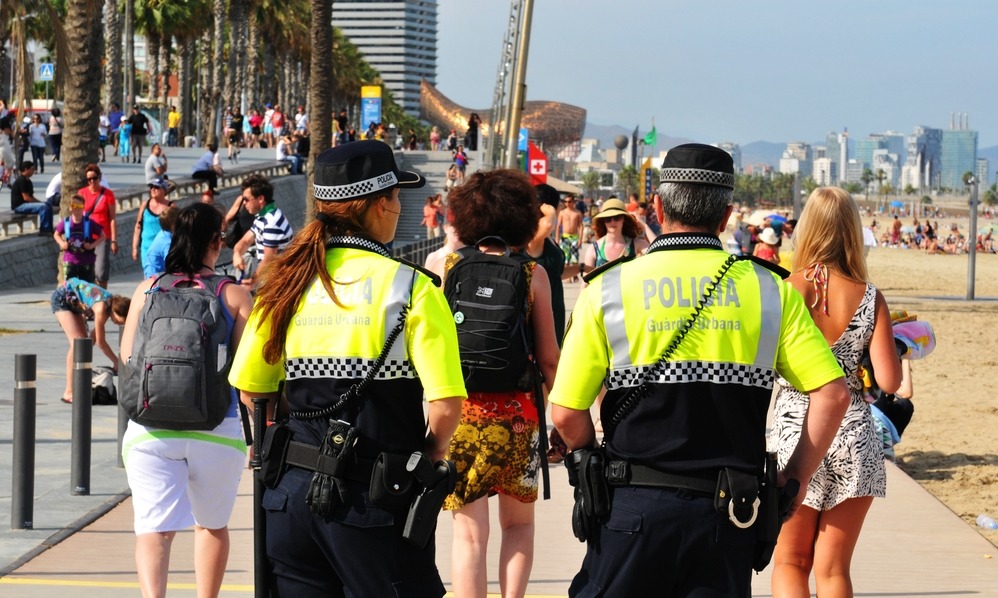 The Academy trains all officers of various police forces in Cataloni.

The Academy and the Olympics

The buildings of the Academy were transformed in 1992 when Barcelona hosted the Olympic Games. An Air Rifle range for Olympic use was constructed on the school’s 17 hectare site, and other buildings were rebuilt or updated. Today it houses the biggest sports pavilion in Catalonia. There is also an auditorium which seats 400 people and makes for an excellent conference area.

The Academy trains all officers of various police forces in Catalonia, as well as fire-fighters. It has a capacity for 4000 students, though currently there are around 200. Many students from Catalonia’s universities studying criminology or related subjects can use the facilities and lectures.

Classes are taught in both Catalan and English. To work as an officer in central Barcelona, a good standard of English is necessary because of the large number of foreign tourists there; most of whom will have some knowledge of English but probably not of Catalan.

Classrooms can hold 40 students but are only used by 25 students at a time and are modern and comfortable with projectors and up to date technical aids.

As early as 1985 women were welcomed into the Mossos and today make up 20% of the force.

There is a very specialised modern library which as well as housing the collection of books and magazines on crime, fire-fighting and general subjects in several languages, provides a large area with banks of computers for research. The library can be visited by appointment and anyone can request information by internet.

Women in the Mossos

As early as 1985 women were welcomed into the Mossos and today make up 20% of the force; incidentally, this is the highest percentage in any police force in the world. They are just some of the 25,000 officers, 17000 mossos and 8000 local police trained at the Academy since 1992.

These days training is continuously evolving. There is an area called boulevard situated below one of the buildings. It is in fact a replica of a town street, with a disco, bank, café, hotel, police station, bus station and shops. It is here that both police officers and fire-fighters simulate real life threats and their response to them. On the ceiling are extremely powerful cameras with very high definition which track each simulated training event; there are also two officers with portable cameras filming to allow a different visual perspective of each exercise. I was able to witness part of one, and could also follow it on the screens linked to the fixed cameras. I have to say it was rather loud, with lots of bangs and the sound of many feet rushing to a trouble spot.

Once the exercise has been filmed, it is linked to a tablet which is set up to give marks to each of the officers involved. Green for good, red for not good. This system was originally designed for FC Barcelona so that the footballers could watch a game in detail and every one of their own moves. That system had poor sound as it wasn’t considered necessary, so it had to be altered for use by the Police School. The result is a high-tech and totally up to date aid to training.

The Mossos and Local Police continue to re-evaluate their fight against crime and terrorism, despite a large budget cut due to the economic crisis in Spain.

Outside there is a motorcycle circuit and an area for fire-fighters to train to rescue people from buildings flattened by earthquakes, but perhaps the most important aspect of this school is the training for dealing with the threat of terrorist extremism which is a worldwide problem. In recent years the tactics used by terrorists have changed and with it the response by police forces. The Mossos and Local Police continue to re-evaluate their fight against crime and terrorism, despite a large budget cut due to the economic crisis in Spain.

It is encouraging to know that this school, no doubt with most others, is training and retraining police officers to do their best for public safety. I’m sure they could do more with a budget increase instead of cuts, but I feel that here in Catalonia the maximum is being done to train officers with all the practical and technical aids available and to protect civilians.

As a postscript to this visit, I should mention a new App for mobile phones which can be used throughout Spain. It is called AlertCop and can be downloaded from Apple or Playstore. It is available both in Spanish and English and once registered you can have personal, quick and direct access to the police to report a crime that has affected you or as a witness to crime. I have it on my mobile, you should also have it if you live here or spend time in Spain.