A Blood Sport or an Art form?

Love it or hate it, bullfighting is deeply imbedded in Spanish culture – although perhaps for not much longer, as the animal rights groups are slowly but surely upsetting this once all pervading so called “sport”.

The followers of the corrida de toros (bullfighting) do not think of this as a bloody sport, but as an art form – and above all, a cultural event. Its origins can be traced as far back as prehistoric times when bull worship was practised widely around the Mediterranean and in Mesopotamia (part of the ancient Middle East). In ancient Greece, particularly in Crete, the bull featured in many paintings (especially the skill of bull leaping), and the Romans sacrificed the sacred bull in places where there were Roman garrisons.

The followers of the corrida de toros (bullfighting) do not think of this as a bloody sport, but as an art form – and above all, a cultural event.

In the arenas of ancient Rome and its colonies, bullfighting was a major form of entertainment: man against beast. Some theories suggest it was brought to Spain during a short period when the Roman Emperor Claudius banned fights between gladiators. In fact the picadors who use long spears to “prepare” bulls for the matadors may originally have been fighters who used the javelin.

Later on in the middle ages, bullfighting was a pastime reserved for the rich and powerful – those who had the means to breed and support training of the bulls and their human opponents. The bull was sent into a closed ring, where a lone warrior on horseback would face it. Probably the most famous bullfighter of the time was El Cid, a Castilian nobleman and military leader. 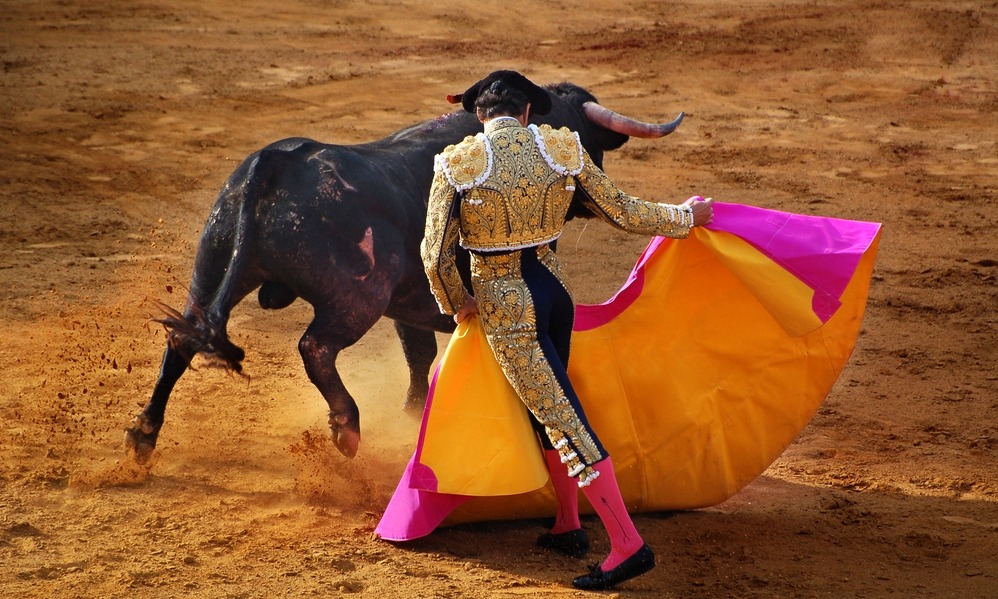 In the early 1700s, it became more common to fight the bull on foot – and this was considered more exciting and resulted in a larger following than fighting on horseback did. This meant that you no longer had to be wealthy to fight a bull, as you did not need a horse which had to be stabled, fed and trained; bullfighting thus became an event in which anyone could participate – which led to the modern form of bullfighting.

General Franco ruled Spain from 1939 until his death in 1975, and was a bullfighting aficionado who actively promoted it throughout the country. He wanted all regional cultures to be set aside, and for Spain to have one unified culture – and saw bullfighting as representative of this. People were encouraged to attend and bullfights were shown regularly on TV. Bullfighters were the heroes of the day, and revered in much the same light as footballers are these days.

The main problem for bullfighting’s adversaries is that it is a profitable business with a turnover of 3.5 billion euro annually.

In 2010, Catalonia banned bullfighting. The imposing bullring in Barcelona became a shopping centre with restaurants on the top floor and a walkway from which to enjoy views across the city. The “sport” is also banned on the Canary Islands, Majorca and other parts of Spain, while the rise of animal rights groups across the country has led to funds from public sources for the training of young matadors to be cancelled. Recent statistics show that just 8% of the population regularly go to the bullrings, although it has been suggested that this is partly down to the economic crisis rather than because the Spanish are turning away from their cultural “sport”.

The main problem for bullfighting’s adversaries is that it is a profitable business with a turnover of 3.5 billion euro annually, and it employs thousands of people = from the farmers who rear the bulls to the trainers of matadors, picadors and toreadors. There is nevertheless a definite change of emphasis, and many local councils now reject the idea that bullfighting should be subsidised from the public purse.

Another nail in the coffin is that a family business which produces special Christmas biscuits under the name El Toro Vega (named after a controversially cruel event when bulls are chased through streets by people with lances) has had to bow to customer demands and change the name. Now they will be called Polvorones el Toro literally meaning “bull dust”.