7 pieces of good news from Spain

Let’s look on the bright side as we start what will be an exciting year for many of us. A year when we might buy a holiday home in Spain or enjoy that long-awaited and planned for retirement in the sun.

The first piece of good news is that Spain’s Covid infection rates are now among the lowest in Europe, at 189 per 100,000 in the past week, compared to the UK’s over 600, with falling fatality rates too.

This is the perfect time to be getting your ducks in a row, ready to buy in the spring or summer. Start the ball rolling by chatting to property lawyers, estate agents and international payments specialists in Spain. We can put you in touch, here.

Of course, new variants could continue to cause problems, but Spain’s vaccination programme is well underway, with some 500,000 people vaccinated so far.

What else is good?

A good time to buy?

Although there was a boost in property purchasing during that brief pause in lockdowns over the summer, overall sales have been lower in 2020. Sales volumes were 7.8% lower in October 2020 than in 2019.

According to Tinsa (who do property valuations) property along the coast saw prices fall by 6.7% in 2020. They say that further falls are possible, maybe adding up to 10% compared to a year ago, although high-end properties have held their prices well.

Madrid and Barcelona have seen price drops too, although that has been viewed by some as a necessary correction to prices that have been inflated for some time. It also perhaps reflects a movement out of the cities now home-working is possible. 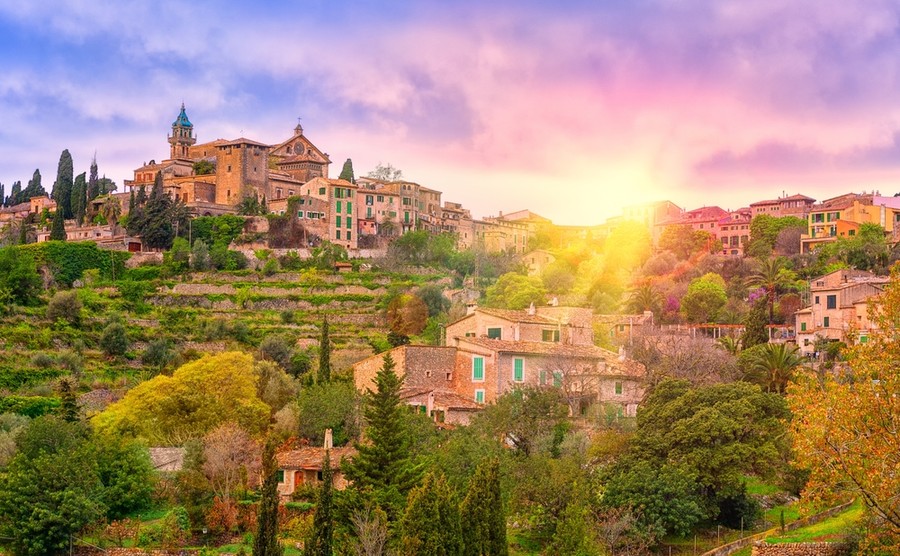 Sunrise over Valdemossa, in Mallorca.

Hence there are some good bargains to be had before the market picks up again, whether on the costas or a city bolthole.

S&P (Standard and Poor) believe that the window of opportunity for property buyers will be just one year – 2021 – as they expect the market to bounce back in 2022.

Brexit will have an effect for a while at least. Of course it is still possible for British people to buy property in Spain – that’s not an EU matter.

For retirees and those aiming to take up residency in Spain, this will be a little more complicated than it was before 31 December. The British were buying homes in Spain long before the UK joined the Common Market and there is no reason why they shouldn’t do so from now on.

While some British banks are withdrawing accounts from customers who live in Europe, Spanish banks are welcoming British clients. Non-residents can open bank accounts in Hola Bank from the UK, without the need to physically visit the branch. It is part of Caixa Bank and you just need a mobile phone. The bank claims an account can be up and running in two days.

Other Spanish banks require a physical presence to open a non-resident account but you can employ a lawyer to do this on your behalf. Many have specialist service for British customers. Have a look at Banco Sabadell and Banco BBVA.

Whoever you open a bank with, you will normally find better service (and a much better rate) if you transfer money to your Spanish accounbt from abroad using a currency specialist. We recommend Smart Currency

The airlines have of course taken a massive hit because of Covid-19. Ryanair have been criticised for their “Vaccines are coming; book now for summer!” campaign, but all must be praying for a boost as soon as vaccines protect more of their passengers.

The budget airlines are lining up to fly their popular routes. According to IATA, the second half of 2021 is expected to see improvements after a difficult first half. Ryanair, Easyjet and Jet 2 will all open up their routes to Spain and travel will become easier.

If you’re preparing to come over to Spain to look at properties this spring, make sure you know what to look for by reading our free guide, Your Viewing Trip.

Industry predictions are for the number of global passengers to grow to 2.8 billion in 2021. That would be one billion more travellers than in 2020, but still 1.7 billion travellers short of 2019 performance.

Spain is preparing to welcome back tourists this summer. Indeed the Minister of Industry, Trade and Tourism, Maria Maroto, is looking at Easter, “when we hope to kickstart the sector’s recovery, which will begin with domestic tourism and, gradually, incorporate tourists from distant markets beginning with our European neighbours.”

Tourism is vital to Spain’s economy but also important to people who have homes in the country and rent them out. Much will depend on how well the vaccination programme is working but tourism accounts for 13.8% of Spain’s GDP, so every effort will be made to welcome foreign tourists to the sunny costas once again.

The hotel and catering industries have suffered throughout 2020. However, they had cause to celebrate late in December at the virtual 2021 Michelin Guide awards for Spain and Portugal, held in Madrid.

234 Spanish restaurants are to be found in the new guide with 11 receiving three stars. The guide also has three new 2-star and 21 new 1-star restaurants. Michelin now includes green stars and these are given for environmental sustainability, with 21 Spanish restaurants now carrying this emblem.

Michelin Guides are the benchmark of high-quality cuisine but you can still enjoy excellent meals in small, local establishments for very reasonable prices. The menú del día, a lunchtime meal usually made up of three courses and including bread and a glass of wine, costs between €11 and €15. What value for money! Do look out for our new Cost of Living survey later this month.

Special occasions might allow you to sample some of Spain’s finest dining at one of the Michelin starred restaurants – there’s probably one not far from your home.

On 1 January Spain brought in a very generous deal for new fathers. They will now have the same amount of paternity leave as new mothers have maternity leave: 16 weeks paid. In fact this makes Spain the leader in Europe.

Spanish researchers are involved in a new programme which, it is hoped, will change breast cancer treatment. Working with researchers from America and South Korea, the Spanish scientists believe that a third of women receiving chemotherapy probably do not need it.

One fifth of 5,083 patients studied worldwide came from Spain and were included in the RxPONDER trials, being followed for five years. The conclusion is that certain post-menopausal patients (to be technical, those with HER2-negative with positive hormone receptors (RH+), with one to three lymph nodes affected) would fare well with just hormone therapy, thus doing away with invasive and unpleasant chemotherapy.

Approximately 8,000 Spanish patients each year would benefit from this treatment. The survival rate of five years was 90%.

This will make a huge difference to patients who find the side effects of chemotherapy almost as bad as the disease itself and represents the first major change in cancer treatment in a quarter of a century. That has to be good news.

See how healthcare in Spain compares with our guide, Healthcare Abroad.

With 2020 behind us, we can look forward to better things for this new year. Much of 2021 will bring back the opportunity to travel, to see friends and family and to enjoy everyday things we have been denied.