5 of the best holiday home locations in Northern Costa Blanca

Costa Blanca has always been a popular destination for holidaymakers and international buyers. With 200 kilometres of coastline, around 320 days of sunshine a year and a wonderful variety of towns and cities, it’s easy to see why. Whether you want to be a short hop from the airport surrounded by fellow internationals or immersed in the midst of traditional Spain, you’ll find what you’re looking for here.

Today, we are focusing on the north of the region with 5 of the best holiday homes locations in Northern Costa Blanca…

Located just south of Valencia, Denia ticks all the boxes for many overseas buyers. This coastal town is lively yet traditional, with authentically Spanish architecture, cuisine and festivals. The food is so great in Denia that is has actually been named a Creative City of Gastronomy by UNESCO thanks to its rich culinary heritage and gastronomic innovation. Along with food, community is also at the heart of the town, with friendly and welcoming locals who are known for their patience with rookie Spanish speakers! 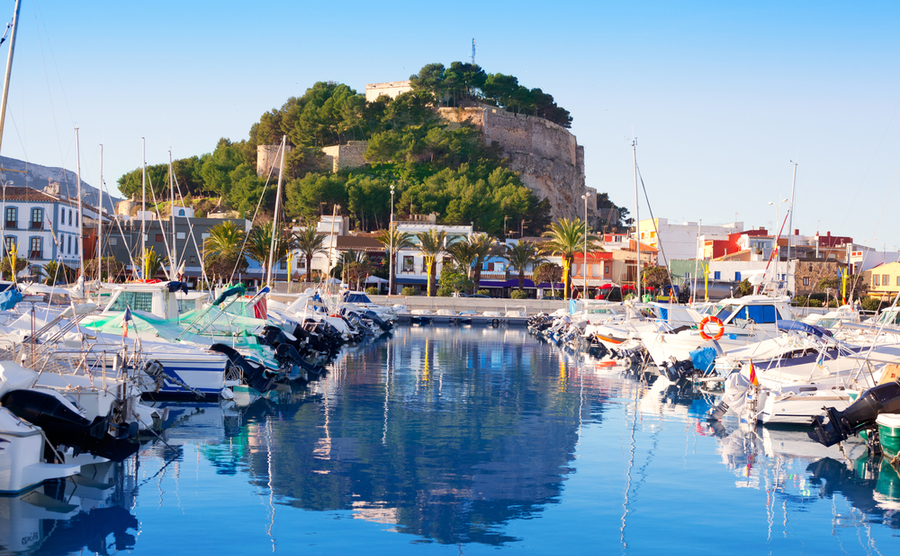 Denia ticks all the boxes for many overseas buyers

Unlike some other beach towns, Denia is ‘open’ and thriving all year round. Locals can enjoy dinner shows at the theatre, live music at restaurants and colourful parades, even in the middle of winter. The town also boasts two glamorous marinas with ferry routes between the mainland and the Balearic Islands.

When it comes to property, Denia is more affordable than similar towns on other Costas like the Costa del Sol. You can find two-bedroom villas starting at €125,000.

Find your new home in Denia on our property portal

Nestled at the foot of the Montgo Mountain, Jávea is a multicultural gem with a pretty marina and quaint old town. Although half of the town’s 20,000 population comes from outside of Spain, Jávea still feels very Spanish with meandering streets and classic whitewashed houses. It is a lovely place to enjoy a peaceful stroll with numerous cafes and restaurants to stop off at along the way.

Jávea has two standout Blue Flag beaches: La Grava and Arenal Bay. La Grava is pebbly and a favourite among the locals whereas Arenal Bay is a livelier white sand beach lined with shops, bars and restaurants. 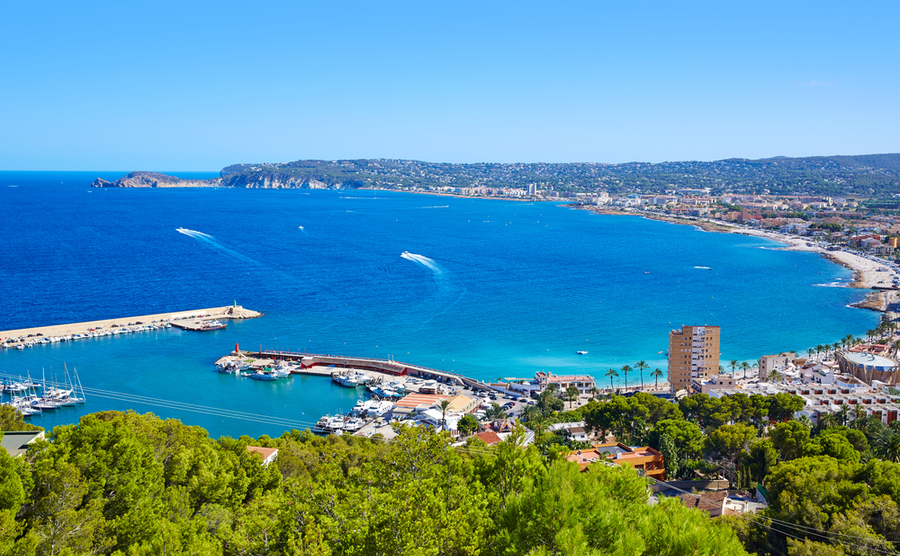 Jávea is a multicultural gem with a pretty marina and quaint old town.

The town is full of life with several nightclubs and cocktail bars. If you’d prefer something a little more low-key, many of the restaurants offer late-night eating accompanied by live flamenco.

There are also four golf courses and two tennis clubs within easy reach of the town for those who like to keep active.

Easily accessible from Alicante airport, Moraira is another great spot for a holiday home on the Costa Blanca. This picturesque old fishing town has beautiful mountain views with a rugged landscape that makes for an interesting trip to the beach. The beaches are both sandy and rocky with fascinating coves to explore and crystal blue waters to cool off in. 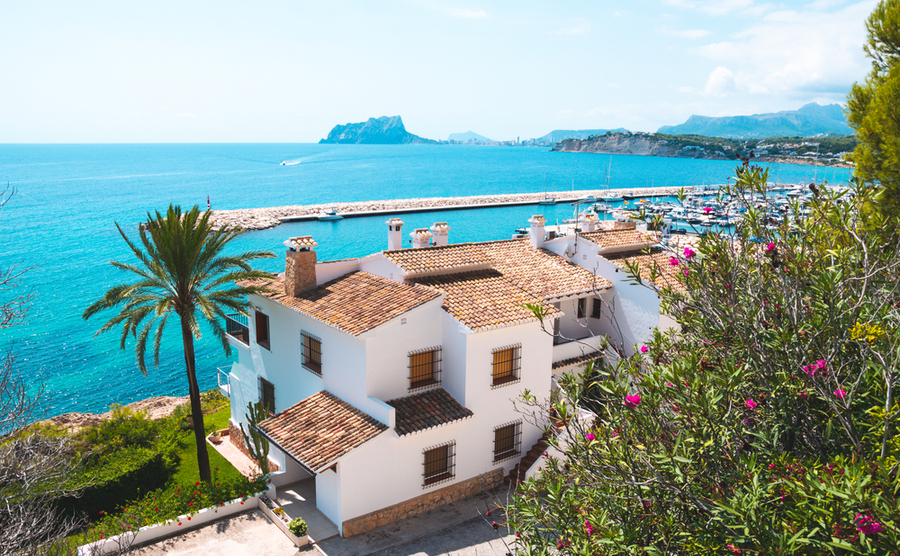 The town may be small, but it has a rather upmarket feel to it with a stylish marina and a yacht club that holds regattas during the summer. As well as this, Moraira has one of the main fish markets on the Costa Blanca.

Property there mainly consists of charming, whitewashed villas that enjoy breathtaking views out to sea – the sunsets in Moraira are some of the best! You can find two-bedroom villas from around €150,000.

Search for homes in Moraira on our property portal

“Miami of the Mediterranean?” That’s what they’re calling Benidorm in the week that they finially finished the famous Intempo building, the tallest residential building in the EU, 47 storeys of stunning sea views.

One of the most popular choices for British holidaymakers, Benidorm would particularly suit those looking for a lively area with plenty of sunshine, entertainment, and other expats! Under 40 minutes from Alicante airport, Benidorm is extremely well connected to the UK with regular low-cost flights from most major airports.

The town caters extremely well to older people too with a long and flat promenade, easily accessible sandy beaches and a car-free town centre. 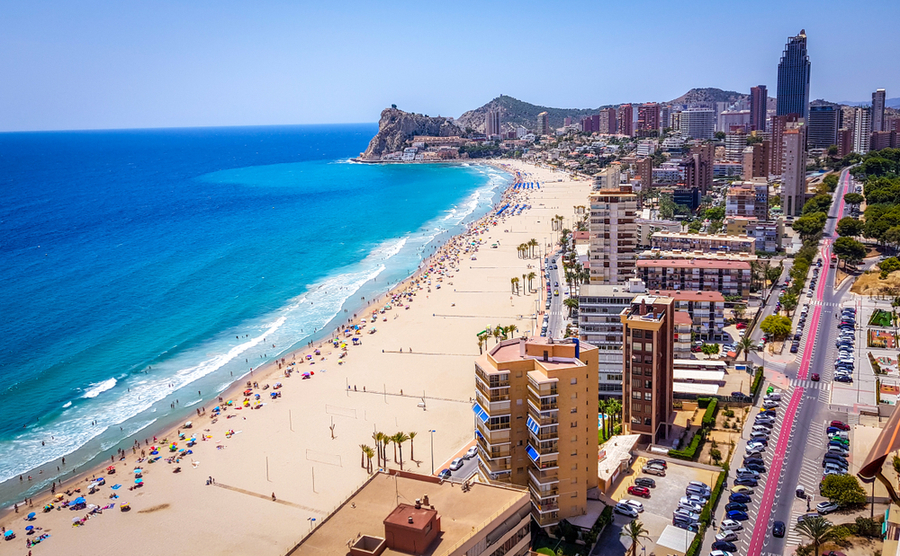 Being so close to Alicante, there are regular organised day trips to the city for those seeking a taste of more ‘traditional’ Spain. Benidorm is also close enough for day trips to the beautiful city of Valencia.

Nonetheless, Benidorm itself features some interesting architecture and points of interest. These include Plaza Mayor Square, Church of San Jaime and Santa Ana and Aiguera Park.

Another factor that draws many to buy in Benidorm is the fantastic rental potential. If you’re considering renting out your holiday home when you’re not there, you would have no problem finding guests!

With a plethora of high-rise buildings, urbanisations and villas you should have no trouble finding a property in Benidorm within your budget. One-bedroom apartments close to the Old Town start from just over €50,000 and villas from under €200,000.

Browse all our homes in Benidorm here

Fondly nicknamed the ‘Santorini of Spain’ Altea offers a rather different vibe than nearby Benidorm and the other big-name coastal resorts on the Costa Blanca. The city is a popular getaway destination for people living in Madrid thanks to its slow and laid-back lifestyle. 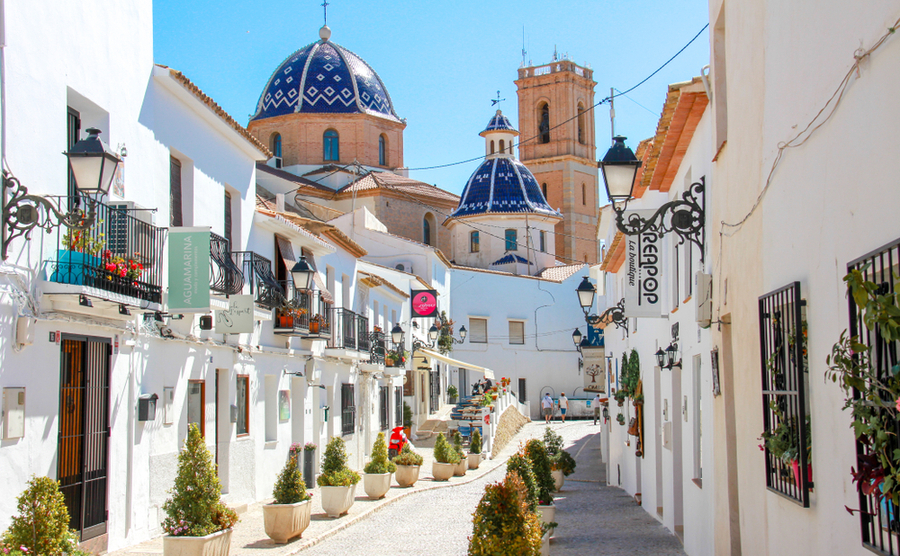 There is a great selection of sand and shingle beaches, secluded coves and seafront tapas bars and restaurants. The Moorish city really is a sight to behold with impressive navy-domed landmarks found amongst pretty whitewashed buildings.

Altea is also home to one of the most bustling and vibrant street markets on the Costa Blanca. Held every Tuesday, you will find everything from fruit and veg to clothing and jewellery.

Property in Altea is slightly more expensive than in neighbouring Benidorm, however, you can find lovely apartments with access to a swimming pool from around €115,000. Check out our Altea property listings, and see what €4.5million buys you compared to €70,000. (Actually, the €70,000 one is really nice!)

Bethany is the resident copywriter for Property Guides, producing regular news, articles and guides. She is an expert in Spain and Spanish property having owned a property in Mazarrón in the Costa Cálida since 2003. She offers great, personal advice on buying property abroad. Publications written for include Rightmove, Care Home Management Magazine, What's New in Publishing, Luxury Advisor and Property Press. She has also been featured in the Daily Express.