If you’re dreaming of that perfect beachfront pad, you might be surprised to know how affordable it could be – as long as you know where to look. This week, I’m discovering some of the Mediterranean’s top spots to buy a seafront home without breaking the bank, whether you want a traditional fishing village or a bustling resort.

Love to buy in the sun but don’t have quite enough money? Check out some innovative financing options, including equity release and mortgages, in Spain, France, Portugal, Italy, USA, Canada and other countries, in our new guides, How to Pay for a Property Abroad.

Cyprus’s year-round sunshine, friendly communities and historical ties with Britain mean it will always be a favourite with Brits in search of the idyllic Med lifestyle. A recent resurgence in interest from foreign businesses and investors has triggered a number of prime new-build developments on the island, including large projects, such as the new Limassol Marina development. 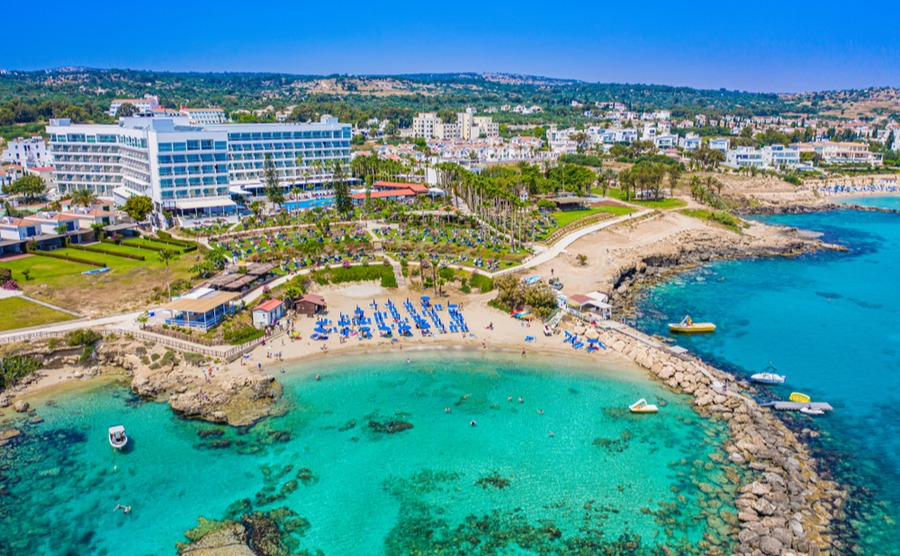 Paralimni is a great place to look for affordable beachfront homes in Cyprus.

The western area of Paphos is an established hot spot with UK buyers, but head to the Cypriot section of the eastern Famagusta district for some great deals on beach pads. Paralimni is 10 minutes inland from some glorious beaches, and has a wide choice of apartments in the €50,000-€100,000 bracket. In the nearby resort of Kapparis, €80,000-€120,000 will get you an apartment within walking distance of the beach and strip.

Home to the Mediterranean’s fourth largest cruise port, one of Turkey’s largest marinas, water parks and lots of water-based activities, Kusadasi is a popular beach resort that packs a lot of fun into a small corner of the Aegean coastline.

Away from the main strip and its famous Ladies Beach, the resort is growing too, with up-and-coming districts like Degirmendere offering some great value new-build apartments, still within walking distance of the beach. New two- three-bedroom apartments are available from around €60,000. 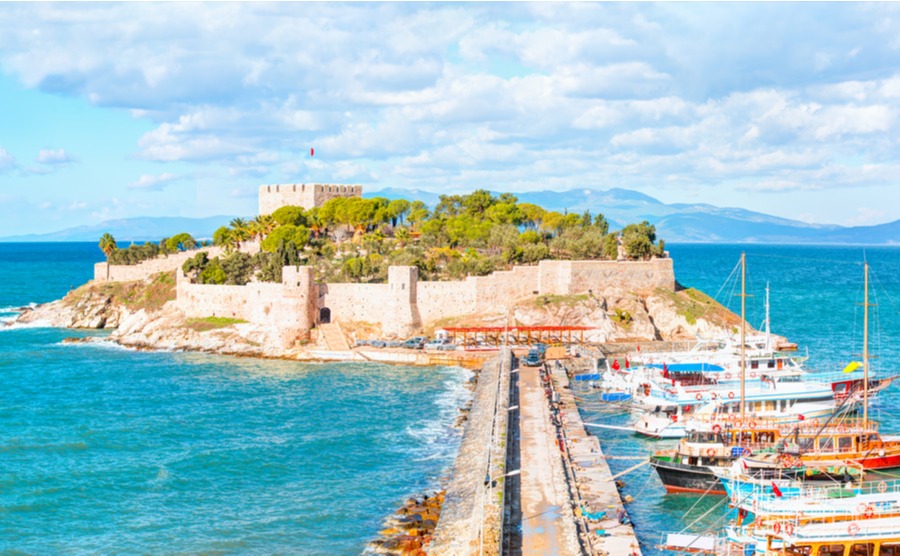 Meanwhile, for a more peaceful, traditional setting that’s still within 15-20 minutes’ drive of the bright lights of Kusadasi, try Davutlar. This village, nestled amongst fruit and olive groves, and near the unspoilt beaches of the Dilek Peninsula, is famous for its thermal springs, natural scenery and clean air. New semi-detached villas are popular there, with prices from around €100,000.

Reaching the Kusadasi is easy, thanks to Izmir Airport being just an hour’s drive away and Bodrum Airport an hour and 45 minutes. Meanwhile, there are regular ferries to the Greek islands of Samos and Patmos.

The Fethiye area’s appeal is its stunning landscape, including the famous Ölüdeniz lagoon, its friendly harbour town and affordable property to suit all types of buyer. The beating heart of the region is Fethiye town, a year-round community where the lifestyle caters both for expats and local Turks.

Less hectic are the small communities and villages a short drive or bus ride along the pine-clad coastline either side of Fethiye. The best known include Hisaronü, Ölüdeniz, Üzümlü and Çiftlik, where new villas or self-build plots are equally as popular as apartments. 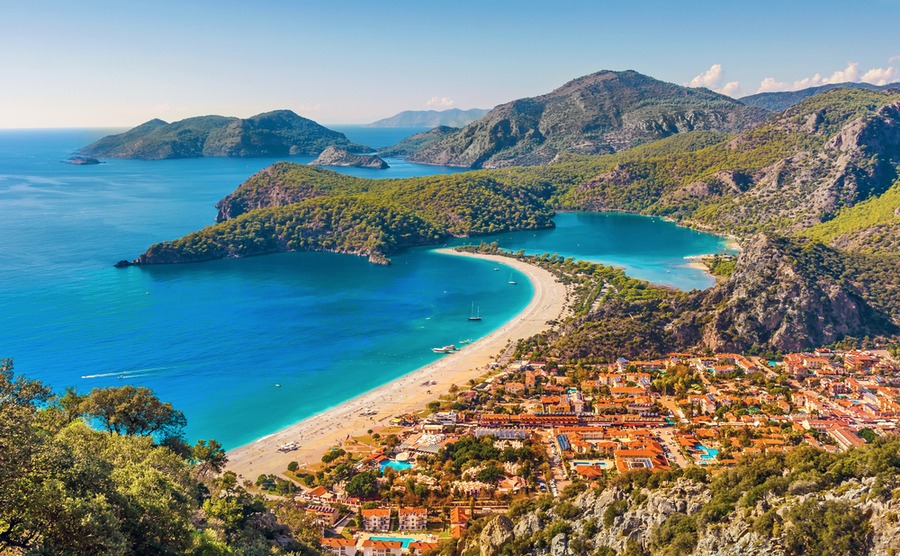 Back in Fethiye resort, one beach district especially popular with British buyers, thanks largely to its location and great value is Çalis. Flat and often with a cooling breeze, Çalis offers the opportunity to own a property within ten minutes’ walk of a sandy beach, bars and restaurants, shops and supermarkets. Otherwise, Fethiye’s town-centre is a short 10 to 15-minute bus ride, or a hearty stroll or bike ride along the newly upgraded promenade. Meanwhile, it’s just 50 minutes from Dalaman Airport, 25 minutes from the famous Ölüdeniz lagoon and 30 minutes from the upmarket marina resort of Göcek. Çalis has a large choice of two and three-bedroom apartments priced between €50,000 and €100,000.

At the foot of the White Mountains, where lush green countryside meets an unspoilt stretch of Mediterranean coastline, the Apokoronas area of north-west Crete, in Greece, is an unspoilt gem.

Conveniently located between the larger towns of Chania and Rethymnon, the area is ideal for those who are just as happy in a small village a few kilometres from one of the picture-postcard beaches as they are front-line to the sea. Strict building regulations mean there are very few high-rise buildings along Crete’s shores, so being a mile or two inland means you should still get lovely views of the Med. 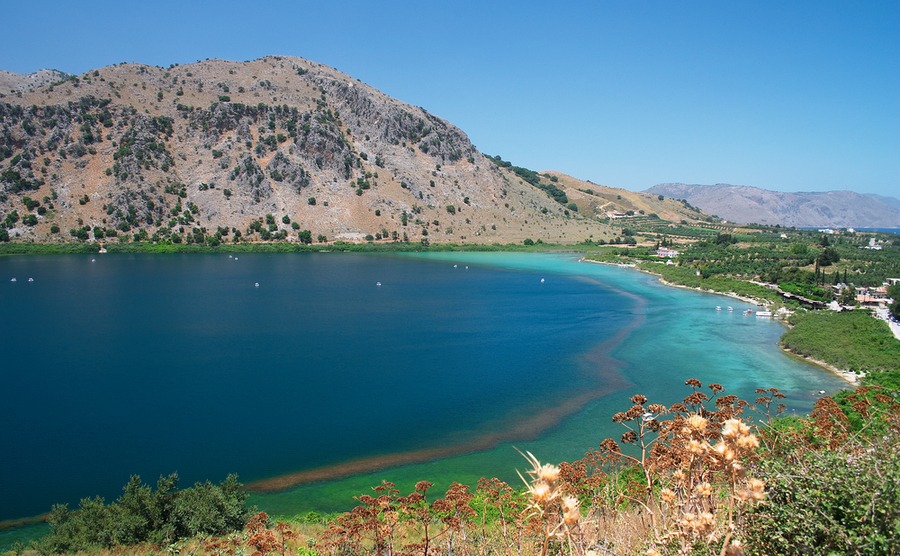 Apokoronas is one of the most beautiful parts of an already beautiful island!

Typical properties include small modern villas and apartments in small blocks on the edge of villages, or more adventurous buyers could opt for a traditional village house. Inland, apartments and small houses are available for €60,000-€120,000, depending on condition and location. Expect to pay from €200,000 for a larger villa by the beach.

It’s not just Greece’s famous islands where you can tap into an idyllic Mama Mia Mediterranean lifestyle and enjoy glorious beaches. The coast along its mainland is equally dazzling and typically cheaper to buy property too. Gaining popularity is the Peloponnese peninsula, which mixes wild, verdant mountains with sweet, Greek fishing villages and unspoilt beaches. 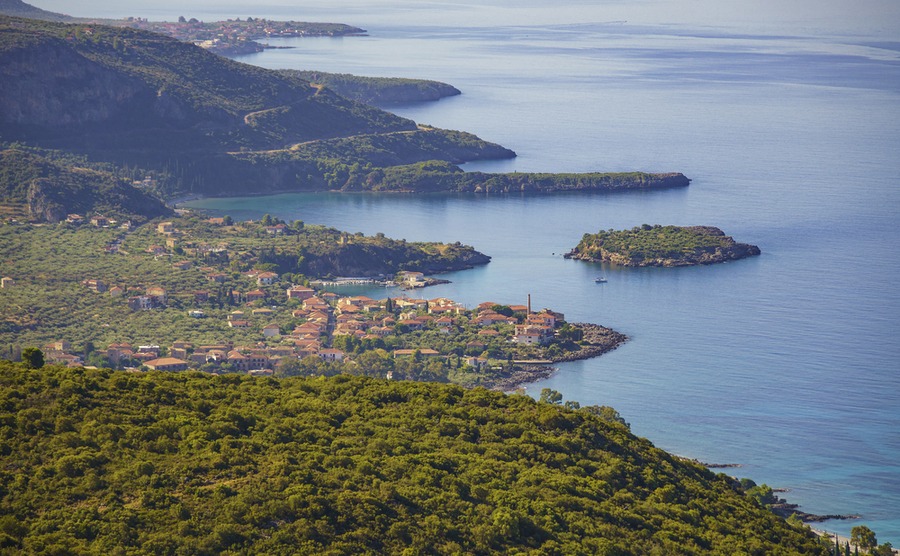 Stoupa is a fantastic part of the Peloponnese to buy a seafront home.

Stoupa is one of the best-known spots there. A pretty, low-rise beach resort on the Mani peninsula, it’s set around a bay 10 minutes’ walk from the old village of Lefktron. There are two beaches, both pebbly, but a short walk around a headland is Kalogria beach, popular for its golden sand. Other desirable Peloponnese locations include Finikounda, Kardamyli and Chrani. As well as neo-classical Gythion, with its pretty harbour and fish restaurants, and Pylos and Methoni both swimming in splendid beaches and historic sites. Small stone villas can be yours for €120,000-€200,000, while traditional villages houses can be picked up for less than €100,000.

Kalamata Airport, a 45-minute drive from Stoupa, has UK flights, or Athens, with year-round flights, is around three to three-and-a-half hours’ drive.

Too often overlooked for the better-known regions of Italy above and below it, Abruzzo is rustic unspoilt region halfway down the ‘boot’. One of its highlights is the 130-kilometre coastline, made all the more attractive by the mountainous back-drop.

Teramo is a favourite among Italians for holiday homes. ValerioMei / Shutterstock.com

Amongst Italians, the coastline of the Teramo area is already a popular place to own a holiday home. Of particular note there are the ‘seven sisters’ beach resorts, known for their pristine waters, family entertainment and fish restaurants. The resorts, each with a charming traditional feel but slightly different in terms of size and amenities, are Martinsicuro, Alba Adriatico, Tortoreto, Giulianova, Roseto degli Abruzzo, Pineto and Silvi Marina. Budget €100,000-€150,000 for a two-bedroom apartment within walking distance of the beach, or upwards of €250,000 for a villa. 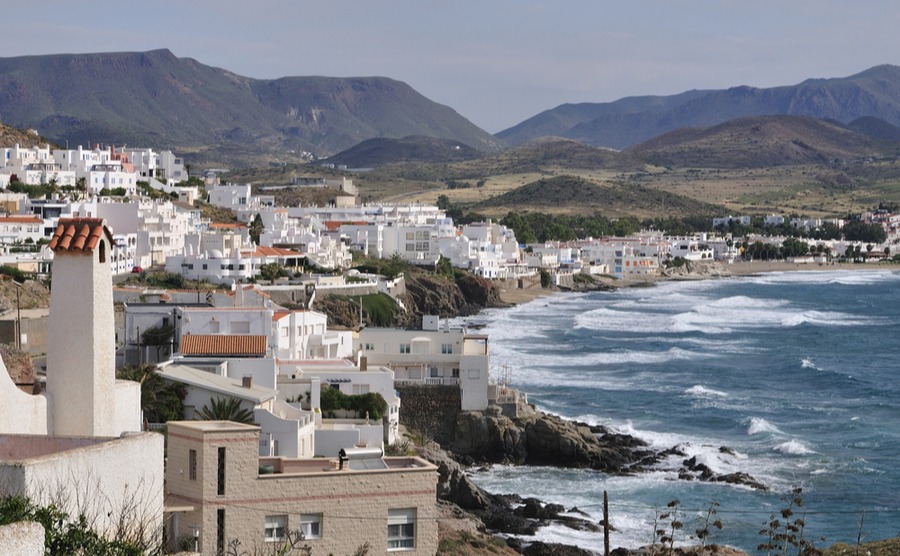 The city of Almería is the second warmest in Europe (behind Seville), while the coast nearby enjoys 3,000 hours of sunshine a year. That’s around twice as many as most parts of the UK. Almería was one of the last parts of Spain’s Mediterranean coasts to see the arrival of large-scale tourism and there are plenty of unspoilt beaches. Local people tend to favour Pulpí, and there are great options for naturist swimmers too, especially around Vera. Almería, and towns like Mojácar, has that slightly quirky, alternative feel, not least because property is less expensive.

If you need to raise the money to buy in Spain, read our brand new guide, How to pay for a Spanish property.

Being so far south and so warm – parts of Almeria are technically Europe’s only desert – you can swim all winter. Having said that, you won’t find many locals doing so. Sea temperatures go down to around 15C in the depths of winter – similar to the coast off Brighton in summer!

Unlike many other Mediterranean coasts in winter, you can get here in winter quite easily. Almería has an airport itself, or you can fly into Málaga or the new Murcia-San Javier (Corvera) Airport to the north of Almería. Driving takes around 20 hours from France’s Channel ports, or the train via Paris takes around 17.5 hours.

Popular places to buy include Mojacár, San Juan de los Terreros, Villaricos, Garrucha and Roquetas de Mar. Property is available inland from around €50,000, and from a little more on the coasts.

Historically favoured by holidaying Portuguese families, the Eastern Algarve is both cheaper and more traditional than the international resorts in the central and western Algarve. But it still benefits from the region’s balmy climate, easy access (via Faro airport) and gorgeous sandy beaches. It’s less developed too with minimal high-rise buildings, thanks largely to the Ria Formosa natural reserve, which attracts strict building regulations, occupying a large part of it. 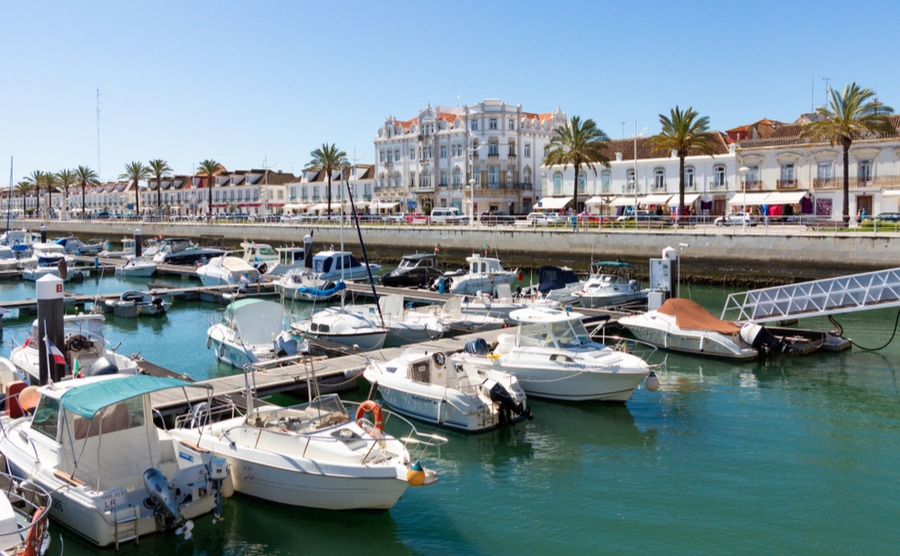 Areas to explore include the traditional white town of Vila Real de Santo António, located on the banks of the Guadiana river. Next door is the more touristy Monte Gordo beach resort with a collection of complexes, while further west is the old town of Vila Nova de Cacela, adjoined to the sweet resort of Manta Rota, with 22 kilometres of direct access to Blue Flag beaches. Two charming fishing villages near the large town of Tavira are Cabanas and Santa Luzia, followed by equally appealing Fuseta.

Villas located five-10 minutes from the sea are popular around there, with prices starting from around €300,000. Budget from around €130,000 for a two-bedroom apartment next to the beach, or from €250,000 for a townhouse. Prices fall if you head a few kilometres inland.