Where to buy a home in America’s mountains

America has fallen in love with its mountains! Property prices have been shooting up as people leave the cities for some beautiful outdoor space. Could you join them, and buy a home in America’s mountains?

In the gap year after my A levels I hitchhiked around the USA – kids, you could do that kind of thing in 1983 – and when I ran out of money a week before my flight home, I trekked into the Appalachians in Pennsylvania and slept in a cabin.

After a couple of nights, when I was starting to feel a little lonely, I started chatting to a woman walking her dog, and she invited me to stay with her. That sort of hospitality is normal in rural America. And that’s when I fell in love with America. Especially the wilder, rockier, more mountainous bits. Since then I have travelled America’s mountains, from the snow-capped peaks above Palm Springs, just a cable-car ride from the palm trees and desert, via the ski resorts of Lake Tahoe to the Rockies.

It would certainly be my choice of a US home.

I’m not alone either, as since the pandemic struck, country homes have risen by as much as 35%. 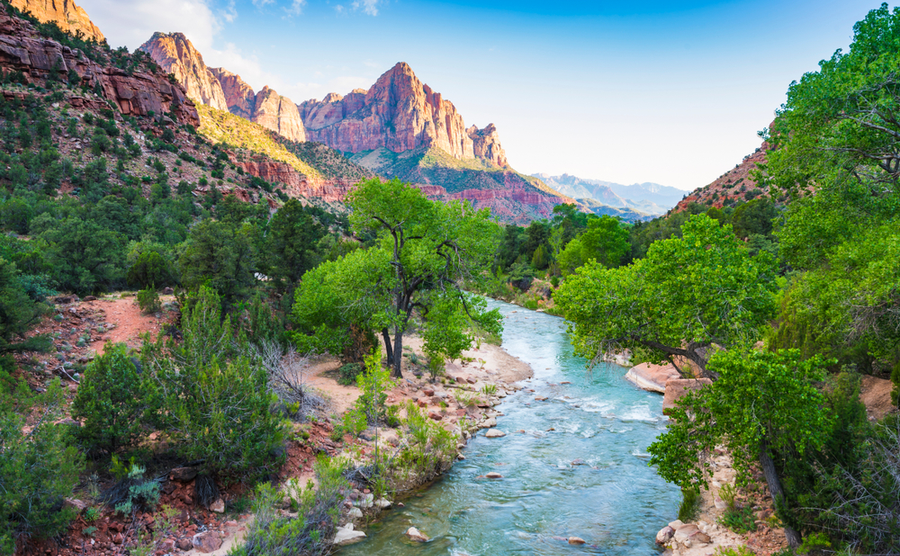 Zion National Park, in the Rockies

What to do in America’s mountains

For those worried about the distance from the sea there are plenty of other activities to enjoy from a home in America’s mountains. That includes everything from white-water rafting or the more sedate ‘tubing’ down the rivers, to skiing, hiking, fishing, wildlife watching, climbing, paragliding or just enjoying the view.

There are also great mountain ranges within striking distance of the sea, including California’s Sierra Nevada (see below).

The Waltons was set on the fictional Walton’s Mountain in the very real Jefferson County, Virginia. Country areas from the Sierra Nevada to the Appalachians do pride themselves on their traditional values. While you will find backwoods areas with old-fashioned attitudes, rural towns are also brimming with culture, events, great colleges, classy restaurants and roadside diners, huge shopping malls and amazing independent shops too.

They may be a little more traditional than New York City or San Francisco, but you will find a warm welcome and an incredibly exciting lifestyle.

What type of home

Traditionally, a home in America’s mountains would be made of local materials, especially stone and timber, due to the transport costs. Hence you had homes that looked like they had grown organically from the earth, as if made by the pioneers who first arrived 150 years ago. Many would have a classic A-frame to protect them from heavy snowfall.

However, with that sturdiness tending to feel heavy and a little kitschy, with moose heads on the wall and bear rugs on the floors, modern mountain architecture is a lot lighter. The idea is that to enjoy the glory of the outdoors more, it’s sensible to keep your home to clear lines, colours and textures.

A modern home in America’s mountains will take advantage of all the natural light possible, with big windows to enjoy the views. 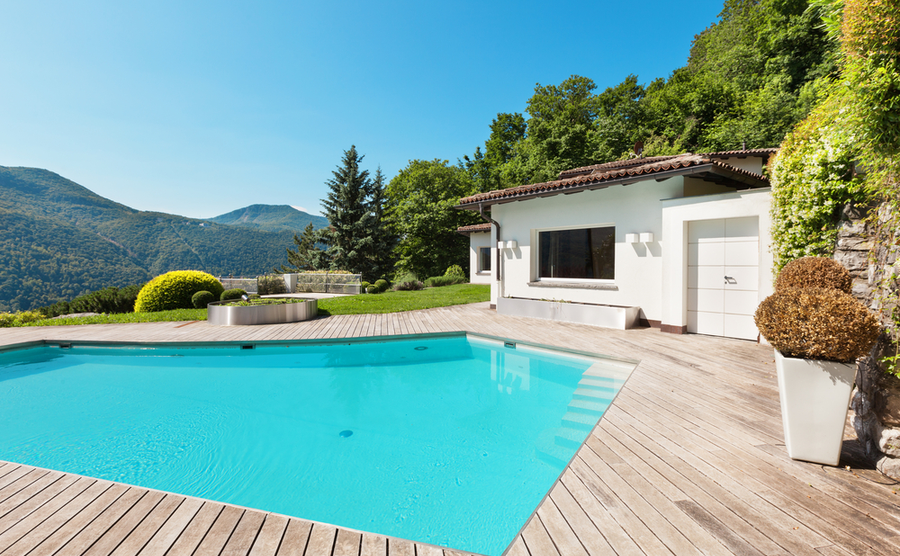 A modern home in the mountains

You can still take advantage of local materials, with stone and wood used to maximum effect indoors, in kitchens and living rooms.

The outdoors can be as important as the indoors, so look for retractable windows to bring the outside in, plus classy landscaping, maybe a hot tub… Just beware the local wildlife, with bear-proof bins and strong fences.

So, where should you buy? 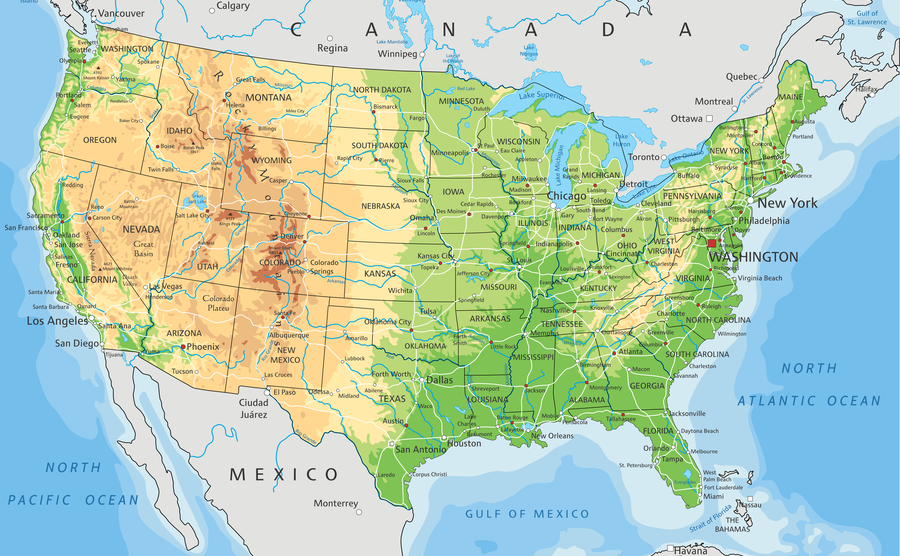 The Appalachian Mountains stretch for 1,500 miles of the eastern USA, all the way from Maine in the north to Alabama in the south. Along the way they take in such evocative names as the Blue Ridge Mountains of Virginia, Shenandoah, the Catskill Mountains, Poconos and the Adirondacks.

For skiers, there are some excellent resorts, including Lake Placid, in the Adirondacks, Sunday River and Sugarloaf in Maine and Killington in Vermont. The resorts are generally lower than European ski resorts, but winters in the USA do tend to be colder.

With 1,500 miles to choose from – twice the distance from northern Scotland to southern England – you have a wide choice of where to live. One newspaper in the Blue Ridge area tried to find the happiest town according to such data as low cost of living, high earnings, short commutes and low crime rate and found that among the cities, Asheville NC and then Roanoke and Harrisonburg in Virginia, scored highest. 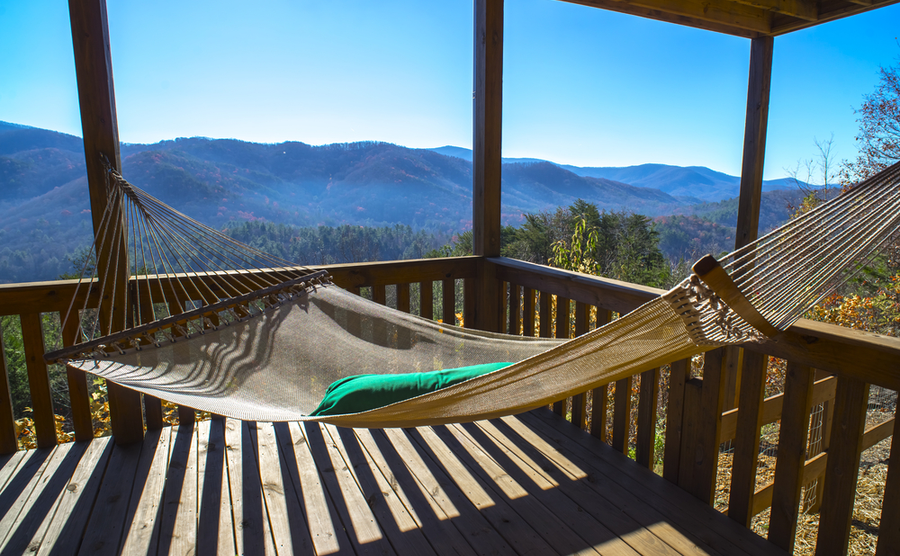 A home with a view of the Blue Ridge Mountains

Of the smaller towns, below 10,000, Lewisburg (West Virginia), Blowing Rock (North Carolina) and Floyd (Virginia) were especially happy. Commenters praised the autumn colours, the quiet and relaxed ambience and the friendly people: “Everyone you meet in Floyd acts like they are cousins from way back – there are no strangers!”

Other than these, among the larger connurbations, Hickory in North Carolina, among the foothills of the Blue Ridge Mountains, comes highly recommended, not least for its low cost of living.

Read Bill Bryson’s A Walk in the Woods for an amusing take on the 1,500 mile Appalachian Trail and the people and places along its route.

The Rockies stretch some 1,900 miles through the middle of the USA from the north of Canada to the border with Mexico.

It includes 100 mountains of over 4,000 metres – most of them in Colorado – so no surprise that the skiing is sensational. In the Rockies you’ll find the resorts if Vail, Telluride, Breckenridge, Big Sky, Aspen and Jackson Hole. 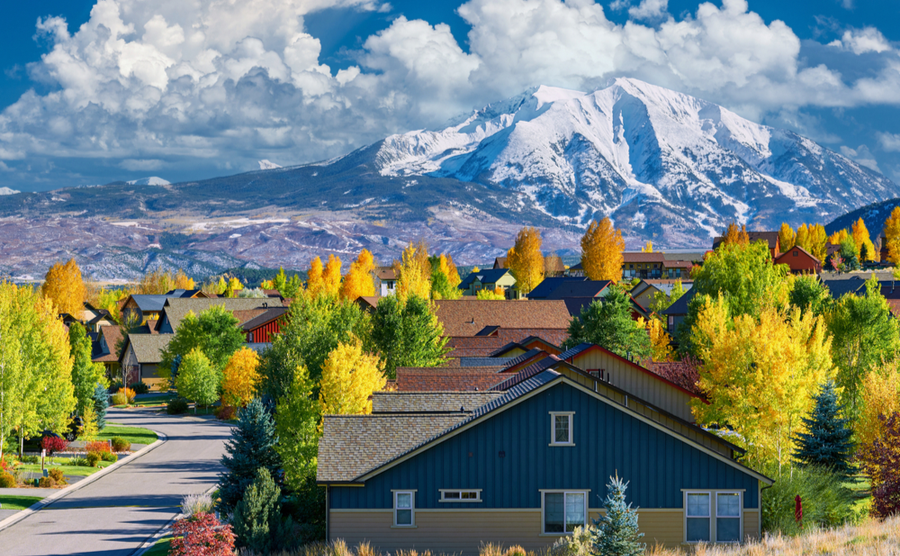 The neighbourhood in Colorado, with Mount Sopris

The foothills of the Rockies are also classic cowboy country – home to states like Montana and Wyoming. Monument Valley is between Arizona and Utah, the Grand Teton National Park near Jackson Hole was used in the movies Shane and Django Unchained. Butch Cassidy and The Sundance Kid leapt into the canyon in Zion National Park, Utah.

Where to buy a home in the Rockies

Again, this is a vast area and small towns are friendly and welcoming. Here are a few that stand out. Steamboat Springs in Colorado is just a three-hour drive from Denver and, as well as great skiing, there are hot springs and spas.

Jackson Hole may be well known as a ski resort, but it’s a lovely town to live in year round, with a population of over 10,000.

Among the larger cities, Fort Collins in Colorado is expanding rapidly as people move to the countryside. It’s close to the Rocky Mountain National Park and the median price of a home is just under $350,000.

A good-sized city of over 700,000 people, Boise Idaho has peaks looming over it and you can easily hike or cycle out from the city. The average property price here is just $220,000, yet locals say that the quality of life is one of the best in the country.

The Sierra Nevada stretches down the West Coast of the USA, mainly within the state of California. It’s around 400 miles long and 65 miles wide, forming the spine of the USA.

Altough in recent years the news always seems to be bad, with drought and forest fires, it remains a highly popular place to call home.

Highlights include three Nationa Parks: Yosemite, Sequoia and Kings Canyon. The mountain range includes lakes, including the famous Lake Tahoe, sensational skiing options and even desert. It has the largest trees in the world – General Sherman – as well as the oldest – the bristlecone pines which are as much 4,800 years old.

As the snow melts it gives rise to some sensational waterfalls too, including the 640metre Horsetail Falls in Yosemite.

Where to live in the Sierra Nevada

While some communities are best in winter, Tahoe City, on the western side of the lake, is fun all year round. As well as loads of cultural events, the shops and restaurants are top class, including the Autumn Food and Wine Festival.

For skiing, the resorts of Sqaw Valley and Granlibakken are nearby.

Property here isn’t cheap, at around $1.25m on average, boosted by its proximity to San Francisco, just three hours away. No surprise then, that prices have shot up by around 28% over the past year, according to Zillow, as Caifornians bail out of the coastal cities to work from home in this wonderful setting.

Known for its mountain adventure activities, Mammoth Lakes is around a five hour drive from LA and a little more from San Francisco. 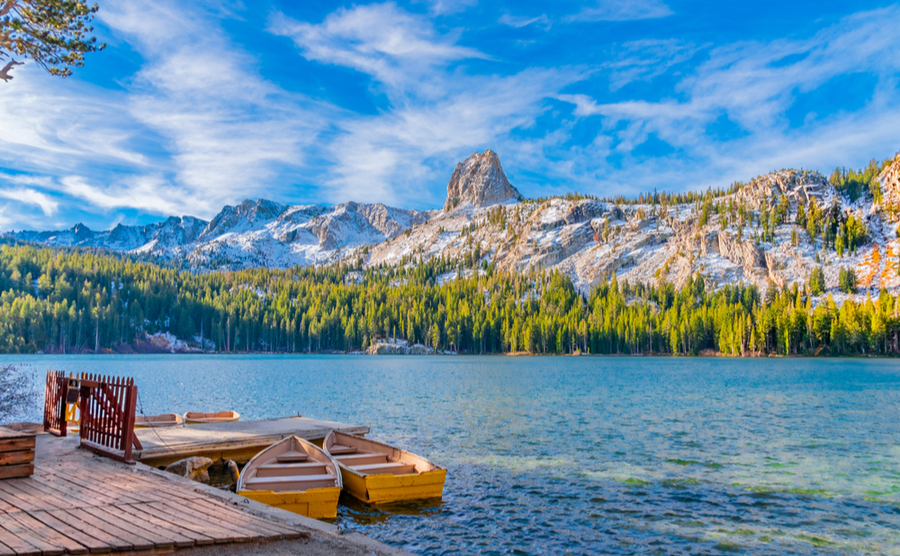 Its ski season is LONG, running from November all the way to July, but in summer the skis and snowboards are simply replaced by mountain bikes. The best thing is, the lifts are still in operation, so it can be downhill all the way.