Property prices in the US continued to leap ahead during the summer at a rate of 18.5%, according to the latest quarterly report from the Federal Housing Finance Agency (FHFA). But where are they rising fastest, and why?

Last week’s FHFA report on US house prices in the third quarter of 2021 has shown an increase of 18.5% nationally over the year to September 2021, and a rise of 4.2% between July and September.

Particular hotspots were the inland western states if Idaho, Utah, Arizona and Montana, which all showed rises of between 35% and 26%. It may be no coincidence that this area is designated by the FHFA the “Mountain” division, with the pandemic leading people out of the cities and twaords the wide-open spaces to work from home. 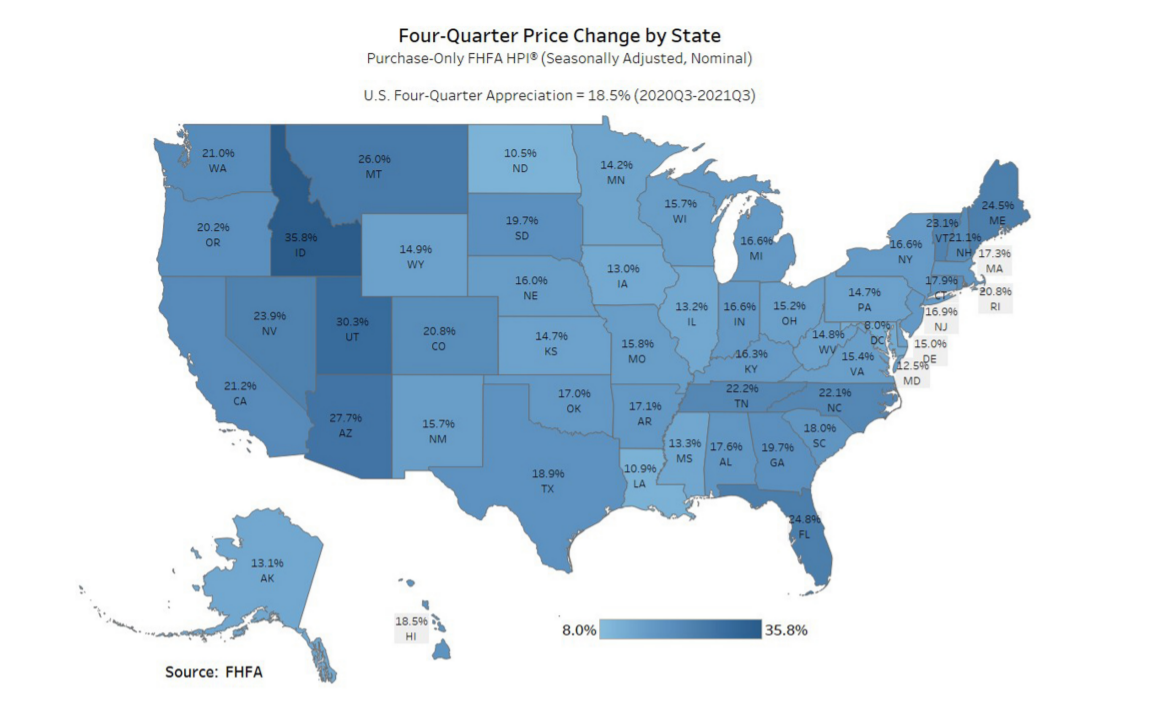 Not far behind was Florida, with price increases of 25%. Within Florida, the fastest-rising metropolitan districts were Cape Coral-Fort Myers on 35%, North Port-Sarasota-Bradenton on 26%, Jacksonville on 23% and Fort Lauderdale-Pompano Beach- Sunrise, on 22%.

Buyers in the Orlando-Kissimmee-Sanford area will be paying 20% more than last year.

Lest Florida buyers think they’re seeing a bubble, however, the sunshine state is nowhere near the top of the leader table for five-year growth. Florida prices are 67% higher than 2016. Plenty of other states have seen higher price rises, including Idaho (119%), Utah (88%) and Arizona (80%).

According to the Florida Realtors, the reason for the rise is pure supply and demand, with the supply of single family homes at 30% less than a year ago and condominiums and townhouses 54% lower. Thre avaerae Florida singlefamily nhome is now jear;y $360,000 and and for condos/townhouses to $260,000.

Erica Plemmons, economist and the director of housing statistics at Florida Realtors, said the boom in 2020 had continued due to other factors too: “including record low mortgages, changes in consumers housing preferences and the demand pressure from continued movement of millennials into their prime home buying years here in the second half of 2021.”

The FHFA house price report has covered the prices of single-family homes across the country and in 400 American cities since the 1970s. Due to its longevity it has been able to measure repeat purchases and mortgages of the same property since 1975, offering a unique analytical tool.