A $200,000 American home is £20,000 cheaper than this time last year just due to currency movements. Prices are rising steadily though, and not just in the usual places. So this year, maybe give San Francisco and New York a miss and head down to Tennessee or over to Ohio?

If you’re hoping to invest in US property, 2018 might be the perfect time to do so. The Federal Home Loan Mortgage Corporation, also known as the Freddie Mac, has released its outlook for 2018. It says that the economic environment for mortgage and housing markets is likely to stay stable for a few years due to employment growth, low mortgage interest rates and moderate economic growth. It found that prices are rising by around 4.5%.

Basing its analysis on the Case-Schiller index, the newly released Global Property Guide investment report makes the point that prices are rising at a sustainable level of nearly 4% in the year to October 2017, accelerating from 3.61% the year before.

Prices are rising at a sustainable level of nearly 4% in the year to October 2017, accelerating from 3.61% the year before.

Locations like New York, San Francisco and LA may be the first locations that spring to mind, but in terms of investment it can pay to cast your net further afield. Property buyers whose most important criteria are investment returns rather than access to Disney World or Broadway should be looking for locations with low property taxes, a strong employment outlook and a pro-business climate that’s going to attract a large millennial population. Taking these vital factors into account, today we’re revealing 10 great places to invest in the USA in 2018…

San Antonio has one of the largest population of US cities and its economy is booming, pushing the population up even further. Between 2010 and 2014 the population of the city grew by 8%. San Antonio is an attractive option for investors as home values are already displaying steady year-on-year growth. That isn’t expected to slow any time soon, especially with the population growing so fast. The median property price in the city is around $232,900 (£173,650), which is lower than other big Texas cities and the rest of the United States.

We’re very excited to be attending the next Your Overseas Home shows in London and Chester. Don’t miss your free tickets – these are a special kind of show, smaller and designed specifically to connected people seriously looking at a home in the US with real estate, currency, legal and removals specialists.

The city also offers low down-payments, low interest rates and stable mortgage rates. Tourism is a big industry in San Antonio, which is good news for those wanting to invest in holiday rental property. There is also a large millennial population drawn in by the city’s growing jobs market, with opportunities in oil and gas, manufacturing and the military. Other great spots for investment in Texas include Arlington, Dallas, Austin and Houston. 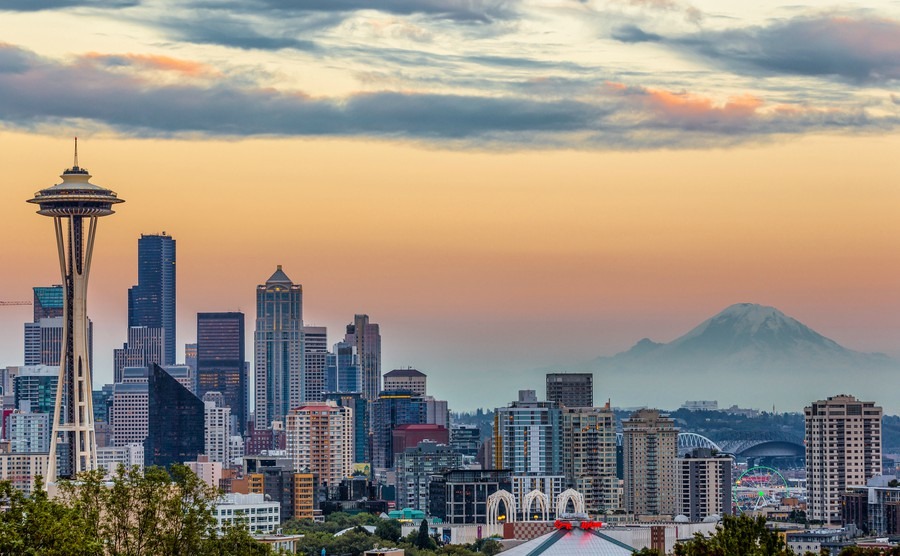 The Seattle skyline with Mount Rainier

In the recently-released Urban Land Institute’s 2018 Emerging Trends in Real Estate report, Seattle was named the number one investment market in the USA. The city’s cool and laid-back lifestyle, highly skilled workforce and varied mix of industries have all contributed to a rising population, which shot up by over 3% last year. Property prices have seen the highest year-on-year growth in the US of 15.5%, but they are predicted to rise a little further before slowing. The median property price is $680,000 (£507,000), which is pricey, but with median monthly rent of $2,500 (£1,863) this amounts to an impressive rental yield of 4.63%. Find out more about buying in Washington state in our dedicated column.

North Carolina’s capital is regularly listed as one of the best places to live in the US, known for its great weather, culinary scene, universities and booming tech industry

North Carolina’s capital city is regularly listed as one of the best places to live in the United States. It’s an attractive location known for its great weather, culinary scene, universities and its booming tech industry. It’s the city’s flourishing jobs market that’s responsible for attracting lots of renters with high salaries, though, which is great news for buy-to-let investors. The property market in Raleigh is super-hot, with the median property price currently $336,140 and median monthly rent of $1,375. 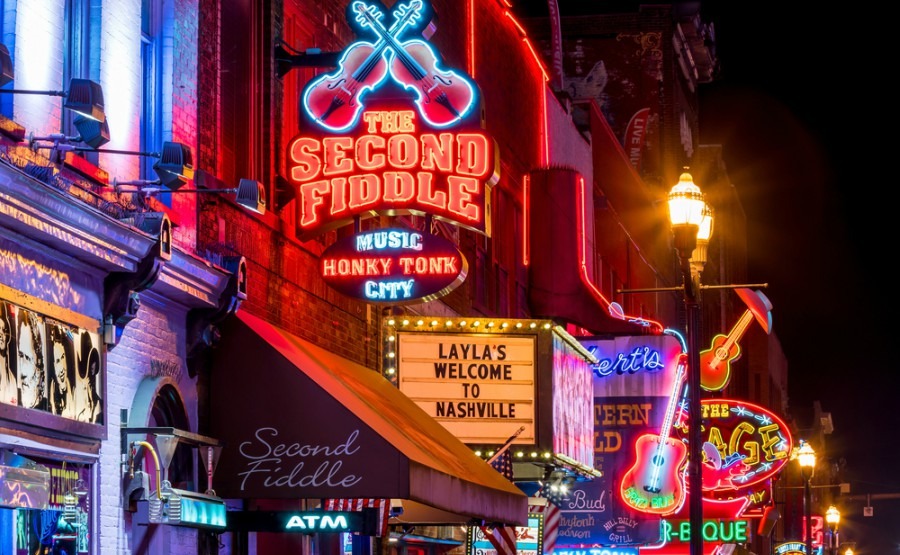 Nashville’s population of under-35s is booming. Millennials are being drawn in by the city’s unique culture and history. They’ll be able to find a job too, with the strongest employment growth in the country. Employment levels have shot up by 3.6% over the last year. Home prices have also increased by a huge 13.7% in the last 12 months. The median property price in Nashville is now $339,990 and median rent is $1,600.

Ohio’s state capital offers investors an enticing mix of low property costs and high rent. For a property bought for the median price of $157,900 (£117,650), property owners are able to charge rent of $1,162 (£866) per month, which means the average investor should be able to easily pay off a mortgage on a property within a decade. Major employment sectors within in the city include finance, healthcare, government, education and manufacturing.

Between 2010 and 2016 the population of Atlanta has grown by 12%. Employment in the city is up by 3.5%, and home values have increased by 9.5% in the last year. The average Atlanta property will set you back $326,500 (£243,000), and while rental yield is currently relatively low, it has increased by 6% from this time in 2016, and looks set to continue on its upward trajectory. The city is an exciting place to be and it seems the world is getting wise – the city has the world’s busiest airport and a booming film industry, which translates into demand for short-term rental. The population of young professionals is on the up, as is investment into the city.

Get the best possible deal for your money – have a talk to us and we can recommend to you tested mortgage specialists on the ground.

Property prices in Jacksonville, Florida’s largest city, are currently $155,194 (£115,600), well below the national average of $205,100 (£152,800). Over the last year they have shot up by 10.8%, and this growth doesn’t look to be slowing any time soon. The city is home to four Fortune 500 companies and 13 of Forbes Global 500, which goes some way to explaining the employment growth of 3.6%. The city also offers new arrivals excellent healthcare at 20 hospitals, low cost of living, a wonderful climate and a business-friendly environment. Rental yields are also excellent with a typical $100,000 home currently able to be rented out for 20% more than the national average. 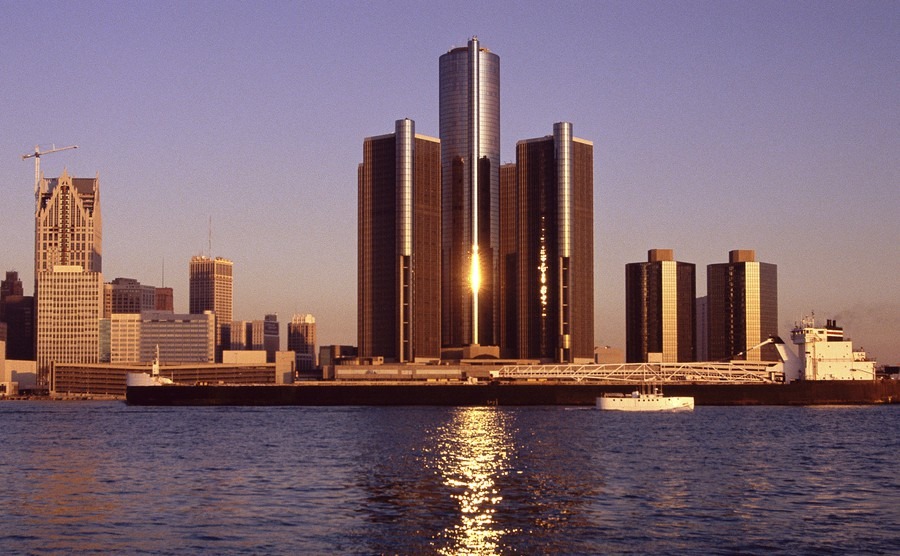 A new dawn for Detroit?

Detroit was one of the cities hit hardest during the crash, but low property prices have been drawing start-ups, millennials and students in their droves. There are now more than 100,000 students living within 25 miles of the city, bringing their wealth and skills to an area that badly needs it. Huge investment over the last year into automotive industries will see new and expanding factories, and a predicted 200,000 new jobs created. While the property market certainly has its problems, and you’ll need to tread carefully, if you’re able to invest cash, the average property is currently just $44,900. With a high population of renters, and increased employment, rental yields should grow rapidly over the next few years. The city where Henry Ford invented modern car manufacturing just over a hundred years ago wasn’t going to be kept down for long and you can be part of its renaissance.

The city where Henry Ford invented modern car manufacturing just over a hundred years ago wasn’t going to be kept down for long. You can be part of its renaissance.

Orlando is another spot that’s experienced huge population growth in the last year, second only to Seattle, with growth of 2.47%. Since July 2016, prices in Orlando have risen by 12% and employment is up by 4%. The city’s wealth of attractions mean investors are guaranteed renters, whether they’re long term or holiday lets. The average property price in the city is just $174,100 (£130,000). 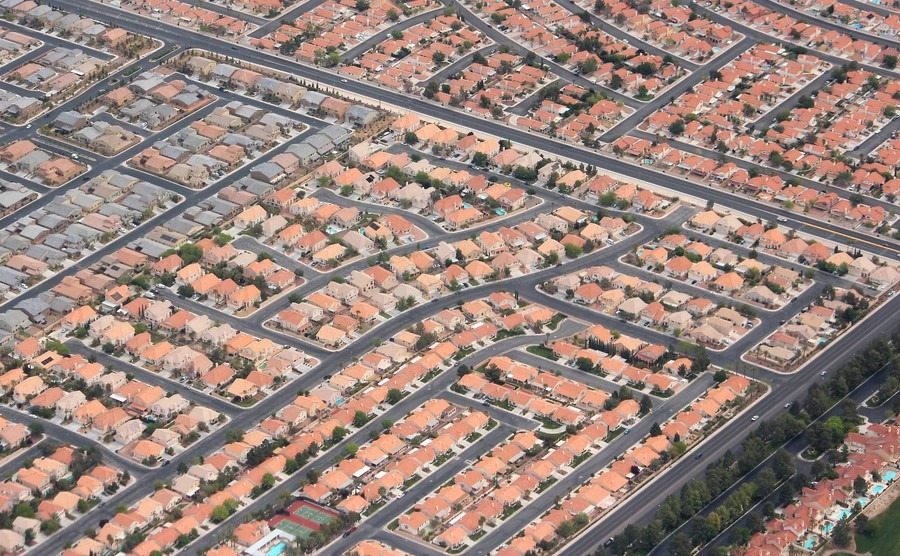 Suburbia, Las Vegas style, with impressive returns of 5% plus.

Las Vegas has seen the third-highest growth in employment in the country in 2017 at 3.7%. As a result of employment opportunities in tourism and gaming, manufacturing, mining and aerospace, the population grew by 1.68% last year. The average property price is $237,900 and average rent of $1,342, amounting to an impressive rental yield of 5.47%.

Find out everything you need to know about moving long-haul in our free Emigration Guide .

The pound has strengthened against the dollar

Another factor in choosing America for investment is the surge in the value of the pound against the US dollar. This time last year each pound bought around $1.22 whereas now it buys $1.35, taking your $200,000 Florida villa or Detroit street down in price from £166,650 to just £148,000, at the interbank rate.

To find out more about buying in USA investment hotspots, let our Resource Team know what you’re looking for in our enquiry form below, and we’ll be in touch with information and recommended local estate agents.