Your guide to buying a home in New York City

Yes, you can live in New York City! Or at least, you can buy a property there. Read our guide to the most exciting neighbourhoods for 2018, what you will pay and your all-important need to knows.

So how possible is that? Perfectly possible, if you ask the 120,000 British people already there. New York is the pre-eminent destination for Brits to emigrate and make their fortune. There’s no language barrier and you’re just one direct flight from the UK. Of course getting to work there legally is not easy, but even if you can’t do like those all those other Brits and get a visa, you can still own a holiday home there (making you very popular indeed with all your nearest and dearest).

Drop some of your British reserve to make the best of your life in New York– less Sense and Sensibility, more Sex and the City

According to the ratings agency Fitch, property in New York City is undervalued by 10%, while rising by more than 5% in price per year. If you’re investing here you’ll be in competition with investors from across the world. Get your documentation and financing in place before making the trip, to maximise your negotiating position. You could also buy through a real estate investment trust (REIT), or through a turnkey property company, which allows you to buy a property, turn it around and rent it immediately. There are numerous companies specialising in turnkey properties, which is especially handy for buy-to-let investors based overseas. 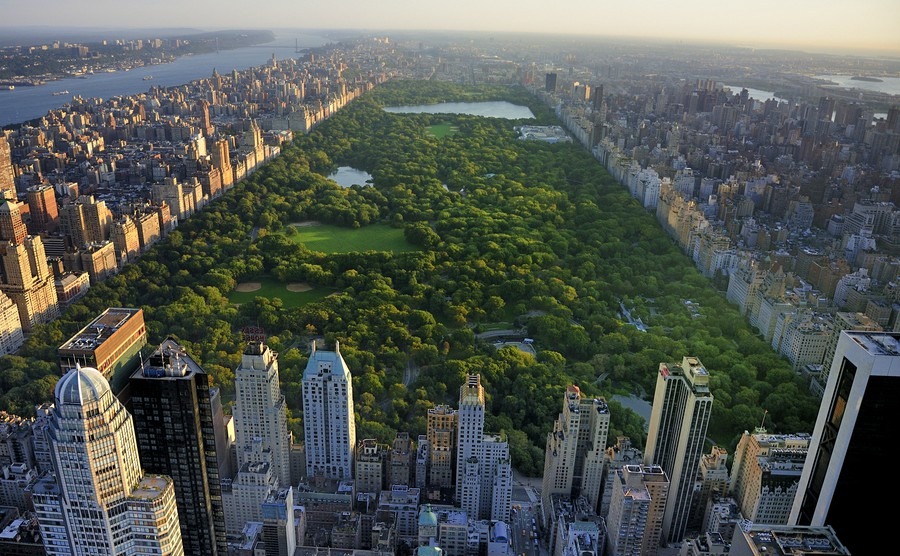 Monthly rent for a one-bedroom apartment in Manhattan is on average $3,000. Outside of Manhattan, a one-bedroom apartment averages just under $2,000. If you need something bigger and central, a Manhattan three-bedroom property will set you back around $6,000 per month. Outside of the city centre, it’s just over half that amount ($3,218). Currently, the most expensive neighbourhoods to rent in are Battery Park, Carnegie Hill and Tribeca while the cheapest are Union Port, Tremont and Oakwood. In Brooklyn, the average rent is $2,550, in Queens $2,350 and in New Jersey $1,850.

There are minimal restrictions on condos – they welcome foreign investors, pied-a-terre buyers and buy-to-let investors.

If you’re looking to buy, the average price of a Manhattan apartment according to data collected by Zillow, is now $2.19 (£1.63) million. Across the water in Brooklyn, the median home cost dips a little to $805,000. Over in Queens, the median home value is $547,900 (£410,000). If you hop across the Hudson to New Jersey, the median home price here is even lower, just under $300,000, demonstrating the closer to Manhattan you are, the higher the price of property.

Buying is easy, with the USA having led the way in innovative online listings services. Our partner Rightmove has over 2,600 New York properties listed from under $500,000.

What can you buy in New York?

In theory there are no restrictions on real estate ownership for foreign buyers, and indeed a significant portion of New York real estate does belong to foreign corporations and nationals. Non-resident international buyers do face restrictions though because co-ops (Cooperative Housing Corporations) usually require buyers to present US tax returns and proof of New York employment. Listings clearly cite whether the property is a co-op or not. When you buy a property of this kind, you’re essentially buying shares in a corporation proportionally to the size of the apartment, and you become a partner with your neighbours. The buildings are governed by co-op boards, who make every important decision regarding the building – including who can buy. Rather than owning the property outright, in this instance you own a ‘proprietary lease’.

If you want a beautiful New York home, you’ll need all your negotiating skills. Read How to Negotiate Abroad for some insider tips, written by a licensed realtor

Co-ops impose limits on how much financing buyers can use to fund the property and restrict buyers being able to sublet their apartments – which automatically makes a co-op less attractive to investors. If you’re allowed to rent out your co-op, your tenant will need to be approved by the board, and when the time comes to sell, so will the new buyer. These restrictions needn’t put you off – it’s worth checking the guidelines of the co-op if you have your heart set on something, but there are also lots of condos and townhouses without restrictions out there that involve far less jumping through hoops to make a purchase.

Around 25% of the residential buildings in Manhattan are condos, and they are rapidly growing in numbers. Condominiums are regular real estate where an owner owns a property and a proportional share of the common areas. There are minimal restrictions on condos – they welcome foreign investors, pied-a-terre buyers and buy-to-let investors. 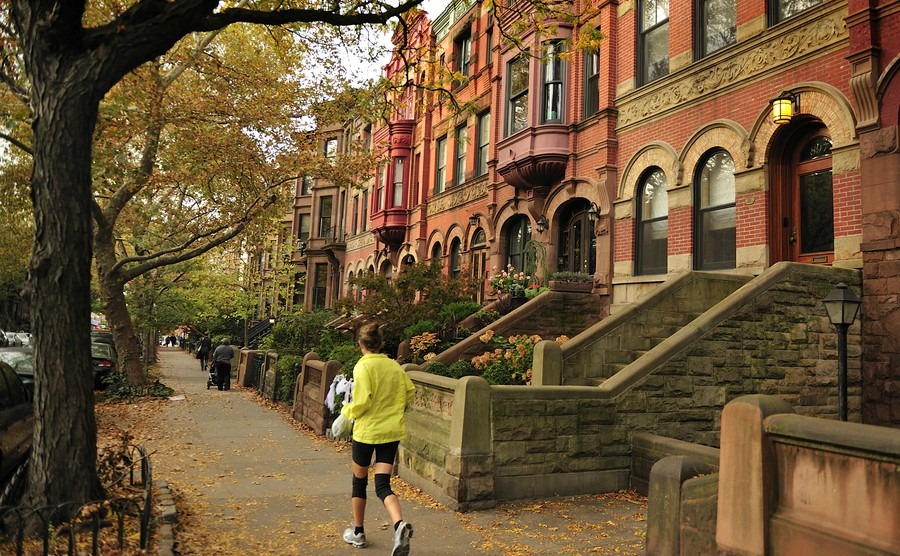 Just off the Brooklyn Bridge, along the banks of New York’s East River, is Brooklyn Heights – New York city’s first suburb. The area’s pre-civil war Brownstone houses, tree-lined streets and proximity to Manhattan make this is a popular spot for families. Prospect Heights is another well-liked, more centrally-located Brooklyn neighbourhood, popular for its proximity to 582-acre Prospect Park, and the Brooklyn Public Library. 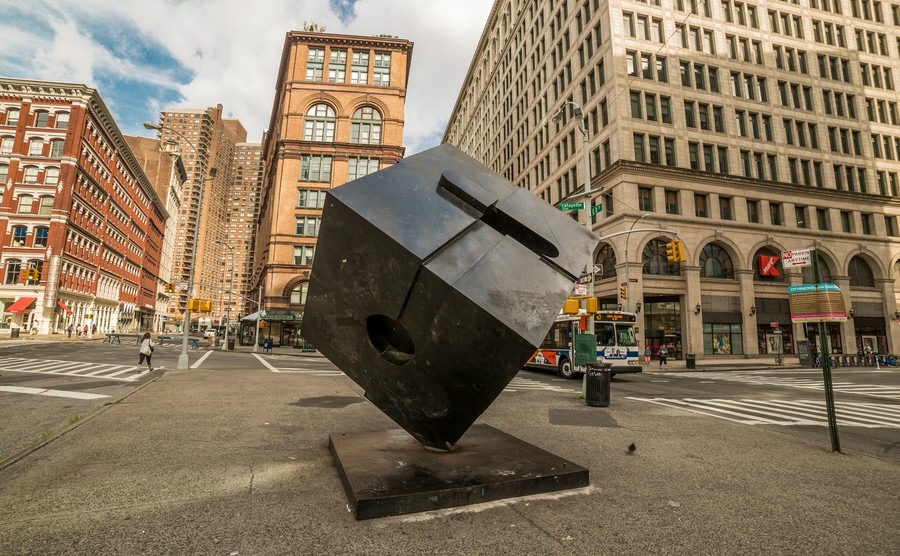 If property prices of over $2million for two bedrooms don’t put you off, and you’re keen to rub shoulders with the who’s who of New York society, NoHo is a great option. This upscale, primarily residential area is located north of Houston Street, (hence the name. South of Houston is SoHo) between Greenwich Village and the East Village. It was once a business district, then artists like Andy Warhol and Robert Mapplethorpe moved in and prices shot up.

Kips Bay is perfect for those seeking out a little more peace and quiet in bustling Manhattan. The area, located on the East River, just below Murray Hill – another thriving spot – is a favourite with young professionals, due to its central location, great shops and buzzing restaurants and nightlife.

The sterling value here is the interbank rate at the time of going to press. This is not available to the general public, but contact Smart Currency Exchange for a free, no-obligation quote and a friendly chat about exchange rates. You can also download Smart’s Property Buyer’s Guide to Currency, packed with insider tips.

For those who want to have an easy commute into the city, but prefer a more suburban feel, Pelham Manor is an excellent choice. This is a safe area, located on the water, with some excellent schools and lots of families. The average property price is $821,400 (£613,000) and you can be at Grand Central Station in 30 minutes.

This family home in Pelham may require a little bit of a facelift, but has bags of potential. The property boasts five bedrooms, four bathrooms and is on the market for $765,000 (£570,000). 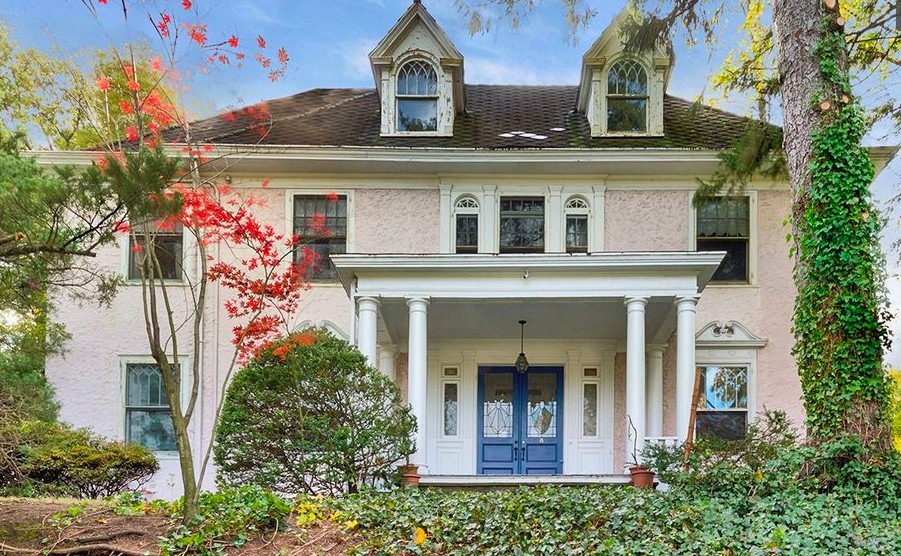 Forest Hills will appeal to those wanting to be close to Manhattan but also close to nature. The suburb is home to Forest Park, which has 500 acres of trees, hiking trails, bridle paths and one of NYCs best golf courses.

This three-bedroom family home has a full basement, wooden floors throughout, is located close to Forest Park and is on the market for $699,000 (£521,700). 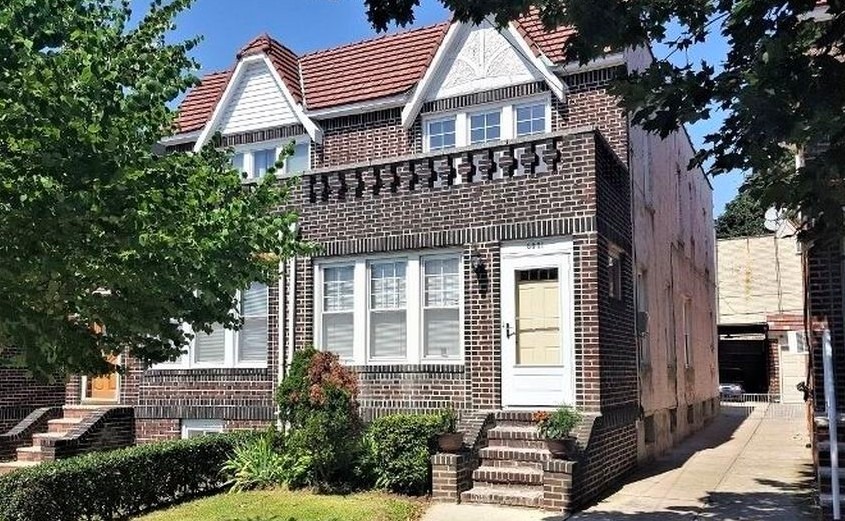 We can’t promise the full Chandler-Joey-Monica-Phoebe etc. experience, but there will be a Janice or a Gunther hanging around in your neighbourhood bar or yoga class. Making friends shouldn’t be an issue. For a start, you won’t have to go far to find a British accent as so many of us have made the move to work for global corporations. An online search will bring up multiple British expat social groups operating in the city. You shouldn’t need to hunt out British friendships though – New Yorkers might not be the gentlest of people but they generally like and welcome the British, who have excelled in New York-based newspapers, movies, television shows, on Broadway and on Wall Street. New Yorkers are not people who tend to stay at home, but you will probably need to drop some of your British reserve to make the best of your life there – less Sense and Sensibility, more Sex and the City.

Getting there, all year

You can fly to New York all year round from London, and if you book in advance or get a deal, you can secure tickets for as little as £150 one-way. It takes around seven hours to fly direct but you can secure cheaper flights through providers like Lufthansa, if you’re okay with going via Frankfurt in around 10 hours. Norwegian Airlines offer excellent budget prices. Finn Air, British Airways, Virgin Atlantic and Austrian Airlines are some further options to consider. 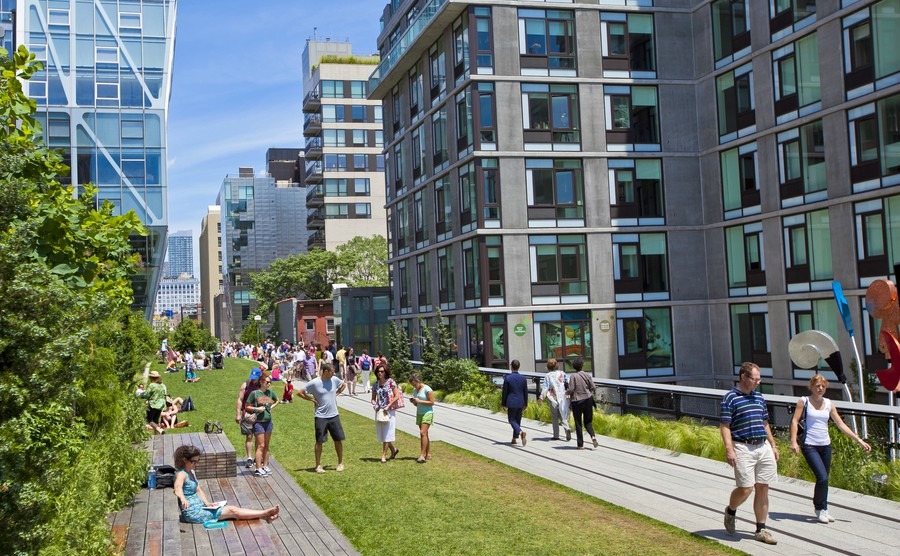 When you get there

Oh, where to start! Anyone buying in New York City will have already ticked off the Statue of Liberty and Empire State Building, walked around Central Park and “done” the Guggenheim, the Museum of the City of New York and Museum of Modern Art (MOMA). After all those, take a stroll along the High Line, a raised train track that’s been transformed into an inner-city park weaving through the high-rise buildings.

For a day at the beach, take the Long Island Rail Road (and ferry) out to Fire Island, which has a great beach for the daytime and some pretty special clubs for when the sun goes down. It’s very LGBT-friendly, especially at Cherry Grove Beach. Easier to reach is Long Beach, just an hour from Penn Station, which has had $42million (yup, $42 million) spent just on rebuilding its boardwalk since being wrecked by Hurricane Sandy in 2012.

To enjoy New York state countryside and a bit of culture, drive an hour out of the city to Cornwall, NY, to see monumental sculpture amid rolling green hills at the Storm King Art Centre. You can hire a bike, walk or take a tram round the exhibits in this 500-acre park. 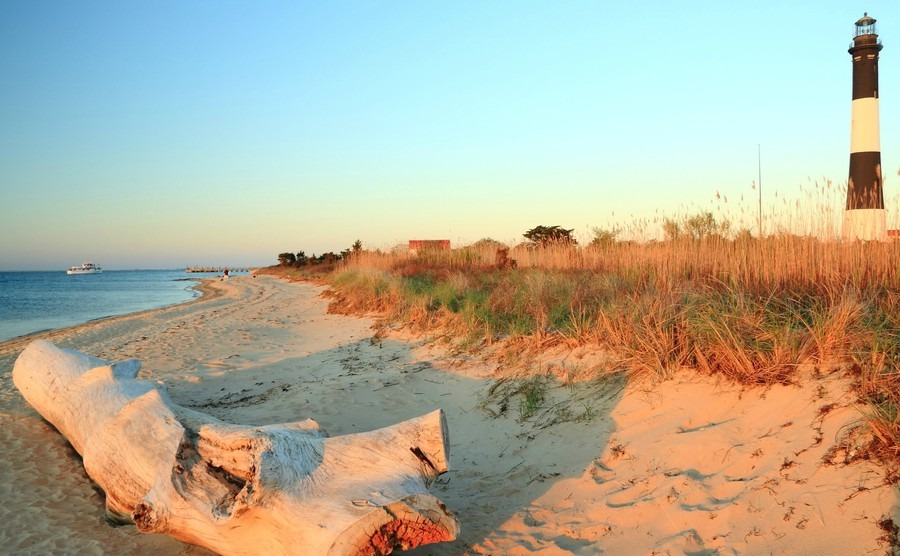 Big though the USA may be, there’s a lot crammed into this small section of the country, and in a couple of hours by train from New York you can be in Philadelphia, Baltimore, Boston or Washington DC. All that history, culture and sport on your doorstep: The Smithsonian, The Air and Space Museum, Liberty Bell, Gettysburg, The Freedom Trail, Harvard… you won’t be bored.

• Owning a property in the US does not give you the right to live there, or even travel there. Do not risk overstaying your visa/visa waiver or you’ll never be let back in!

• It’s important to understand the difference between a co-op and a condo property. If you’re buying a co-op, you need to demonstrate to the co-op board that you’re a reputable buyer. They will require proof of your financial standing, i.e. bank/ investment statements, wage slips, at least two years’ completed tax returns. It’s best to compile these documents before you even start looking so that you’ll be ready to hand them over when you find the right property. Co-op boards can reject you without giving any reason, which can be very frustrating!

• Generally, unless you’re buying an older property, there’s no need for a property inspection.

• To buy in New York, you should budget for another 5% on top of the purchase price.

• Until the sale contract is fully-executed, either party can pull out at any time without penalty.

• In a best-case scenario, the process usually takes two-to-three months from accepted offer to close.