10 reasons why we love France

France celebrated Bastille Day in 2020 a little differently, without the usual military parades but with a special tribute to its healthcare staff. The lockdown has given many of us the chance to rethink how we live our lives, and as Rightmove report, they saw a 32% increase in searches for French property on their website.

SEARCH for thousands of French properties on our portal.

At France Property Guides we have been overwhelmed, over the past few months, by the increase in interest in buying a home in France and/or moving to France. The lockdown could hardly have come at a more interesting time, as so many of us suddenly realised that we could work ‘remotely’, even from a cottage in France. But from 31 December it will all get much more complicated to move to France and continue working.

If you won’t be able to move to France before 31 December it’s not the end of your plans. Read How to Live in France After Brexit. 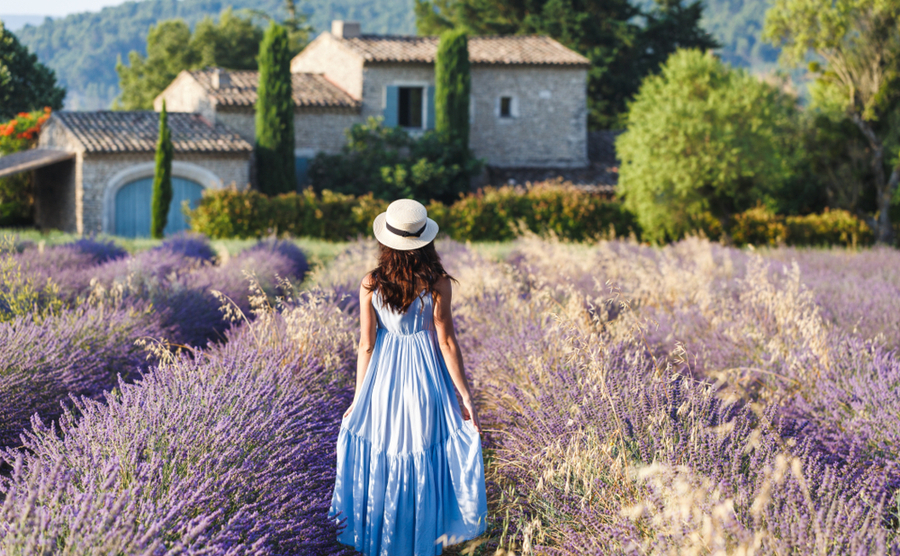 Your first year in Provence?

Helping each other stay democratic has been a two-way street for the British and French. Through strong defence and alliances – especially the Entente Cordiale signed in 1904 – the British and French have been on the same side in every conflict for over 200 years. Not bad, considering how appallingly we got along before that! Our own Thomas Paine from Thetford helped to lead France’s revolution, while Britain has always been a handy escape for Frenchmen needing a refuge, from the Huguenots to Charles de Gaulle.

Paris is “a moveable feast” (Hemingway), “always a good idea” (Audrey Hepburn), “a lesson in history, beauty and the point of life” (Thomas Jefferson). We couldn’t agree more. Plus, it has the Olympics starting in slightly over five years, so the city is getting a major refurb and property prices are likely to go shooting up.

Okay so we love France, but do we love the French? The evidence is that we do. That’s why, unlike in other countries, we tend to live among the local community rather than establishing our own expat “ghettoes”. Sure, we may sometimes hear of British people setting up a fish and chip shop in France or similar crimes against the French lifestyle, but when you compare that to Spain or Cyprus, it’s obvious that we want to live among French people.

We couldn’t find any data on whether more British people marry French people than any other European country, but given how we just love English spoken with a French accent (and vice versa) we’re going to assume that plenty of us have done! Don’t assume you need a significant other to make the move here – read the experience of a single Brit in France who made a leap of faith. 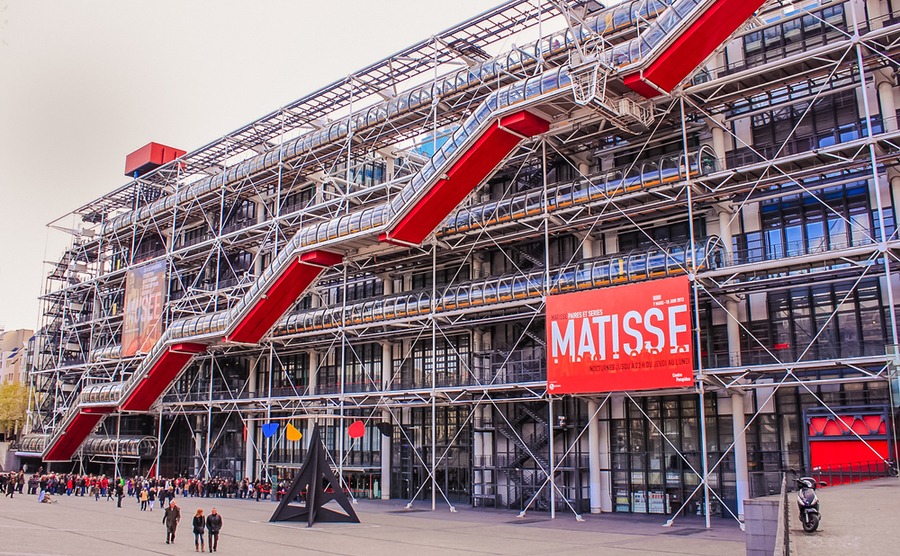 Nowhere quite does a cottage like the French. Then again, nowhere quite does a chateau like the French either, or an apartment on a boulevard. French homes are generally well-built – their building regulations are at least as strong as those in the UK and US – and stylish too. It is no coincidence that some of the more exciting styles of architecture have French names, from the Carolingian cathedrals from Charlemagne’s day, via French Gothic to Belle Epoque, Beaux Arts, Art Nouveau, Art Deco…

Yet the tradition of liveability is still all-important. It’s why Paris has limited building the huge tower blocks like London, Moscow or New York.

Of all the British children under 15 who live in continental Europe, a third live in one country, France, according to Office for National Statistics data. Why do we take our children to live in France? Because it offers a combination of politeness and opportunity. The book French Children Don’t Throw Food was an international best seller, challenging those of us in the UK and USA to wonder where our own parenting has gone wrong!

Yet children in France also have easy access to skiing in the Alps, swimming in the Med, a better diet and a more grown-up attitude to alcohol too.

A holiday home in France is a wonderful investment – both financially and sociably – when you buy as an extended family or with friends. Read our guide, Buying with Family.

Many of our favourite artists were born in France, plenty died in France and nearly all tried in France. The country has provided light and inspiration for everyone from Leonardo da Vinci to Van Gogh to David Hockney (who recently moved to Normandy). It’s produced a few great artists of its own too.

But it’s not just painters and sculptors. Elton John, David Bowie and Pink Floyd all found inspiration in French recording studios. The list of writers who have taken inspiration from France goes on longer than a Proust sentence, but we have to mention Dickens, Hemingway, Somerset-Maughan and Oscar Wilde. More recently, Julian Barnes and Sebastian Faulks constantly return to French themes.

When Elizabeth David published French Country Cooking in the UK in 1951 it was a ray of French sunshine in a grey nation still suffering rationing.

Obviously. From Escoffier to Raymond Blanc, we have to thank the French for coming to the UK and improving our diet! When Elizabeth David published French Country Cooking in the UK in 1951 it was a ray of French sunshine in a grey nation still suffering rationing. Charles de Gaulle may have said: “How can you govern a country which has two hundred and forty-six varieties of cheese?” but he didn’t know the half of it. There are at least 1,000 distinctive varieties of cheese in France.

France is a constant reminder that we don’t have to eat in chain restaurants and that a skilled waiter and sommelier are friends indeed. 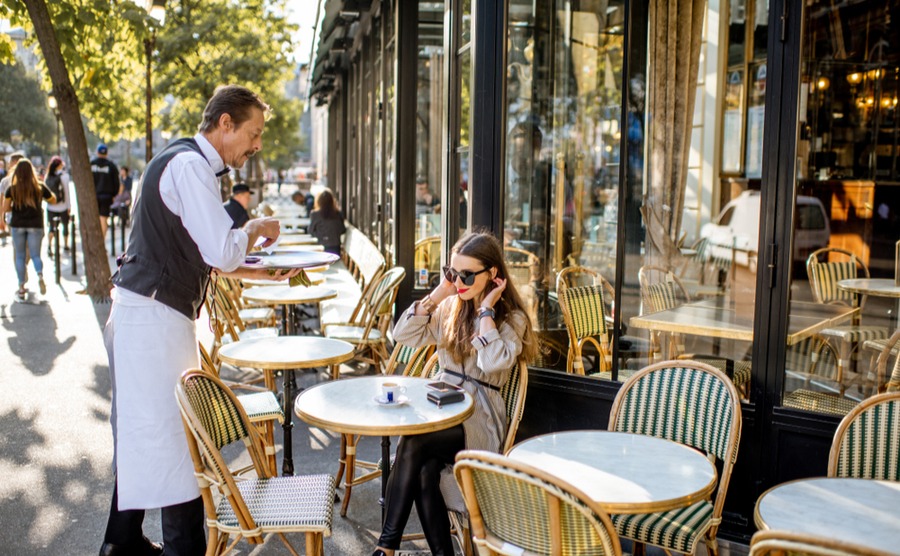 How it should be done. Coffee in Paris (RossHelen / Shutterstock.com)

Back down to earth, the Britons and Americans love to go abroad, but it does help if the country works properly. France may suffer the occasional strike but it works at least as efficiently as the UK or US. It has the coolest trains – who can forget their first ride on a double-decker train?! – including the TGV. It has beautiful roads. And it has efficient airports.

Ready to go? Get in touch with trusted estate agents, currency specialists and lawyers – your ‘Golden Three’ – today to kickstart your buying journey.

Just as every English schoolchild is mortified to put on the full French accent for their GCSE French oral exam, we all love practising it in private. From Inspector Clouseau to “your muzza was a hamster and your fazza smelt of elderberries”, it’s just part of our comedy DNA. And while it’s sort of nice to go to Spain or Germany or Greece and have people insist on speaking English to us, having spent five years at school learning the pluperfect tense, it’s quite nice to give it a go. And the French will certainly give you the opportunity!

You can swim to France. Not that we’re recommending that. Indeed until 12,000 years ago you could walk across, when the North Sea was a giant glacial lake and the Channel was a valley. It all ended in one cataclysmic waterfall, but no doubt over the next few hundred millennia you’ll be able to walk to Dieppe again.

In the meantime, being able to transfer your car to Calais via the Chunnel in just 35 minutes or taking a ferry in 90 minutes isn’t bad. Paris remains our closest capital city without requiring a flight, and who knows how vital that relationship will be if the “climate emergency” campaign takes off.