The wine regions of France

There are countless reasons why France remains us Britons favourite country to visit: its location, its diverse landscape, the food, the historic cities, the relaxed lifestyle – the list goes on. World-class wine certainly makes the list as well. With over two million acres of vineyards across the country and up to eight billion bottles being produced each year, the country’s wine producing regions deliver quantity and quality.

Some of the most important wine growing regions are Bordeaux, Burgundy, the Loire Valley, Champagne and Languedoc-Roussillon. I’m sure you plan to enjoy the odd glass on your patio, in your garden or on your balcony when you finally purchase your dream home over here, so here’s what you can expect to be sampling from each.

Read your free guide, How to Negotiate Abroad, for insider advice from estate agents on getting the best possible deal for your property.

The Bordeaux region in the south-west of the country has been producing wine since the first century AD. Today, more than 180 million bottles of fine red wine are produced around here each year, making it one of the most important and famous wine regions in the world.

Bordeaux is one of the most important and famous wine regions in the world.

The Gironde Estuary and its two major rivers, the Dordogne and the Garonne, flow through its heart. The vast majority of the region’s great wine estates (chateau) are found near the banks of the Gironde, or one of its tributaries, such as St Émilion and Pomerol on the right bank and the mythical Haut Médoc on the left.

FIND properties for sale in Bordeaux on our property portal.

Burgundy (aka “Bourgogne”) in eastern France, south-east of Paris, may be small in size but its influence on the French wine industry has been huge. The region covers 22,000 hectares between Mâcon and Lyon, stretching 34 miles from north to south. It consists of four regions within this area (Chablis, Côte d’Or, Côte Chalonnaise, and Mâconnais), plus Beaujolais which lies around 70 miles south.

This long, narrow wine region is in constant competition with Bordeaux for the right to claim to be the producer of the world’s finest red wines.

DISCOVER homes in Burgundy quickly and easily on our property portal. 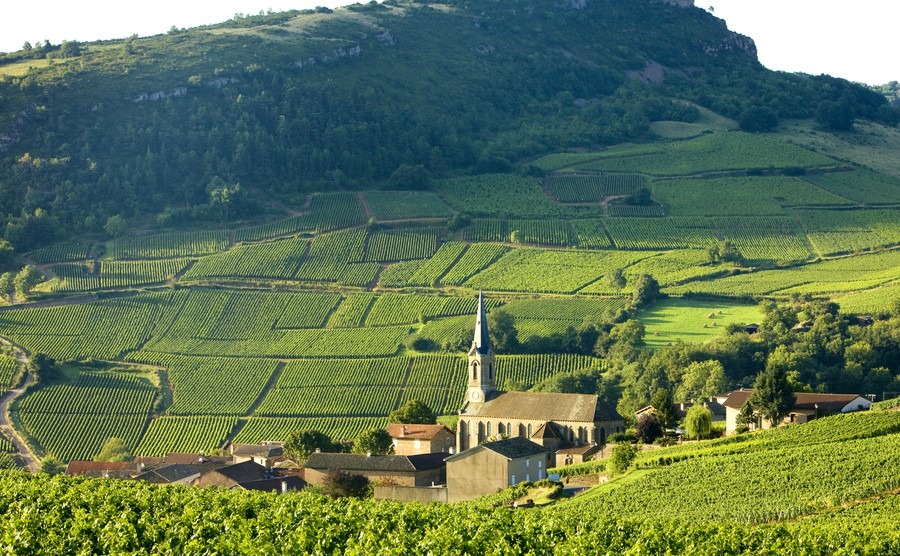 Vineyards in the Burgundy region

The Loire Valley wine region follows the Loire River from the Muscadet region near Nantes on the Atlantic coast, to the region of Sancerre and Pouilly-Fumé south-east of Orléans in north central France.

The region is typically divided into three sections: the Upper Loire, which includes the Sauvignon blanc dominated areas of Sancerre and Pouilly-Fumé; the Middle Loire which is predominantly home to Chenin blanc; and the regions around Touraine, Saumur, Chinon and Vouvray where Cabernet franc can be found.

If you are heading off for a viewing trip to France to see some properties and sample some wine, check out the Viewing Trip Guide to help you get organised.

Champagne, which sits around 200 kilometres south-west of Paris, is home to the eponymously named sparkling wine. Consumed the world over on the most special of occasions, its lofty status has led to its authenticity being carefully protected.

Champagne is home to the eponymously named sparkling wine.

As such, the viticulture boundaries of the Champagne wine region are legally separated into five wine producing districts within the province: Aube, Côte des Blancs, Côte de Sézanne, Montagne de Reims, and Vallée de la Marne. With the towns of Reims and Épernay serving as the regions commercial hubs.

The Languedoc-Roussillon, bordering the Mediterranean in the South of France, remains the largest wine producing area in the world, with over 50,000 vines – around a quarter of all the wine-producing vines in France – over an area of 10,500 square miles. It stretches from Nimes and Montpellier in the east, around the Gulf of Lyon to the border with Spain, and is responsible for producing fabulous drops like the sparkling Mauzac-based Blanquette de Limoux, the sweet reds of Banyuls, and the rosés of the Cotes du Roussillon.

The region has an ideal climate for wine production, with very hot summers and reasonably mild winters. Plus the soil here is largely limestone and sandstone, allowing numerous types of grape to grow fervently.