Books that capture the heart and soul of America

Americans love their books and their writers. Here we look at the best books to read about the USA for those hoping to make a success of their life there.

When you move abroad you’re likely to encounter things about your new country that flummox you, whether that be the personality traits of your new neighbours or colleagues, traditions you’ve never heard of, or slightly different ways of going about your daily lives. Although English-speaking, there are a many aspects of the American way of life that might come as a shock, and that can slow down the settling in process. Here at the USA Property Guide, we recommend conducting as much research as possible into the country you wish to call home prior to your move. One (fun!) way you can do this is by absorbing its literature. Today, in honour of UN World Book Day, which fell on April 23rd, we’re running through the best reads for anyone dreaming of moving to the USA.

A People’s History of the United States – Howard Zinn

Learning the history of a country will help you gain a deeper understanding of how things operate, and why Americans think the way they do

America has a fascinating history, and anyone moving there should take the time to brush up on their knowledge of how the West, and the East, and the South, was won. Learning the history of a country will help you gain a deeper understanding of how things operate, and why Americans think the way they do. Zinn’s accessible and thorough account has been described by many as ‘required reading’ for everyone in America.

We tried our best but just couldn’t choose which Bill Bryson book about America is the most suitable – so we’re recommending three! Bryson is the king of finding the fascinating (and hilarious) in the seemingly mundane. Notes from a Big Country: Journey into the American Dream follows Bryson back to the USA after a twenty-year stint in the UK. The book sees him rediscover the joys of his homeland, whilst also being baffled by much of what he finds! This is a highly entertaining and informative examination of the American way of life – plus its jam-packed full of laughs.

The Lost Continent: Travels in Small Town America, is another fantastic option, which tracks Bryson as he journeys through the small towns of the USA encountering many a colourful character along the way. Once you’re on a Bill Bryson roll, you might also want to check out A Walk in the Woods, perhaps it’ll even motivate you to take on The Appalachian Trail. 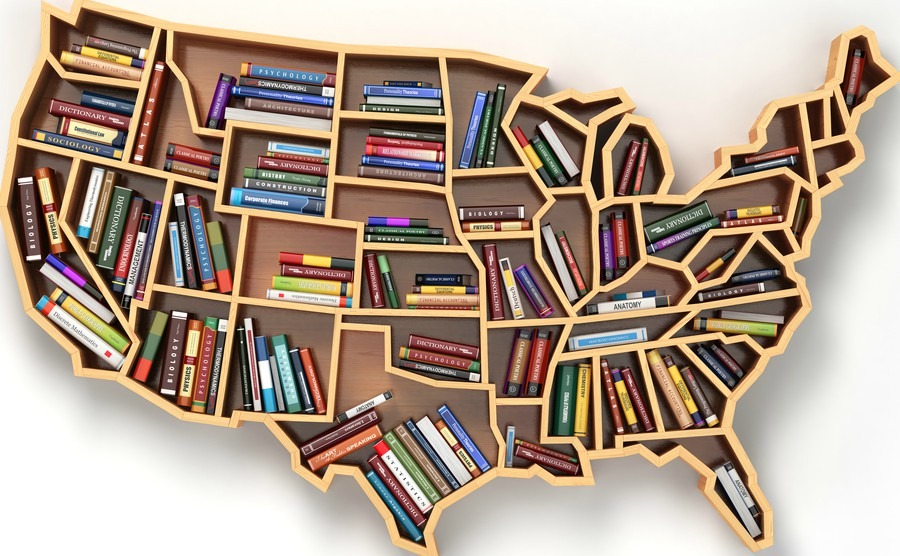 The books that made America (or at least, our idea of America)

As Brits we’ve grown up watching, and reading, about the USA, so it can feel familiar to us despite there being many differences. In her book, Walmsley investigates the areas that make us different, including taste in food, dress, home decoration, the way we conduct business, vacation, engage in sex, and even die. It’s the perfect read for anyone wanting to understand the traits of those who will soon be their neighbours.

Simply the best way to understand the vast expanse of prairie in the middle of America. It brings to life such amazing characters as Crazy Horse, General Custer, Buffalo Bill and Bonnie and Clyde and is travel writing at its absolute best.

We can’t make a list of American books without naming some of the classics that depict American life through the centuries.

We can’t make a list of American books without naming some of the classics that depict American life through the centuries. You might have studied them at school; maybe they are what inspired you many moons ago. So how about rereading them? The Last of the Mohicans is about the birth of America. Little Women and Gone With the Wind both cover the Civil War from a female perspective. The Great Gatsby by F. Scott Fitzgerald is about the roaring twenties and reaching for the American dream, and so much be followed by The Grapes of Wrath by John Steinbeck, which covers the Great Depression. Books like Huckleberry Finn by Mark Twain and To Kill a Mockingbird by Harper Lee address the issue of race. Bury My Heart at Wounded Knee is a must for anyone who wants to understand the fate of Native Americans.

America takes its literature very seriously, and many wonderful writers have attempted to write “the great American novel”, that perfectly captures the kaleidoscope of this astounding country. A few examples include most books by Edith Wharton from the last century or by Jonathan Frantzen (such as The Corrections or Purity) and John Updike (especially the Rabbit series) in this. Don DeLillo, Philip Roth, and Tom Wolfe are well worth reading, with women writers Toni Morrison (Beloved), Marilynne Robinson (Housekeeping) and Annie Proulx also helping you to understand and appreciate the American people.

How to Make Friends and Influence People, Dale Carnegie

America invented the self-help tome (check out The 7 Habits of Highly Effective People or The Power of Positive Thinking too), but this is one of the friendliest, most effective and most readable. It was published in 1936 and has sold 30 million copies so far, with its advice on how empathy, charm and honesty can take you to the top, or at least make you very popular.

Art of the Deal, Donald Trump

Written in 1987 by President Trump’s ghost writer, this was at number one on the New York Times best seller list of 13 weeks. It explains how to win in business, and in life (although if the concepts were transferable to you then the ghost writer would be sitting in the White House right now!)