A home near Disney World isn’t just an opportunity for endless wonderful holidays. It’s a great potential investment too – if you know where to buy. Here are the best spots to start your property hunt.

In 2018, Orlando overtook New York City as the number one tourist destination in the United States. It now receives an incredible 75 million visitors. With such high tourist footfall, a property near Disney World can virtually guarantee rental income – so long as you choose wisely and legally.

It’s very difficult to be bored in Central Florida. Firstly, you have Disney and all its fellow theme parks. These are the main lure to the 75 million. To keep them coming, generation after generation, the parks open as new attractions all the time. For example, in 2017, a new waterpark called Volcano Bay opened at Universal Orlando. Walt Disney World’s Animal Kingdom responded with Pandora – The World of Avatar.

Find out what you need to look for when seeing properties by downloading your free Viewing Trip Worksheets. 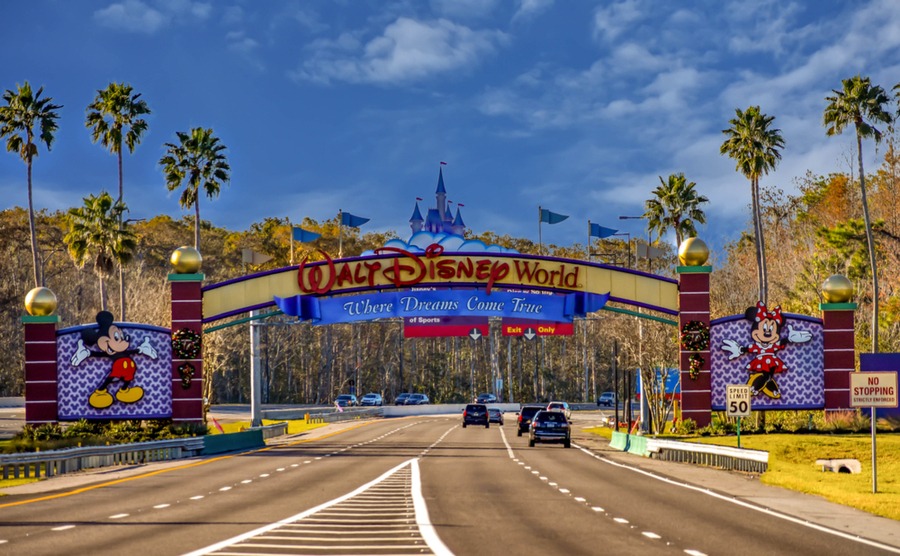 Where the fun begins! (VIAVAL / Shutterstock.com)

In addition to these new attractions, there are plenty of old favourites to enjoy including the Magic Kingdom, Epcot and Disney’s Hollywood Studios. Classic water parks include Typhoon Lagoon and Blizzard Beach.

Disney isn’t just for kids. They’re also behind some of Orlando’s best golf courses, including Lake Buena Vista and Magnolia. Both of these are championship-calibre 18-hole golf courses. Also, in the area it’s possible to enjoy days spent fishing, doing watersports, hitting up spas, or…that other thing Orlando is famous for – shopping! You see, a two-week holiday just won’t cut it: you’ll just have to visit your Florida property more than once a year. Where the fun begins!

It’s not called ‘the sunshine state’ for nothing. Central Florida enjoys 233 sunny days per year. That’s much higher than the US average of 205. Moreover, it’s a state that never shuts. Attractions like Volcano Bay are open all year, along with heated pools.

There is no personal state income tax charged in Florida (though there are federal income taxes). For anyone hoping to make a return on investment by renting out their Florida property to holiday-makers, there are generous tax deductions too.

Read our guide, How to Negotiate Abroad, to brush up on your negotiating tactics and get the best possible price for your property.

There is work too, says Tom Luker of Luker Properties Group, a leading realtor based in Orlando: “Numerous international companies have chosen Orlando as their new base, sparking a huge overhaul and expansion of the interstate and of Orlando International Airport. When complete, it will make it even easier for tourists to access Disney World”.

Currently, flights from the UK take 12 hours and return flight prices start from £520.

The property market around Disney World

According to Mr Luker: “The Orlando housing market is currently very strong with a 6-7% price increase seen annually. This is expected to continue on into 2020. In addition, in terms of the rental market, massive growth in the Orlando tourism industry as well as online rental platforms such as Airbnb and VRBO, it makes for a very strong rental market. In fact, property management companies are reporting over 80% occupancy rates of rental properties in Orlando and its surrounding areas.” According to statistics released by VRBO, homeowners in Central Florida earned an average of $1,350 per month in rental income in 2018. Some made as much as $2,600.

For rental property close to Disney World, Garry Walmsley, Vice President of The Alistair Brown Team @ Premier Sotheby’s International Realty in Florida, reminds us that location, location, location are still the three most vital elements in attracting customers. “Established communities that combine easy access to the theme parks and golf courses typically provide the best rental returns. Few people buy in the city of Orlando itself, preferring instead to buy in one of the areas or resorts that surround the attractions.” 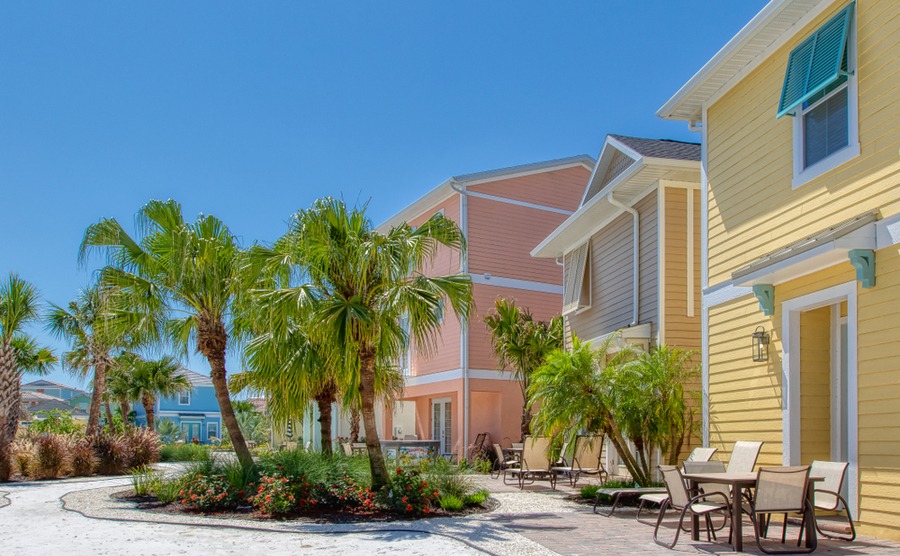 Kissimmee is a city in Florida’s Osceola County, to the south of Orlando. According to Mr Luker, much of the area’s short-term vacation rental property can be found here. The city is just under 30 minutes’ drive from all the theme parks, waterparks and golf courses. Plus, Kissimmee itself borders beautiful Lake Tohopekaliga, which is known for its fishing, wildlife and as a great place to enjoy a waterside barbecue.

The Lakefront Park is a perfect family hangout, offering two playgrounds, a water park and plenty of shady picnic spots. Downtown Kissimmee offers fantastic dining and drinking options when it’s time let your hair down and hit the town.

Don’t get locked into the wrong mortgage – speak to our recommended mortgage specialist to find out your options, with no obligation.

Property prices: According to Zillow, the median home value in Kissimmee is currently $221,300. Over the last year, prices have increased in the city by 6.7%, and are set to rise by a further nearly 4% in 2020.

Rental returns: Last year, home insurance company Schofields ranked Kissimmee as the ‘best place for holiday rental investment in the world’. With return-on-investment of 26% holiday rental owners in Kissimmee could stand to make as much as £30,000 per year. According to AirDNA, a company who specialise in short-term rental data and analytics, the most popular type of holiday rental property in Kissimmee is something with five or more bedrooms. For the best chance of guaranteeing renting out your property, Garry Walmsley advises buyers to stick to West Kissimmee, where the best rental options are found.

For the best chance of guaranteeing renting out your property, Garry Walmsley advises buyers to stick to West Kissimmee, where the best rental options are found.

Davenport is a city in Polk County, where much of the best short-term rental property in the region is found. Located around 50 minutes from Orlando’s major attractions, the area offers a variety of both communities and resorts for purchasers to choose from. That’s further than some want to travel, but bear in mind that Davenport is on Interstate 4, ensuring easy access to Orlando, Disney, Tampa and Lakeland. Davenport itself has a charming town centre, as well as ChampionsGate Golf Resort and The Highlands Reserve Golf Club, one of the best in Florida.

Property prices: Property prices are slightly lower than in Davenport than what you’d find in popular spots like Kissimmee, for similar style properties. The median home value is currently $218,900. Over the last year, prices have increased by 6.5 percent, and they are expected to rise a further 4.6 percent in 2020.

Rental market: According to statistics from AirDNA, Davenport has an A* rental market, that ensures high demand, year-round rentals, and great return-on-investment. The average occupancy over the year is 74 percent, and the average price per night for rentals in this area is $217. HomeAway is just slightly more popular than Airbnb as a rental channel, and again properties with four or five bedrooms are the most popular. 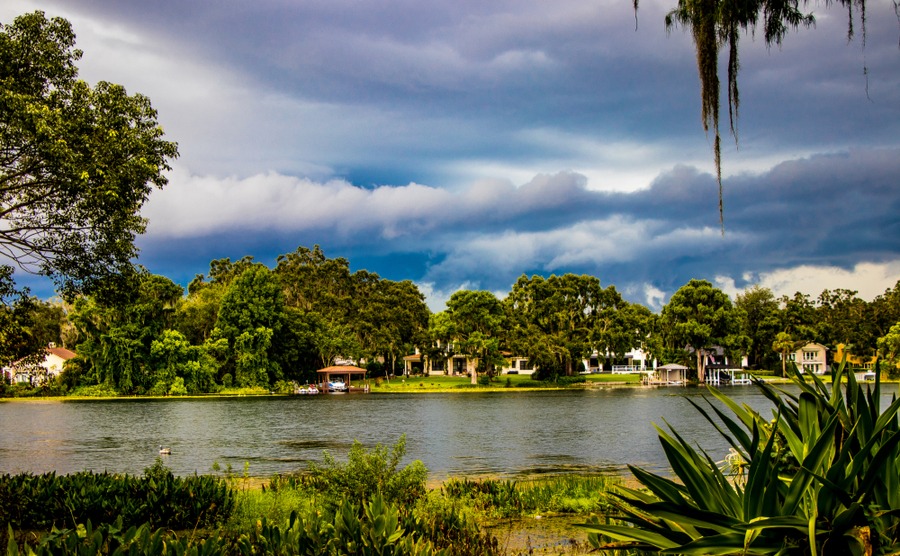 To the north east of Orlando, Winter Park is a 15-minute drive to Downtown Orlando, and 30-minutes from all the Walt Disney attractions. This area is known as an upmarket spot, characterised by beautiful parks and green spaces, wide, tree-lined streets and sensational homes. It is also home to several beautiful lakes, including Lake Virginia, making waterfront living and recreation a wonderful possibility.

When you or your guests are in the mood for something sedate that doesn’t involve a rollercoaster or a wave machine, Winter Park offers a number of great museums, scenic boat tours, a weekly farmers market and many a swanky restaurant.

Halve the cost and double the fun by buying with family. Find out how joint ownership works in our free guide.

Property prices: The median home value in Winter Park is slightly more expensive than the Florida average at $402,700.

Rental returns: According to Mashvisor, the Airbnb occupancy rate in Winter Park is 63 percent. For a four-bedroom property, you can earn an average of $3,230 per month, or for a two-bed property, you’re looking at an average of $2,218 if you rent the property via Airbnb.

Lakeland is around 40 minutes from Disney World, and is consistently listed as one of the best places to buy short-term rental property in the USA. One major perk of Lakeland’s location is that it is equidistant from Orlando’s attractions and Florida’s Gulf Coast beaches, which are some of the most beautiful in the world.

As its name suggests, Lakeland is based on the water – almost 10% of its area is made up of lakes. Additionally, the city itself is home to fantastic museums and restaurants, plus some excellent hiking opportunities and chances for wildlife encounters.

Property prices: According to Zillow, the median home value in Lakeland is currently $167,100. The market is considered ‘very hot’ right now, with prices increasing by 6.3 percent over the last year, and expected to rise a further 4.1 percent next year.

The market is considered ‘very hot’ right now, with prices increasing by 6.3 percent over the last year, and expected to rise a further 4.1 percent next year.

Rental returns: According to AirDNA, the major rental channel in Lakeland is AirBnb, which accounts for 76 percent of short-term rentals. Peak occupancy is in February when it hits 82 percent, but the average for the year is 58 percent. The average monthly income from Lakeland rental property is $1,380.

Located between Davenport and Kissimmee, Haines City is a great place to buy short-term rental property. Demand is high, due to its proximity to Disney (25 minutes), as well as the beaches out on the Gulf Coast. Here you’ll find some great hiking and running nature trails, a couple of top-notch golf courses, and larger homes – ideal for renting – at a lower cost than in other parts of Central Florida. Tampa and all its attractions are just one hour away.

Property prices: According to Zillow, Haines City’s property market is so ‘hot’ right now. The median home value is currently $183,800. Prices have increased by 5.2 percent in 2019, and are expected to rise by 4.2 percent in the coming year.

Rental returns: AirDNA states that the average annual occupancy rate for holiday rentals in Haines City is 74 percent, but this shoots up to 93 percent during February and March. The average daily rate is $158, amounting to an average monthly revenue higher than we’ve seen elsewhere is $2,526 per month. During August, this rate hits an average of $3,000 per month.