Parts of Miami have joined San Francisco in insisting that all new build properties must be fitted with solar panels. But what will it cost?

Build a new home in South Miami, Florida, and you’ll be required to spend up to $25,000 (£19,100) on solar panels. The new law was passed this week and applies to newly built homes and existing homes that are being extended by 75% or more.

When you consider that Florida is the size of England and Wales combined yet its highest point is just 95 metres high – the height of a small hill, you can see why rising sea levels are a concern.

South Miami isn’t the first US city to impose such a rule, San Francisco and two other cities in California led the way, but this is the first such green measure on the East Coast. The mayor of South Miami said: “This is about my children and my grandchildren and your children and grandchildren. We are running out of time.” Worries over global warming do make sense in Florida when you consider that the state is the size of England and Wales combined yet its highest point is just 95 metres high – the height of a small hill. Rising sea levels are a concern.

The new rule has not been well received by the building industry, but Building Commissioner Gabriel Edmund said: “The only ones being required to add solar panels is a person who completely destroys a house and rebuilds it. This ordinance is only going to impact a very small part of the marketplace and that tends to be more high end.” It also will not apply in the more popular areas for overseas buyers in Florida, who tend to be nearer to the theme parks around Orlando or on the Gulf Coast. 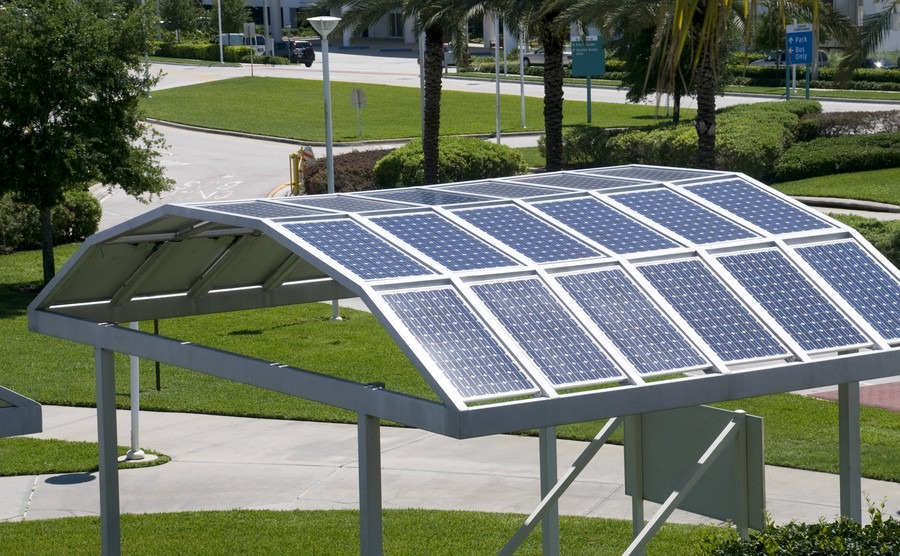 Solar panels at a convention centre in Florida

Although President Trump has been heavily criticised around the world for withdrawing from the Paris Climate Accord, the US in fact leads the way in renewable energy, with non-fossil or nuclear electricity accounting for 5% of energy use, adding up to 65 million tons of oil equivalent (compared to Germany on 31 and the UK on 13). In large parts of Florida the electricity companies are putting up “solar trees” where you can charge up your smartphone, and sun-drenched locations in the Sunshine State such as West Palm Beach have installed solar canopies to shade car parks and generate electricity too.

If you wish to add solar panels to your Florida home, the average cost is around $17,000, but if you pay tax in the US you can often get tax credits to bring that down to as little as $10,000. Don’t forget the ongoing savings in electricity, too. The rough cost for electricity for a US home is $30 per month for a small single apartment, right up to $100 per month for a substantial villa, meaning that it could pay itself off in a few years. Air conditioning alone can cost a lot in the heat of Florida.